The SolarWinds SIEM solution focuses on the management of log files. This isn’t a complete SIEM, but combined with network monitoring, this product can protect your system.
Stephen Cooper 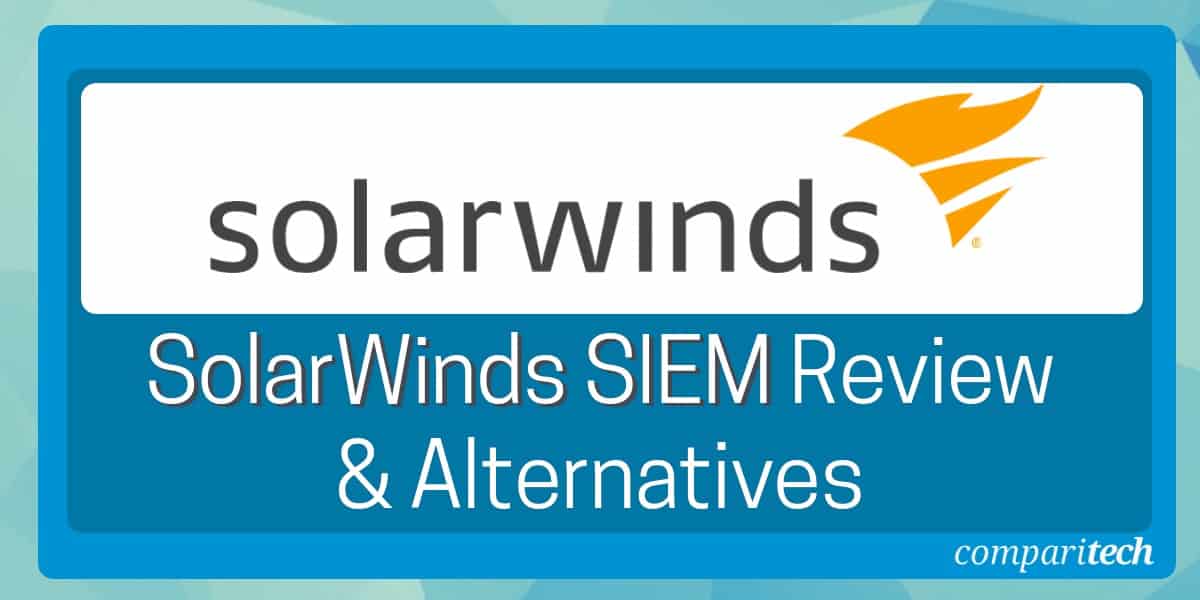 What are SIM and SEM in SIEM?

SIEM stands for Security Information and Event Management. It is a combination of SIM and SEM. SIM manages log files and uses them as a source of data for intrusion analysis; SEM watches live events on the network.

The basic terminology of SIEM is difficult to keep straight when examining the SolarWinds SIEM product because it deals with log files not live network data. The software doesn’t include any live network monitoring, so it can’t be an SEM.

SIM systems have a number of advantages over network monitors because many types of attacks are conducted by stealth and no single piece of traffic can indicate that such an attack is going on. Typically, SIEM systems are meant to hunt down Advanced Persistent Threats (APTs), insider threats, and data loss events.

In an advanced persistent threat, a hacker group gets through traditional boundary defenses and establishes a long-term presence in the system. This could be by acquiring the credentials of a user account. Insider threats occur when an authorized user of the system decides to work against the interests of the business. This might be accidental because a hacker has duped the person into action by impersonating a superior. Other reasons for insider threats are blackmail and a sense of hostility towards the company after failing to get a promotion or being reprimanded.

A data loss event might also be accidental, the result of an employee being duped, or outright theft or malicious damage. “data loss” encompasses both the actual loss of data through deletion of files or the physical damage to servers and also the unauthorized disclosure of data.

One of the main driving forces behind the adoption of SIEM systems by all types of businesses is the existence of data protection standards. While those standards demand the introduction of security measures to protect data, they don’t entirely expect that there never will be a data loss event.

Data protection standards lay down reporting procedures that damaged businesses can undertake in order to inform those whose data has been stolen from their system of the event. Honesty about a breach is almost as important as data security.

A third key element of security protection standards lies in system auditing. Third-party auditing conducted every year aims to confirm that the company has remained in compliance with a particular standard either by blocking all data theft attempts or by declaring an event in a timely manner after it occurs. All three of these data protection standards requirements can be achieved by making full use of log files.

All system messages need to be collected and filed. The directory structure and file rotation methodology of the log message store needs to be a logical and organized system that facilitates the rapid retrieval of data. The log manager should also include utilities to quickly search, sort, and aggregate data.

The SolarWinds Security Event Manager was originally called the Log and Event Manager. As well as gathering log messages generated by operating systems, firmware, and software, the security monitor generates its own log messages that contribute to the monitoring of a system.

The main purpose of the tool is to collect all available log messages, consolidate them by reformatting them into a common format, and then file those messages.

The SEM displays log messages live in the console as they are discovered. This gives the system a near-live view of events on the networks. Those files are then stored in a searchable format and the SEM includes tools to process the data in log files for analysis.

The log file manager provides facilities for instant access to recent logs and archiving for older log files with a method of restoring them whenever they are needed.

The File Integrity Monitor (FIM) built into the SolarWinds Security Event Manager is an essential facility for any business that relies on log file contents for security surveillance. Hackers who are aware of SIEM systems – and all of them are – just need to access log files and delete any evidence of their activities in order to remain hidden. FIM blocks log file tampering and can also protect any other type of file or files stored in specific directories. 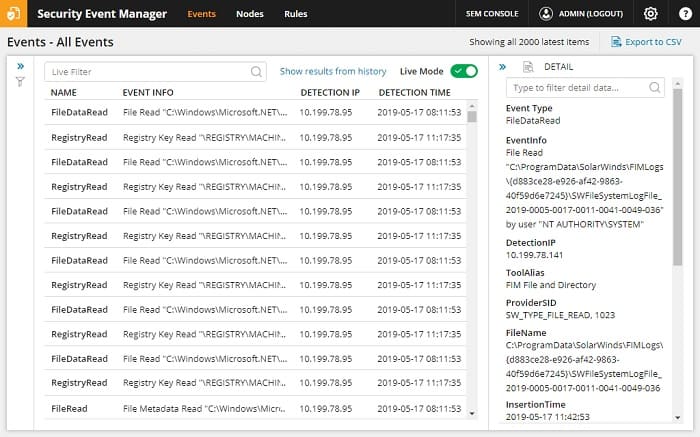 The FIM records the usernames of all accessors to a protected file and logs all access events. Protection of log files is automatic and the FIM also scans for malware activity in files. The service can kill malicious processes that are detected making attempts on file access.

Threat intelligence is a key characteristic in the definition of a SIEM. Log searches have to have a specific purpose to qualify as a security action and a rule base of anomalies to look out for makes those searches meaningful.

SolarWinds supplies a threat intelligence feed periodically over the Internet to all running instances of the Security Event Manager. This stream comes in the form of adjustments to the search algorithms used by SEM to detect suspicious behavior when scanning through log files.

Detection rules transmitted with the threat intelligence updates include backlists of IP addresses and domains that are believed to be the bases of operations used by hackers.

The SEM correlated logs provide source data for the security system to search in relation to the anomalies highlighted by the rules passed with the threat intelligence feed. That data is also available for manual analysis, which is assisted by the data search tools and graphical data representation tools available in the Security Event Manager console. 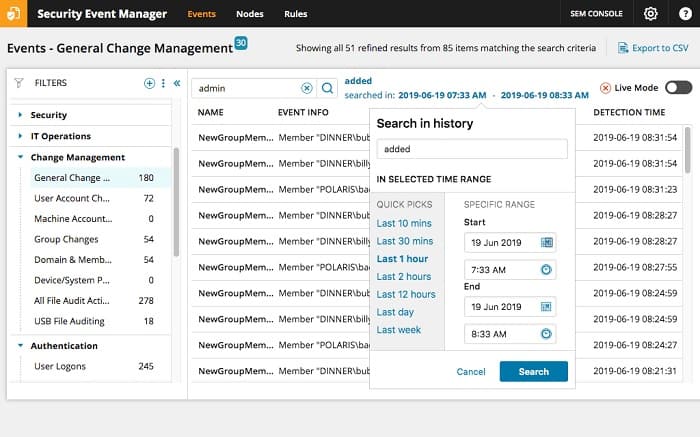 While the automated detection system will spot an intrusion, the log analyzer gives the tech team an opportunity to search back through historical records to look for evidence of that intruder’s initial entry into the network.

Information gleaned from these root cause investigations enable the technical management team to identify system vulnerabilities so they can harden the infrastructure against repetitions of that attempt. Log analysis can also identify a hijacked user account.

The Security Event Manager is able to monitor other security tools, particularly firewalls. The interaction with firewalls is a two-way channel. This enables the SEM to take action on the discovery of an intrusion. The system can alter firewall rules to block access to an intruder’s IP address or block a domain that is the source of infected web pages or emails.

The other main target of automated response is Active Directory. The SEM can be allowed access to suspend user accounts that are identified as the source of the anomalous activity or repeated attempts to make unauthorized access to files. Other responses can be the sandboxing of downloads and the killing of suspicious processes.

The threat response section of the Security Event Manager is called Active Response. As well as interacting with firewalls, this module is able to implement other workflows according to the type of threat that has been detected.

System managers that are wary of automation can reduce the extent of automation down to just a generic email that can be sent as a response to an identified attack. In any case, all alerts are shown in the system console and can also be distributed to key staff as emails or text messages.

The dashboard for the Security Event Manager is accessed through a browser. The main screen of the console shows a busy grid of summary data, mostly represented as graphs and charts. 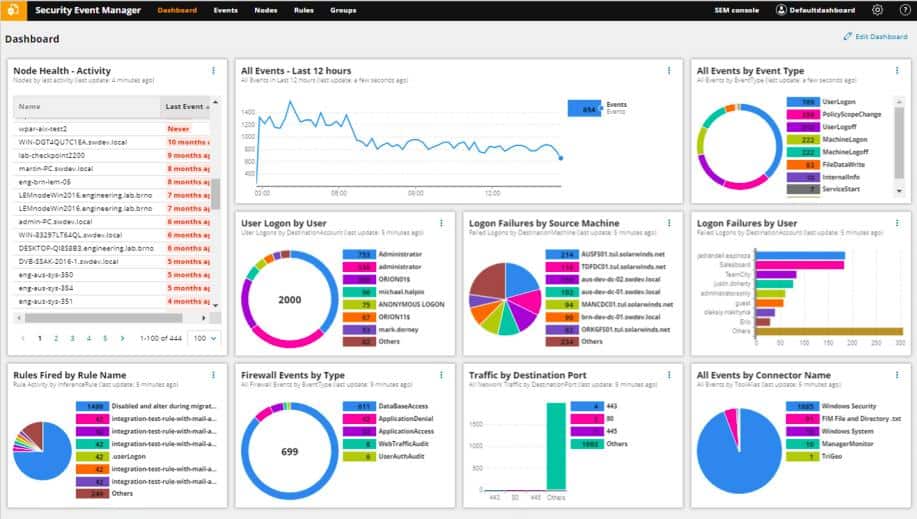 SolarWinds SIEM runs on a virtual machine – it is a virtual appliance. The software can be installed on Microsoft Azure servers and Amazon Web Services (AWS). Those who want to install SolarWinds Security Event Manager will need to run it on Hyper-V or VMWare vSphere.

Remote access to the console is possible with Google Chrome and Mozilla Firefox browsers.

The SEM reports module operates outside of the VM and can be installed on Windows and Windows Server environments.

It is unusual that SolarWinds decided to remove the live network traffic monitoring capabilities of the Log and Event Manager when it created the Security Event Manager. This means that the SolarWinds SIEM isn’t really a full implementation of the classic SIEM definition.

For more detailed information about how SIEM systems work, please see 11 Best SIEM Tools of 2020. If you don’t have time to read that article, but would like recommendations on other SIEM systems, here is our list of the best alternatives to SolarWinds SIEM.