How to watch AEW All Out live online from anywhere

Traveling abroad but don't want to miss any of the action? You need to know how to watch AEW's All Out live online. We’ll explain how to live stream AEW All Out from anywhere with the help of a Virtual Private Network (VPN).
Ian Garland Streaming, Kodi and VPN Expert 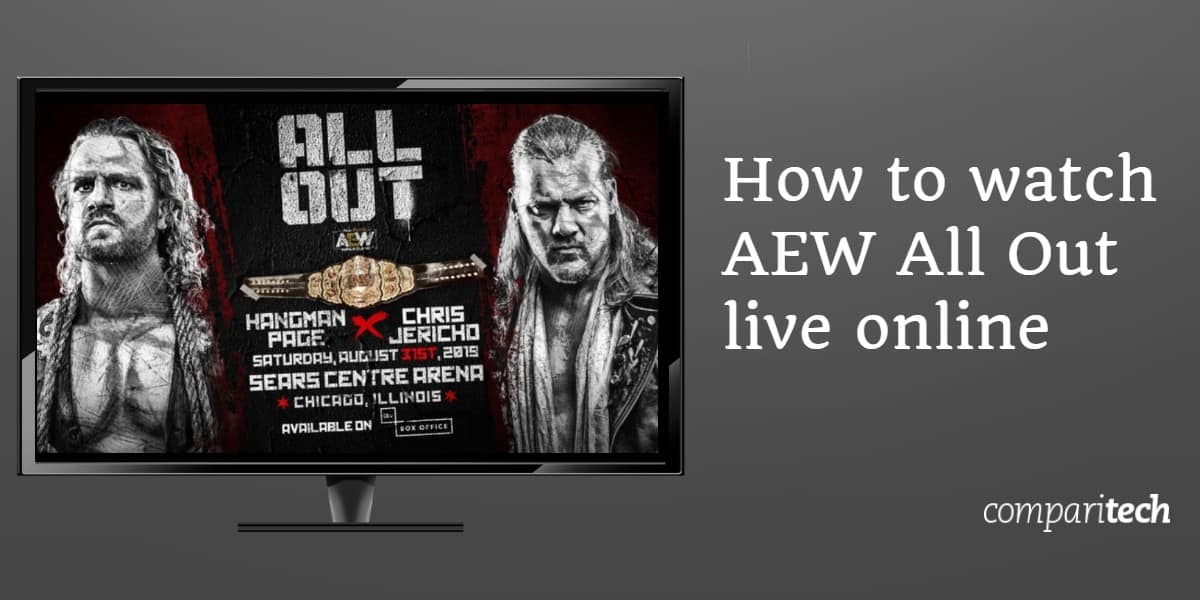 All Elite Wrestling’s All Out will take place at the Sears Centre Arena in Chicago on August 31. Although broadcasters will air live preshow coverage from 8 PM EST, the main event won’t start until 9 PM (6 PM PST / 2 AM BST). There’s plenty to look forward to, including an AEW World Championship match featuring former WWE superstar Chris Jericho. Below, we’ll explain how to watch AEW All Out in the USA, or abroad in Canada, the UK, Australia, or any other country in the world.

You should note that we’ll only be recommending official All Out broadcasters. While this event will likely be available on third-party streaming sites, we don’t recommend using them. Unofficial streams tend to be of a very low-quality, and often, the video is extremely laggy. Further, they can be taken down for copyright violation partway through. You can watch AEW All Out from almost anywhere, anyway, so there’s no need to resort to shady, unreliable streams.

AEW All Out 2019 will only air on region-locked streaming platforms. This means that you’ll need a VPN to watch if you’re outside of a supported country.

Unblocking geo-restricted services from abroad is easy with the right VPN. Just follow the steps below to live stream All Out 2019 from anywhere.

AEW All Out will be broadcast live, and as such, it’s important to make sure your VPN works ahead of time. By running through the steps above, you’ll know of any problems well in advance of the event and will have plenty of time to get help from your VPN’s customer support team.

Best VPN for AEW All Out: ExpressVPN

VPNs allow you to change your IP address, bypassing regional restrictions and letting you use geo-blocked streaming services from abroad. Additionally, they encrypt your internet traffic, which means that any snoopers (such as your Internet Service Provider or employer) can’t see what you get up to online. We particularly recommend ExpressVPN: this high-speed service has over 3,000 servers in 94 countries, powerful security and privacy features, and excellent unblocking ability, so it’s ideal for streaming.

Getting started with ExpressVPN only takes a few minutes; all you have to do is choose your desired subscription length (one, six, or twelve months) and pay. It even accepts Bitcoin in case you’d like another layer of anonymity, although as ExpressVPN logs no personally identifiable information, you can’t be traced either way. Further, ExpressVPN includes a 30-day money-back guarantee, meaning you can stream AEW All Out risk-free and claim a full refund if unsatisfied.

BEST VPN FOR LIVE WRESTLING:ExpressVPN is our #1 choice for watching AEW All Out abroad. It’s fast and reliable, unblocks many popular streaming platforms, and takes your security seriously.

How to watch AEW All Out live online

There are two broadcasters for this event, and which you’ll use depends on where you are in the world. Take a look below to find out how to watch AEW All Out online in your country:

As with AEW’s previous events, All Out will air exclusively on B/R Live in North America. However, this time, there’s a significant difference: although both Fyter Fest and Fight for the Fallen were free-to-watch, you’ll have to pay to stream All Out.

Fight passes cost $49.99 USD or $49.99 CAD, depending on which country you’re in, and your payment method has to be linked to a local address. As such, it’s near-impossible to use this method unless you usually live in Canada or the USA. North Americans can still access B/R Live from abroad by connecting to a VPN server in their home country, though.

Where else can I live stream AEW All Out?

Wrestling fans elsewhere in the world can watch AEW All Out live on Fite. This service will be showing the press conference and weigh-in for free at 8 PM EST (5 PM PST / 1 AM BST) on August 30. However, an All Out fight pass costs $19.99 USD to watch in other countries or £14.99 in the UK. This event will be available in both English and Spanish, but you’ll have to specifically purchase a Spanish-language pass.

This service is available worldwide, although it won’t broadcast All Out everywhere. For instance, viewers in the US and Canada will have to watch on B/R Live instead. While Fite still hasn’t announced which countries it’ll be showing All Out in, prior events were broadcast across Australia, the UK, and Europe, and there’s no reason to believe things will be any different this time around. This means that if you purchase a fight pass, then travel to North America, you’ll have to connect to a VPN in order to watch All Out online.

Which wrestlers are the ones to watch?

The real stars of this event are Chris Jericho and Kenny Omega. It’s unclear whether AEW is looking to draw in new viewers by making Jericho the first AEW World Champion, or whether they’d prefer to rally fans around Adam Page, a relatively new addition to the roster. Both are experienced wrestlers, though, so whoever wins, it’s sure to be a fun match to watch.

Meanwhile, Omega is set to face off against another WWE alumnus, Pac. Originally, he was scheduled to fight Jon Moxley, although due to a serious elbow infection, this wasn’t possible. Moxley had previously claimed that Omega isn’t as serious as he’d like to appear in the Road to AEW All Out, This could well be a bid to set up a new rivalry ahead of the launch of AEW’s weekly TV show which is coming soon to TNT, and as such, we’d be surprised if Moxley doesn’t continue to play up his heelish tendencies when he makes his return.