The Beginner’s Guide to IP Tables 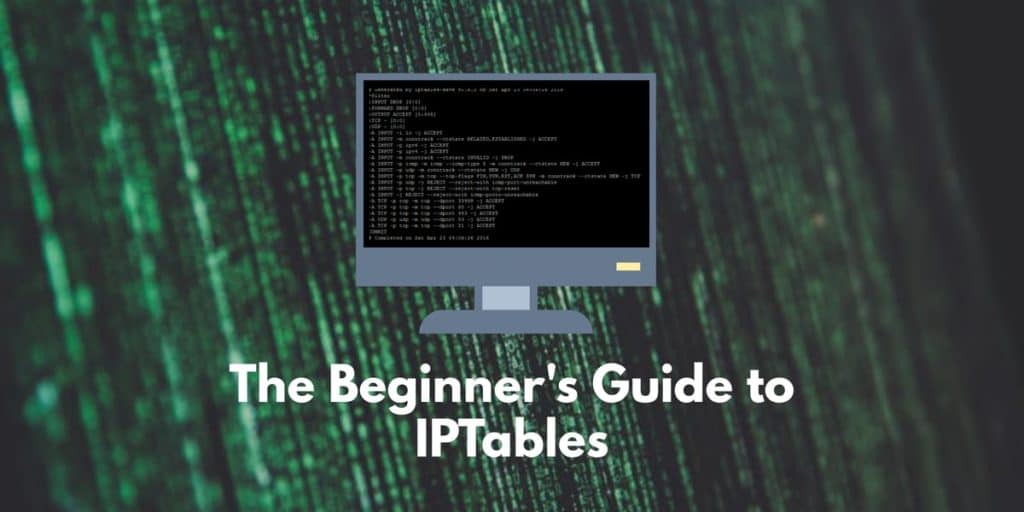 IPTables is the name of a firewall system that operates through the command line on Linux. This program is mainly available as a default utility on Ubuntu. Administrators often use the IPTables firewall to allow or block traffic into their networks. If you’re new to IPTables then one of the first things you need to do is update it or install it is using the following command:

While users who are new to command line interfaces find there is a learning curve attached to IPTables, the utility itself is simple enough to use. There are a range of core commands that act as your bread and butter for controlling traffic. That being said, you need to be very careful when making changes to IPTables rules. Entering the wrong command can lock you out of IPTables altogether until you address the problem within the physical machine.

In this article, we’re going to provide you with a basic guide to IPTables and introduce you to the fundamentals. Before we get to the heart of IPTables you need to make sure that you have a VPA running Ubuntu 16.04 and a local machine with an SSH client. If you already have these then it is time to begin.

One of the fundamental concepts to come to grips with in IPTables is that of chains. A chain is essentially a rule. The filter’s tables have three chains you’ll encounter on IPTables; INPUT, FORWARD and OUTPUT.

This will show the following:

This information tells you exactly what your chains are configured to do. In the example, the input, forward and output chains have been configured to accept traffic. These settings are a good starting point as they don’t block any connections that you might want.

However, if you’re find that your policies aren’t accepting connections then you can enter each of the following commands to accept all connections:

Once your defaults are aligned to accept all connections, you can control access to IPTables by blocking IP addresses and port numbers. This allows you to specify which connections you want to block rather than blocking everything by default.

If you’re working with particularly sensitive information then you can configure your defaults to automatically block all connections. This way you can use IPTables to pick individual IP addresses that you want to allow. To do this you need to input the following command:

The majority of users will be better off accepting all connections but it is worth remembering if you’re working on a high security server. 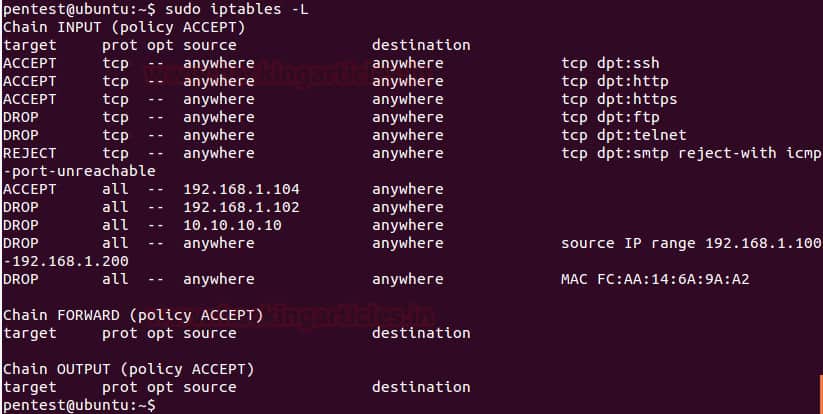 Once you’ve configured your default chain behaviour it’s time to configure individual connections. This is the point where you configure what is referred to as a connection-specific response. This essentially tells IPTables how to interact when connected to an IP address or port. These responses are as follows; ACCEPT, DROP, REJECT.

As you can see in the image above, the user has defined chain rules to allow, drop, or reject the connection based on the requirements. Below is a description of what each response entails:

How to Allow or Block Connections

There are many different ways to block or allow connections depending on your settings. The examples below are using the covert blocking method of using Drop to drop connections without any interaction. iptables -A allows us to add additional caveats to the rules established by our default chain settings. You see how to use this command to block connections below:

Blocking a range of IP addresses:

Note that the ‘ssh can be replaced by any protocol or port number. It is also important to note that the -p tcp segment of the code is used to refer to whether the protocol you want to block is using UDP or TCP.

If the protocol is using UDP then you would enter -p udp instead of -p tcp. You can also block all connections from IP addresses by entering the following command:

Most of the protocols you encounter require communication to go both ways in order for a transfer to take place. This means that transfers are made up of an input and an output. What goes into your system is as important as what comes out. Connection states allow you to mix and match between two-way connections and one-way connections. In the example below, the SSH protocol has blocked SSH connections from the IP address but permits ones to the IP address:

Once you’ve entered a command to change connection states you need to save your changes. If you don’t then when you close the utility your configuration will be lost. Depending on the distribution system you’re using, there are a number of different commands you can use:

Remembering to use these commands is vital because it will eliminate the hassle of having to configure each time you load up the utility.

Just as important as being able to save your rules is being able to delete them. If you make a mistake or simply want to eliminate an old rule then you can use the option –D command. This command needs to be combined with the number of the rule that you enter. The number tells IPTables which rule is to be deleted. For example, if you were to enter:

Then the 10th rule you configured would be deleted.

If you want to clean house and remove a range of rules then you can use the -F command. You can do this by entering the following:

This will clear the entire set of rules and flush your IPTable.

That concludes our IPTables tutorial. As you can see IPTables is a versatile tool for blocking and allowing traffic on Linux distributions. Using the utility effectively involves setting up your default configurations effectively and building additional rules on top of that. The default configurations will allow you to outline your broad traffic intentions to allow or deny traffic; the rules will allow you to structure your approach with regards to IP addresses, ports and protocols.

We’ve only scratched the surface with IPTables potential, and there are a ton of different commands that you can use to decide how you experience the traffic on your server. However, we recommend that you get the basics down before you start off with other commands. For example, you’ll want to get your head around basic chains rules before committing to anything more specialized.

Once you’ve become accustomed to how IPTables works then you can start incorporating even more rules to customize your experience. In doing so you’ll be able to specify exactly what kind of connections you will allow with much greater precision than ever before.