Application security testing is essential for apps under development, and those already live. We explain the process.
Stephen Cooper 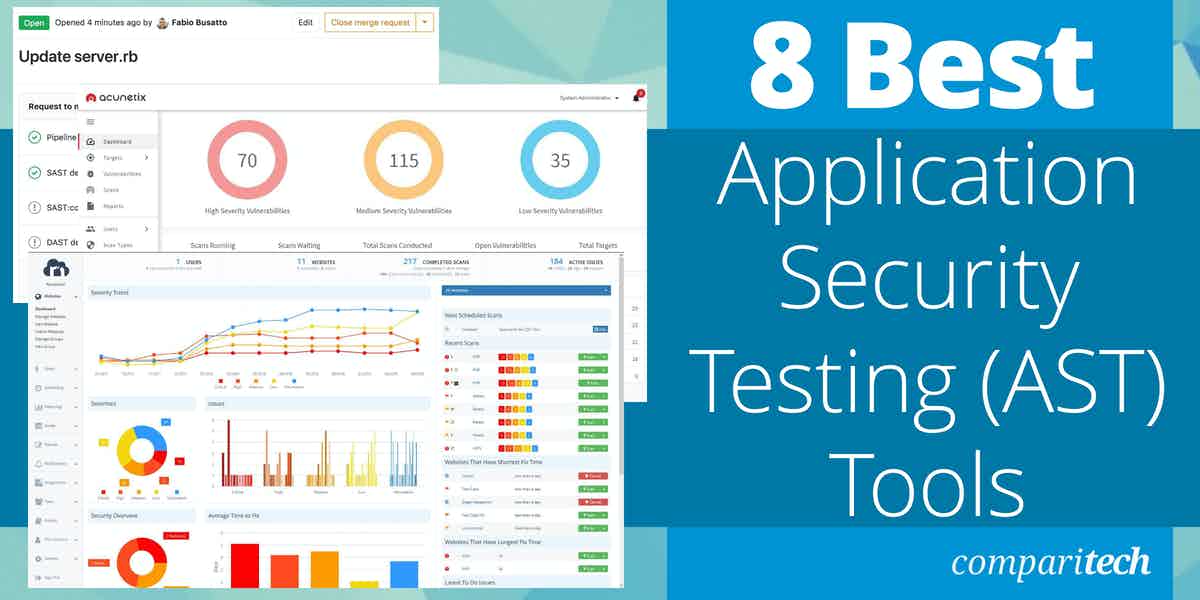 There are several strategies for Application Security Testing (AST), and it can be challenging to work out which type you need for your enterprise. The first step in this task is to identify each kind of AST.

Here is our list of the eight best applications security testing tools:

DAST is the only method that the users of commercial software can deploy. Without access to the code of an application, You are left with one option – run the software and test scenarios. This is a type of penetration testing or vulnerability scanning. The testing system starts with a list of known vulnerabilities and watches the operations of the application to see if that weakness exists.

SAST is a little like a QA check on code before it moves into acceptance testing, and it is part of unit testing. Like the DAST system, the SAST package has a list of weaknesses to look out for when reading through the program.

So, SAST is used for code verification, and DAST is used for acceptance testing. Businesses that produce commercial software need to make all efforts to ensure that the products do not include security weaknesses. This would consist of those companies that run SaaS platforms.

Software producers need to catch errors and weaknesses early to minimize the amount of rework that has to be done to fix the detected problem. So, the development team would use SAST. The marketers of that software and the technicians who will be supporting it once it is live need to perform DAST exercises to ensure no security problems in the system before it is made available to customers.

So, those businesses using both SAST and DAST would benefit from an application security testing package that performs both types of tests – an IAST system.

When looking for an application security testing system, you need to look for services advertised as SAST, DAST, or IAST.

What should you look for in an application security testing tool for your business?

We reviewed the market for ASTs and analyzed tools based on the following criteria:

With these selection criteria in mind, we looked for a range of AST systems suitable for all types of businesses. 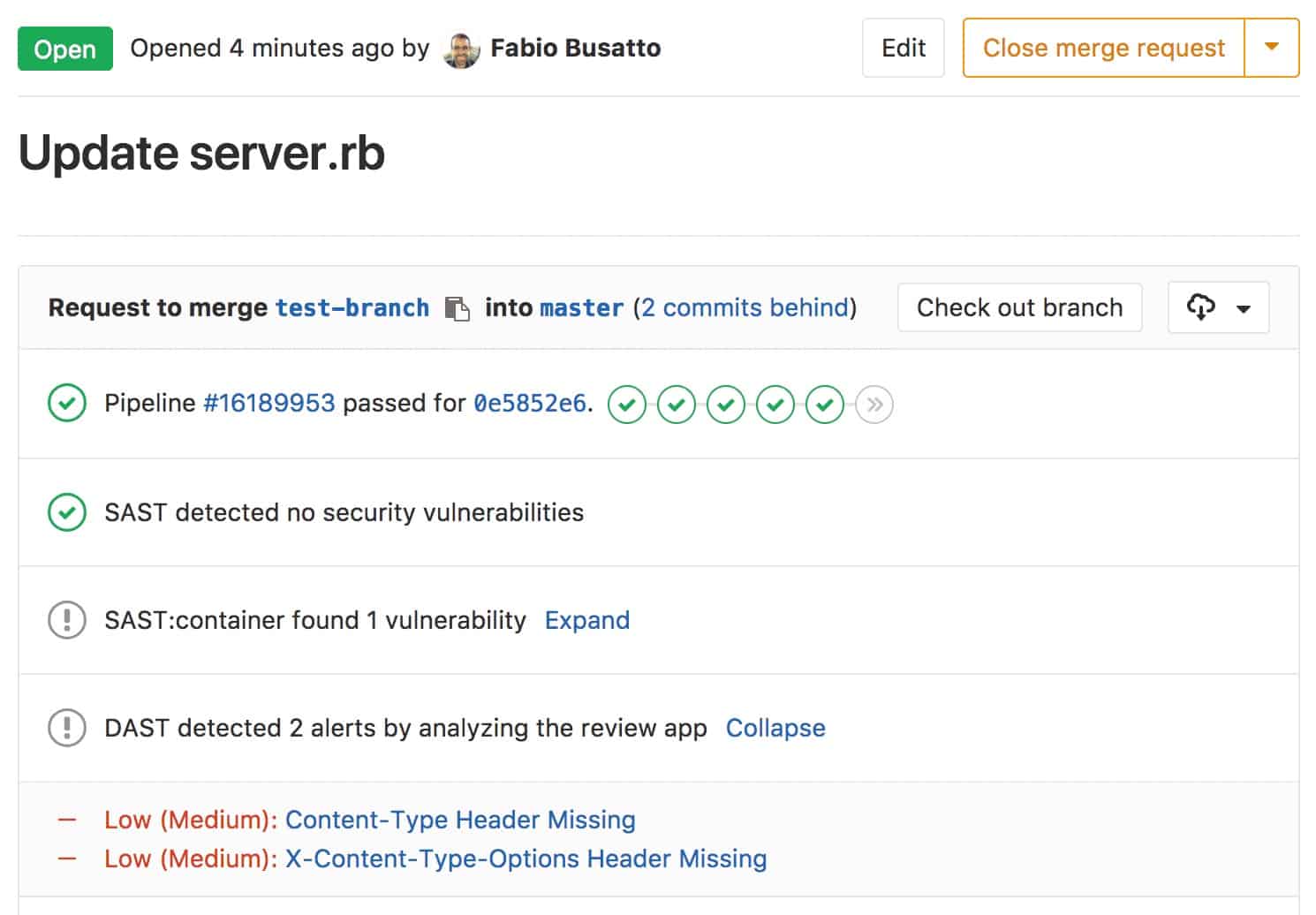 GitLab is a source code management system that is delivered from the cloud. The package is available in three plans, and the lowest of these is Free. Unfortunately, that base plan doesn’t include many project management features, and you have to go up to the top edition, Ultimate, to get application security testing.

The DAST functions of GitLab Ultimate are available on demand. Still, they can be integrated into the development platform and scanned every time code is committed to the repository. This gives feedback with actionable insights into the security weaknesses in the code, enabling developers to fix the problems quickly. This service runs within the CI/CD framework included with GitLab Ultimate.

GitLab Ultimate is also available for self-hosting on a Linux server or a cloud account. The package is offered on a 30-day free trial. 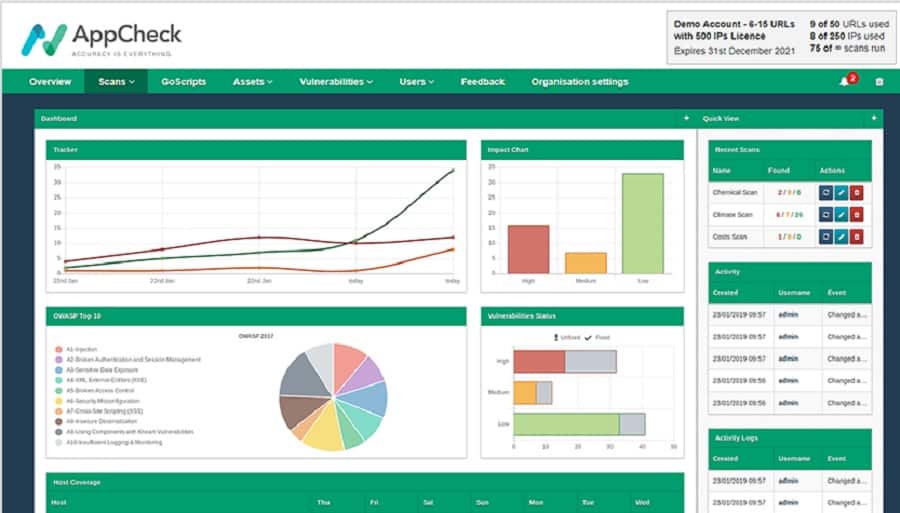 AppCheck is a SaaS platform that offers application security testing services. These are automated tools, but a penetration testing consultancy developed them, and they also offer their services for human-driven testing. However, penetration testing from a team is an expensive exercise and not intended for regular app testing.

The AppCheck automated testing services perform a mix of both DAST and SAST to create an IAST package. The tester can be plugged into a CI/CD workflow, and results can be channeled through project management tools, such as JIRA and Team City.

The AppCheck system is cloud-hosted, so there is nothing to install to use the service. However, you can test the service by accessing a free scan at the AppCheck website.

Invicti is a cloud platform that offers DAST. The company also provides an IAST package, which includes SAST code checking, but there isn’t a separate SAST-only plan available. Instead, customers can opt to get the code for the package and run it on their servers.

Effectively, the Invicti system is a vulnerability scanner specializing in checking Web applications’ operations. The system can be launched manually or plugged into a workflow to integrate it into a CI/CD pipeline.

This testing system looks at operating modules and uses AI procedures to identify potential security issues, which could lie with cohesion between functions. Hence, it needs to work while the applications are running. Other implementation options set the scanner through a standard CVE list of weaknesses.

Invicti offers a range of options, including a vulnerability scanner, a unit tester, and an integrated tester for a CI/CD pipeline. As well as scanning for known vulnerabilities, this package can use AI to spot potential security loopholes in code. This is a great support system for developers and will improve programmers’ knowledge of avoiding creating insecure code.

There are three editions of Invicti. One is a straightforward vulnerability scanner, while the other two are suitable for DevOps teams. The on-premises version runs on Windows and Windows Server. You can assess Invicti by accessing a demo account. 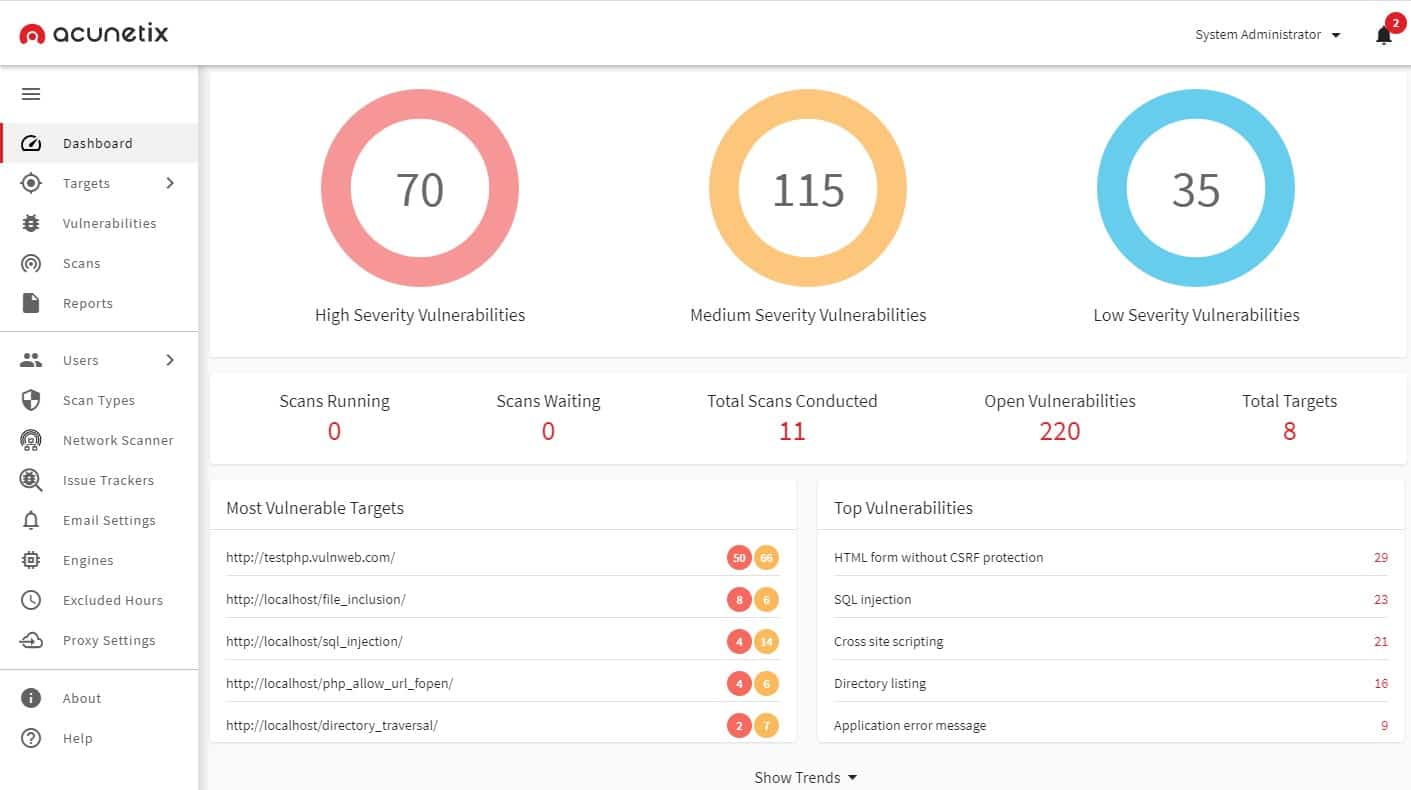 Acunetix offers a vulnerability scanner and an IAST tool to integrate into a CI/CD pipeline. The IAST discovers all assets and then performs dynamic scans on them. Once a vulnerability has been identified, it zooms in and applies static scans to the code to define precisely which line needs to be fixed.

The Acunatex system scans for more than 7,000 vulnerabilities. It performs software composition analysis (SCA), which identifies the open-source elements in the application dependency chain and assesses each of those packages. The SCA will spot any open source code that is outdated and can be replaced by newer versions. Static analysis can scan JavaScript, PHP, and .NET frameworks code.

Acunetix is delivered as a cloud service, but you can get the software and run it on your servers. The system will install on Windows, macOS, and Linux. But, first, access the demo system to assess Acunetix. 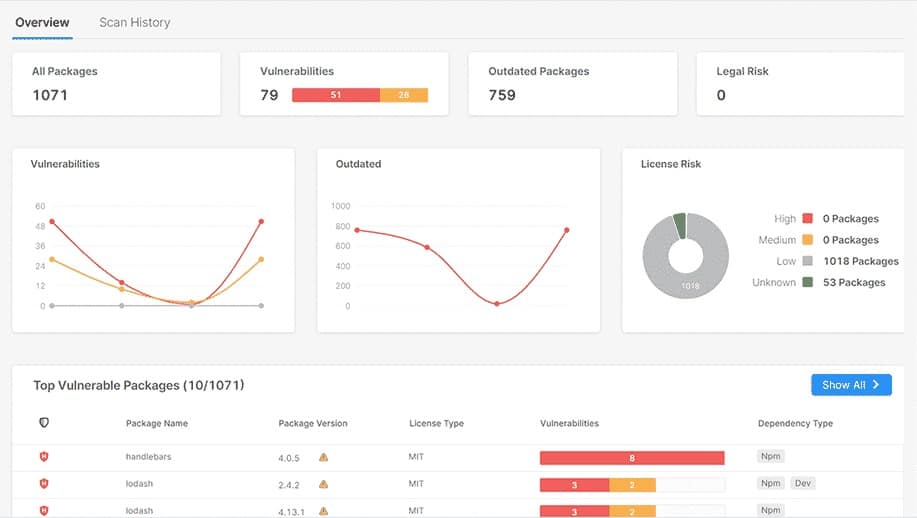 Checkmarx is a platform that delivers tools for developers and managers on app creation projects and systems for ongoing application verification that IT Operations technicians can use. The Checkmarx stable includes SAST for code checking and IAST for integrated testing in a CI/CD pipeline.

The automated testing process will highlight security weaknesses in new code and register to rework with issue trackers, updating your project and team management workflows to reassess delivery timelines.

The integrated development package of the IAST system from Checkmarx has a high price. Therefore, it will be more attractive to large software development organizations than small businesses and startups. The company also offers security coding training for programmers and a development framework called KICS. 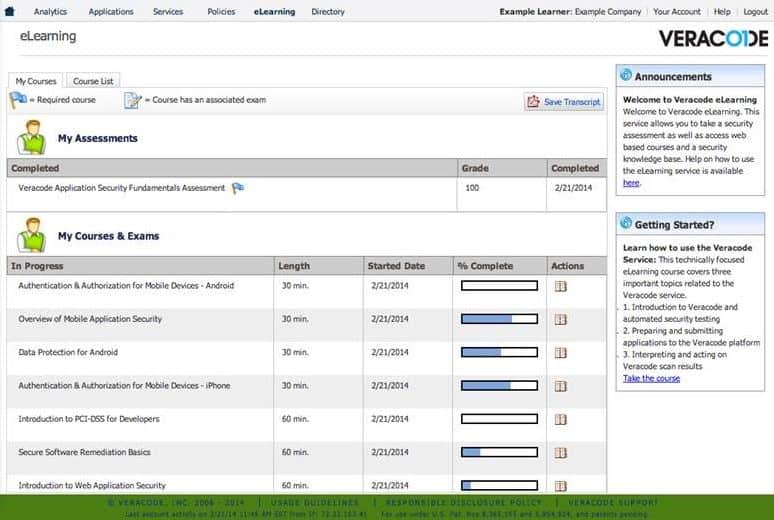 Veracode offers a cloud platform that includes application security testing tools for development teams and IT Operations technicians. The platform consists of a discovery module that will let the buyers of Web and mobile applications discover all of the backend services that support their new software. Testing tools can be launched on-demand, on a schedule, or as part of a workflow.

Veracode provides a scripting language that enables customized testing and an automated DAST service. Developers get SAST, which can be launched on-demand or integrated into respiratory storing processes. In addition, software composition analysis lets system designers and IT operations technicians check through open-source modules for outdated code.

The Veracode cloud platform is straightforward to use. Both for on-demand testing and scheduled checks, the user just has to enter a URL in the screen of the testing dashboard. Veracldoe also offers the services of a penetration testing team. You can get a demo of the DAST system at the Veracode website. 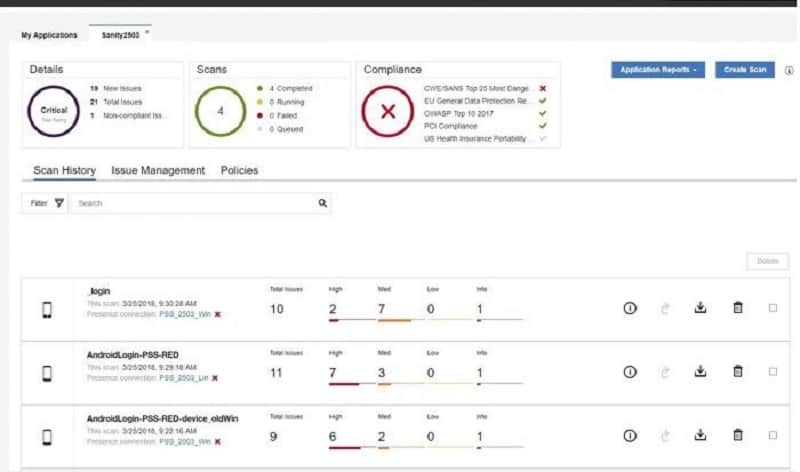 AppScan is offered in four editions that provide SAST, DAST, IAST, and SCA for developers and IT operations teams. Additionally, this service has options for on-premises hosting and a SaaS package.

The DAST service is called AppScan Standard, and it is a software package that you host on Windows Server. This package is automated, and it can be run on a schedule by IT Operations teams or integrated into a CI/CD pipeline. AppScan Standard is available for a 30-day free trial. When used for live application testing, the service operates as a vulnerability scanner that includes searches for the OWASP Top 10. The results are reported with a severity score for resolution prioritization.

AppScan Source is a service for programmers. This is a SAST service, and it includes AI interpolation to spot incremental steps that could result in security weaknesses. This service catches design faults early, thus, saving development costs. This is also an on-premises system for Windows Server. The AppScan Enterprise edition includes all of AppScan Standard and AppScan Source features. This plan is available for a 30-day free trial.

A SaaS version of AppScan Enterprise is available, and that is called AppScan On Cloud. 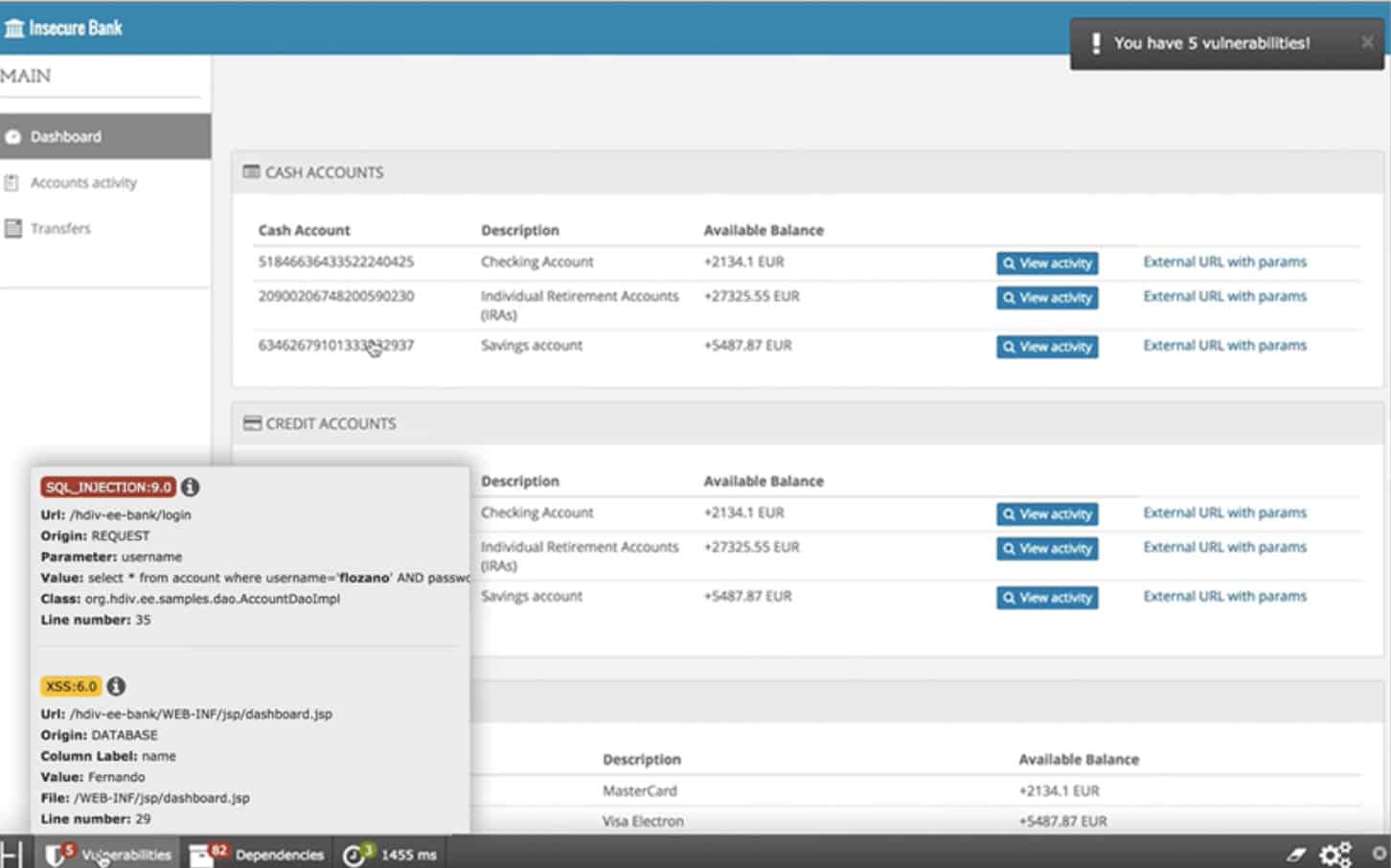 Hdiv Detection identifies the connections between Web applications and scours for all supporting modules. This IAST package combines code analysis and vulnerability scanning through a proprietary methodology called the runtime dataflow technique.

This system includes SAST processes, and it is better suited to DevOps environments because the package requires access to code to complete its scans. This is a cloud system, and it involves the installation of an agent on your application server.

This is an excellent, IAST helpful solution to businesses that produce Web applications. In addition, you can access an online demo to assess the service.