WAN optimization allows for the creation of an efficient and secure network. We look at how you can optimize your WAN using some of the best optimization tools.
Liku Zelleke Network configuration, optimization, and security expert 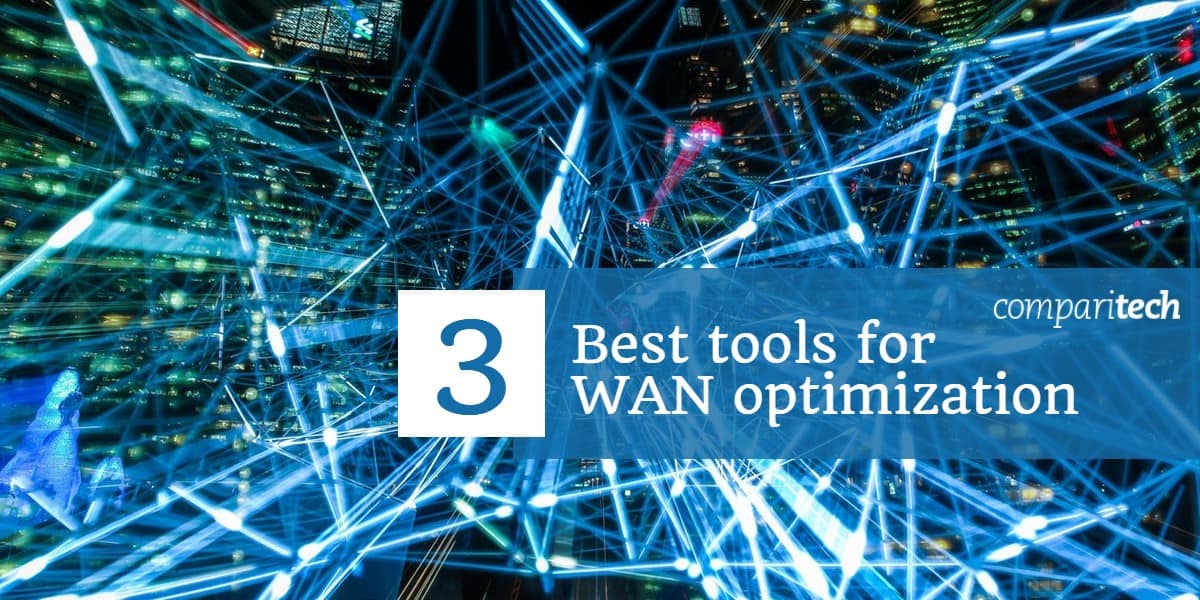 Modern network designs allow for the rapid transfer of data across great distances. Today, organizations with branches in different locations can communicate and collaborate with their remote staff at speeds that would make one believe they were all in the same building.

Wide Area Networks (WANs), when configured correctly, can carry data across at impressive speeds. This is especially true when WAN optimization is regularly carried out and continuously maintained on the network. However, when they slow down (and they all do so) administrators can use WAN optimization tools to quickly and easily alleviate the problem.

What is a WAN?

A WAN is defined as a computer (or telecommunication) network that allows for a connection of devices that are spread over a large geographical area. This connection between the distant devices is usually done with the help of a leased telecommunication line.

Although this definition of a WAN might suggest that it connects computers and gadgets it, in fact, connects two LANs (Local Area Networks) over the internet. The individual devices in one location are grouped together behind a LAN. When data is sent through a WAN, the origin LAN connects to the internet through a gateway router that controls the access (both in and outwards-bound) and on to the access point of the destination LAN that could literally be on the other side of the globe.

What is WAN optimization?

Now, over time (and after frequent usage), the traffic on a network starts to get congested. The main reasons for the slowdown include:

Handling these issues to make sure data packets traverse a WAN intact, securely, and with the least amount of time is considered to be optimization. The end result is a WAN that is as efficient as it could possibly be.

Why optimize a WAN?

An organization that lets its network connection run unmonitored won’t have much connectivity after a short while. Optimization of WANs needs to be done so as to:

For a WAN to run like a well-oiled machine it needs to be configured correctly and requires occasional tune-ups as well as constant monitoring. Otherwise, only bad things like network hacks, overloads, and crashes can be expected from a neglected WAN.

Apart from the ones we have seen above, other reasons why a WAN network – especially a corporate one – would need to be optimized are because:

WAN optimization makes it easy for data packets to travel efficiently and eliminates unnecessary congestion. As file access and storage speeds increase, employees become more productive while applications run at optimal speed. The end result will be a WAN that becomes a business enabler instead of a hindrance to its users.

Recklessly spending money on buying ever-growing amounts of bandwidth is never a solution; especially if optimization has never been attempted. Instead of directly jumping into buying more bandwidth a business should opt for a more sensible option: optimizing its WAN.

Although the global price of bandwidth connections keeps decreasing, it still is an expensive purchase to make. This is especially true when it comes to meeting corporate connectivity requirements that demand fast and reliable internet connections.

Another reason why a business would want to optimize its WAN is to reduce latency to a minimum. This has a significant effect on the communication between two offices that have a large distance between them. Implementing a WAN optimization strategy would improve the data transfer speed and would allow the business’s remote workers to connect and collaborate on projects with ease.

Considering the points we have just seen, it would be safe to assume that WAN optimization is a process that needs to be taken seriously to guarantee a reliable communication medium.

A WAN’s performance levels diminish over time due to two main reasons:

As we have mentioned earlier, paying for more bandwidth is almost never the solution to the subpar performance of a WAN. The important thing to remember here is that although a bigger bandwidth means there is a larger overall tunnel for all data to pass through, it still doesn’t directly affect the rate of transfer as each packet transmission is received through a dedicated channel within that tunnel. This channel is known as the TCP window size.

For a WAN to be used optimally (by taking both the bandwidth and TCP window size into consideration), an administrator would need to know the optimal TCP window size (TWS) that would deliver packets at the highest possible speed. The formula used to calculate TWS is:

Using this formula, and taking an example where a WAN connection with a 1GB bandwidth and a latency of 30 milliseconds, we could find the TCP window size as follows:

Now, if the administrator were to configure the WAN to have a 3750KB TCP windows size, there would be 1Gbps throughput on the network – the optimal speed.

Latency is defined as the time it takes for a packet to travel from its source to its destination and for the reply (indicating that it is OK to send the next packet) to come back.

When a file is sent from a source to a client server, it is broken down into packets. The packets are then sent one at a time. After each one has been sent, the source server waits for a reply from the destination server stating that it has received it and that the next one can now be sent. This process repeats itself until all the packets of a file are transferred. Sending a file that is about 50MBs could generate up to 3,000 back-and-forth requests. As can be imagined, latency time will be greater when:

A WAN administrator should always keep an eye on the network’s latency and try to keep it from decreasing the Maximum Possible Throughput (MPT) of the network. A WAN’s throughput shows the average rate of successful packet delivery over the network. It is calculated using the formula:

If, for example, an administrator was responsible for a 1GB WAN with a latency of 30ms and a TCP window size of just 64KBs, the maximum throughput would be:

This means the maximum throughput of the network is 17 Mb/s. Now, to improve the WAN’s speed, the administrator could either increase the TCP window size or reduce the latency.

How is WAN optimization done?

Several methods can be used in WAN optimization. These include:

There are two types of WAN accelerators: software and hardware. The hardware optimizers are called “WAN optimization appliances” and the software versions are termed “virtual appliances.”

The benefit of introducing a new piece of hardware to perform WAN optimization include:

Despite the benefits of installing standalone WAN optimization appliances for WAN monitoring and optimization, many systems administrators still prefer to use virtual appliances. Possible reasons for this preference include a familiarity with the operating system of existing servers and a wariness of the requirement to learn a new command structure and firmware commands of a supplementary box.

Software WAN accelerators look cheaper on paper than appliances because they don’t include the expense of buying new hardware. However, you should recognize that all applications installed on your servers contribute to the load of its processors and may cause you to expand your server hardware. All software incurs hardware costs.

Our methodology for selecting a WAN optimization tool

We reviewed the market for WAN optimization software and analyzed tools based on the following criteria:

With these selection criteria in mind, we found WAN optimization tools for all budgets.

This Texas network technology company offers the best network enhancement and optimization solution on the market – the SolarWinds Orion Platform. The platform is really a suite of six tools:

The main tool that administrators use for WAN optimization is the Network Performance Monitor (NPM). Now, before looking into its details, it is worth mentioning that the winning feature in this particular tool is that it gives network administrators a bird’s-eye view of their whole network. Also, its installation is quite easy and can be done in a short amount of time. Once all networks have been added to the tool, monitoring their performances is a breeze. 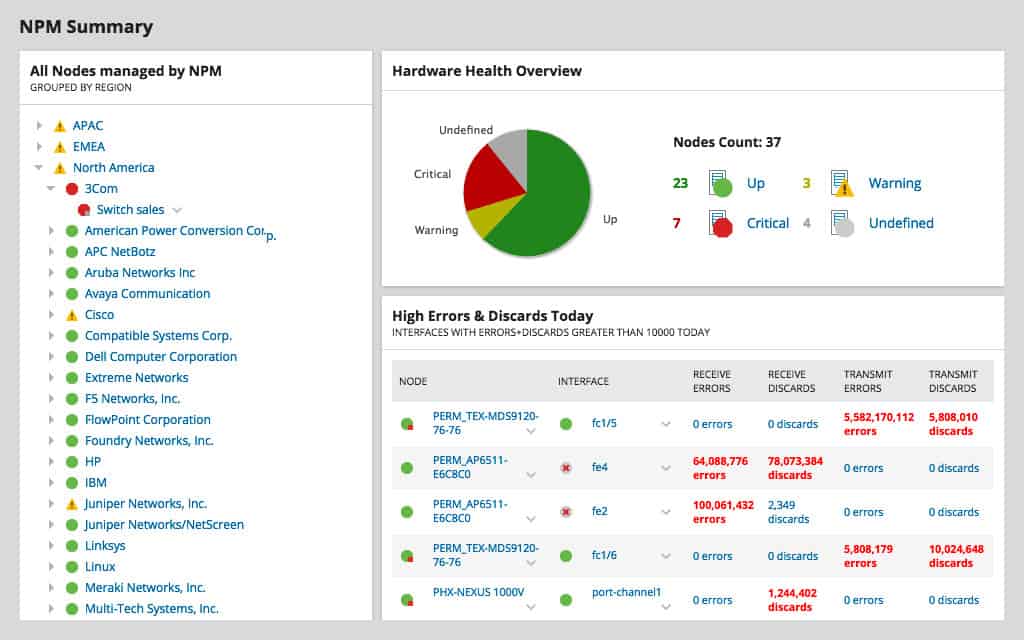 The NPM’s web interface allows for a small footprint on the network it is monitoring, but the performance delivery is nothing less than impressive:

As can be seen, SolarWinds’s Orion NPM isn’t in itself a tool that directly contributes to WAN optimization, per se. But, it is, in fact, an ‘efficiency monitoring’ tool that allows network administrators to resolve performance issues by correctly, and quickly, identifying them.

You can check out SolarWinds Network Performance Monitor yourself on a 30-day trial.

Riverbed Steelhead SD, too, is one of the more popular WAN optimization tools out there. In this case, one of its main attraction points is the fact that it tackles the task by directly handling issues related to bandwidth congestion and latency. Another selling point is that Riverbed can resolve the most complex of issues without itself proving to be a drain on the network whose performance it is supposed to improve.

Riverbed Steelhead SD is also liked by its users because it is a “set-and-forget” WAN optimization tool that requires all of just 15 minutes to set up. Once the appliances have been placed immediately behind the routers of the sender and recipient networks (a reason why they are known as “bookend technologies”), they are ready to start optimizing the transmissions that go through them.

Delving deeper into the methods the appliances use to optimize a WAN, we find: 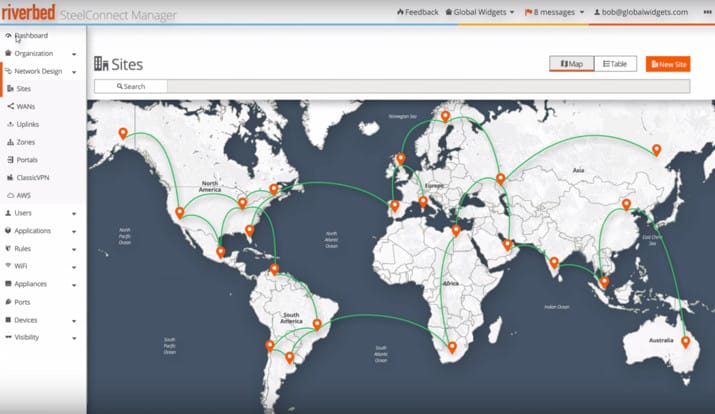 This WAN optimization solution actually consists of two parts. The first is a dedicated appliance that tackles latency and bandwidth issues and includes an in-built gateway and firewall for easier connectivity. The second part is the management portal that allows administrators to design, deploy, and manage complex WAN networks.

Mention the word “network” to anyone who has a background in the IT industry and the first company or brand that comes to their mind would most likely be Cisco. Since its modest beginnings in 1984, this San Francisco-based technology conglomerate has managed to conquer the networking world. Today, the company’s equipment can be found on networks and in server rooms across the globe.

It, therefore, shouldn’t come as a surprise that Cisco too has one of the best suites of WAN optimization tools on the market. Its particular suite includes four tools:

It is clear that the main products from the Cisco suite that help with WAN optimization are the WAAS and the enhancement that comes with Akamai Connect. These two products come together to directly tackle latency, dropped packets, and bandwidth congestion.

On a closing note let us part with some advice: every WAN connection needs to be optimized at various stages of its life cycle. While there is a cost involved in the optimization process, the end result always justifies all the costs.