The difference between straight through cable, crossover, and rollover cables

The different formats of network cables can be confusing. We show you a very simple way to work out the type of cable you need.
Stephen Cooper 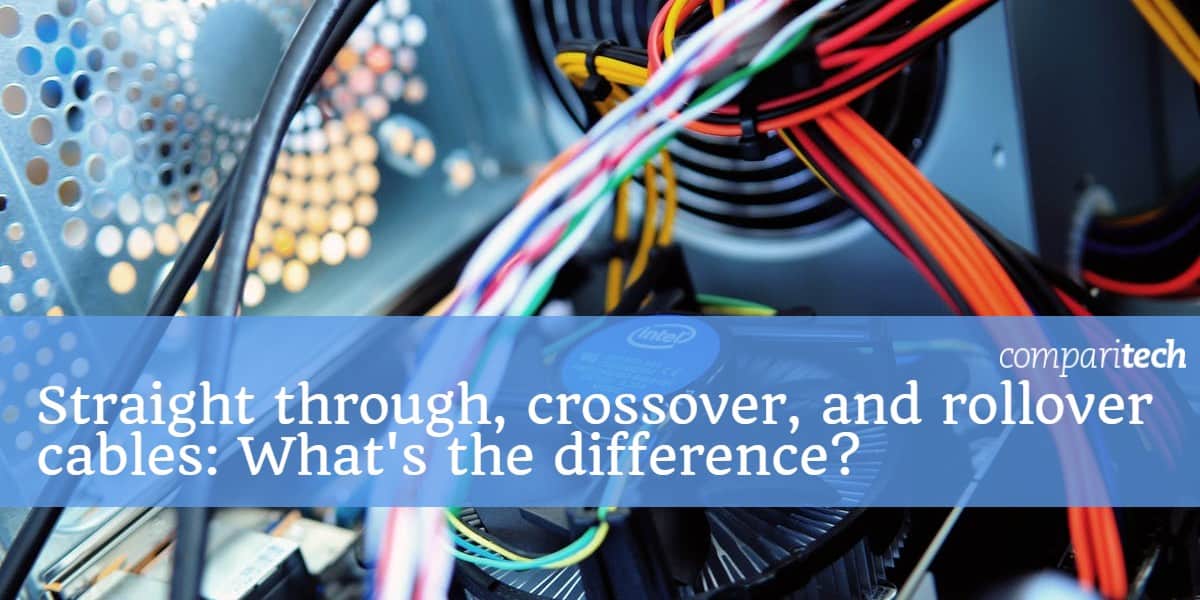 The most common form of network cable is called “unshielded twisted pair” (UTP). This cable format is used for the Ethernet wiring standards, which are managed by the Institute of Electrical and Electronics Engineers (IEEE). These wiring standards are referred to by the code 802.3. The Ethernet standards are open to anyone to read and they include specifications of cable configurations and the types of connectors used to plug cables into devices. What we conventionally know as a network cable is an 802.3 specified cable for Ethernet networks.

The distinction between a straight through, crossover, and rollover cable comes down to the way that the connectors on each end are wired. A UTP cable contains eight wires. Each individual wire is covered in a colored wire plastic coating and the entire bundle is encased in an outer shell.

In the twisted pair configuration, the eight wires within the cable are split up into four pairs. The two wires in a pair are twisted around each other. This treatment protects both wires from interference. The pairing is easy to spot because one of the two is encased in a coating of solid color while the other is white with a spiral stripe in the pair’s color. This pair’s colors are:

The conventional name for the connectors on the ends of Ethernet cables is RJ-45. This is not the proper name however, as the RJ-45 is a discontinued format of telephone wire connector. The proper name for these connectors, according to the 802.3 wiring standards is “8P8C“, which stands for “eight positions, eight connectors.” However, don’t make a fuss if you hear a network technician call the connector an RJ-45. This is the way everyone names these plugs and if you make a big thing about it, you’ll be sitting by yourself in the break room at lunchtime.

There is a standard sequence for those colored wires in an 8P8C connector. It is not entirely logical. The order is as follows:

It doesn’t really make sense that all of the pairs go into the connector next to each other except for the green pair and there is no real reason why the blue stripe/solid order is reversed. However, this is the wiring standard and you have to follow it because the socket the connector plugs into is wired internally to accept the signals carried by the color-coded wires in this specific order.

The connector layout listed above is specified in the standard EIA-568B.This was defined by the Electronic Industries Alliance, hence the “EIA.” The standard is now managed by the Telecommunications Industry Association, so the pinout is also referred to as TIA-568B. The American National Standards Institute also recognizes the standard and so you will see it called ANSI-568B. The layout of the connector in the EIA-568B standard is illustrated below. 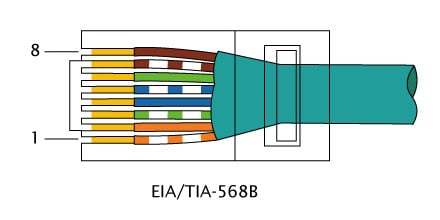 The main wiring standard for Ethernet cable connectors is actually EIA-568A – the EIA-568B layout was made available as an acceptable alternative. However, the B version has been implemented within the industry as the main standard. The EIA-568A standard has a slightly different layout:

An illustration of the EIA-568A pinout is shown below. 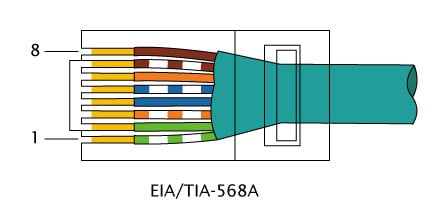 It doesn’t matter which of these standards you use just as long as you are consistent when crimping connectors onto both ends of a cable.

Why does an Ethernet cable have eight wires in it? Does it matter which color goes where in a connector? The answers to these two questions are surprising.

First of all, the UTP cable that is always used for Ethernet networks doesn’t need to contain eight wires. However, this is the convention. The blue pair and the brown pair don’t do anything.

The wires within the colored jackets are all identical. If you strip the casing of the blue-striped wire, it looks exactly the same as the orange solid wire when that is stripped. The fact that there are two different sets of guidelines for wiring an RJ-45 could lead to chaos. However, it really doesn’t matter which order you put the wires in, just as long as you put the same color in pin 1 in the connectors at either end and the same color in pin 2 and so on.

The socket that the RJ-45 fits into is soldered onto a network card. Every piece of equipment that can connect to a cabled network has to have a network card, which is also known as a network interface controller, or NIC. There are actually two types of devices that connect to a network: DTEs and DCEs. DTE stands for “data terminal equipment.” This refers to your computer. A DCE is “data circuit -terminating equipment.” This means any network device, such as a modem, a router, or a switch.

The distinction between DTEs and DCEs is important when you want to work out whether to use a straight through cable, or a crossover cable.

The important factor to remember when wiring RJ-45 plugs is the function of each pin. The following list shows the purpose of each connector within the 8P8C plug that fits into the DTE:

The connections within the socket on either side have to correspond with each other. There is no point in a DTE transmitting data down pins 1 and 2 if the DCE on the other end also regards those pins as connections it should send data over. So the sockets on a DCE are wired in reverse. Here is the pin purpose as far as a DCE is concerned:

A straight-through cable is often called a wired patch cable or an Ethernet cable. The cable that comes in the box with your router is a straight through cable – it is the most common format for network cables. The straight through cable is configured as described above. It doesn’t matter whether the cable you buy follows EIA-568A or EIA-568B because in both cases, the same color wire connects to the same pin at either end. This is the cable you use to connect a DTE to a DCE. There is no wrong end. The connectors on both ends are exactly the same and the socket on your computer that the cable plugs into is exactly the same (externally) as the plug on your router or modem that takes the cable connector.

Straight through or crossover

Remember, two types of devices that connect to networks. When you connect two devices of different types together, you use a straight through cable. When you connect two devices of the same type together, you use a crossover cable. All cables are straight through if you insert a network device between two devices of the same kind. When you need to buy a network cable, define the devices that you want to plug each end of the cable into by the DTE/DCE categories. This list should clarify the configuration of cable that you need.

There is no DTE end or DCE end in network cables. You can’t plug them in the wrong way. If the same colored wires connect to the same pins in the connectors at both ends, you can plug either end into your computer and the other end into your router. It doesn’t matter. If the wiring sequence is different between the two ends, it doesn’t matter which end you plug into your computer and which goes to your printer.

One more pointer for those sitting the CCNA exams, the wiring diagram for straight through cable in the test shows the EIA-658B pinout at both ends.

Away from the CCNA exams, there is one more complication to take into account when you are buying network cables.  If your device implements MDI and MDI-X, you don’t need to worry about crossover cables. MDI is the Medium Dependent Interface standard and it operates inside the socket of a NIC. It can detect which wire transmissions arrive on rather than doggedly listening on pins 3 and 6. MDI-X stands for Medium Dependent Interface – Crossover. So, if your computer, printer, switch, router or modem has MDI printed on the box, you only need to buy a straight through cable.

These days, you shouldn’t have to worry about rollover cables. They simply reverse the pin order of each wire in a cable. The wire that connects to pin 1 at one end goes to pin 8 at the other end, the wire that goes to pin 2 and the first end goes to pin 7 at the other end. In the middle of the connector pins 4 and 5 are reversed. This format is used for RS-232 connectors that attach to serial ports on computers, printers, or monitors. Serial ports are old news and you shouldn’t need to worry about buying a rollover cable.

You may see network wired cables that are gray, while others are yellow, some are blue, and then there are white ones. Why? Most cable networking professionals will tell you that the cable jacket color has no meaning; it is just a question of aesthetics. They are partially right. The contents of the cable are exactly the same no matter what the plastic jacket color is. However, cable manufacturers don’t just produce different colored cable jackets for the fun of it. 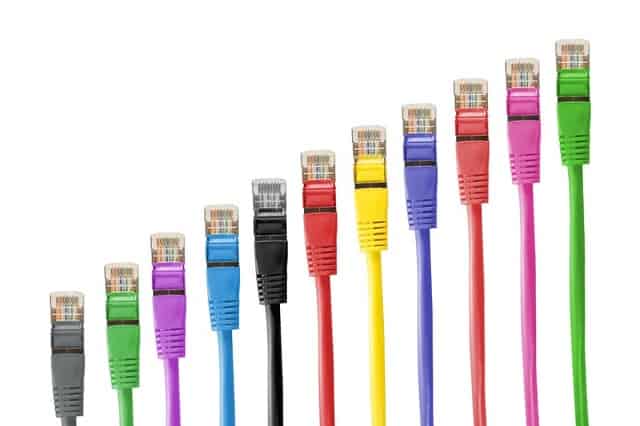 There is an industry standard to which these colors are meaningful. Whether you choose to follow that convention is up to you – most sites don’t pay attention to the standard. The Building Industry Consulting Service International (BICSI) propagates standards for integrating IT services in structures. Among the standards that it promotes is EIA-568, which you have already read about. Another standard is the Administration Standard for the Telecommunications Infrastructure of Commercial Buildings, also known as ANSI/TIA/EIA-606-B (PDF). This is where those cable colors originate. The meanings of cable colors are as follows:

Here is an image of the color coding section of the EIA-606-B standards document where these colors are defined. 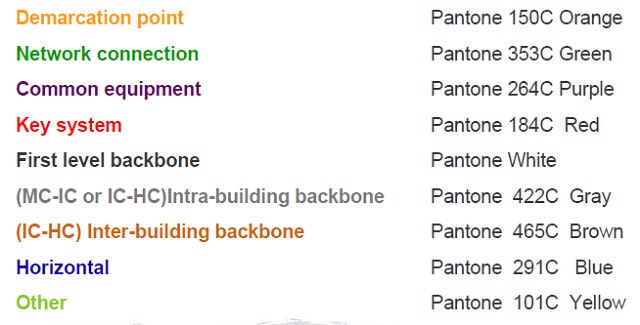 Network creation, maintenance, and administration is a very satisfying career path. It is a very technical field and you will encounter a lot of academic and theoretical information on the topic. However, it is also a very important real-world factor that keeps the wheels of commerce turning. As you become more proficient in cable networking theory and practice you will contribute more to the economy and help the world thrive. Your starting point is knowing how to crimp a connector onto the end of a network cable.

Now that you know about the layout of networking cables and how to connect them to devices, you are on your way to becoming a network engineer or a network administrator! We hope you have enjoyed our cabling guide.

⭐Why did a straight through cable work when I connected a router to another router?

Although convention states that a connection between two routers (DCE to DCE) requires a crossover cable, a straight-through cable will work if either or both of the devices implements the Medium Dependent Interface (MDI) standard. This detects which wires to listen on for incoming data and thus determines which wires should be used for transmission, so the wiring within the connector doesn’t matter.

⭐Which tools are required for making straight through cable?

The tools needed to transform a network cable and two RJ-45 connectors into a straight-through cable are: