Dynatrace and Datadog both offer system monitoring tools from SaaS platforms. It’s difficult to choose between them, so we investigate.
Stephen Cooper 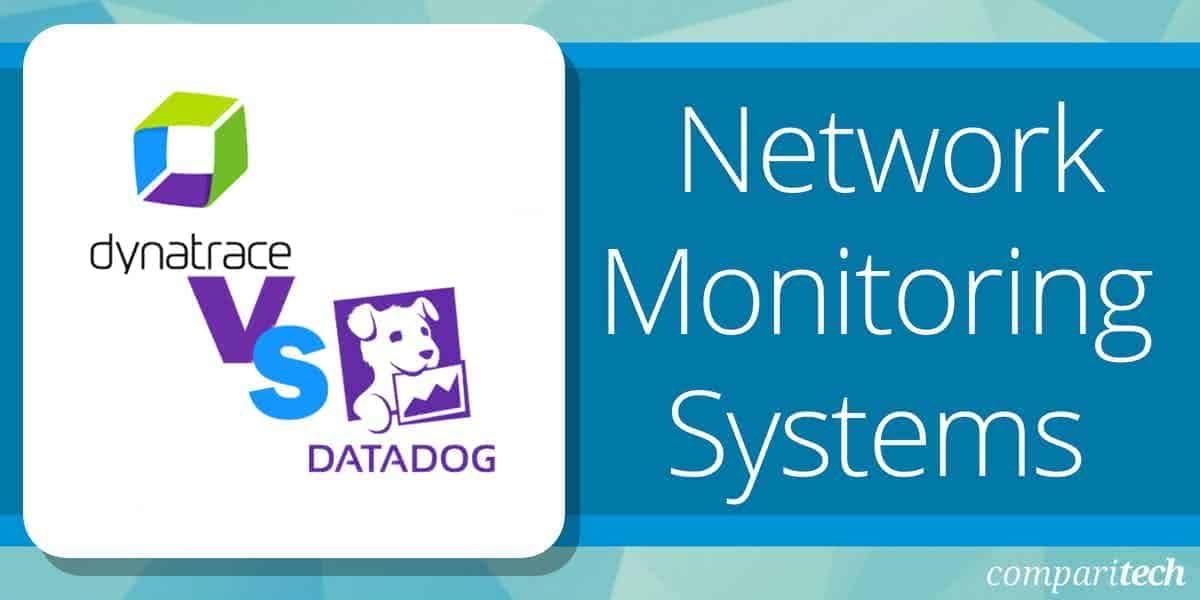 System monitoring is an essential part of any business these days, given the dependency of all commerce on IT services. However, choosing which monitoring tool to watch over networks, servers, and applications can be daunting as most services offer separate deals on devices for each area of operations. Another problem is that you have to make sure you have server space and sufficient capacity to run this monitoring software. You also need to keep the software up to date. The task of hosting monitoring software is removed if you choose a cloud platform for your monitoring service.

Both Datadog and Dynatrace are SaaS systems that can monitor any network anywhere. They can unify the monitoring of several sites and also cloud resources. As Web services become more complicated, many monitoring tools fall short. Long-running, successful providers of monitoring tools have invested all of their expertise in on-site systems, and they are finding it difficult to pivot over to hosting their software as a SaaS platform. Dynatrace and Datadog do not have this problem. Both keep expanding their tools to account for development in technology.

The similarities between Dynatrace and Datadog are striking. Admittedly, each platform stresses particular specializations. However, a deeper five into the offering of each show that they both have the same capabilities. Therefore, it can be tough to choose between these two system monitoring platforms.

Dynatrace started up in 2005. The company was initially based in Linz, Austria, and its founder, Bernd Greigeneder, is still involved with the business as its Chief Technical Officer. The ownership of the company has changed over the years. It was overtaken by a US company, Compuware, and moved to have its headquarters in Waltham, Massachusetts.

Compuware was taken over by the technology investment house Thoma Bravo in 2014. While that organization still owns most of the shares, the business has been listed on the New York Stock Exchange since August 2019.

The Dynatrace system monitoring service is called the Dynatrace Software Intelligence Platform. Its main selling point is its AI processes. This is applied to the thresholds that it places on performance and resource monitoring.

Most system monitoring tools use thresholds. This is a level of a monitored metric that indicates a problem. An example of this is CPU utilization. A system administrator might set the alert threshold on this indicator at 80 percent. If the CPU activity crosses that line, the system registers an alert. With Dynatrace, those threshold levels are automatically adjusted. That flexibility removes the need for system administrators to work through the settings of each metric, placing a threshold level for each.

Essentially, the AI function in Dynatrace adapts the monitoring service to the working practices of each IT operations team. For example, if the technicians don’t do anything until a resource is utilized up to a certain level, the AI part of Dynatrace records that level. Once that delay in reaction has been repeated a few times, that threshold level becomes firm. However, changes in working practices will also be detected and automatically adjust those threshold levels.

A shortage of one resource can impact an application. Dynatrace maps application dependencies and records the resource requirements of each app and service. This enables the system to calculate potential problems if the activity of one application increases and puts a strain on a resource shared with other applications and services.

Datadog was founded by Olivier Pomel and Alexis Lê-Quôc in 2010. The pair had acquired system monitoring software, written in Python, from Server Density. After adapting and refining this system over the years, the company evolved its design into a cloud platform. The founders are still with the company – Pomel is its CEO, and Lê-Quôc is the Chief Technology Officer. The company was listed on NASDAQ in 2019, and it currently has more than 2,600 employees.

Since its creation, the original code for the Datadog monitoring package has been completely re-written in Go. The company has also expanded its services considerably, adding on log management and security monitoring. Several new technologies have also been implemented both in the methods used by the service and in the systems that it can monitor. Some of the new functions added to Datadog were developed by acquiring smaller companies and integrating their specialist products into the Datadog platform.

Today, Datadog can monitor networks, servers, and applications on customers’ sites. It can test internet connections and Web application performance. It can also implement tracing for microservices.

Datadog can monitor virtualizations on-site and also cloud virtual servers. The system can monitor Docker on-site and in the cloud and gather metrics from AWS, Azure, and Google Cloud Platform.

The Datadog platform isn’t just for monitoring systems because it also includes some system management functions. These include a log manager and Cloud Security Posture Management, which is a vulnerability manager.

A significant new package available from Datadog is its Incident Management module. Another new service offered by Datadog is its Bug Tracker. The security monitoring services of Datadog also move into system management territory because they also perform automated services to protect the system.

As you will have noticed in the above description of Dynatrace and Datadog, the two services are remarkably similar. Although Dynatrace stresses its AI processes as its unique selling points, Datadog has the same AI features.

Standard features of Dynatrace and Datadog

If you are looking for specific monitoring capabilities, you will find all of the following features in both Dynatrace and Datadog:

Differences between Dynatrace and Datadog

The critical differences between Dynatrace and Datadog lie in the extra services that they offer apart from system monitoring. These are:

Both Dynatrace and Datadog are SaaS platforms where most of the processing for the system is performed in the cloud. This includes the hosting of the user interface. In both cases, the system dashboard is accessed through any standard Web browser.

An example of a screen from Dynatrace can be seen below. 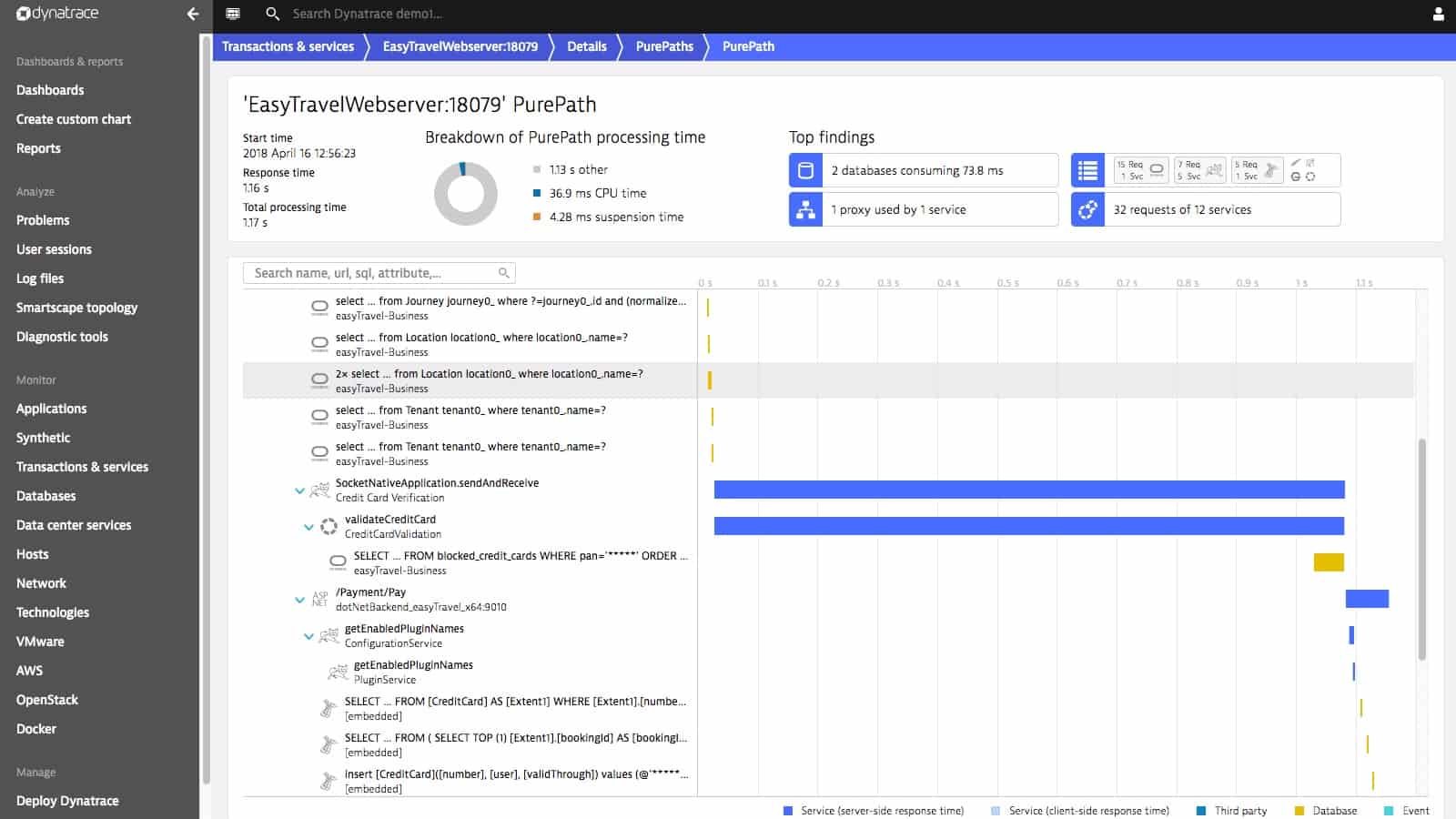 This spacious layout is typical of the look-and-feel of Dynatrace. However, the Datadog dashboard crowds a lot more features into the screen. This is shown in the example shown below. 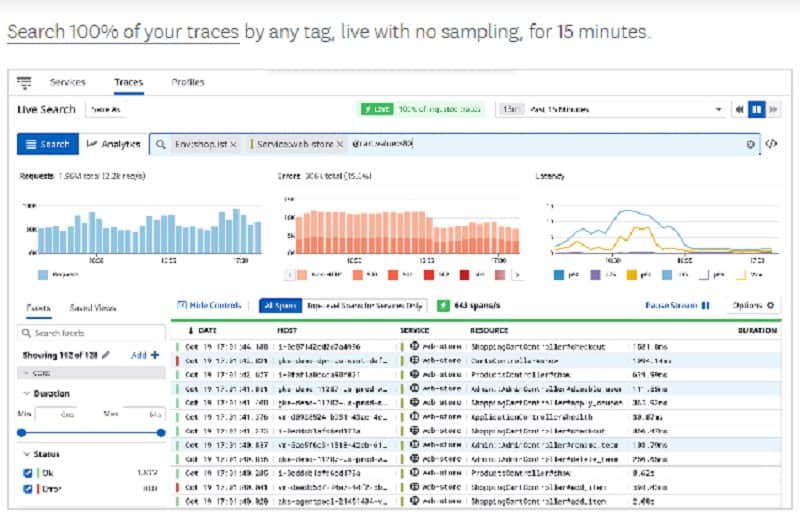 The organization of these two systems into modules makes them similar.

Dynatrace is offered in six modules. Each of these is charged separately, but you can also build up an account covering several units. These modules are:

The above prices are the base rates with more charges for extra data throughput volumes. In addition, subscriptions have to be paid annually in advance.

Datadog has 12 modules, and each has its charging structure.

Dynatrace offers a 15-day free trial, which is implemented as a suspended charge. So, you sign up for the modules you think you will use and, if you decide that you don’t like or need one of those services, cancel it before the first 15 days have passed. Dynatrace also offers a guided demo of the monitoring system.

Datadog’s 12 modules are all available for a 14-day free trial.

When comparing Dynatrace and Datadog, which is the winner? It’s a dead heat. Both are suitable for businesses of all sizes, thanks to their scalable pricing structures. While Dynatrace emphasizes its AI features, Datadog matches that technology, although you have to read the details of the platform’s services to discover that.

Those who want a managed service wouldn’t opt for Datadog because that company doesn’t offer that. On the other hand, those who wish to a SIEM system would include Datadog on their list of candidates to investigate, but not Dynatrace.