Hub Vs Switch Vs Router

Network devices link cables together to form a LAN. You can use hubs, switches, and routers in your network but what is the difference between them?
Stephen Cooper 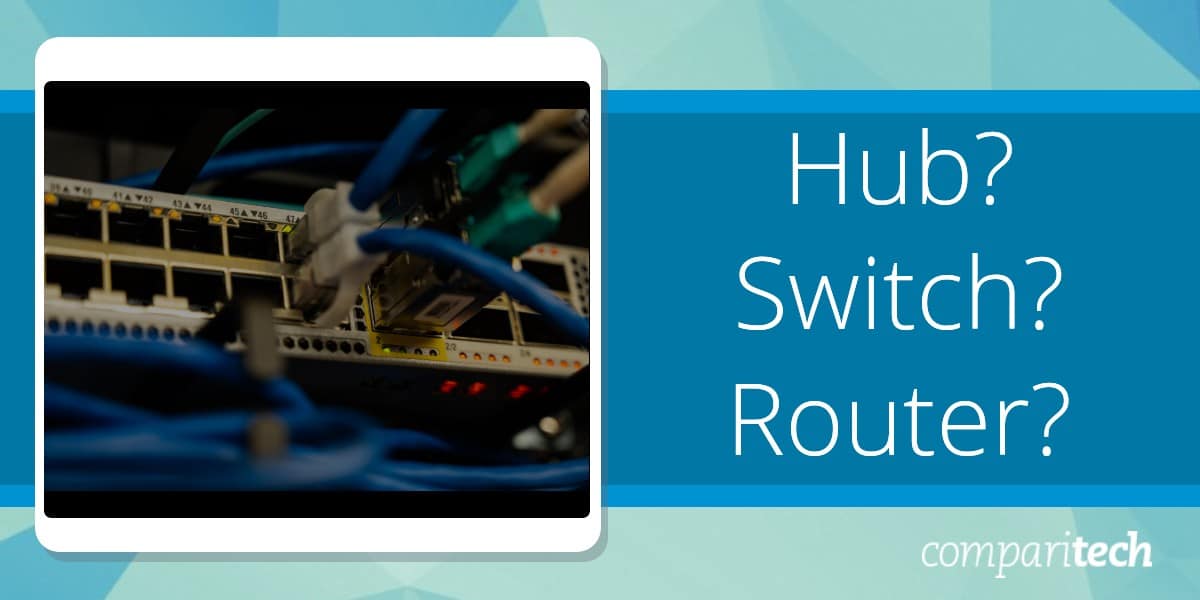 When planning a network, you need to work out topology and then you have to decide which equipment to buy.

Apart from the cable, the most important elements on a network are the devices that join links together. Your options are hubs, switches, and routers.

Network administrators talk about network devices without fully understanding the difference between them. They certainly have different prices and there are also big price differences for equipment within each category. You might be spending too much on your network devices if you don’t properly assess the network’s needs.

We examine hubs, switches, and routers to help you to decide how you can best deploy your budget to get a fully functioning network for your offices.

Hub vs Switch vs Router overview

If you prefer to think of networking technology in terms of layers in a stack, the following diagram should help you understand the difference between a hub, a switch, and a router. 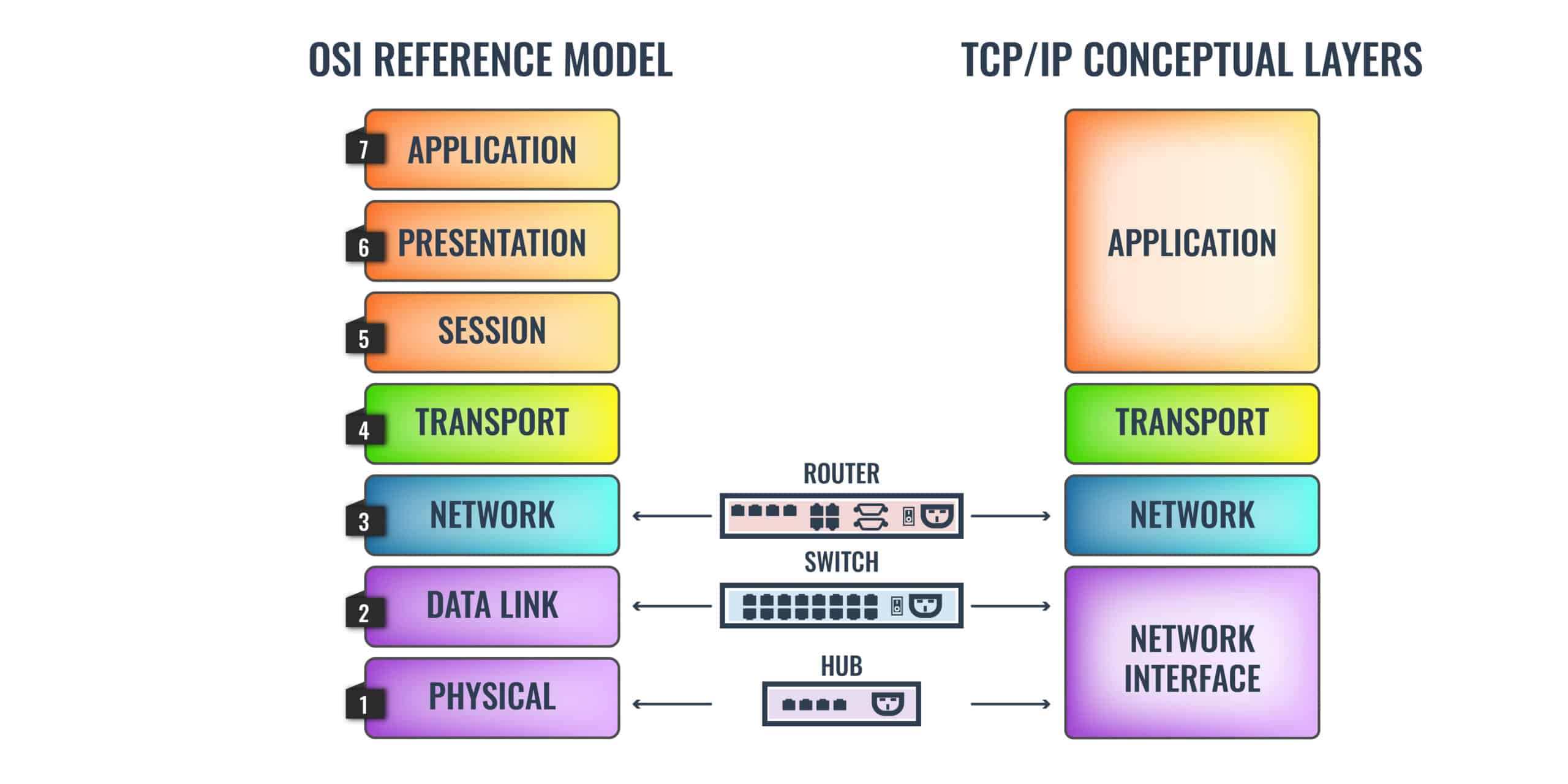 This diagram makes it clear that routers have the most functionality and hubs have the least.

What is a hub?

A hub links lengths of network cable. Rather than joining two lengths of cable, the hub is a box with an array of network cable sockets on it. Each cable plugs into a socket on the hub. Any signal passing down one of those cables enters the hub. The hub then copies that signal onto all of the other cables plugged into it.

Hubs are also known as Ethernet hubs and multiport repeaters, which gives you some idea of the level of activity that they provide. Hubs don’t offer any processing power. They just copy any incoming data onto all the other connected cables. 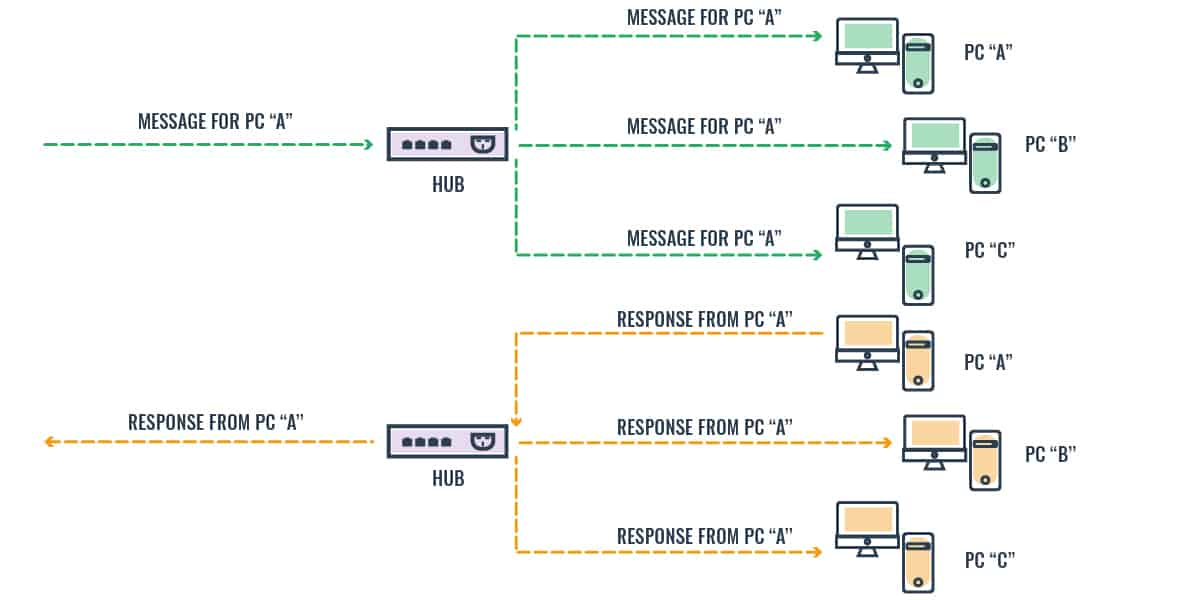 As it doesn’t perform any processing, the hub has no need to look at any information in the header of any incoming packets or data frames. It doesn’t make any decisions over what destination the data is intended for.

Why use a hub?

Hubs cut costs because they don’t need any complicated on-board computing power or operating system. However, they also create a lot of traffic. Every cable receives all of the data sent by all of the other cables connected to the switch, whether it can use that data or not. That large amount of traffic isn’t much of a problem for the endpoints on the network because network cards are programmed to only pay attention to transmissions that have the right MAC address in their headers.

The main problem with a hub is that it can slow down traffic if it has a lot of cables connected to it. This is because it can only process one incoming data stream at a time and copying that incoming data is inevitably going to take a little time. The more endpoints that are connected to the hub, the more likely it is that several of them will want to send data at the same time. To head off this performance limit, manufacturers usually produce hubs with only four or five ports.

Where to use a hub

Hubs offer value for money for small networks. They can link to larger networks that have more complicated network devices. Traffic volume handling means that it is unlikely that you would have a hub close to a major originator or destination for data. You wouldn’t have a hub feeding data through to a router and then on to endpoints. Rather, a hub could play a part in a larger network by supplying a small segment that doesn’t have much traffic.

Hubs come in a range of capacities. Very cheap hubs don’t have much capacity. Hubs that offer fast throughput for larger volumes of data can be more expensive than switches and they don’t offer more ports than cheaper hubs.

Here are a few examples of hub models that are currently on the market and what you can expect to pay for them. 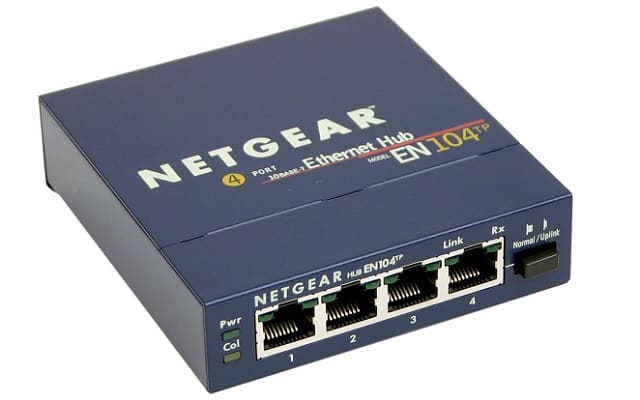 One big problem when considering a hub for a network is that they aren’t so easy to buy anymore. Switches have been around for so long that, through mass production and development cost write-off, they have become as cheap as hubs or even cheaper. When considering a hub, it is just as cost-effective to look at unmanaged switches as well and you may find that a switch offers better features at a lower price.

Another piece of hardware that has made Ethernet hubs almost completely obsolete is the WiFi hub. Most small business situations that might have once been ideal environments for a network hub now opt for a WiFi system instead.

Typically, a small business would need to link several computers on a network together with a printer and a point-of-sale device. Almost all of the devices on the network would need internet access. Most internet service providers (ISPs) supply a WiFi hub free of charge. That fulfills all of the functions previously required from an Ethernet hub, while also supplying the internet gateway and eradicating the need for network cables.

What is a switch?

Switches are the most widely encountered devices on networks. This is because they were originally designed to connect together links on private networks while routers are meant to connect networks together.

You have already seen how a hub works. A switch operates in the same way but with one important difference – it only copies incoming data onto one connected cable. This straightforward difference drastically cuts down on network traffic. 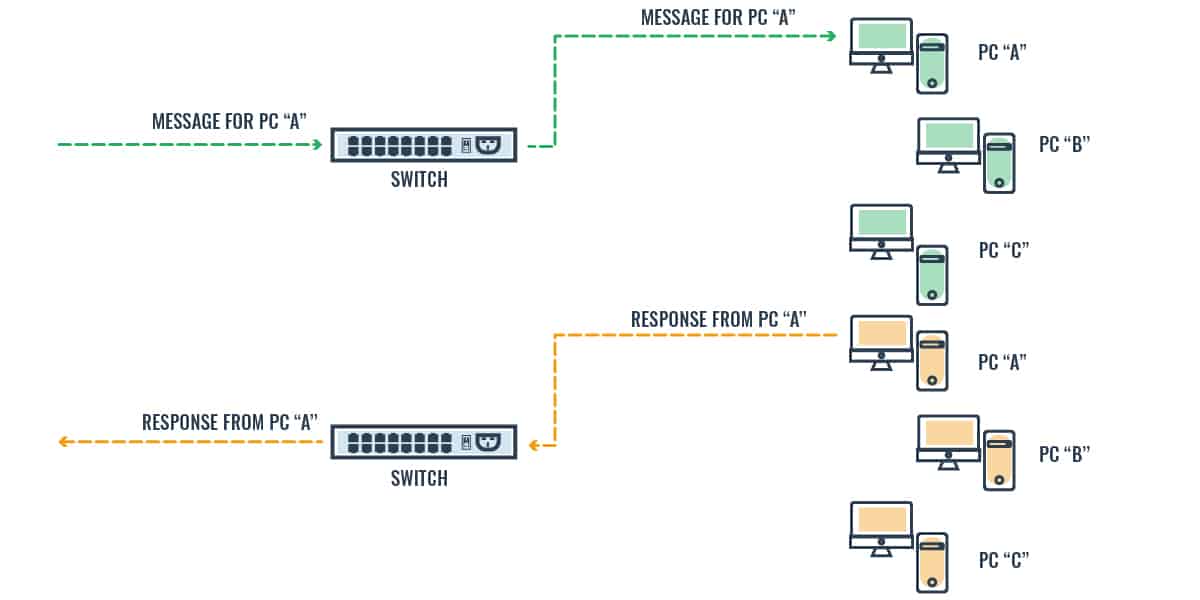 The switch associates an address with each of its ports. Switches manage data frames, which have headers that contain source and destination addresses. Those addresses relate to the network card on the other end of each cable that is plugged into the switch. Each network card is embedded into an endpoint, such as a PC or a printer. The addresses are called MAC addresses – MAC stands for “media access controller.”

So, when a data frame arrives at one port, the switch reads the destination address in its header and copies the frame onto the port that is associated with that MAC address.

Why use a switch?

Switches are efficient. They produce much less network traffic than hubs and they specialize in linking together devices rather than connecting whole networks, like routers. The tasks of each individual switch are very simple, but when working in concert, a number of switches can easily transmit data around a relatively complicated and extensive network.

In order to build up a network, engineers connect switches together. So one port on the switch will relate to many addresses. Switches teach themselves what address lies at the other end of each cable that is plugged into it so they are very easy to install. Although switches don’t require much processing power, the on-board chips of these devices are capable of managing traffic through queuing algorithms, compiling statistics, and copying data for analysis (acting as a splitter).

Most switches are pre-installed with an SNMP agent. This works along the rules of the Simple Network Management Protocol to provide regular status reports and notify a central controller when problems arise.

Where to use a switch

Switches are deployed in large numbers for medium-sized and large networks. The devices are very scaleable and can extend a network infinitely. So, there is no limit to the size of the network on which you will encounter switches.

As a rule of thumb, those categories are listed above in price order from the most expensive down to the cheapest type of switch.

The type of switch you choose and the number of ports it has will dictate the price you should expect to pay. Here are three examples.

If you are building a LAN, you will be buying switches – there aren’t really any serious alternatives. However, you will certainly also have at least one router on your network.

What is a router?

Routers are specialized at sending data between networks. That doesn’t necessarily mean that they only work with transmissions off-site because some office networks are made up of a series of interconnected LANs. Routers are needed to power the internet – there are no switches involved in getting data across the internet.

While hubs don’t really pay any attention to addresses and switches work with MAC addresses, routers operate with IP addresses.

Routers are particularly useful as gateways to networks, standing at the exchange point with the internet. The operating area of a router defines an address space, so concepts such as the Dynamic Host Configuration Protocol (DHCP), the Domain Name Service (DNS), and IP address management all pertain to one physical router on a network. A router is able to translate between address spaces. It enables a business to be represented by one public IP address while managing many addresses on the private LAN.

The router is able to track interactions between devices on the LAN and the outside world by managing a Network Address Translation (NAT) system.

Why use a router?

Where to use a router

All businesses that need a connection to the internet need a router. As discussed above, small businesses can get by with the WiFi hub that is provided by an ISP. This “hub” is actually a router because it distributes addresses to all devices within the business’s premises and represents that business with one public IP address on the internet.

There is only one type of router for wireless networks. You will see some reference to two types of routers but this just refers to wired and wireless routers. You will also see references to the core or edge routers. These are the same devices placed in different locations on a network. A core router is only able to manage traffic within one network because it doesn’t have a connection through to a neighboring network – if it had, it would be an edge router.

The network manager with an internal router can experiment with routing algorithms. However, any router connected to the internet has to implement the Border Gateway Protocol – the only routing method that operates on the internet.

Here are three examples of routers. 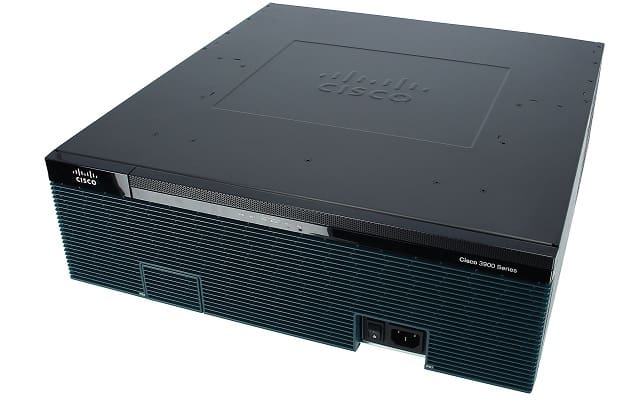 If you need to connect your LAN to the internet, there is no alternative to a router. There are devices that combine switch and router functions. Typically, WiFi hubs include four switch ports. These devices combine switch, router, and wireless access point (AP) functions.

What is the difference between hubs switches and routers?

A hub retransmits all of the data it receives from one wire onto all of the other cables connected to it. A switch sends incoming data onto the cable linking to the device with the MAC address contained in the frame header of the datagram. A router can send data far away across many networks by examining the IP address in a packet header.

What is a hub used for?

A hub has no processing capacity. It just copies over incoming data onto all of the other cables connected to it. This is OK for a small network and the device costs less than a switch. However, sensing all data out to all endpoints creates a lot of surplus traffic – switches are more efficient.

Is a WIFI router a switch?

The most commonly used WiFi device for homes and offices is not a switch but it is a combined access point (AP) and router. You can tell that it is a router and not a switch because it works with IP addresses for local devices rather than MAC addresses.