SFTP and SCP are two secure file transfer systems. If you are considering using either for protecting file transfers, you need to know what each system is and which would be better to use.

SFTP is the SSH File Transfer Protocol and it is also known as the Secure File Transfer Protocol. SCP stands for Secure Copy. The security system at the heart of both of these options is called the Secure Shell, or SSH. Given that these two systems use the same security protection, what is the difference between them? But before we answer this question let’s see which are the best SFTP and SCP utilities in the market today.

The File Transfer Protocol (FTP) is very old, in fact, it pre-dates the Internet. However, this system transfers files in plain text and that lack of security makes it a risky system to use these days. A number of systems were proposed to add security to FTP and SFTP was one of them. However, SFTP isn’t FTP with SSH added on. Rather, it is a separate protocol that was created from scratch.

SFTP was first created in 1997 by SSH Communications Security as a proprietary system. It is now an open standard and has been revamped six times since its inception. Version 6 has actually been incrementally revised eight times.

SFTP relies on SSH to establish a secure connection. The file transfer system works with that encryption in what is termed a “tunnel.” SFTP operates as a command-line utility. Unlike FTP, the SFTP program doesn’t have an interactive mode. Instead, all commands need to be formulated in one line.

SCP arose from the Unix operating system. In Unix, the command to copy a file from one location to another is cp. So, adding security to that service created the scp command. SCP is based on the BSD Unix Remote Copy Protocol (RCP), which dates back to 1981.

The SCP service uses SSH to provide its security. It is possible to send files to a remote server with the -t switch. This is called “source mode.” In order to fetch a file from the remote computer, the user enters the -f switch, which is called “sink mode.”

Despite being newer in origin than SFTP, SCP is regarded as being out of date. Although SFTP is older, it has been updated frequently, with the latest revision being released in 2006. Although SCP is based on a Unix routine, it is also available in Linux, macOS, and Windows.

The SCP utility is a straightforward one-line command the two parameters needed for a file transfer are the from and to file names. The remote system is indicated by a username and hostname on front of one of the files. The first file name in the command is the source and the second is the destination.

There are many similarities between SFTP and SCP. Both have the following attributes:

There are a few major differences between SFTP and SCP.

SFTP vs SCP: Which is better?

The packet confirmation procedures in SFTP imitate those used in FTP. However, FTP uses two channels, one for control messages and one for data. SSH only has one channel and the SFTP system has to work within that constraint. The problem with that configuration is that it waits for an acknowledgment for each packet before sending another. This slows down transmissions in SFTP considerably.

The developers of OpenSSH who produce the most widely-used implementation of SCP published a note in 2019 that stated SCP was out of date and shouldn’t be used anymore. They recommended SFTP and rsync instead.

SCP isn’t able to issue file manipulation or direct commands, However, perhaps as file transfer protocols, users shouldn’t expect remote access facilities from either SCP or SFTP. These are better systems for remote access and, supporters of SCP could argue that the file management commands in SFTP are superfluous.

In conclusion, SCP is faster than SFTP while SFTP has more utilities.

The best SFTP vs SCP utilities

The command-line versions of SFTP and SCP are not your only choice. In fact, most users of these two utilities don’t access them directly. Software producers have created some pretty impressive file transfer systems that, essentially, are GUI front ends to an operating system call of either the sftp or scp command.

Those frontends are able to assemble file transfer actions according to the values that the user enters in various parts of the interface. Many interfaces also introduce innovations, such as drag-and-drop actions that get interpreted into command variables.

The fact that these two commands can each be executed in one line makes them great for integration into workflows. IT automation systems operate in modules, which can assemble together into a batch file that executes down at the operating system. Under that scenario, it doesn’t matter so much that SCP can’t execute remote commands because a linked process can log into that server that received the file and execute commands through some other protocol.

Here is our list of the six best SFTP and SCP utilities:

There really are many great systems that implement SFTP or SCP and a number of packages that offer both. The best ones are listed below.

Serv-U includes an administrator console. It is possible to set up user accounts within the environment but Serv-U integrates with Active Directory and LDAP, so it is more usual to link company-wide user accounts to the SFTP system.  Serv-U logs all file actions, recording the user and timestamp for each. This is a necessary feature required for data protection standards, such as PCI DSS, SOX, GDPR, and HIPAA.

Although many of the SFTP servers available today are cloud-based, the on-premises delivery of Serv-U is an advantage because it simplifies the legal accountability of protecting data in transit and on a server. Other benefits of the Serv-U Managed File Transfer Server include the ability to integrate file transfer activity into wider process automation workflows.

Serv-U Managed File Transfer Server installs on Windows Server and Linux. It is available for a 14-day free trial.

This is a simple tool for ad-hoc file transfers and remote access. It is a useful utility to have on hand for quick admin tasks to get access to endpoints on a network. This service is quick because it will store credentials for file servers and remote systems. It cuts out a lot of the delay that logging in can cause, so it is handy to have around.

SolarWinds Solar-PuTTY is a Free Tool and installs on Windows and Windows Server.

Files.com is a cloud platform that operates as a file management hub. File transfers under this service can be implemented with SFTP, FTPS, and FTPeS. The system is able to work with a long list of FTP clients.

The Standard plan with Files.com includes 1 TB of storage space, the Power plan includes 5 TB of usage and the Premier plan includes 10 TB of data. Users need accounts set up with 2FA for validation. The file storage is central to the Files.com service.

All file transfers pass through the Files.com server, which monitors and logs all actions on files, including SFTP operations. The Files.com system will manage emails, upload attachments to the server, and insert a link in the email.

The storage and secure link system is also used for file distribution. This cuts down on the number of files that need to be transferred to outsiders. The file owner just emails a link to the file and this notification mechanism is also managed by Files.com.

The file activity logging service in files.com makes the service suitable for HIPAA or PCI DSS compliance. Files.com is available for a 7-day free trial.

WinSCP is probably your best bet if you want an SCP client for Windows. This utility has been downloaded 153 million times, so it has been very well tested in the field. Remember, SCP is able to send files and received them, so you can manage all transfers from the client program installed on each endpoint. The only problem with this system is that there is no central control for administrators.

WinSCP is able to use FTP, SFTP, FTPS, and WebDAV to govern transfers as well as SCP. This service is also implemented as a command-line utility that will run calls that are integrated into batch files for process automation.

WinSCP lacks a lot of coordination and control functions that many corporations need in a file transfer system but it is free to use. 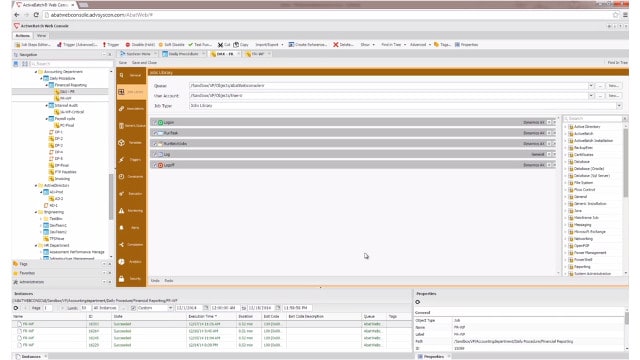 ActiveBatch offers a file transfer service that uses SFTP or FTPS. This is a cloud-based file server that can be integrated into an IT automation system and job scheduler. The combination of file transfer management and scheduling makes this a great system for running automated administration tasks.

The ActiveBatch service logs all actions, which provides the system auditing functions needed for standards compliance. It is suitable for use by businesses that need to comply with SOX, HIPAA, PCI DSS, or GDPR.

ActiveBatch can interact with applications, such as databases and ERPs. It can also coordinate file transfers with other cloud platforms, such as AWS and Azure.

There is a demo system of ActiveBatch available for free for assessment.

FileZilla is an on-premises package that is free to use and is very widely used. It offers FTP, SFTP, and FTPS for file transfers. The service can also mount cloud drives through WebDAV. The cloud platforms that FileZilla can interface to include Amazon S3, Backblaze B2, Box, Dropbox, Google Cloud, Google Drive, Azure, OneDrive, SharePoint, and OpenStack Swift.

FileZilla is a useful utility for uploading directories full of files, such as Website files or log files.  It can also interface with content management systems, such as WordPress.

FileZilla is available for Windows, macOS, and Linux.