The Ultimate Guide to Cisco Switches 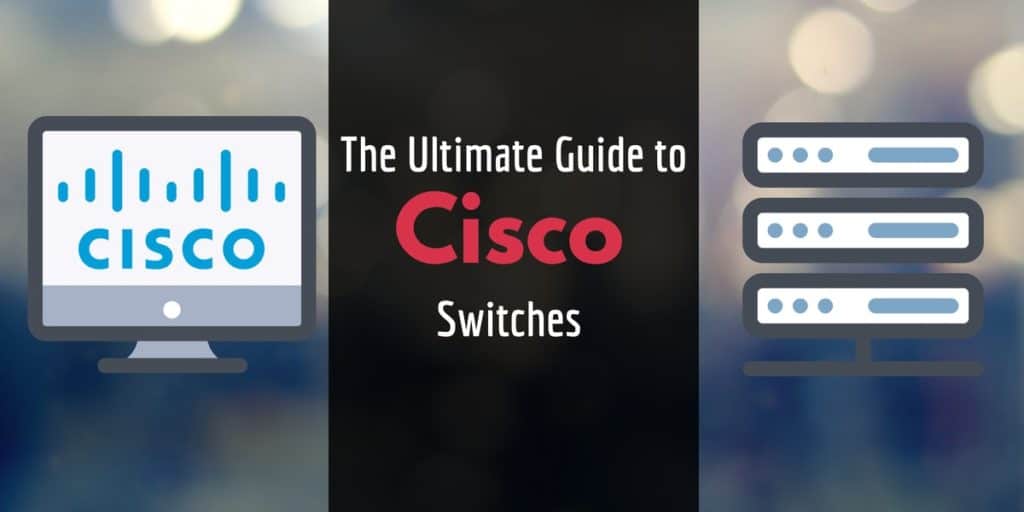 Cisco is undoubtedly one of the most famous IT solution providers in the world today. This company has developed a reputation not just as a pioneer of modern computing but of networking as well. Switches are an area of hardware where you can see Cisco’s dominance first-hand. The sheer volume of switches available and the variety of services provided is a testament to Cisco’s relevance as a company.

If you are looking at installing Cisco switches on your network, we have an article where we walk you through the best Cisco monitoring tools. In this article, we’re going to look at everything you need to know about Cisco switches. This includes a basic rundown of how they work and a guide to some of its most popular series of switches available today.

There are two main types of network switches used by Cisco; fixed configuration switches and modular switches. The difference between these two is explained below:

The switch that you encounter within a networking environment depends on the requirements of the network. We’ve included a list of some of the most popular Cisco campus switches below. For now, we’re going to limit the discussion to the top few switches. At the core layer, you’re most likely to find Cisco Catalyst 6500 or the Catalyst 6800 series. Alternatively, high traffic networks can use switches like the Cisco Catalyst 4500-X series at the Distribution layer.

A number of network switches are classified as ‘managed’. Managed switches allow the user to configure an IP address on the device. Switches 2960-X, 3850-X, 4500-X, and 6800-X are all types of managed switches. The advantage of these switches is that you can use your managed IP address to connect using Secure Shell or Telnet.

The Cisco Catalyst 3850-X series of switches allows you to select network modules (Ethernet or fiber optic) and power supply modules. This series is versatile because it can be deployed in both small and large organizations. Smaller organizations can place the switch at the Core layer if they don’t have a Distribution layer and in larger enterprise networks at the Access layer.

These programmable switches work with an intent-based networking platform. Programming network infrastructure through these switches allows administrators to tailor their infrastructure according to the services and experiences they seek to provide. For instance, if a team needed to host a video call with a client, a video application would shape the network around the needs of the call to provide the best performance.

At its core, intent-based networking is about combining the efforts of administrators and developers together in synergy. The intention is to create and sustain services that offer a better experience to the end-user. However, programmable switches also offer network administrators the opportunity to automate routine network administration tasks.

There are three different methods that Cisco IOS-based routers use to forward packets across a network. These three methods are as follows:

If you’ve used Cisco Catalyst switches in the past you’ll know that they have a variety of LED lights used to act as indicators of performance. Depending on the model of the switch there will be different LEDs from product to product. On all products, these lights have a diverse range of meanings. We’ve listed some of the key LED indicators in this section below for the Cisco Catalyst 2960 switch. 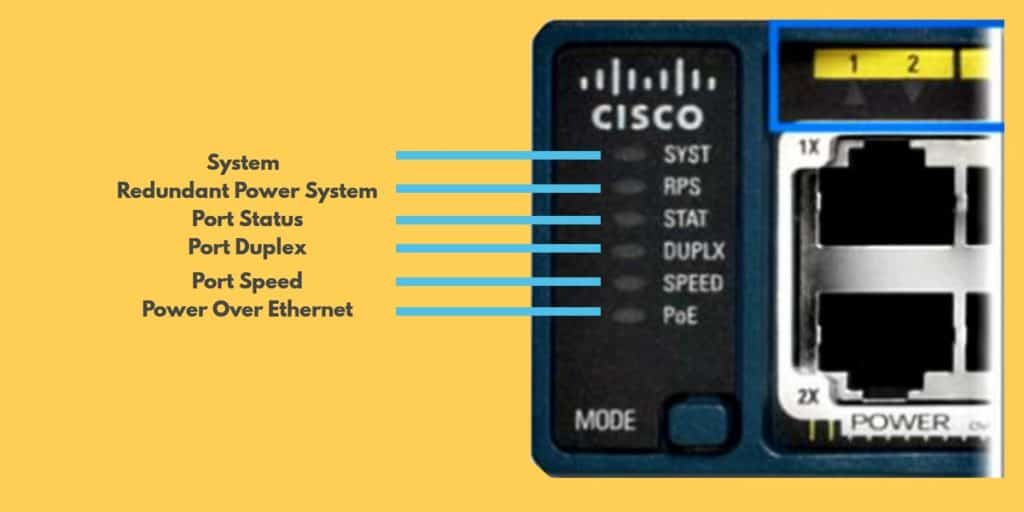 This LED shows you the status of your Redundant Power System (RPS). The RPS is a feature that Cisco uses to protect your switch from power failures that could damage the device. A green LED indicates that the RPS is up and running. If the RPS light is off then the switch isn’t connected to the backup power supply. If you see a flashing green LED then that means the RPS is connected but is providing power to another device. An amber LED tells you the device is in standby mode. However, if this light blinks then that means the device has failed and the RPS is providing backup power.

The Port Status LED light is used to tell you when port status mode has been selected. When the LED is green this means that port status mode is in operation. This is the default mode of the switch. A green LED light indicates that the port is in the process of sending or receiving data. When the LED is completely turned off and inactive this means that there is no link. Likewise, if the LED alternates between green and amber then there is a link fault. In the event that the port is blocked, you will be notified with an amber light.

The Port Duplex LED light is used to indicate when port duplex mode is activated. If you see a green light then all ports that are turned off are in half-duplex mode. A green LED also means that the port is considered to be in full-duplex mode.

Cisco Catalyst switches are specifically designed for enterprise networking environments. Cisco has an extensive range of these campus network switches so we’ve provided you with a guide of the most prominent switches below.

The Cisco Catalyst 9000 series is a series of switches that has been positioned as Cisco’s next generation of networking switches. These switches are designed using the Cisco Unified Access Data Plane (UADP) and Application-Specific Integrated Circuit (ASIC). The end result is switches that offer Software-Defined Access (SD-Access). SD-Access is advantageous because it allows the user to create and provision services quickly.

These switches are campus switches with fixed-core switching platforms specifically designed for the IoT and the cloud. They offer support for MPLS, MVPN, NAT, and Layer 2/3 VPNs. They also have their own SD-Access abilities and are virtualized Cisco StackWise Virtual technology.

The Cisco Catalyst 9400 series of switches is Cisco’s answer to modular enterprise switching. They offer support for up to 9 Tbps system bandwidth and can scale up to 384 access ports. This is a secure switching option that also offers Cisco DNA and SD-Access. The 9400 series is a good choice for organizations looking for scalability and the ability to increase in size.

The Cisco Catalyst 9300 switches are referred to as a stackable enterprise switching platform. 9300 switches offer support for 802.11ax and 802.11ac Wave 2 access points. This is also a good choice in terms of flexible deployment on account of its use of StackWise virtual technology which supports NSF/SSO architecture. The most unique aspect of these switches is that it is the only switching platform with support front and back-panel stacking.

The Cisco Catalyst 6800 series are campus switches specifically optimized for secure 1, 10 and 40 Gbps services. They offer support for Cisco DNA and SD-Access as well as being fully-compatible with the Cisco Catalyst 6500-E series chassis. The modular design of this series makes it ideal for organizations looking for a secure and scalable solution.

The Cisco Catalyst 6500 series is considered to be comprised of backbone switches. This is a popular series on account of its robust performance and scalability. It offers up to 44 ports 40 GE and 534 1GE. There is also complete support for Cisco DNA and SD-Access.

Both the Cisco Catalyst 3650 and 3850 series are stackable switches designed for data, voice video, wired, and wireless performance. There is an integrated wireless controller alongside Layer 2 and 3 access. There is full support for Cisco DNA and SD-Access. This series uses multigigabit Ethernet technology to keep performance high.

Cisco Catalyst 2960-X/XR series switches are scalable switches designed for data, voice and video. This series has Layer 2 and 3 access along with up to 80 Gbps stacking. There are also 10 Gbps SFP+ uplinks. They have dual redundant power supplies with built-in fans to ensure the stability of the service.

Cisco Catalyst 3560-CX and 2960 CX switches are fixed configuration switches aimed towards enterprise users. They have been designed for 8 and 12 Gbps services. These switches have the capacity to support Cisco FlexStack-Plus. These switches are designed to connect computers, wireless access points, IP phones, and surveillance cameras.

The Cisco Catalyst Digital Building is a fixed configuration series of switches. They have been designed with lightweight installation and network administration in mind.  Like the Cisco Catalyst 2960-L series this series operates silently with a fanless design which reduces the risk of hardware failure.

As mentioned at the beginning of this article, the Nexus series was designed with data centers in mind. In this section, we’re going to look at some of the top data center switches that Cisco has to offer.

The Cisco Nexus 9000 series was created to give data centers high performance and low latency. These switches operate in two modes: Cisco NX-OS Software and Application Centric Infrastructure (Cisco ACI). Cisco ACI works much like an SDN solution and puts the application itself as one of the centers. The consequence is a switch that is accessible, transparent, and secure.

Theses switches happen to be some of the most advanced at Cisco’s disposal. The Cisco Nexus 9300 platform uses ASIC and has been created for the express purpose of creating cloud-based deployments. The architecture is highly scalable with support for both Cisco ACI and Cisco NX-OS.

The Cisco Nexus 7000 series is a range of modular switches that include Cisco NX-OS. However, what really makes this series special is that it includes open-source tools that can be programmed and structured according to the needs of a software platform. One of the advantages of this series is that the distributed fabric architecture makes it one of the more scalable switches on the market.

These switches were designed to bring 10/40 Gigabit Ethernet to Layer 2 and Layer 3. This series includes Cisco NX-OS and a scalable experience. The 5000 series includes both the Cisco Nexus 5500 and 5600 platforms. This series can also support an impressive 2304 ports through a single management domain.

The Cisco Nexus 3000 series is well-known for its ability to deliver a low latency service. The main intention of these switches is to provide you a reliable Layer 2 and 3 switching experience. They are particularly ideal for scalable data centers and cloud services.

That concludes our guide to Cisco switches. As you can see, there is plenty of choices in both the Catalyst and Nexus series. If you’d like to find more information about Cisco switches you can do by clicking on this link here. On the Cisco site, you can choose between the following switches: LAN Access, LAN Digital Building, LAN Core and Distribution, Data Center, Cloud-Scale Data Center, Industrial Ethernet and Small Business.

There is some crossover in what these switches do but if you’re working within an enterprise or office environment we recommend looking at the Catalyst series in particular. These switches are built specifically for that environment and they aren’t too complex.