How to watch Floyd Mayweather vs Don Moore (Exhibition) 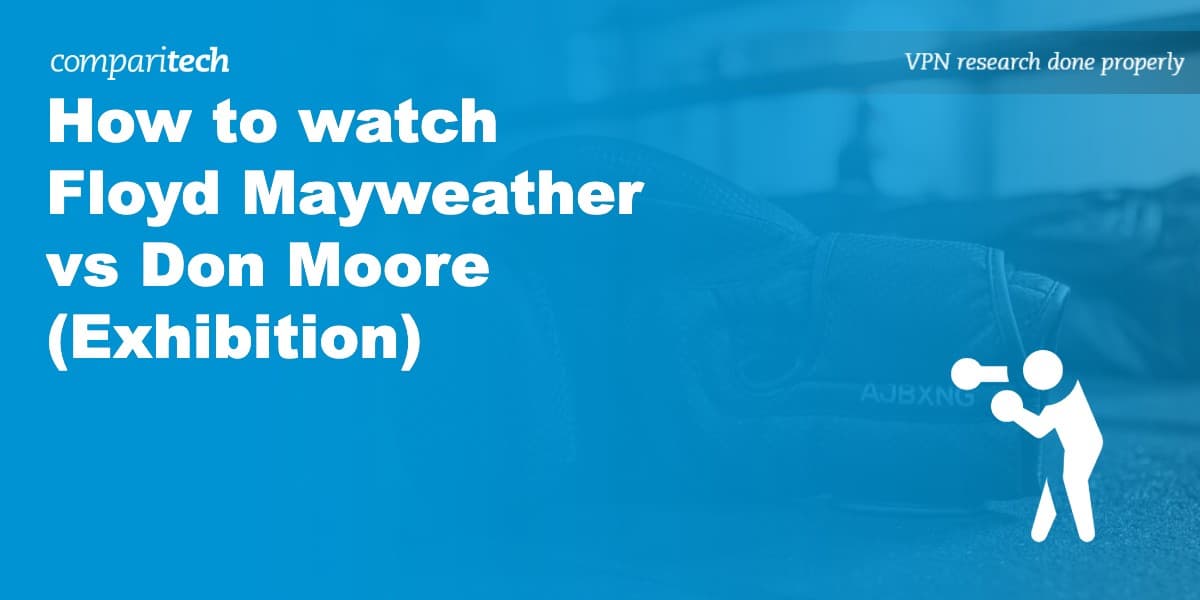 Update: Mayweather v. Moore has been postponed following the recent death of the United Arab Emirates president. Global Titans, the event’s promoter, says the fight will be rescheduled, but has not announced an exact time or date. We will update this article in due course as soon as we learn more details.

This exhibition has been a long time coming! Floyd Mayweather was originally slated to fight Rashed Belhasa, an Emirati YouTuber better known as Money Kicks. However, after negotiations broke down, Moore stepped up. He boasts an impressive 18-0 record, but Money Mayweather has so far gone 50 fights without a loss. Below, we’ll explain what the rest of the card looks like, how much the event costs to watch, and how to stream the Mayweather vs Don Moore fight from anywhere in the world.

As an extremely high-profile event featuring well-known personalities, there are almost sure to be unlicensed streams available. However, we don’t recommend using these. Not only are they usually of a significantly lower quality, but they can be taken down part way through for copyright violation. With plenty of ways to stream Mayweather vs Moore legally around the world, there’s really no reason to use unreliable third-party streams.

Note that this fight will only be shown on geo-restricted streaming services. In other words, you’ll need a Virtual Private Network (VPN) to watch while traveling abroad.

How to watch Mayweather vs Moore online from abroad

VPNs enhance your privacy by encrypting your internet traffic. However, they’re also great for regaining access to your usual services as you travel. Here’s how to stream Mayweather vs Moore from anywhere using a VPN:

The Mayweather vs Moore fight will be shown live, so we strongly recommend making sure your VPN works as expected ahead of time. All of the providers mentioned above include free 24/7 live chat, so getting help couldn’t be simpler.

NordVPN offers a fully-featured risk-free 30-day trial if you sign up at this page. You can use the VPN rated #1 for live sports with no restrictions for a full month. This is perfect for travelers looking to stream the Mayweather/Moore exhibition while traveling abroad.

How to live stream the Mayweather vs Moore fight online

It’s actually quite easy to watch this event online. That said, it’s easy to scroll right past, because it’s listed under the rather lengthy title, ‘Global Titans Fight Series: Floyd “Money” Mayweather vs Don “Dangerous” Moore’.

Fite TV and LIVENow have different content depending on where you are in the world. To access your usual library, you can just use a VPN server in your home country. NordVPN offers a 30-day money-back guarantee, meaning you can claim a full refund if you’re unsatisfied (or no longer need a VPN once the fight is over).

Technically, anything could happen. Realistically? It seems pretty unlikely. After all, Moore hasn’t fought professionally since 2016 and is going up against a twelve-time world champion.

If anything is going to tip the scales in Moore’s favor, it’s the fact that Mayweather has kind of coasted in his previous exhibition matches, rather than going for the knockout. For a solid example, look no further than the Logan Paul fight, which ended with no winner after Mayweather allowed a YouTuber with no professional wins to go the distance.

The difference this time is that Moore is a trained fighter. If Floyd underestimates his opponent, he could well end up losing for the first time ever.