We’ve put together a list of the top holiday movies by state (based on what’s been the hottest topic on Google Trends over the past year) with some surprising (and rather unchristmassy!) results. 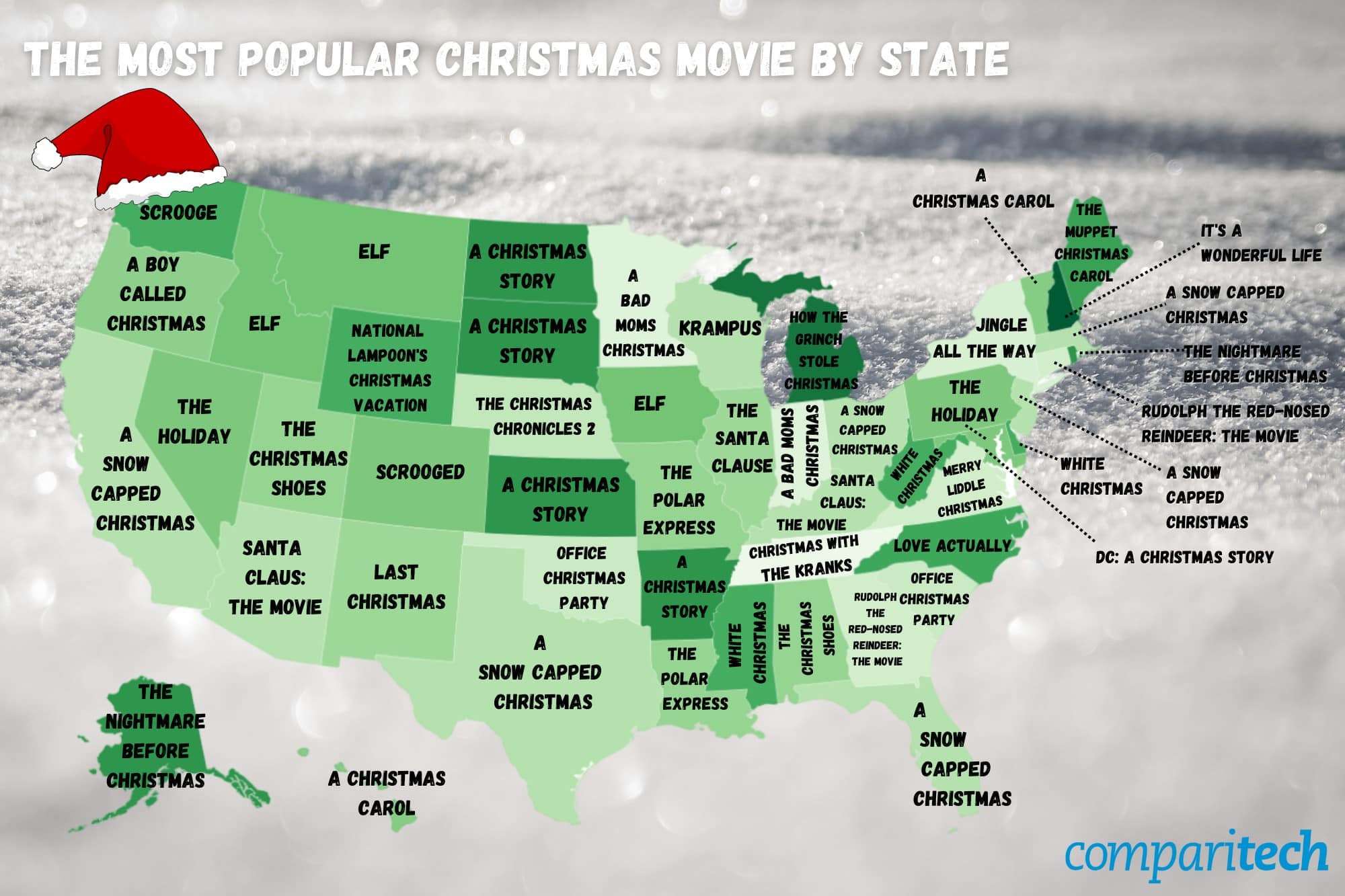 According to our findings, the most popular Christmas movie from the past year was A Snow Capped Christmas (also known as Falling for Christmas). Released in 2016, this cheery must-see follows the story of an injured figure skater who heads into the mountains to recover. There, she meets an ice fisherman who has her reevaluating her life and her focus on competing. It was the top pick in California, Florida, Massachusetts, New Jersey, Ohio, and Texas.

In stark contrast, some states appeared to be in search of something very different when it came to their Christmas movies. For example, Google Trends data suggested residents in Georgia were opting for the 1979 version of Elvis when searching for Christmas movies. But Ohioans, South Carolinians, and Tennesseans fancied something darker, favoring Halloween (2018), Better Watch Out, and Gremlins (1984), respectively. However, as this study is Christmas-based, we’ve selected the top festive movie for each state, meaning the results for each of these states are as follows: Rudolph the Red-Nosed Reindeer: The Movie (GA), A Snow Capped Christmas (OH), Office Christmas Party (SC), and Christmas with the Kranks (TN).

Which states favor the old classics and which prefer a modern rom-com?

As you can see from the above table, there’s a huge variation in the age of the movies chosen with the oldest being from 1946 and the most recent being from 2021. In fact, the average year for the top movies was 1998, showing that we tend to prefer to delve into the archives when we’re trying to find our festive spirit.

Some of the oldest movies featured were:

The more recent favorites were:

Which states have the best and worst taste in Christmas movies?

The average IMDb rating of all the top movies featured in our Christmas list is 6.8. But there are some states that appear to have a more discerning taste.

Two of the oldest movies listed above–It’s a Wonderful Life and How the Grinch Stole Christmas–carry the highest IMDb ratings of our list with scores of 8.6 and 8.3 respectively. As we’ve seen, these were the top picks in New Hampshire and Michigan.

Other high-rated choices include The Nightmare Before Christmas and A Christmas Story. Both have IMDb ratings of 7.9 with the former being a must-watch for residents of Alaska and Rhode Island and the latter for those in Arkansas, the District of Columbia, Kansas, North Dakota, and South Dakota.

Using Google Trends to search for the term “Christmas movie” in each state, we looked to see which movie was a rising topic in the related topics section. Rising topics are the top related search terms users looking at Christmas movies also searched for over the past year and saw the biggest influx in searches during that period. The top result for each state was the designated movie for that state. In some cases, a movie franchise may have appeared on top, e.g. “Christmas Chronicles series” but we only noted the title when it was a specific film. And, as mentioned previously, some non-Christmas films also appeared but were not included.