What internet activity would you be willing to cut down on to save energy? 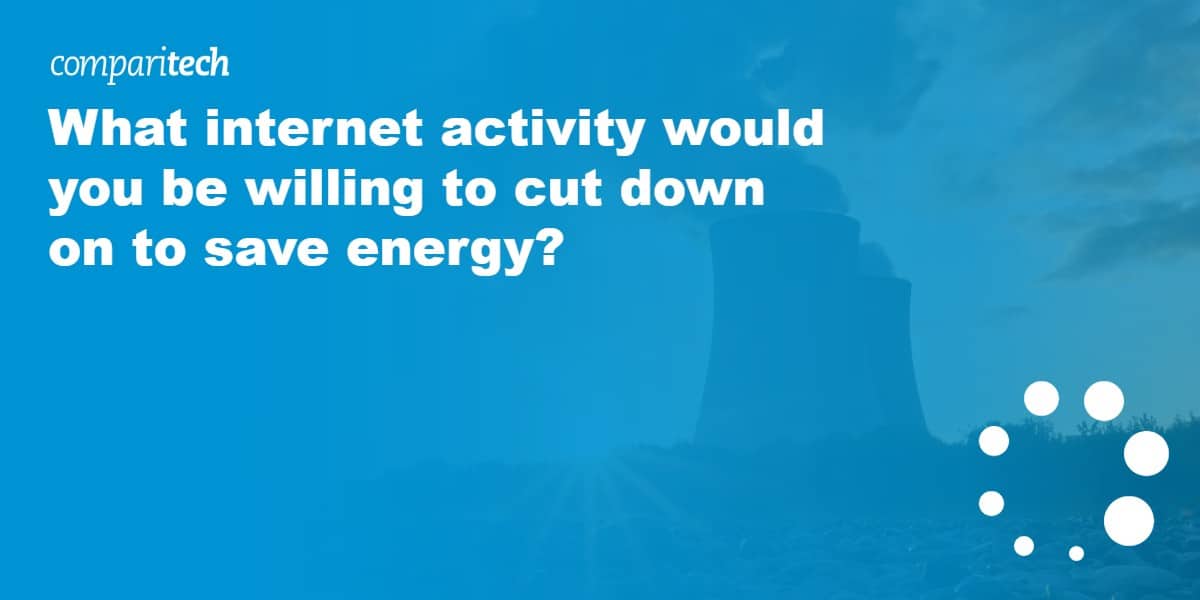 As we run into the final week of the 26th UN Climate Change Conference of the Parties (COP26), we see countries from all over the world coming together to try and inspire a unified approach to climate change.

It made us think, what would you, as an internet user, be willing to cut down on to save energy?

To find out, our team has calculated energy consumption across a number of online activities. On your own, the energy you save by not watching Netflix one evening, calling your Nan on Skype for an hour, or playing COD for the sixth time in a week may seem negligible. But cumulatively, it could make a much bigger difference.

Playing an online game or watching a video stream might not drive up your electricity bill, but online activities usually involve more than one party. Data has to be requested, encrypted, sent, decrypted, and stored while passing through a series of data centers and internet exchanges over large distances. The energy you consume at home is just part of the equation.

How easy is it to save energy by cutting down on our internet usage?

To help you figure out how much energy you could save if you switch off one of your favorite internet-based services, we’ve put together a table of some of the most common activities. This shows you how long you’d be able to power a geothermal heat pump for (based on a small capacity heat pump using around 1,700 kWh per year) if you stopped using each internet-based service for 1 or 24 hours. You can also see how long it’d run if all of the people using the same service cut down their energy usage for the same amount of time.

For example, if you stream Netflix for an hour at its lowest quality (0.3 GB per hour), you’d consume 0.00225 kWh of electricity, which is enough to power a geothermal heat pump for 0.01 hours. But if every one of Netflix’s 213.6 million subscribers did the same, that’d run the pump for nearly 2.5 million hours or 283 years.

Our calculations are based on each GB of data consuming 0.0075 kWh (for a full explanation of how we arrived at this estimate, please see our methodology).

How much energy have some of the most popular internet-based activities consumed?

To get an idea of just how vast our internet consumption is, let’s take a look at the cumulative effect of us all using these internet-based activities.

Squid Gamers could power over 134,000 refrigerator for a year

Netflix’s latest phenomenon, Squid Game, has been watched by 111 million subscribers to date. Based on a total run-time of 485 minutes, that equates to 2 to 47 million kWh consumed (depending on viewing quality). This would power 188 to 4,396 homes in the US for one year or 5,671 to 134,434 refrigerator per year.

If all of the 100 million Apex Legends players spend their weekly average of 8 hours and 27 minutes playing the game, they’ll consume 1.46 million kWh of energy per week. That’s enough to boil a kettle 6.5 million times, making enough cups of coffee for nearly everyone in California (based on a 1.5-liter kettle making six cups).

Sending an email consumes a tiny amount of electricity (0.00000015 kWh without an attachment and 0.00000225 with), but when you consider that around 319.6 billion emails are sent per day, they add up to quite a lot of energy. Based on 1 out of 4 emails being sent with an attachment, that’s around 215,730 kWh consumed each day. That’s enough to power over 20 average American homes (based on average energy consumption of 10,715 kWh) for a year.

It would take 1.2 months for a wind turbine to generate enough electricity for 1 hour of Netflix for all users

In order for all 213.6 million Netflix users to watch an hour’s worth of Netflix, it would take a wind turbine 1.2 months to generate enough power. Netflix users require 480,600 kWh for an hour’s viewing time (at low quality) and the average turbine generates 402,000 kWh per month. But if viewing in high quality, users would require over 11.2 million kWh, which would take over two years (28 months) for a wind turbine to generate.

Around 435 million photos are uploaded to Facebook and Instagram each day, which consumes around 38,171 kWh of energy. That’s enough to warm up 477,135 baked potatoes in a microwave (based on an average microwave time of 8 minutes).

Ed Sheeran’s Shape of You Spotify streams could have done 172,000 loads of laundry

Disney+ users could generate enough electricity to power 3,519 geothermal heat pumps by switching off for an hour

Based on an average geothermal heat pump consuming around 1,700 kWh per year, the 103.6 million Disney+ viewers worldwide could power at least 274 geothermal heat pumps (if watching in low quality). Or, in high quality, they could power as many as 3,519. That’s because an hour’s worth of Disney+ for all users consumes from 466,200 to 5,982,900 kWh depending on viewing quality.

One user would have to watch 776,000 hours of YouTube to mine one Bitcoin

It takes 1,833 kWh for a single Bitcoin transaction. To watch an hour of YouTube in low definition, it consumes 0.0024 kWh. That means, for one YouTube viewer to save enough energy to mine one Bitcoin, it’d take 776,051 hours–the equivalent of watching YouTube constantly for 88.6 years! If the user upped the quality to “high,” it’d still take 27,162 hours or just under three years.

If every Netflix user switched off for 1-24 hours, how many US homes would it power for a year?

What would internet users need to do to save a day’s worth of electricity for the world’s biggest consumers?

We know what individual users can do to run an appliance or two. But what lengths would internet users have to save enough electricity to run one of the world’s biggest energy consumers?

China, the world’s biggest consumer of energy, uses 145.46 exajoules per annum. 125,93 exajoules of this energy comes from non-renewable sources (oil, natural gas, coal, and nuclear energy), which is 35 trillion kWh. This means, to replace the non-renewable energy consumed by China for one day, it would take 1.8 trillion Netflix hours.

The average Netflix user watches 3.2 hours per day, that’s a collective total of 683.5 million hours of Netflix consumed every day. So, if every Netflix user switched off for a day, that would account for 0.04 percent of China’s daily energy consumption.

Streaming high-quality Netflix isn’t one of the most energy-consuming online activities, either.

Watching YouTube in 4K consumes 0.0675 kWh–25 percent more than Netflix in UHD. Plus, with over one billion hours of YouTube videos watched every day–that’s a lot of energy consumption (a maximum of 67.5 million kWh).

Therefore, if no one watched YouTube for a week, this could generate a maximum energy output that’d provide 0.5 percent of a day’s worth of electricity for China but more than 2 days’ worth of non-renewable electricity for Sri Lanka.

Should we all start cutting down on our internet usage?

As we can see from the above figures, cutting down on our internet usage is hardly going to make a dent in energy consumption levels and emissions around the world–even if we were quite drastic in our actions. But, cumulatively, we could save quite a bit of energy.

So, which internet activity would you be willing to cut down on to save energy?

As a recent study by the International Energy Agency found, many of the figures surrounding energy use and carbon emissions are wildly exaggerated. For example, previous studies have claimed that just 30 minutes of Netflix would generate 1.6kg of CO2–the equivalent of driving nearly four miles. Reports also suggested that an hour of Netflix would use 6.1-kilowatt-hours (kWh) of electricity.

This is because it is notoriously difficult to estimate how much energy internet-based activities consume. And it’s why you’ll find figures that range from as little as 0.004 to as much as 136 for kWh/GB. The lower estimates are described as “bottom-up” estimates, whereby electricity consumption (often at an individual level of equipment) is divided by the data transferred through said equipment. In contrast, “top-up” estimates are the total electricity consumption at a network/subsystem level, divided by the total data transferred.

Older estimates may have been accurate at the time but as appliances and internet services have become increasingly energy-efficient, they are likely to over-exaggerate today’s true energy consumption.

Therefore, we wanted to ensure we avoided any over-inflation and to keep our estimates as reserved as possible.

One widely-quoted study, Electricity Intensity of Internet DataTransmission–Untangling the Estimate, provides a good indication as to how much energy consumption internet activities use while accounting for the increased efficiency of appliances over the years.

It identified accurate estimates from previous studies to provide a new estimate of 0.06 kWh/GB for 2015. It also enabled the researchers to apply their own criteria to existing studies to determine that “the electricity intensity of data transmission (core and ﬁxed-line access networks) has decreased by half approximately every 2 years since 2000 (for developed countries), a rate of change comparable to that found in the efﬁciency of computing more generally.”

Based on this calculation, we were then able to apply a new estimate of 0.0075 kWh/GB (the figure of 0.06 will have halved three more times from 2015 to 2021). We believe this estimate allows us to create conservative calculations of “minimum” energy use by certain platforms to give users an indication as to just where energy usage may be saved.

This is also in keeping with the findings produced by the International Energy Agency in 2019. In his report, George Kamiya suggests “my updated analysis suggests that streaming a Netflix video in 2019 typically consumed around 0.077 kWh of electricity per hour.” Our estimate for high-quality Netflix streaming gives us the figure of 0.053 kWh (two years later), while our low-quality figure is less than half the consumption at 0.0023 kWh.