How to watch A Suitable Boy online from anywhere

Are you looking for a way to watch A Suitable Boy online from abroad? We’ll explain how, with the help of a VPN, you can unblock and live stream A Suitable Boy from anywhere.
Mark Gill TECH JOURNALIST, VPN AND PRIVACY SPECIALIST 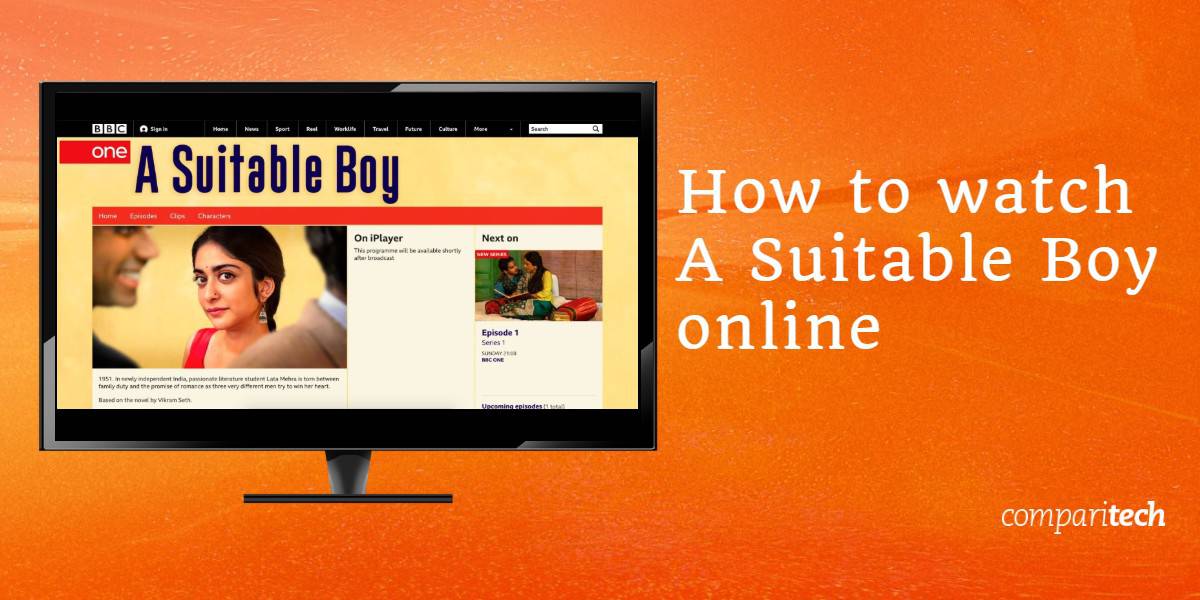 A Suitable Boy is set to premiere on Sunday, July 26, at 9 PM BST (4 PM EST / 1 PM PST). This drama miniseries is adapted from the novel of the same name by Vikram Seth and is a coming-of-age story that follows Lala, a university student in North India in 1951. Unfortunately, episodes of A Suitable Boy are region-locked which means you’ll need a Virtual Private Network (VPN) to watch while traveling abroad.

Please keep in mind that we’re only recommending official sources for watching A Suitable Boy. Although there’s likely to be unauthorized streams available, they’ll probably offer laggy, low-resolution video. Furthermore, many unlicensed streams are taken offline without warning due to copyright violations. If you’d like to watch A Suitable Boy online in the highest quality and without the risk of missing out, it’s a good idea to stick with the official sources listed below.

A Suitable Boy will only be shown on region-locked platforms. To continue watching abroad via your regular home streaming services, you’ll need to connect to a VPN.

When you connect to a VPN server, your internet traffic is encrypted and routed to the server in question. You’re also provided with a new IP address. One advantage of this is that you can browse the web anonymously. However, it also means you can spoof your location, allowing you to unblock geo-restricted content such as episodes of A Suitable Boy.

Here’s how you can watch A Suitable Boy online from anywhere:

A Suitable Boy will air live on BBC One. That’s why we recommend that you test your VPN with BBC iPlayer in advance. If you encounter any issues, you’ll have plenty of time to contact your VPN’s customer support for further guidance.

How to watch A Suitable Boy season 8 on UK TV

A Suitable Boy will premiere on BBC One. This means that in order to watch it online, you’ll need to use BBC iPlayer. The good news is that this service is free, however, you will need to sign up for an account in order to watch its content. In doing so, you’ll be asked to provide the following information: your name, date of birth, and email address. While you’ll also have to provide a UK postcode, there’s no verification and any UK postal code will be accepted.

If you’re outside the UK, you’ll need a VPN to unblock BBC iPlayer’s content. The reason for this is that it is geo-restricted. Simply connect to a server in the UK to get a UK IP address and you’ll be able to watch A Suitable Boy online from anywhere in the world. NordVPN provides a risk-free way of streaming A Suitable Boy as it comes with a 30-day money-back guarantee. If unsatisfied, you can simply request a full refund.

Where else can I watch A Suitable Boy?

Netflix has bought the rights to A Suitable Boy. Although a release date has yet to be announced, we can expect it to be available on most versions of the Netflix streaming platform. However, this does not include the US, Canada, or China. Netflix subscription prices vary by country but plans start at £5.99 a month in the UK.

Like BBC iPlayer, Netflix is region-locked. When A Suitable Boy becomes available on Netflix, you’ll need to use a VPN if you’re in a country in which this title is not available (such as the US). What you’ll need to do is connect to a server in another country (the UK, for example), to spoof your location. This will then unblock the content and let you watch from abroad.

What can we expect from A Suitable Boy?

A Suitable Boy is a six-part series with each episode coming in at around one hour. Adapted from one of the longest novels ever published in the English language, A Suitable Boy is set in 1951 in the aftermath of the 1947 Partition of India. The story follows university student Lata and her mother’s efforts to find her “a suitable boy”. However, spirited Lata doesn’t want an arranged marriage and instead chooses to embark on her own adventure.

Who are the cast members of A Suitable Boy?