The clash of two antivirus giants - Microsoft Defender and Bitdefender. Which software is better for internet security? Which is the best value? We cover it all in this comparison.
Craig McCart 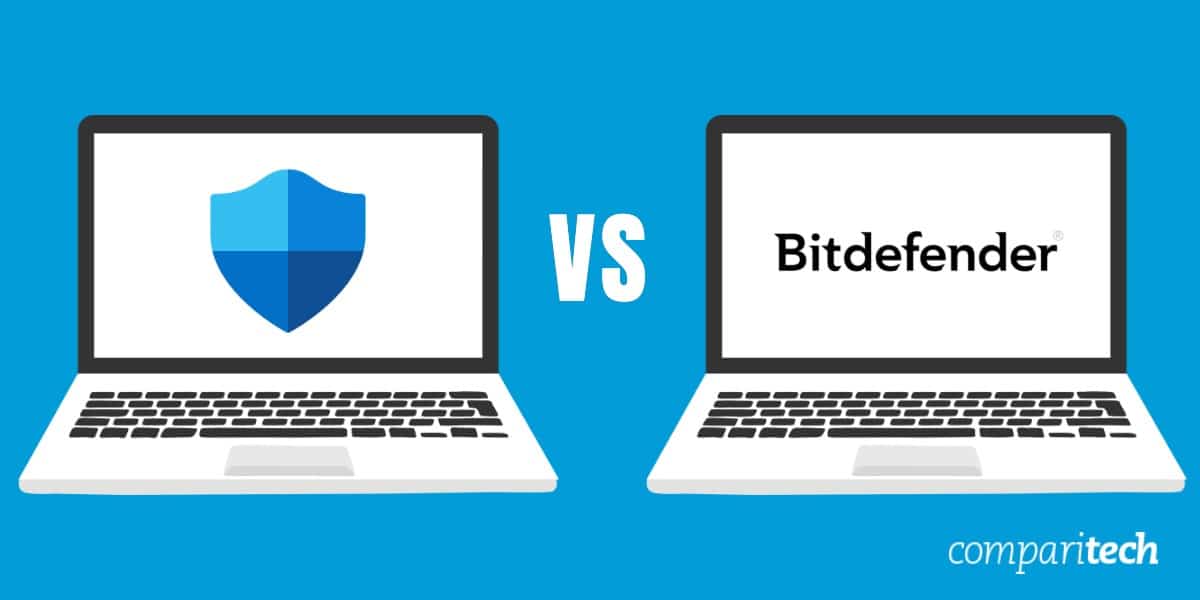 Bitdefender and Microsoft Defender have long been known to squash viruses and malware on our systems, but how do they perform when they’re put to the test? My in-depth comparison will reveal everything you need to know.

In this article, you’ll find everything from malware detection to pricing and the customer service offered by each provider. I look at things like protection against malware, features, discounts, and more to determine which antivirus comes out on top.

Not got the time to read the whole thing? Bitdefender is our winner. It is more than just an antivirus; it’s an all-in-one security powerhouse, protecting everything from your webcam and microphone to shielding your privacy with a fast and secure VPN.

Want to know exactly how I came to that conclusion? Check out the full comparison below.

BEST DEAL FOR MICROSOFT DEFENDER:Microsoft Defender is completely free so you don’t need to worry about subscription costs.

BEST DEAL FOR BITDEFENDER:Save 56% on Bitdefender Premium Security and get extra perks like a VPN and a 30-day money-back guarantee.

Bitdefender operates its HQ from Romania and has been around since 2001. There is a team of over 1000 employees working around the clock to look after their 500 million users (figure accurate as of 2018). It provides antivirus and internet security solutions for consumers and enterprises in their quest to protect the world from cyber threats.

Microsoft Defender, previously known by the alias of Windows Defender and Windows Defender Antivirus, is owned by Microsoft and forms part of the broader Windows Security suite. The first installment of the software came as a free download in 2001 for Windows XP users and has since evolved to cover a wide range of internet security tools.

Microsoft Defender doesn’t technically have a pricing plan, it’s a free antivirus solution that integrates with Windows. That’s it. When you purchase a PC or laptop with Windows 10 or 11 pre-installed, Microsoft defender will already be active until you install another antivirus application.

Likewise, if you purchase the Windows 10 OS or upgrade from a previous OS, Microsoft Defender will be up and running.

Microsoft does have a solution for enterprises it calls Microsoft Defender for Endpoint, which provides businesses with an on-hand Microsoft Security engineer to intervene when things get dangerous. This solution aims to protect devices and networks from more sophisticated cyber security threats compared to the less extreme attacks launched against home users.

Bitdefender is a different ball game, offering its users four pricing levels to choose from. The higher you climb up the pricing tiers, the more features you get.

To give you an overview of what you’ll be getting from each level of pricing, I’ve provided a summary of them below.

First up is Bitdefender Antivirus Plus, the company’s basic level of protection that first-year users can get for $29.99. After 12 months, this creeps up to $59.99 annually. As well as antivirus and malware protection, you’ll get anti-phishing, anti-fraud, and ransomware protection. It also includes Autopilot, which gives you tips on system performance enhancements. Dissimilar to Microsoft defender, it also gives you a VPN to protect your online privacy, although this comes with a 200MB daily limit per device.

The next plan starts at $34.99 for the first 12 months and then rises to $79.99 after that. Bitdefender Internet Security comes with all of the features you get with its base plan, but it also includes social Network Protection, a Password Manager, Microphone Monitor, and webcam monitoring.

It’ll cost you $39.98 for Bitdefender Total Security in the first year, and then it goes up to $89.99. This plan has tools that speed up your system and supports macOS, iOS, and Android (Antivirus Plus and Internet Security plans are Windows-only).

My recommended plan is Bitdefender Premium Security, as it has all the features of the rest of the plans in addition to unlimited VPN data, parental controls, a privacy firewall, and network threat protection. First-year sign-ups will pay $74.99, and then it renews at $149.99.

Each Bitdefender plan includes a 30-day money-back guarantee, so you can try the product features, and if you aren’t happy, you can get all of your money back.

Bitdefender has apps for Windows, iOS, Android, and macOS, whereas Microsoft Defender only works with Windows 10.

Most of us look to antivirus software, assuming it’ll handle viruses and malware at the very minimum, before focusing on the other security features. To make sure Bitdefender and Microsoft Defender were up to the malware challenge, I carried out a few tests to see how good their detection is.

In theory, the real-time detection tool for each software should pick up the malware the moment I download them.

Bitdefender and Microsoft Defender blocked each of the samples instantaneously. 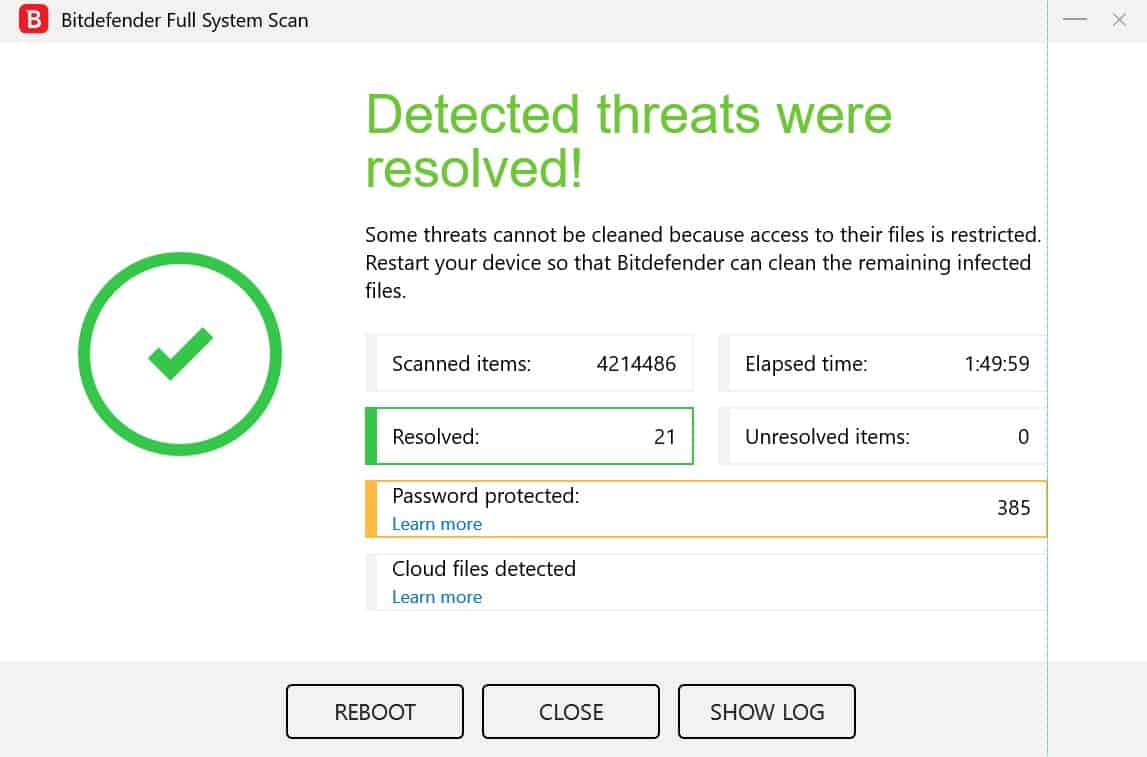 I disabled real-time protection and downloaded the samples again. I ran a quick scan, but neither of the application tools picked the samples up.

I researched further to see how some of the world’s leading test bodies benchmarked each provider in their tests.

A real-world detection test by AV-Comparatives put each provider up against 743 threats to see if they’d block them. 741 of the threats were picked up by Microsoft Defender and Bitdefender, both providing a 99.7% detection rate.

Antivirus software becomes a nightmare if it slows down your system when running in the background or performing scans. To see how much of an impact each provider had on my PC, I performed some extra tests.

In contrast, Microsoft defender only scanned 302823 files and took 186 minutes to complete. The quick scan was much faster, though, finishing in 19 seconds.

I ran the Windows performance monitor during a full scan by each program for 60 seconds. I also ran the same analysis to see the performance while the processes ran in the background.

I checked the benchmarks available with AV-Test and Av-Comparatives to see how they scored each provider.

For context, AV-Test provides a performance score out of 6.0. Both Bitdefender and Microsoft Defender achieved the full 6.0 during the benchmarking.

AV-Comparatives’ testing uses the following categories to rank the security software it tests, including the following:

The performance test showed that Microsoft Defender failed on the file copying category for first-run tests and unarchiving/archiving. In contrast, Bitdefender slipped up on launching applications and file copying during the first runs.

Next up, I looked at the extra features provided by each internet security suite rather than simply analyzing the malware and antivirus properties. Check out the features below to see what you’ll get with each provider.

To give you a clearer idea of the exclusive features each provider offers and how they’ll benefit your internet security protection, I’ve provided a closer look below.

Signing up for an internet security product should be a straightforward process, so I signed up for Bitdefender Premium Security to make sure I didn’t need to jump through hoops to protect my system. 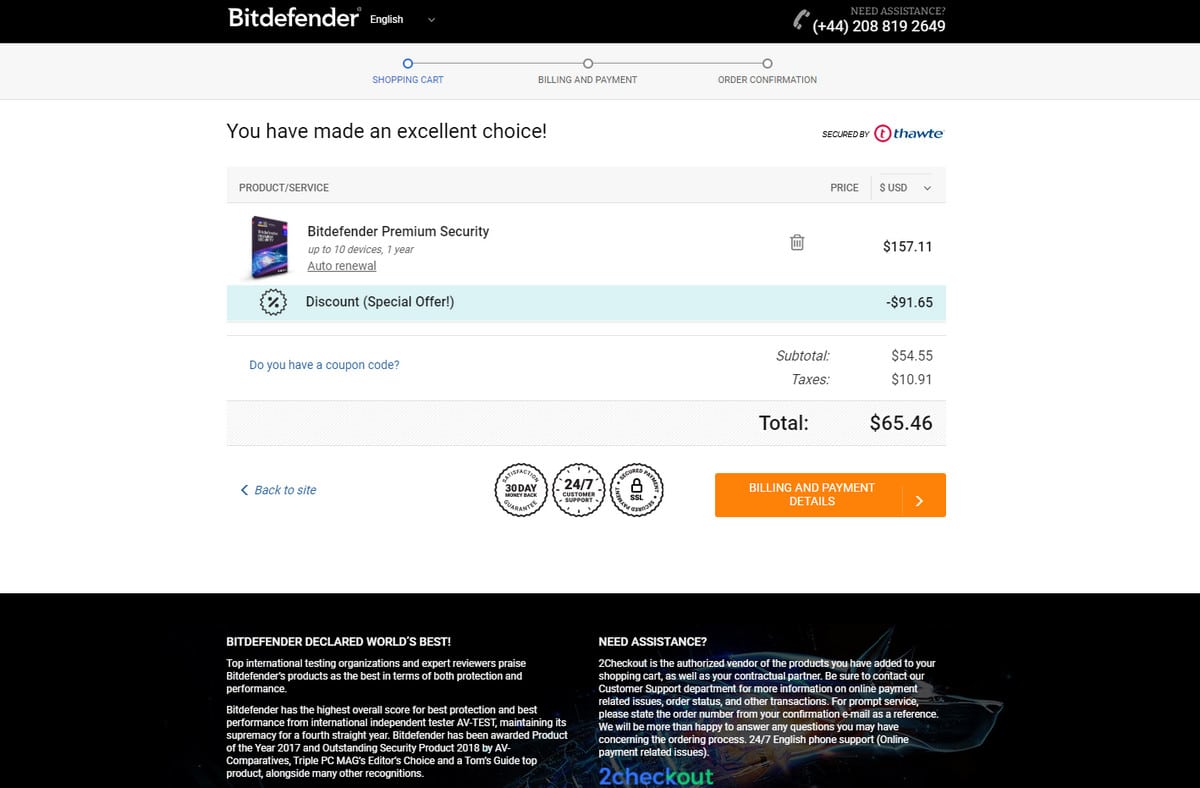 You only need to enter a few details like your name, email address, and home address for registration, as you’d expect. You can pay by PayPal, credit, debit card, or wire transfer, and once you complete checkout, you’ll be redirected to a downloads page.

The software was downloaded within a couple of minutes, and the setup wizard was easy enough to follow. I was running my first scan in less than ten minutes.

Microsoft Defender doesn’t compete in this category as there’s no sign-up required.

Clean, eye-catching, and easy to navigate is what most look for with any software application, so I took a closer look at each provider to see how they matched up in this category.

Microsoft Defender ticks the box for the clean and simple interface, which tailors to beginners but lacks some advanced options of other software. The software forms part of the broader Windows Security suite and can be accessed from the settings within Windows 10 and 11.

At a glance, you’ll see an overview of areas that need your attention with a yellow warning and priority actions marked in red. When everything runs smoothly, everything will be green. 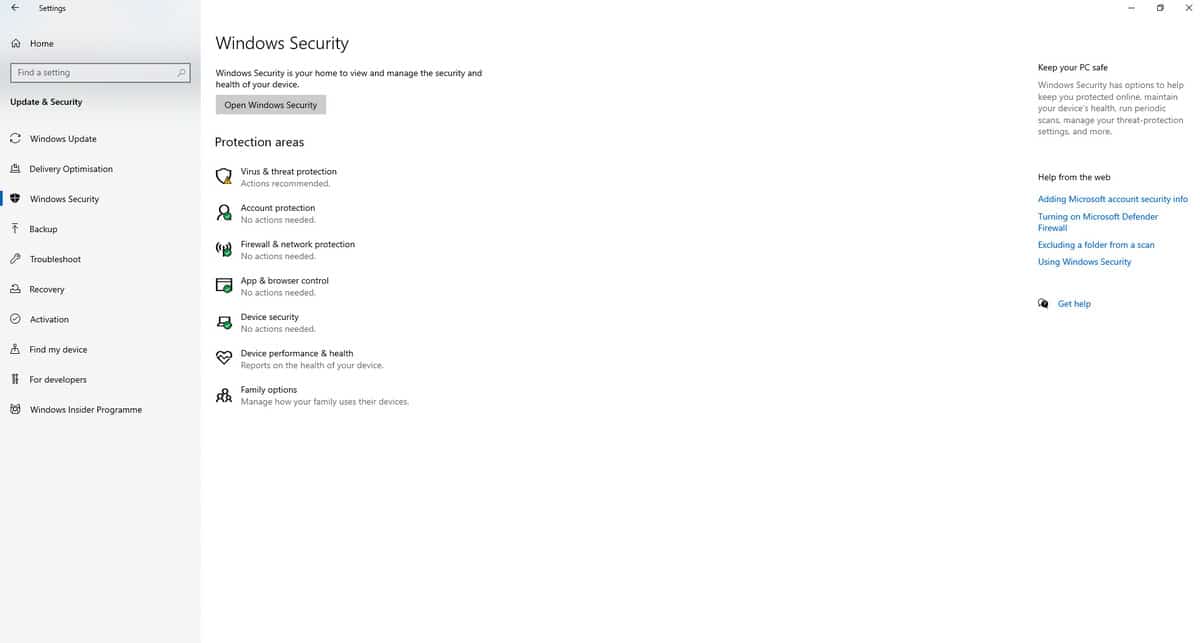 You can click one of the tabs to drill down into additional options. For example, selecting Family Options will show your parental controls, which you can tweak, such as screen time for children or online protection. 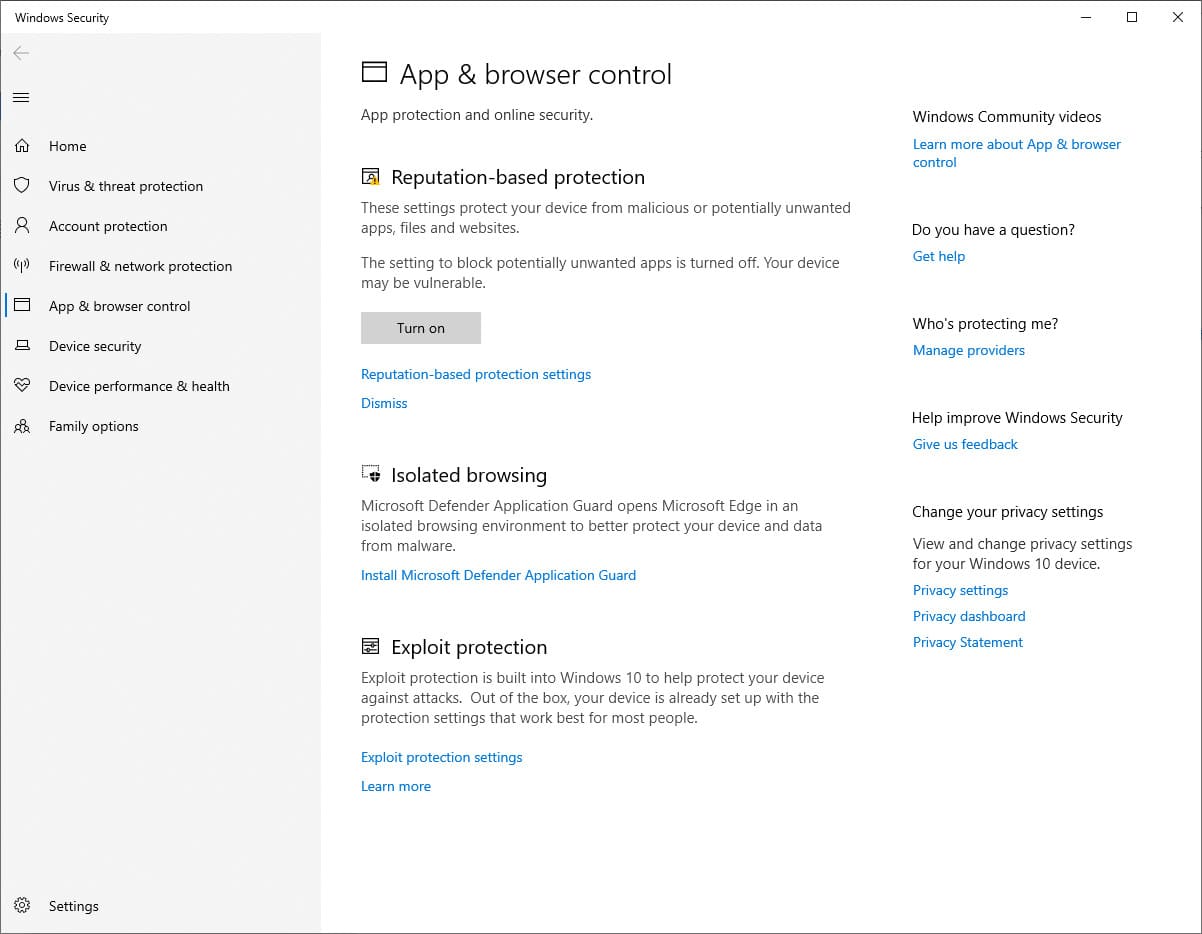 Antivirus and Threat protection lets you run scans, see scan history and enable ransomware. There’s not a huge range of options with Microsoft defender, but it gives you peace of mind that you have basic protection if no other protection is installed.

Bitdefender Premium Security is much more comprehensive, consisting of a more corporate and professional-looking user interface. The most used features are right in front of you on the main dashboard, letting you run scans or enable the smart firewall with a couple of clicks. A broader list of the functions you can perform is available in a left-hand menu pane, making it easier than ever to get on with the tasks you need. 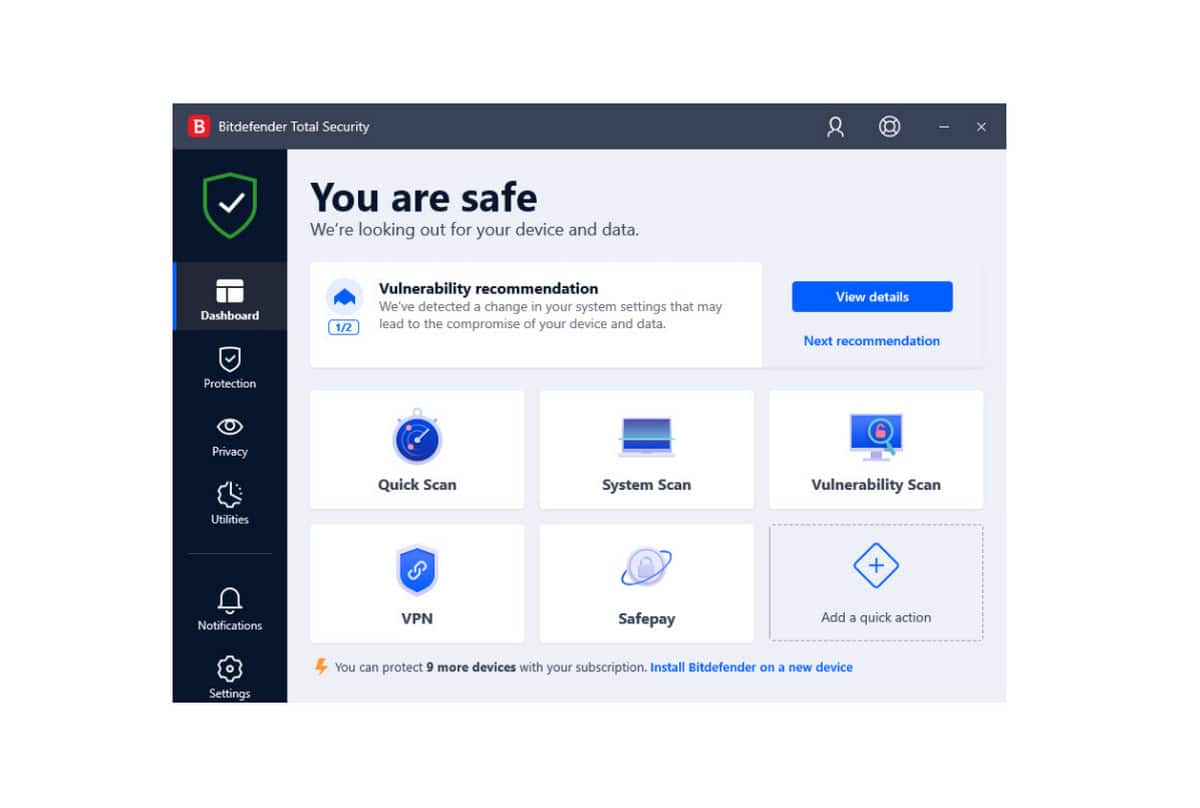 It’s good to know there’s help available when you need it. Unfortunately, that help isn’t there with Microsoft Defender unless you’re a Microsoft Defender for Endpoint customer. The rest of us are limited to using Microsoft’s community forum when we need help with its security suite.

Bitdefender Premium Security has a much more attractive range of support options, including LiveChat and phone support during operating hours for those times when issues can’t wait for a response. A knowledge base is packed full of useful resources that aim to resolve the most common queries or less urgent questions.

Did you avoid the spoiler at the start of this article declaring the winner? Even if you didn’t, let me provide a recap of why Bitdefender Premium security came out as triumphant over Microsoft Defender.

Not only is Bitdefender packed full of helpful privacy-shielding features like an unlimited VPN, microphone, and webcam protection, but it provides a variety of huge discounts to meet consumers’ budgets. It performed remarkably in my malware tests, its dashboard is super intuitive, and customer support is there whenever you need it.

Is Microsoft Defender good enough to protect my system?

Yes and no. Microsoft Defender integrates with Windows 10 and 11 to provide a basic level of protection from malware and virus threats, but it's missing lots of the other features offered by Bitdefender Premium Security, like a VPN and webcam protection.

Absolutely. Bitdefender runs the first scan when you install it to look for any infections hiding on your system, and once removed, real-time scanning will monitor your device for any new threats and block them.

Yes, although this isn't usually the case with other antivirus software. We'd never usually recommend running two antivirus apps at once, but when you install Bitdefender on Windows, Microsoft Defender automatically disables some of its features so that Bitdefender can do its thing to protect your system.

How much cloud storage is included with Windows Security?

Windows users will get 5 GB cloud storage with OneDrive, but you can upgrade at any time to backup more of your files. You get the free OneDrive storage whether or not you use Windows Security, so feel free to try BitDefender or another antivirus program.