Norton vs TotalAV: Which is best?

This Norton vs TotalAV antivirus comparison looks at the features offered by both providers such as protection, ease of use, value for money, and performance to see which is best.
Steve Adams 15+ years experience in the tech, privacy and security space 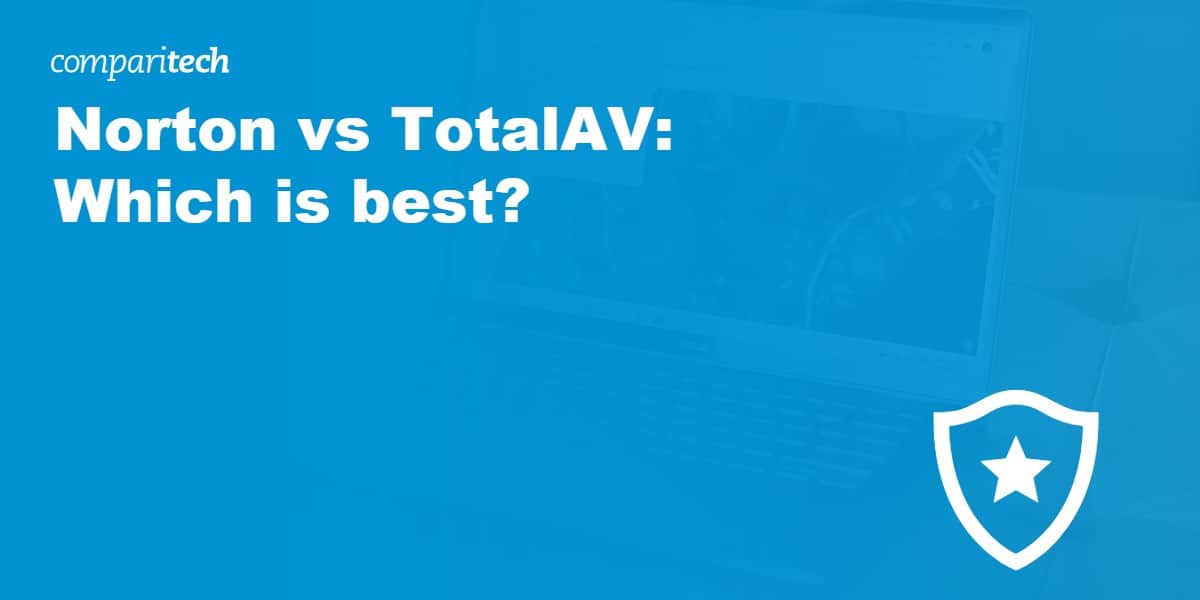 The internet has opened avenues that were once thought impossible, but innovation has brought along dangers too. Malware and cybercrime represent a real threat to internet users’ privacy. Thankfully, antivirus software can help.

Can’t wait to find out who the winner is? Norton is my recommendation. Norton offers a range of very useful features which help secure your data. It also helps protect younger users of the internet by including parental controls. Norton came out on top for malware protection during my research with excellent results.

DEAL ALERT: For those on a tight budget TotalAV offers a very competent antivirus product that is currently discounted to $20.

Read on to find out more about Norton and TotalAV and all the features they have to offer.

Developed by Symantec Corporation, Norton has been around since 1991. It’s a very popular choice for consumers, and one of the leading antivirus software providers on the market. Norton held a 61 percent US market share in security suites back in 2007. Over 50 million people have purchased Norton worldwide. This software protects the data of individuals and businesses all over the world.

Still rather new in the antivirus world, TotalAV antivirus software has become well-established against its competitors. TotalAV has won an array of awards for its features and malware detection. With over 25 million users trusting TotalAV to protect them online, it is clearly popular with consumers. It is currently registered in the United Kingdom and owned by Protected.net Group Limited.

One of the first things to consider when choosing antivirus software is the price. Below you will find an outline of the prices and packages Norton and TotalAV have to offer.

As you can see in the table above, Norton’s standard and premium products vary largely in price. Prices start at $59.99 per year and go up to $149.99 per year. There is a wide range of products available to choose from on Norton’s website, including one just for gamers. Nortin 360 with Lifelock Select offers the most with parental controls and the option to cover five devices.

TotalAV’s pricing structure is very simple. It offers both paid and free versions. The paid version allows you to protect three, five, or even six devices.

At the time of writing, both Norton and TotalAV offer discounts. Norton offers discounts on your first year’s subscription. Norton 360 Deluxe is 52% off for the first year, making it an affordable $49.99. Of all the discounts from Norton, this is one of the biggest we have seen yet. TotalAV also offers a discount of 90 percent off the paid version. This makes TotalAV Antivirus Pro only around $29 for three devices. You will then be charged the full fee once the first year’s subscription is completed.

If you are unhappy, Norton allows you to get your money back within 60 days of purchase. TotalAV takes a different approach by providing you with a free 30-day trial.

You will be pleased to know that Norton and TotalAV work with all major operating systems including Windows, MacOS, and Android devices.

There are many ways malware can affect your operating system. Malware includes Trojans, worms, ransomware, and more. Such threats grow as technology develops. I conducted some tests to discover the effectiveness of Norton and TotalAV against malware.

As the table shows, Norton blocked the first EICAR sample. It also blocked the two zipped EICAR samples upon extraction. Norton performed well against malware threats, detecting and deleting three live samples. TotalAV only blocked one EICAR sample and allowed the other three. The live samples were all detected but they were not blocked from being downloaded. It is clear to see that Norton performed better in fighting malware threats.

To further back up my findings, I decided to look at recent independent tests conducted by third-party organizations. These include AV-Test which assesses the protection of antivirus software. Norton scored 100 percent in its most recent test from May 2020 and June 2020. TotalAV scored slightly lower with 98.2 percent in May and 98.9 percent in June.

I also looked at another independent testing site which reports on the protection levels of antivirus software. AV-Comparatives’ most recent Real-World Protection test summary from February 2020 to May 2020 gave Norton a 100 percent protection rate. TotalAV once again scored less with 98.5 percent.

False alarms occur when an antivirus identifies safe files as a threat, and can be quite confusing and inconvenient for users. I found Norton registered 28 false positives while TotalAV only had two false alarms. Nevertheless, the superb protection that Norton offers helps make up for its poorer performance in this test.

Weighing up all the evidence from my own findings and the latest statistics from leading testing websites, Norton is the winner of this round. It performs admirably in nearly every task, and offers the greatest protection against malware.

If you use your PC regularly, it’s vitally important to make sure your antivirus software doesn’t negatively impact your PC performance in terms of things like CPU and memory utilization. I ran some tests to see the effects Norton and TotalAV had on my PC whilst running a full and quick scan.

The table above outlines the results of full and quick scans on both Norton and TotalAV.  Norton’s full scan took 121 minutes compared to TotalAV’s 199 minutes. Norton also scanned a great deal more items than TotalAV’s 120,000, resulting in a more thorough check. TotalAV’s quick scan resolved in 1,720 seconds which is much longer than most leading antivirus software. Norton’s quick scan took just 171 seconds which isn’t the best out of all competitors, but still respectable.

The table also shows the impact made on my PC’s performance when no scan was processing and when a full scan was running.

To back up my findings, I looked at AV-Comparatives’ recent performance test from April 2020. This test is particularly helpful in showing the impact antivirus software has on PC performance when engaged in eight tasks:

It is evident from my own data and independent tests that Norton, once again, comes out on top. TotalAV only scans a fraction of what Norton covered with a full scan and uses more resources when performing scans.

I have compared pricing, performance, and malware tests so far, but now it is time to look at the functionality of Norton and TotalAV. Comparing antivirus software can be quite confusing, so I have chosen some of the standout features from each.

50GB cloud backup: This allows you to store and secure your important files and documents, offering protection against failures, stolen devices, and ransomware.

Parental controls: It is vitally important to protect your children online. This manages your children’s digital activity, keeping them safe and secure.

PC SafeCam: This feature notifies you if hackers try to access your webcam., leaving you safe in the knowledge that your privacy is safeguarded.

Cloud scanning: Cloud scanning ensures your device is scanned and protected quickly and efficiently. It is the quickest protection against zero-day malware threats.

System tune up: Want to maximize the performance and speed of your device? This tool determines any potential areas that could help your device run smoother.

Protection against phishing scams: This important tool blocks the latest phishing URLs, protecting you against any dangerous scams that may target your device.

There are many great features offered by both Norton and TotalAV. The tools go beyond just malware scanning to deliver important protection in other areas. Norton stands out as it includes more comprehensive features that focus on the security of the user. Norton protects your personal information and keeps you safe.

Signup and installation should be an easy task. This isn’t always the case, but whether you’re a novice or an advanced user, the process with both Norton and TotalAV is quite simple.

Norton’s website includes a yellow Subscribe Now button. Clicking this takes you to the subscription form where you can see a summary of your order. This page is easy to understand and Norton outlines the number of devices covered and the level of backup storage you are getting. It also shows compatibility and renewal costs for the next year. If you don’t want to renew, you can simply add a reminder to your calendar. Although not automatically included, there is also the option to add Norton Computer Tune Up for an additional $9.99.

As soon as you select the product you want, TotalAV takes you immediately to checkout. As with Norton, TotalAV distinctly shows you how much you are saving. It also states how much ‘free tune up’ and ‘free additional devices’ are, and the screen then shows that they are added to your product.

An interface is essential for any software that is installed on your device. If you’re going to use it often, it’s important that it’s straightforward and intuitive.

As you can see below, Norton’s dashboard is displayed in its signature colors of yellow and green. It clearly shows the status of your current protection along with details of the number of licenses that are used. Security, backup, and performance status is shown in the bottom panel and is easy to understand with the use of clear icons and labels. There is the option to access a web portal that allows you to manage all of your devices.

TotalAV has a very simple design. For more novice users of antivirus software, this could be comforting to see. The screen immediately informs you that you are protected as soon as it is opened. You are then asked to run a simple smart scan. Settings can be adjusted via the left-hand icon.

The best antivirus software providers offer excellent customer support. Norton offers around-the-clock support for all of its products, including the lower-priced option. There is a live chat support function which is helpful, along with online communities, FAQs, and support on social media platforms. Norton really stands out from its competitors with such thorough support.

TotalAV offers 24/7 live chat support via its website. This is quick and easy to use, and the most popular method of communication with TotalAV’s users. You can alternatively phone or email, or use the comprehensive FAQ and support pages on TotalAV’s website.

In conclusion, I have found that Norton is the winner. Norton outperforms TotalAV in just about every area including malware protection in my own and independent tests. Although TotalAV is somewhat cheaper, you can’t put a price on protection, and Norton clearly provides the greatest all-round protection for your devices.

FAQs about Norton vs TotalAV

Can I run Norton and TotalAV at the same time?

We recommend against using Norton and TotalAV at the same time, as they will likely work against each other, leaving your computer unprotected. Additionally, a software conflict caused by the simultaneous use of antiviruses can cause significant harm to your device.

What are the benefits of using a VPN?

There are several key benefits to using a VPN, including enhanced security and privacy, improved access to blocked content, and better protection against cyber threats. By encrypting your data and hiding your location, a VPN can help keep your information safe from hackers and other malicious actors. Additionally, a VPN can bypass geographic restrictions on certain websites and online services, giving you better access to the content you want.