Panda vs AVG: Which wins?

Both AVG and Panda are trusted to protect against online threats, who does it best? This antivirus comparison will help you find out.
Steve Adams 15+ years experience in the tech, privacy and security space 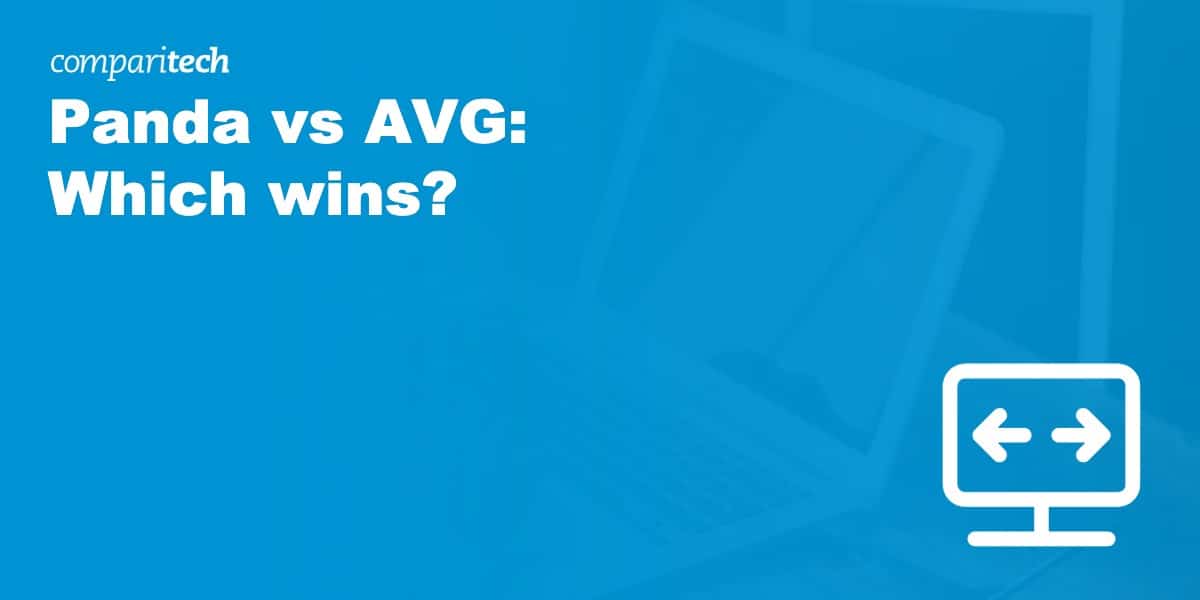 AVG and Panda are popular brands of antivirus software. They may not be as well known as the biggest brands in the sector like McAfee or Norton, but that is even more reason to take a closer look at what they offer.

In this comparison, I’ll look at the pros and cons of each program by testing their effectiveness against malware and their impact on PC performance. I’ll also consider other important issues such as interface design, customer support, and pricing.

I’ve run Panda and AVG through my own set of malware tests to assess how well different kinds of threats are detected and eliminated on my PC. To further analyze the software, I also look at some recent independent antivirus lab benchmarking tests.

If you don’t have enough time to read the detailed version of my comparison, I can reveal that Panda is my winner. It beats AVG thanks to its top virus detection rates and solid performance, as well as a number of useful additional features including a VPN and parental controls.

If you’re still undecided, you can read the full comparison below.

Below is a list of the features included in both premium antivirus suites.

BEST DEAL FOR PANDA:Save 50% on all Panda Packages and get a 30-day money-back guarantee.

BEST DEAL FOR AVG:Save 33% on AVG Ultimate and protect up to 10 compatible devices.

Panda has been in operation for 30 years but has recently been making big strides in the antivirus market. The first Panda Cloud Antivirus was released in 2005, and the technology has been advancing ever since. The use of cloud software helps to isolate and protect against the latest zero-day malware threats, keeping users’ devices secure.

AVG has grown to more than 200 million active users, and thanks to its free antivirus version it has become popular on mobile devices. The company has a shared focus on building software products for businesses and home users.

Of note was its acquisition by Avast in 2016, which allowed Avast and AVGs products to share the best features they each had to offer. In late 2020, Avast was acquired by NortonLifeLock (formerly Symantec), the maker of Norton Antivirus.

Price is a key consideration when choosing an antivirus. The lowest-price software is not necessarily always the best option, as we need to evaluate what you’re getting for your money to discover which offers the best value.

AVG and Panda offer a range of products to appeal to different users, and each tier includes different functions in addition to the antivirus scanner itself.

Below, I show the costs for different products in the AVG and Panda range and discuss what is included in the price.

Both companies offer savings for new customers on the first year of subscription, although Panda’s discounts are more wide-ranging than those offered by AVG. At the time of writing, AVG only offered a deal on the Ultimate version of its software. There’s a 35 percent saving available, cutting the cost of the first year from $119.99 to $77.88 (GBP £86.93 to £56.42).

If you find that the software is not right for you, Panda lets you try the first month free and you can cancel your contract within 30 days. AVG also offers a 30-day cancellation period.

Both programs work with Windows, macOS, and Android devices.

Which antivirus is the most effective at identifying and handling malware? To find out, I downloaded a number of malware test files to see how each program dealt with the threats. I also examined each program to see how it managed live threats such as adware and trojans.

To perform these tests, I used test files from the EICAR (European Institute for Computer Antivirus Research). For this test, I turned off the real-time detection tool and instead ran a scan to see if the downloaded files were picked up as malicious. The results of the test can be seen in the table below under the EICAR sample headings. The first two files were single files, while the other two test EICAR files were in zip folders.

Both Panda and AVG delivered the same results on the EICAR samples. Both programs blocked the first two files and allowed the third and fourth files. That said, upon attempting to extract the zipped files, both Panda and AVG blocked them, keeping the system safe.

Next, I looked at three live samples and although Panda blocked the files, it allowed them up until they were about to run as programs. Panda did prevent any damage from being done, although it’s unusual to not block the malware before this stage.

AVG blocked all three of the live malware files immediately. 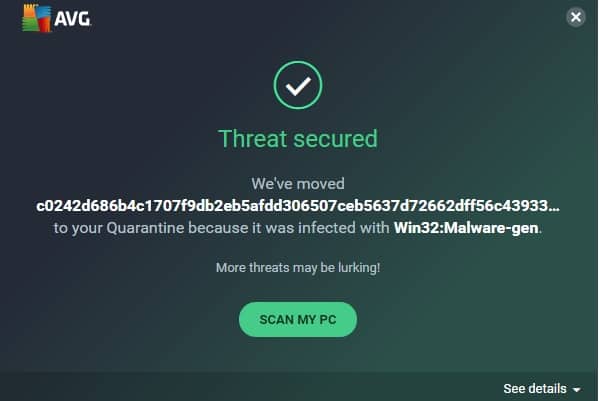 In addition to my own tests, I looked for evidence from tests carried out by leading independent antivirus labs. The latest real-world protection test from AV-Comparatives was completed in 2020 and found Panda blocked 99.9 percent of the 734 test malware samples. AV-Comparatives found that AVG blocked 99.7 percent of all sample threats it faced in the same time period.

I also looked at the most recent false alarm test to gauge the accuracy of each program in detecting threats. This test determines the number of times each program identifies a safe program as malicious in the defined time period. A lower number of false alarms is preferred. The test was run during March 2020 and featured 17 different antivirus brands.

AVG and Panda didn’t rank well. Both products registered far more false alarms than the top performer, TrendMicro, which had a score of just one. AVG recorded 15 false alarms placing it in joint ninth. Panda recorded 48, placing it at the bottom of the list. False alarms cause concern for no reason and can be a hindrance to the user, so it’s worth keeping these results in mind.

Despite both programs failing in the false-alarm test to some extent, the protection results are impressive. In my own tests, they blocked all the threats, preventing damage to my PC.

With a 99.9 percent protection rate for Panda and 99.7 percent for AVG in the AV-Comparatives test, we can be sure they are both effective.

Due to its slightly higher percentage, I will give the victory to Panda in this section.

Performance is another key aspect. We want an antivirus that protects us without slowing down our computer to a snail’s pace. Thankfully, antivirus scanners have come a long way in recent years and are no longer as detrimental to performance as in the past.

To find out exactly how each program affects my PC, I’ve recorded some numbers to see the impact when idle and when running quick scans and full scans. The quick scan results are available in the table below.

The table shows that Panda has a lighter system impact on CPU, memory, and disk utilization when compared to AVG.

The following table highlights how my PC’s resources were affected by both antivirus programs during the full scan. It also shows how long a full scan took to complete, plus how many items were scanned in that time.

The results show that Panda takes 40 minutes to complete its full scan compared to AVG’s 35 minutes. AVG scanned a larger number of items in that time (403,167 items compared to Panda’s 241,385).

In addition to my own performance tests I analyzed some independent tests run by AV-Comparatives showing how PC performance is impacted during eight common tasks:

In the AV-Comparatives performance test from April 2020, Panda scored very fast on all tasks apart from archiving and unarchiving where it still was rated as fast.

AVG was ranked as very fast for all tasks apart from downloading files and launching applications on first and subsequent runs for which it was rated as fast.

There is little to separate the two programs here, but Panda scored slightly better in the AV-Comparatives tests.

Other than the malware scanning engine, many antivirus programs include a number of features that can be useful to user security. Below is a list of the extra features included with Avast Ultimate and Panda Premium to give an idea of what you get for your money.

I will pick out a few of the most useful of these features from each provider, to help you understand which may best suit your requirements.

Panda makes it easy to compare the packages on offer and choose the one that suits you best. Once you’ve made your choice, it’s quick and painless to checkout and download the program.

AVG’s Ultimate package includes lots of extra features, and the landing page splits into three separate pages to give you all the details.

You can choose to quickly progress to the checkout by clicking one of the buttons encouraging you to buy the product. The checkout is simple and once you have paid and downloaded the installer files, you will have the program up and running in 10 minutes or less.

The screenshot below shows the Panda interface. The layout is a grid system with different-sized squares linking to the tools and features of the suite. It provides quick access to the important tools you’ll need most often, saving time and effort. The dark blue, light blue, and white color schemes work well. 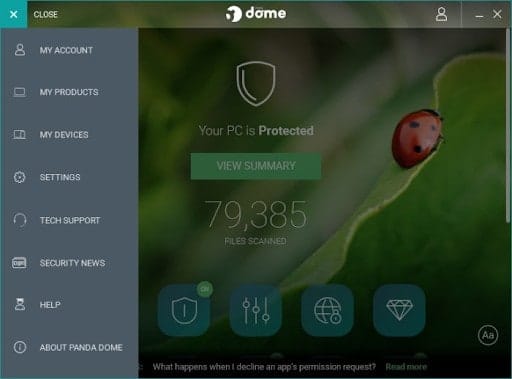 AVG uses a bold black and green color scheme with a similar grid layout to that used by Panda. It breaks down each type of protection and reassures with a protected label.

The center of the home screen is dominated by a Scan Computer button, placing the emphasis on the antivirus scanner itself, which makes sense.

AVG has a slightly more aesthetically pleasing look and a less cluttered interface, but there is not much to choose between the two.

For those new to antivirus programs or experienced users using a new antivirus provider, it might be necessary to call on some help. Reliable customer support is important for this reason.

Panda’s standard support is provided by AnyTech365. This includes email and phone support, and users can also access FAQs and a setup guide. Panda provides a premium support package at an extra cost.

AVG has a range of free support options available on its website, including FAQs, a download center, and a community forum. You’ll have to pay extra for additional support features but the free version should be sufficient for most users’ needs.

In conclusion, I have found that both Panda and AVG are close in a number of areas, including malware protection. Panda just has the edge in this regard thanks to an impressive 99.9 percent protection rate. Pricing makes Panda slightly more expensive than AVG, although the first-year discounts available level this out somewhat.

For speed and performance, Panda just had the edge in a tight contest. The AVG Ultimate additional features list is slightly longer than Panda’s, but both programs do provide good value for money.

Overall I’ve picked Panda as my winner in this comparison. Its light system impact and 99.9 percent protection rate in recent independent tests make it a great choice.