You may have heard of Man in the Middle attacks. One subtype of this attack is called a Man in the Browser attack (MitB). We look at what MitB attacks are and what you can do to prevent them.
Marc Dahan Specialist in online privacy 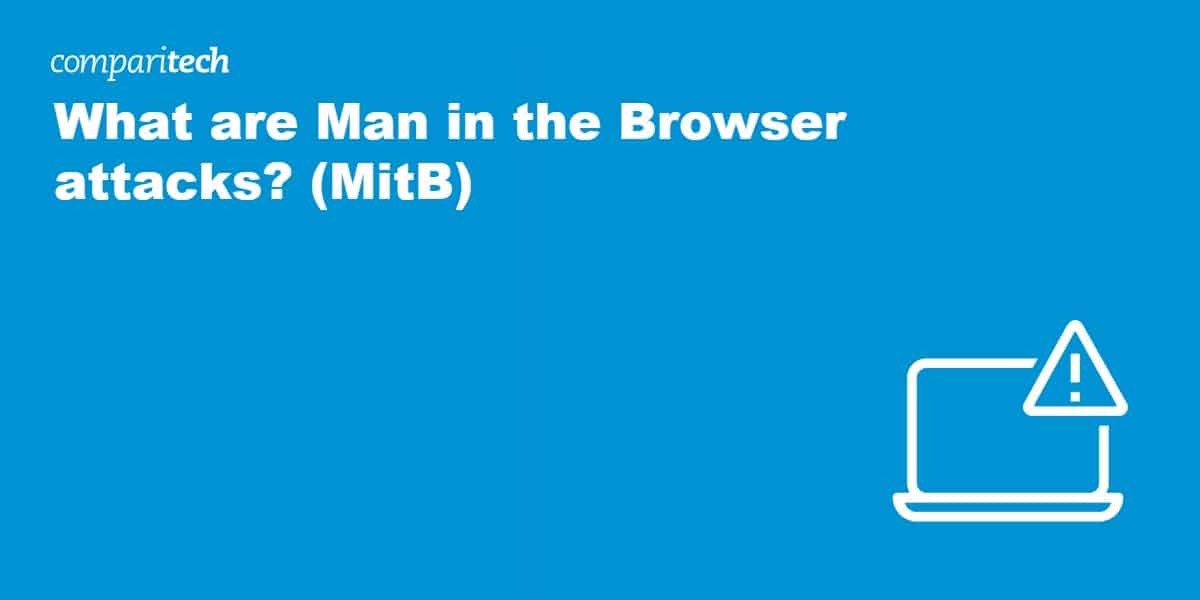 A sub-type of MitM attacks is the Man in the Browser attack (MitB). A MitB attack is similar to a MitM attack, but the MitB attack is restricted to your web browser rather than being system wide. However, that doesn’t make it any safer.

In this article, we’re going to explain how MitB attacks work and how you can defend against them. We’re also going to be providing MitB attack examples along the way.

What is a Man in the Browser (MitB) attack?

One of the biggest differences between a MitM attack and a MitB attack is that the latter takes place at the application layer (intercepting and altering browser content) instead of the network layer (intercepting and modifying data packets in transit). That means that the attack can succeed regardless of whether or not the site you’re viewing is secured with SSL (HTTPS).

In either case, this provides the attacker with the ability to view the messages being sent and received by the infected browser and to alter them.

The user will not receive any hints that something’s amiss. The URL at the top of the browser will be correct, so inspecting it won’t prevent the attack and, if enabled, the browser’s “malicious site” warnings won’t be triggered. The web page will appear completely legitimate even though it’s just been tampered with by the attacker.

Social engineering is the attack vector

As with many, if not most, online attacks, social engineering is where it all begins. When your computer is infected with a MitB trojan, the entry point will typically have been some form of social engineering. A fake Facebook post, a spam email with a malicious link or attachment, a dodgy pop-up window, etc.

The internet is a hostile place. Don’t be too trusting – there’s no shortage of those waiting to abuse your trust online. Treat the internet like one big misleading infomercial and always look at the fine print.

We’ll provide some advice on avoiding trojans towards the end of this article.

Man in the Browser attack example

A successful MitB attack can control the victim’s browser as follows:

A successful MitB attack could also hijack your session (steal your cookies to bypass logins) or perform a replay attack.

Man in the Browser attack flow

Here’s what a common MitB attack can look like:

It could take days for the victim to realize that the funds were not transferred to the intended account. And when they do, they may not immediately suspect that the issue is with their browser. And the bank will state that they received a request for the funds to be transferred to the attacker’s account. And they’ll be telling the truth. By this point, the account will likely be closed, and the entity behind it will be impossible to track down and will probably not have been a real person to begin with.

The above is just an example. MitB attacks don’t follow a fixed playbook, other than being nasty attacks that tend to target your financial information. In the above example, the attacker could have inserted a new text field for additional personal information to be entered on the banking website to harvest that information to perpetrate another attack at a later date.

Clampi is a known Man in the Browser banking trojan. It was designed to harvest and transmit personal information – more precisely, banking information – from the victim’s computer to a server controlled by the attacker. This strain of trojan specifically targeted Windows computers and was first observed in 2007.

The SpyEye trojan affects Google Chrome, Opera, Internet Explorer, and Firefox on Windows systems. Aside from providing the attacker with access to the compromised computer, the trojan also works as a keylogger. A keylogger records a computer user’s keystrokes to obtain credentials and sensitive information like credit card numbers.

The SpyEye trojan can insert new text fields into the web page the victim is viewing and can also modify legitimate text fields on the web page. This enables the trojan to prompt a user for sensitive information and make away with passwords, usernames, bank account, and credit card numbers. SpyEye can even display a user’s fake balance while hiding the fraudulent transactions from them.

The SpyEye trojan originated from Russia in 2009, when it was sold on the Dark Web at prices exceeding $500.

First discovered in the wild in 2009, the Carberp trojan was designed to target Facebook. Carberp can check the status of your internet connection, connect to remote sites over the internet, download other malware, and run files. Pretty nasty.

If a user with an infected web browser accessed Facebook, it would replace any page visited by the victim with a page stating the victim’s Facebook account had been temporarily locked. It further asked for the user’s name, date of birth, email address and password, and 20 euros to confirm their identity and unlock the account.

On the plus side, we know where this trojan gets installed, so you can always check to see if you’ve been infected:

The Zeus trojan typically spreads through drive-by downloads and social engineering/phishing. A drive-by download is a download that unknowingly occurs when downloading something else. A good example of this is Google Chrome being automatically installed when you install another program, such as CCleaner, on Windows computers. In Chrome’s case, the drive-by download is innocuous, but it can just as easily be malware.

How to detect a MitB attack?

One of the nastier aspects of a Man in the Browser attack is that it’s almost impossible to detect. When you fall victim to a MitB attack, there are no new processes to detect or funky URLs you can inspect. Everything appears to be as it should.

However, there are still a few subtle giveaways that can sound the alarm. These hints aren’t exclusive to MitB attacks and could be the symptom of something different. Either way, it’s still worth keeping an eye out for the following:

How to prevent Man in the Browser attacks?

I’m afraid there isn’t much we can do to protect against MitB attacks. But that doesn’t mean you can’t do anything about it. It’s just that what you can do is relatively benign.

Here’s a shortlist of what organizations and individuals can do to mitigate MitB attacks.

To minimize opportunities for MitB attacks, organizations should implement strict user account permissions to prevent privilege escalation. This will limit the damage if a MitB attack is successful.

Organizations should provide basic online security training to their staff, covering topics like social engineering and how to detect a compromised computer, among other things.

Many MitB Trojans reside in the same location on your computer. Check the following directories for any unknown applications. If you find anything unfamiliar, look it up on the internet and scan it with antivirus software.

The locations you should check are:

You should close your browser when you’re done using it. Because the MitB attack is contained in your web browser, closing the browser interrupts the attack. It may be crude, but it works – even if its usefulness is limited.

As you can see, the above measures are very much limited in scope. Your best bet is to avoid Trojans in the first place. I’d recommend reading our dedicated article on Trojan Horse malware for more information. But here are the main takeaways from that article on how to avoid Trojans.

While nothing is 100%, these common-sense tips should help.

So that’s the lowdown on Man in the Browser attacks. They’re difficult to detect and to defend against. Your best bet is vigilance and a healthy degree of suspicion when online. That can be hard to do when you’re a trustworthy person. But on the internet, suspicion is warranted. You can at least trust that.