It’s a common myth that owners of Apple Mac computers don’t have to worry about protecting their devices from viruses, but how true is this today?
Lee Munson 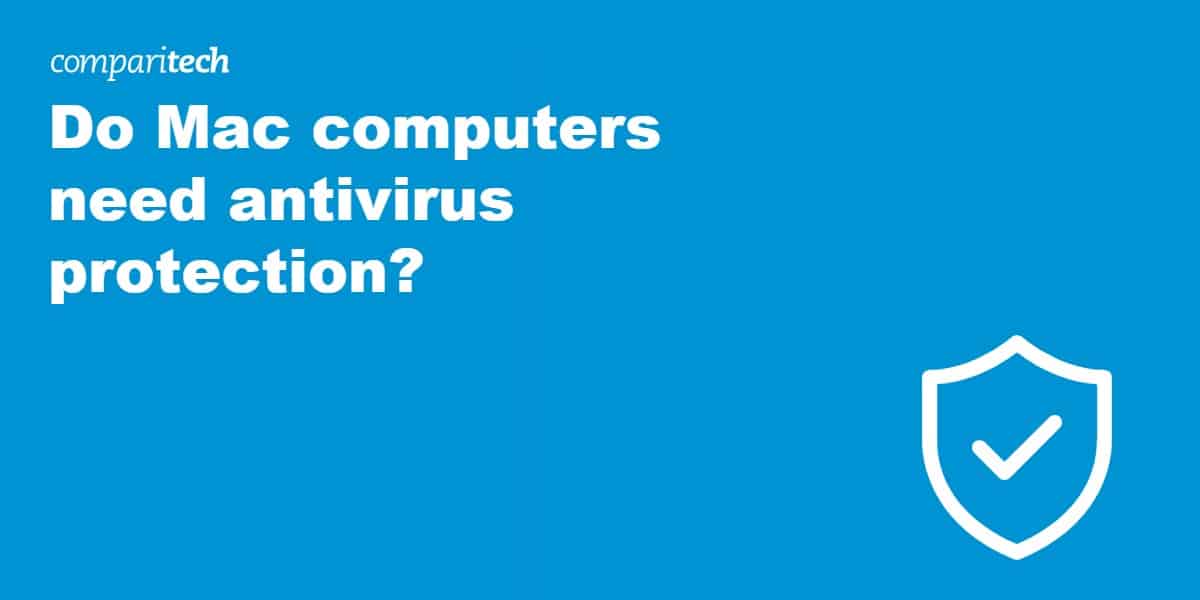 If you think using an Apple computer protects you from viruses and malware, it’s time to think again. Apple dropped the “we don’t get viruses” marketing line back in 2012 – an admission on the company’s part that, yes, Mac computers get viruses.

It’s true that Mac computers are more secure in some ways than Windows systems and benefit from a lower market share, making them less valuable targets for hackers. MacBooks, iMacs, Mac Pros, and Mac Minis are all still vulnerable to many viruses and other malware, and it’s a rapidly growing problem. A study in 2021 found that the number of malicious programs targeting Mac computers increased by over 1,000 percent in 2020! Hackers are clearly shifting their sights onto Mac computers, so users beware.

Mac users often forgo the use of antivirus software, deeming it unnecessary. This obviously makes them vulnerable to malware and may render them more attractive targets for cybercriminals. Apple’s built-in security system does a reasonable job of keeping malware at bay, but you should still beef up your protection by installing antivirus software.

In this post, we discuss why you need to consider using an antivirus with a Mac computer and reveal some of the best antivirus software to help.

Do I need antivirus protection for a Mac?

In short, yes, you do need antivirus for your Mac. Mac computers are not immune to viruses, and other malware and Mac-targeted attacks are increasingly prevalent. Following best practices for securing your device and using built-in security features can help, but antivirus software can protect your device even further.

If you decide you’d like to install antivirus software, there are plenty of options out there, both free and paid. We’ve rounded up some of the best in separate posts, but here are our top seven free and paid options. We recommend opting for a paid antivirus if you can; they are relatively inexpensive and offer significantly better protection than free alternatives. Plus, they are faster and lighter on system resources.

Here’s our list of the best antivirus software for Mac:

Intego Mac Internet Security X9: Currently reduced from $84.99 to $39.99 for a year, this is a wallet-friendly solution. The software was built specifically for Macs. It’s not based on a Windows model, as is the case for many alternatives. It offers a location-based firewall and protection against phishing scams, among other features.

Norton 360 Deluxe: Norton is one of the best-known options on the market. Its 360 Deluxe AV tool comes with a heavy first-year discount and is currently priced at $49.99 (down from $104.99). It can be used on five devices and offers PC cloud backup, parental controls, and VPN coverage.

Norton 360 Standard
GET 52% off the first year!
Get Deal >
Discount applied automatically

Kaspersky Internet Security for Mac: Kaspersky consistently scores well in independent tests and has an accessible price point of $23.99 for a year of protection (reduced from $79.99). Highlights include a content filter for parental control and webcam spying protection.

Bitdefender Antivirus for Mac: This is another inexpensive option (the price has recently been slashed to $24.99 for one year) with a range of features. Some that stand out are a built-in Virtual Private Network (VPN) and an autopilot feature for a set-it-and-forget-it approach.

For more options, see What is the best antivirus for Mac in 2021?

How we pick the top antiviruses for Macs

Now that we’ve concluded the importance of using antivirus software on Macs let’s get into how we select the best providers for the task at hand. Check out our selection criteria below for more details:

Want to learn more about how we select antivirus products? Take a look at our antivirus testing methodology guide.

The first question to ask is, “Does malware exist on the macOS platform?”

The answer to that is yes, it does. While Macs have largely flown under the radar of cybercriminals in the past, that’s no longer true. In 2020 alone, 674,273 new Mac malware samples were discovered.

Yes, figures do suggest that Mac computers are less likely than Windows PCs to come under threat from malware. But just because the risk is lower doesn’t mean there’s no risk at all. Plus, the risk is amplified if you’re a business that runs multiple Mac computers.

Even if you’re just using a Mac as a home computer, there are some good reasons to consider improving security:

The macOS operating system comes with built-in malware detection, which we’ll discuss in more detail below. This built-in detection feature is a nice-to-have, but with an increasing number of threats, there’s a higher likelihood that new malware could find its way onto your system before Apple updates its databases. These are referred to as zero-day threats, and are reason enough to consider installing some security software.

Note that even an antivirus can’t protect you against many attacks. For example, if someone tricks you into installing malware, it’s already too late for an antivirus to save you. Human error doesn’t distinguish between operating systems and Mac users can fall prey to scams just as easily as PC users can.

Mac software is based on Unix, which comes with its own security features. This is one reason Mac has remained relatively secure. Mac also provides built-in security measures to help combat malware, including:

Apple continues to patch security vulnerabilities with each subsequent update. It’s crucial that you install updates as soon as possible to keep your system secure. Macs provide automatic security updates, but you need to make sure they’re enabled. To check, simply follow these steps:

As with most things in life, there’s usually a catch when a product is free. Security is not an area we recommend you cut corners on but if you really don’t want a paid solution, here are two free options.

1. Intego Mac Security X9: Intego is a solid option for Mac users for one simple reason: It was built from the ground up for Mac. In fact, Intego doesn’t make a Windows version of its app. It’s exclusively for Mac and offers real-time monitoring, automatic scans, file quarantines, firewall protection, and more.

2. Comodo Free Antivirus for Mac: Although the brand doesn’t have the same punch as others on this list, Comodo offers a fairly broad range of features for customers of its free service. These include real-time malware protection, scheduled virus scanning, quarantines, suspicious file removal, drag-and-drop and one-click scanning, and more.

Other tips for securing your Mac computer

While built-in and additional antivirus software can help, there are other things you can do to secure your computer. Beyond the unlikely event of a virus taking hold of your Mac, the most likely threats you’ll face are adware and spyware. The best way to avoid those and other threats is by taking basic but effective security steps:

Many attacks on web browsers are enabled by JavaScript, and disabling JavaScript used to be good security advice. However, because of the amount of websites that will have their functionality affected on the modern web, this isn’t something we recommend for most people, despite the security benefit. You might opt for a browser extension instead that allows you to allow or deny JavaScript on a site-by-site basis instead. If you wish to disable JavaScript, uncheck Enable JavaScript in Safari > Preferences > Security.

If you practice all the above, you shouldn’t have to worry about threats disrupting your enjoyment of your Mac. Of course, things do change, so keep abreast of the latest security news just in case.

Related: Want to do even more to improve your security and privacy? Check out our roundup of the Best VPNs for Mac.

How do I run a Mac virus scan?

Running a virus scan is usually straightforward but will depend on which antivirus software you have installed. Here are the basic steps:

If you forgo using antivirus software and instead choose to rely on Mac’s built-in virus scanner, you don’t need to run a scan. XProtect works in the background to automatically detect and block known malware.

How do I know if my Mac has a virus?

Aside from running a scan, there may be tell-tale signs that something is awry with your system. Ransomware, for example, is usually obvious as some or all files and folders will be encrypted (and inaccessible), and you will usually see a popup demanding a ransom payment. Other signs include ad popups, unexpected slowdowns, browser redirection, and applications you don’t recognize.

Ultimately though, running a scan using antivirus software will tell you if your system is infected and with what.

Does Mac have built-in antivirus?

Yes, Mac does have built-in antivirus. MacOS includes XProtect, an antivirus technology that is automatically updated with known threats, separately from operating system updates. It runs a check for known malicious content when an app is first launched or has been changed. If it detects known malware, XProtect blocks its execution.

While this built-in antivirus offers some protection, it does not provide the same level of service you get from a paid antivirus software.

Do all Macs have the same level of protection?

This is an interesting question. On the face of it, all Macs have the same operating system and will therefore be vulnerable to the same types of attack. However, newer Macs now contain Apple's first custom-built processor - the M1 chip. Vulnerabilities can exist in both hardware and software and so it's likely that over the coming years we will see threats specific to the old Intel architecture or the Apple architecture. Only time will tell.

Can I trust free antivirus for my Mac?

How often should I scan my Mac for viruses?

It is a good idea to scan your Mac for viruses every week. You can use the built-in Apple malware protection system or choose a third-party option. Whichever option you choose, keep your software up to date to ensure the best protection.

What can I do to prevent my mac from getting infected with a virus?

There are a few things that you can do in order to help protect your Mac from getting infected with a virus. First, you should keep your Mac up-to-date with the latest software updates. Apple releases security updates on a regular basis, and these can help patch vulnerabilities that might be exploited by viruses.

Installing a Mac antivirus is also beneficial. There are a number of different options available, and it’s important to choose one that will provide you with the best protection. You'll find some free antivirus programs, while others require a subscription.

In addition to installing antivirus software, you should also be sure to practice good computer hygiene. This includes avoiding downloads from untrustworthy websites, not clicking on links in emails from unknown senders, and being careful about what you install on your computer.

By following these simple tips, you can help protect your Mac from getting infected with a virus. However, even if you do everything right, there’s no guarantee that your computer will never get infected. So, it’s always a good idea to have a backup plan in place in case your computer does become infected.

Is it possible to get a virus on my mac even if I don't download anything from the internet?

Yes, it's possible to get a virus on your mac even if you don't download anything from the internet. There are many ways that viruses can spread, including through email attachments, infected websites, and malicious software disguised as legitimate programs.