The 6 Best Turbo VPN Alternatives in 2022

Turbo VPN has taken the freemium VPN space by storm with its unlimited data cap and excellent server speeds. But some users are looking for alternatives due to the uncertainty around its privacy practices.
Craig McCart 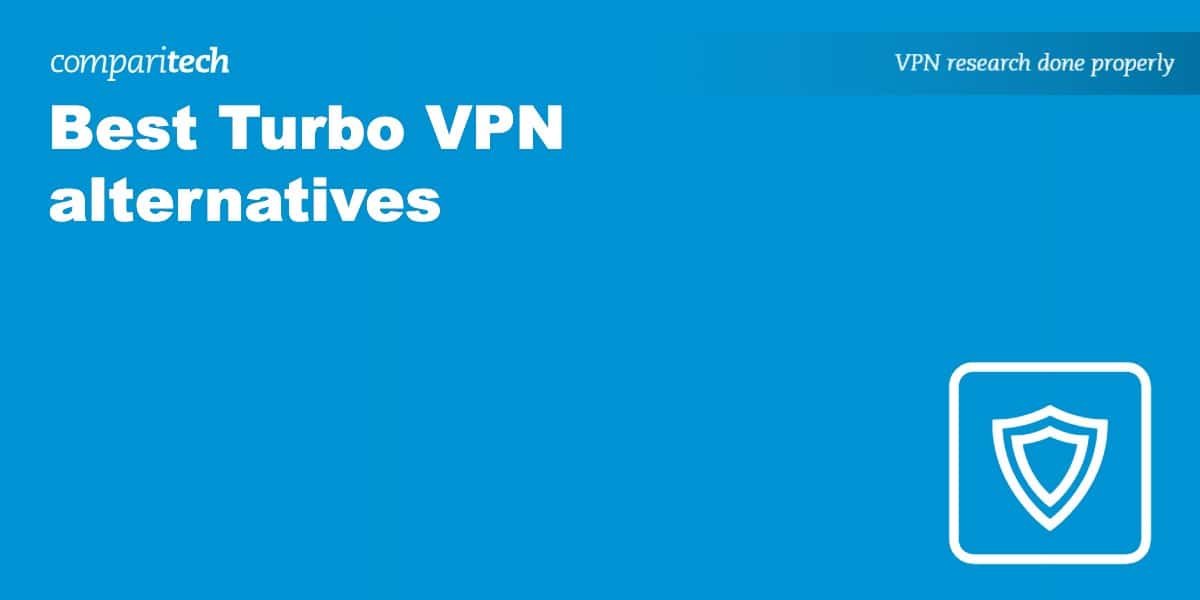 If you’re among the users looking for a Turbo VPN alternative, you’ve come to the right place. Turbo VPN is a freemium provider, which means it has both free and premium VPN plans to choose from, with noticeable limitations on the free version.

Turbo VPN is losing many VPN users to providers with more robust and trustworthy privacy practices. Turbo has links to China, even though the company is headquartered in Singapore. A report by Security Affairs detailed ten VPN companies that a Chinese organization secretly owns, and Turbo VPN is on that list.

Fortunately, with so much choice available with some of the most reputable VPNs out there, there’s no need to settle for the privacy practices employed by Turbo VPN. In this guide, you’ll find our top recommended premium VPNs, along with some freemium VPNs that have built a solid reputation in the VPN space.

In a rush to find a Turbo VPN alternative? Check out our top picks here:

Having trouble deciding which Turbo VPN alternative is the best fit for your needs? Our top choice provider NordVPN has a 30-day money-back guarantee, allowing you to try all the VPN features for 30 days, and if you aren't 100% satisfied, you can cancel and get a full refund.

Our criteria for selecting the best Turbo VPN alternatives are as follows:

If you would like to know more about our analysis process then take a look at our VPN testing methodology page.

Ready to find out which are the best Turbo VPN alternatives? Check out our mini reviews below.

NordVPN is the best alternative to Turbo VPN for its zero-logging policy, which is backed by a decade-long reputation as a trusted VPN provider. NordVPN is based in Panama, which is outside of the Five, Nine, and Fourteen Eyes Alliances, which means even if it did log user-identifiable information, they’d be under no obligation to hand over logs to local authorities if approached.

If lightning-fast speeds are what you’re looking for, NordVPN hits all the right notes. NordVPN outperforms Turbo VPN’s speeds thanks to its vast server network of 5200+ servers in 60+ countries worldwide, meaning you’ll never struggle to find a server nearby to produce the best possible speeds. Its use of the WireGuard protocol further enhances speeds in supported locations, using state-of-the-art cryptography to protect your privacy.

Unlike Turbo VPN, which struggles with the likes of Netflix and Disney Plus, NordVPN lets you watch dozens of international Netflix catalogs and other major streaming services without any hassle. Lastly, NordVPN includes a plethora of extra privacy options like a built-in adblocker and malware blocker as part of its CyberSec feature to further enhance your online privacy.

BEST TURBO VPN ALTERNATIVE:NordVPN is our top choice. It has a strict zero-logging policy, speeds are excellent, and it includes a risk-free 30-day money-back guarantee.

Surfshark is the best budget alternative to Turbo VPN, smashing its five simultaneous device limit with unlimited simultaneous connections. This is useful for protecting the devices around your home with a VPN, including your desktop, Mac, smartphone, TV, and games consoles. You could also share the account with friends to split the subscription fee without impacting your connection.

Surfshark is another reputable provider that collects very minimal logs for diagnostic purposes, which cannot be used to identify individuals. Aside from using AES 256-bit encryption to protect your online activities, Surfshark includes two obfuscation features it calls NoBorders and Camouflage Mode. These obfuscation features are useful for beating heavy internet censorship, and unlike Turbo VPN, this allows Surfshark to function in China (as long as you install it before you arrive in China).

Surfshark has 3200+ servers in 65+ countries, so you can expect excellent speeds no matter where you are connecting from. This far outweighs the 21 countries that are available with Turbo VPN, which is known for unstable connections when there’s not a server nearby.

GREAT BUDGET OPTION:Surfshark offers strong encryption for ultimate online privacy that doesn’t compromise speed. It also has great unblocking capabilities and lets you connect an infinite number of devices at once. A 30-day money-back guarantee is included with all plans.

Our extensive Surfshark review is here.

ExpressVPN is among the fastest Turbo VPN alternatives that we’ve tested. 4K streaming on Netflix or BBC iPlayer is made possible thanks to reliable connectivity and servers in 94+ countries that ensure buffering is a thing of the past. ExpressVPN is also renowned for providing the smoothest online game sessions around. Don’t settle for laggy online games experienced with Turbo VPN.

ExpressVPN is known for its bulletproof no logs privacy policy, and the fact that it’s based in the British Virgin Islands means it is out of the jurisdiction of the Five Eyes Alliance that other regions like the UK are subject to. As a result, local authorities that approach the provider for connection or activity logs on its users have no right to do so, and ExpressVPN has no obligation to comply.

ExpressVPN comes with advanced features like IPv6 leak protection to ensure your online activities remain watertight, and if you need a VPN to watch US Netflix, it handles geo-blocks effortlessly.

LARGEST SERVER COVERAGE:ExpressVPN has the most extensive server coverage of all the VPNs on this list with 3000+ servers in 94 locations. It has a reputable privacy policy and advanced privacy options that add an extra layer of protection to your online activities. ExpressVPN includes a 30-day money-back guarantee.

The ExpressVPN review is available here.

CyberGhost is is an excellent Turbo VPN alternative that produced the best speeds of all the VPNs we tested. CyberGhostputs your online privacy at the forefront with its transparent privacy policy, operating its headquarters in Romania. Romania is another country that sits outside of the 5, 9, and 14 Eye Alliances, so foreign government officials have no jurisdiction to demand CyberGhost provide logs on its users.

CyberGhost has over 8000+ servers in 88+ countries across the globe. It is an excellent choice for beginners as it offers servers optimized for specific online activities. For example, if you’re thinking about watching BBC iPlayer, there’s a server specifically for that. Are you considering some torrenting? There’s a server for that too.

CyberGhost uses AES 256-bit encryption, the same standard used by the military, and is virtually uncrackable, so you know your privacy is in good hands. Speeds are excellent across server locations, and unblocking regional Netflix libraries is a breeze.

BEST OPTION FOR BEGINNERS:CyberGhost makes using a VPN easier than ever. Apps are available on all major platforms. It uses AES 256-bit encryption and offers a 45-day money-back guarantee.

ProtonVPN is our top freemium Turbo VPN alternative. By freemium, we mean both free and premium subscription models are available (similar to Turbo VPN).

The free plan is limited to around 24 servers in 3 countries. You can use the VPN on a single device, you’ll get an unlimited data cap, but speeds are limited. On that basis, we’d recommend upgrading to the premium version of ProtonVPN to get the best set of features available.

ProtonVPN’s basic subscription gives you access to 4000 servers in over 40 countries and includes 2 simultaneous device connections. As a result of the broader server coverage, you’ll have no trouble finding a server near your physical location. ProtonVPN lets you watch a handful of international Netflix catalogs without any issues.

ProtonVPN operates a strict no-logs policy, and with the support for P2P, you can be sure your activities are never monitored. It also includes a built-in adblocker to add another layer of privacy to your connection.

Check out the full ProtonVPN review.

Atlas VPN is another freemium VPN that includes unlimited bandwidth across all plans. Atlas VPN soars past Turbo VPN’s small simultaneous device limit with unlimited device connections to secure all of your devices with a VPN.

We’d recommend Atlas VPN’s premium plan instead of its free download option as it limits free users to around 3 server locations. The premium plan gives you access to 750+ servers that are optimized for 4K streaming, torrenting or internet browsing. While bandwidth isn’t limited on its free plan, speeds may be noticeably slower.

Atlas VPN premium doesn’t include annoying in-app advertisements, and it also includes a built-in ad blocker, blocks access to suspicious websites, and can check whether your personal information has been exposed online.

If streaming Disney Plus or Netflix is your thing, Atlas VPN is up to the challenge of streaming most platforms without running into annoying proxy errors.

UNLIMITED DEVICE FREEMIUM CHOICE:Atlas VPN includes unlimited bandwidth, an infinite number of simultaneous devices connections, and lets you stream most of the big streaming platforms. A 30-day money-back guarantee is included with all premium subscriptions.

Generally, freemium VPNs don't offer port forwarding. Port forwarding is a useful feature for gamers or torrenting, allowing you to receive unsolicited requests from other users. Providers like NordVPN use port forwarding, but we’d recommend only using it where necessary as it could produce a significant security vulnerability.

How good is Turbo VPN?

We wouldn't recommend either Turbo VPN's free or premium plans to anyone, mainly due to its privacy practices. Aside from its logging policy, Turbo VPN has many servers (21,000), but its server locations are limited to just 21 countries, even for its paid users.

Does Turbo VPN have a Chrome extension?