Does your business need a site-to-site VPN?

Businesses can use site-to-site VPNs to collaborate on work and share resources between offices. We discuss how site-to-site VPNs work plus reveal our top recommendations, and the alternatives.
Paul Bischoff TECH WRITER, PRIVACY ADVOCATE AND VPN EXPERT 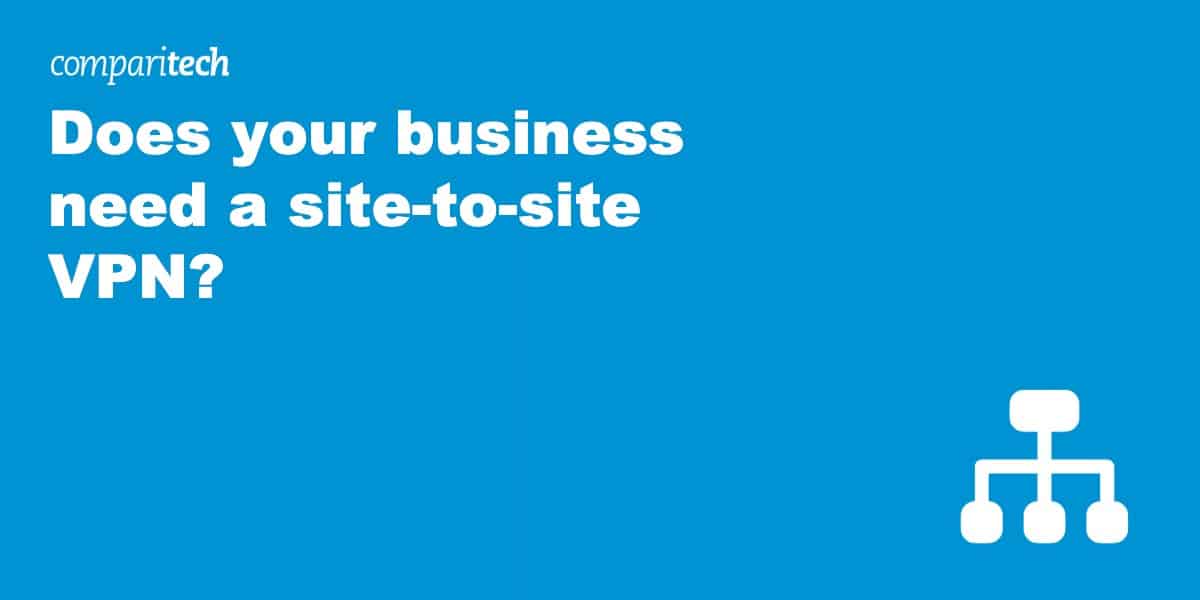 A VPN, or Virtual Private Network, allows you to securely access remote resources over the internet from a remote location. A common example is an employee working from home who uses a VPN to securely access company-only apps and documents from their employer’s office. A site-to-site VPN works similarly, except instead of connecting an end-user device to a company network, it connects two entire networks.

If you’re just looking for a quick recommendation, here’s a summary of our favorite site-to-site VPN services:

Site-to-site VPNs can be used to securely connect the local networks of two or more offices in different locations. This allows employees in both locations to securely share resources and collaborate without exposing communication and files when they’re sent over the internet.

A site-to-site VPN can also connect a group of offices in different places to a central data center.

Unlike remote access VPNs installed on end user devices, which should be disconnected when not in use, site-to-site VPN connections usually remain in place indefinitely.

If you’re looking for a tested, ready-to-deploy site-to-site VPN service, we’ve listed some of the best services based on the following criteria:

Perimeter 81 specializes in VPNs for businesses. You can easily deploy private VPN servers and manage network activity from an online dashboard. It doesn’t require much technical expertise and allows businesses to set up either site-to-site or cloud VPN servers. Further, you can easily scale your network up as your business grows. Public servers are also available in 36 locations around the world.

BEST SITE-TO-SITE VPN:Perimeter 81 is our top choice. Easily deploy site-to-site VPN servers and customize them to your needs. Comes with a 30-day risk-free guarantee.

NordVPN Teams caters to small and medium-sized businesses. With it, you can build dedicated gateways that enable secure access to your company’s local network. Users can be managed from a centralized dashboard. Scaling up and adding more users is easy.

BUDGET PICK:NordVPN Teams is a great value and simple product for SMBs. It comes with a 30-day money-back guarantee.

Twingate is technically a ZTNA, or zero-trust network access solution, and not a VPN. We’ll discuss more about ZTNAs below, but for now, suffice to say that they are arguably more secure and easier to deploy. Twingate can be deployed without changing your network’s infrastructure and it can be scaled up without any restrictions.

Twingate supports single sign on (SSO). The zero-trust model allows IT admins to restrict access to apps and resources on the network with a level of granularity not usually possible with VPNs. You can also split tunnel traffic so that it only sucks up local network resources if necessary. More bandwidth-intensive activities can use a direct connection.

Twingate doesn’t use apps like a normal VPN. Instead, authorization happens on a per-app basis any time you access the network.

ZERO TRUST:Twingate is a ZTNA that allows businesses to manage remote access to apps and other resources. It comes with a 30-day money-back guarantee.

How does a site-to-site VPN work? 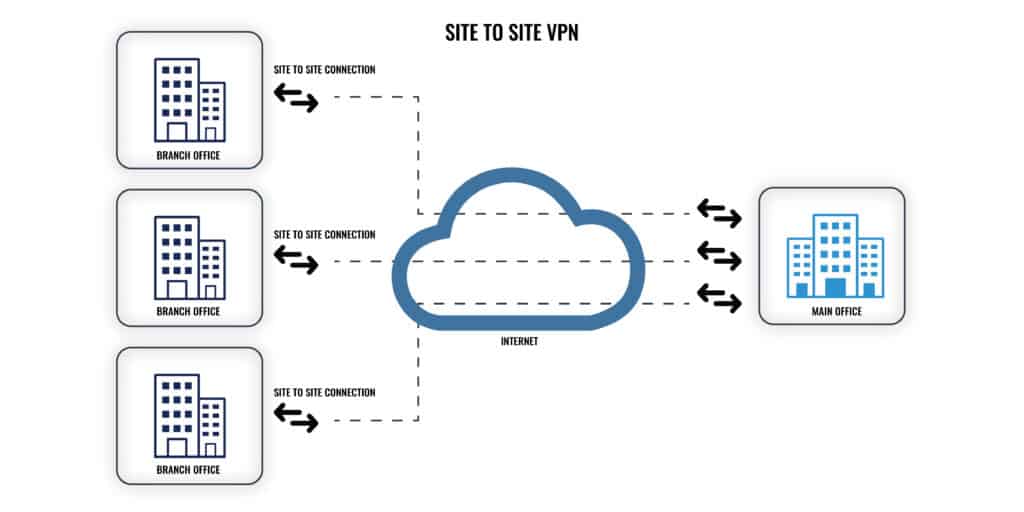 Each “site” must have a VPN gateway connected to the internet, such as a router, firewall, or security appliance. Data sent from one site is first encrypted by the gateway before being sent over the public internet. When that data arrives at the other site, the receiving gateway decrypts the data and forwards it to the intended recipients.

If anyone intercepts data being transmitted between the two sites, it will be encrypted and thus unusable. That’s why we sometimes refer to VPNs as “encrypted tunnels”.

What are site-to-site VPNs used for?

Site-to-site VPNs are used to securely connect the local networks of two or more geographically dispersed offices, allowing employees to safely collaborate and share files. Here are a few examples:

Advantages: Why use a site-to-site VPN?

Here are a few key advantages to using a site-to-site VPN:

Disadvantages: Why NOT use a site-to-site VPN?

Here are a few key disadvantages of site-to-site VPNs:

How much does a site-to-site VPN cost?

The price of operating a site-to-site VPN can vary quite a bit depending on a few factors:

Site-to-site VPNs have fallen out of vogue in the past few years, largely thanks to widespread adoption of the cloud for hosting files and applications. Most businesses no longer host their own on-premises servers, which has made site-to-site VPNs less useful.

If you decide that a site-to-site VPN isn’t right for you, here are some alternative technologies:

Site-to-site VPNs and MPLS VPNs are often used interchangeably, but there is a slight difference. Site-to-site VPNs usually send encrypted data across the public internet. That means it’s vulnerable to all the downsides of the internet, like congestion and snoopers.

On the downside, MPLS is more expensive and does require some specific equipment to set up.

VPNs assume that anyone who is authorized to access the network can be trusted. There are very few restrictions once the user has connected. ZTNA, or zero-trust network access, takes the opposite approach. No device or user is trusted until they’re properly authenticated.

ZTNA solutions work on the application layer and, unlike VPNs, are independent of the network. Instead, users are connected directly to applications based on user verification and device posture. Applications are hidden from the internet, which reduces attack surface.

Compared to a VPN, SD-WAN offers lower latency and has some security failovers that VPNs do not.

Most experts agree that SD-WAN requires less maintenance and expertise than a VPN, and is easier to scale up. These characteristics also mean that SD-WAN is better for work-from-home employees. Connections can be made over LTE, 4G, and MPLS, among others.

By default, SD-WAN doesn’t come with any security or access control, which means enterprises in the past needed to set up their own, unwieldy network of gateways and firewalls. Enter SASE.

SASE, or Secure Access Service Edge, is a model for implementing SD-WAN that gives enterprises a single, centralized view of the entire network, allowing for easy management. If you decide to go with an SD-WAN network, be sure to secure it with a SASE solution.

A private circuit, or leased line, is a private, permanent, and dedicated connection between two or more locations. This solution is expensive and is usually only necessary for very large enterprises. Enterprises must pay recurring lease fees based on the number of locations and necessary bandwidth. They cannot carry any third-party communications, which means leased circuits are free from the congestion and latency of the internet.