Who’s Being Targeted? An In-Depth Analysis of Political Advertising on Facebook

Via the Facebook Ad Library, Facebook now makes ad data and archives for thousands of advertisers accessible to anyone in an effort to increase transparency

We examined public data from the Facebook Ad Library, for the period March 2018 to May 2019, to determine the biggest political and social issue advertisers and to better understand which audiences they are reaching on Facebook.

This is an unprecedented dive into political advertising on the world’s largest social media platform.

We’ve identified the top political advertisers on Facebook between March 2018 and May 2019, as classified by Facebook. This includes advertisers spending on political causes, elections and social issues such as the environmental advocacy group 4Ocean.

Although Facebook logged nearly $616 million of paid political and social cause advertising, for the purposes of this study, we focused on the $127.2 million in spending by the top political spenders.

In the first three months of 2019, President Donald Trump raised over $30 million. His fundraising resulted in more money than any other democratic candidate, giving him more room to spend on campaigns.

According to the data, President Trump spent $12.5 million on Facebook ads, making him the top political advertiser regardless of affiliation.

Facebook, the only entity to come somewhat close to Trump’s spending, dedicated nearly $11 million on ads. The spend for Facebook and Instagram ads included in these data were characterized by Facebook as, “ads related to our election integrity efforts and getting out the vote.” Specifically, the majority of these ads on Facebook and Instagram have been aimed at helping users register to vote or directing them to local polling places, but are still classified under the general rules for inclusion in the ad library since they pertain to elections.

However, liberal political advertisers spent a total of $66.5 million on paid Facebook advertising – almost double the amount spent by conservatives. Of the biggest spenders, the majority of entities were organizations rather than candidates, with the sitting president the only conservative candidate to be included. For Democrats, Beto O’Rourke was the highest-spending candidate with $8.1 million, while Kamala Harris spent $2.5 million and Joe Biden just $1.3 million.

In addition, some organizations not normally considered to have a political leaning saw a subset of their advertising classified as political due to its specific ties to interest group. Stella Artois partnered Water.org for its #PourItForward campaign, launched to coincide with World Water Day and featuring actress Mindy Kaling. Other organizations such as Penzeys Spices took even more partisan stands, openly accusing the Trump Administration of racism. 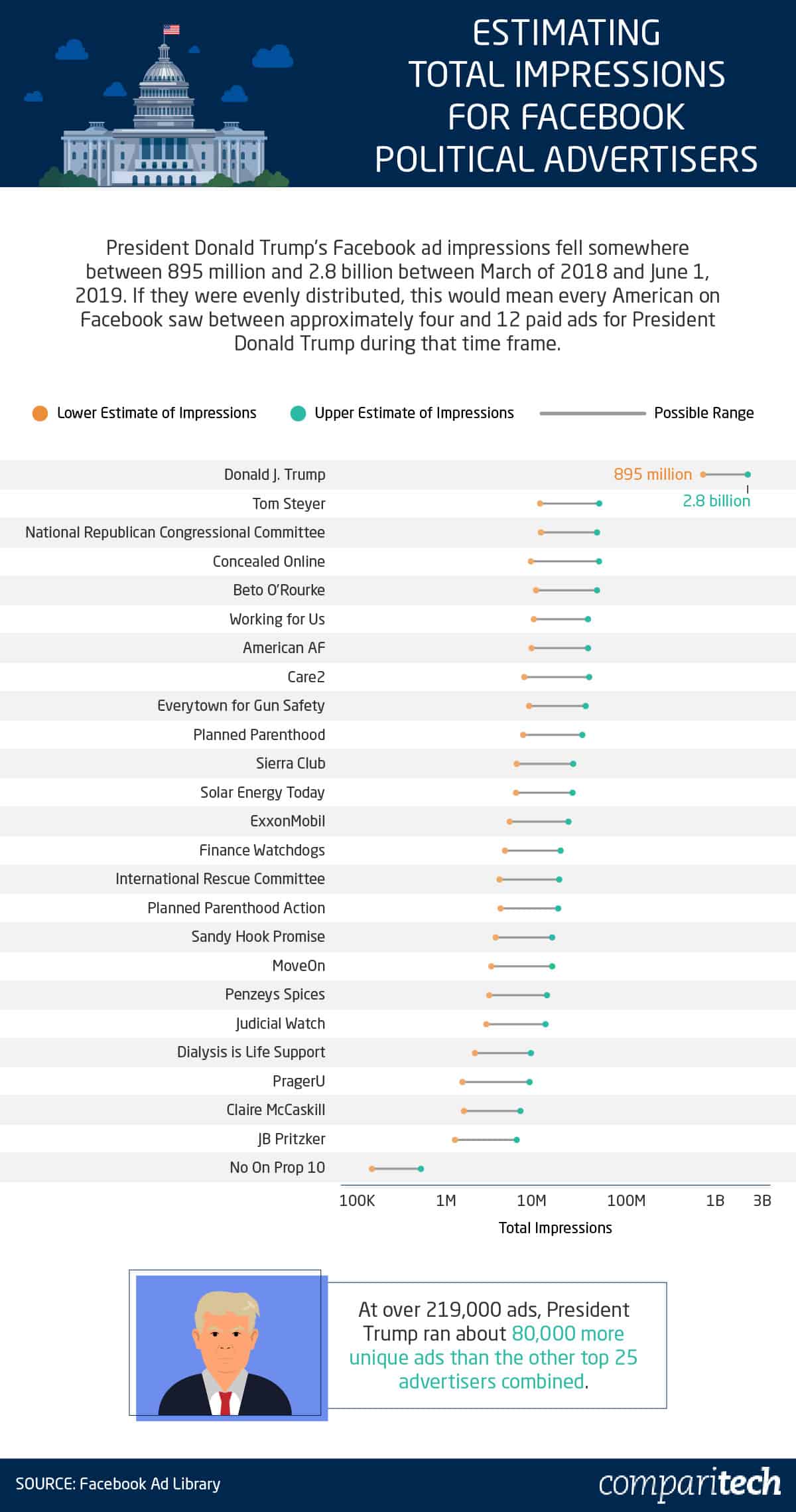 The point of spending so much on Facebook ads is to reach as many people as possible, but while Trump was the highest political spender on the platform, his ad impressions fell somewhere between 895 million and 2.8 billion between March of 2018 and June 1, 2019. Because Facebook reports impressions in broad ranges (e.g., Readers may assume his increased spending resulted in more ad interactions, but considering the lower estimate of his impressions was over 10 times greater than the upper estimate of the next closest political page, impressions may not just be rooted in spending.)

Rather, Facebook’s algorithm rewards ads that gain more attention. As users click, “Like,” or share an ad, Facebook displays it more often. This algorithm works in favor of candidates or organizations that create more engaging ads, as users are more likely to pay attention and react to them. The more engaging the ad, the more impressions – and the cheaper the overall cost.

Seeing that fewer impressions increase the cost of ads, it makes sense why no other candidates or organizations were willing to spend as much as President Trump. Paying more for ads doesn’t necessarily mean more users will engage with them, and entities would be shelling out money without a guaranteed return on investment. 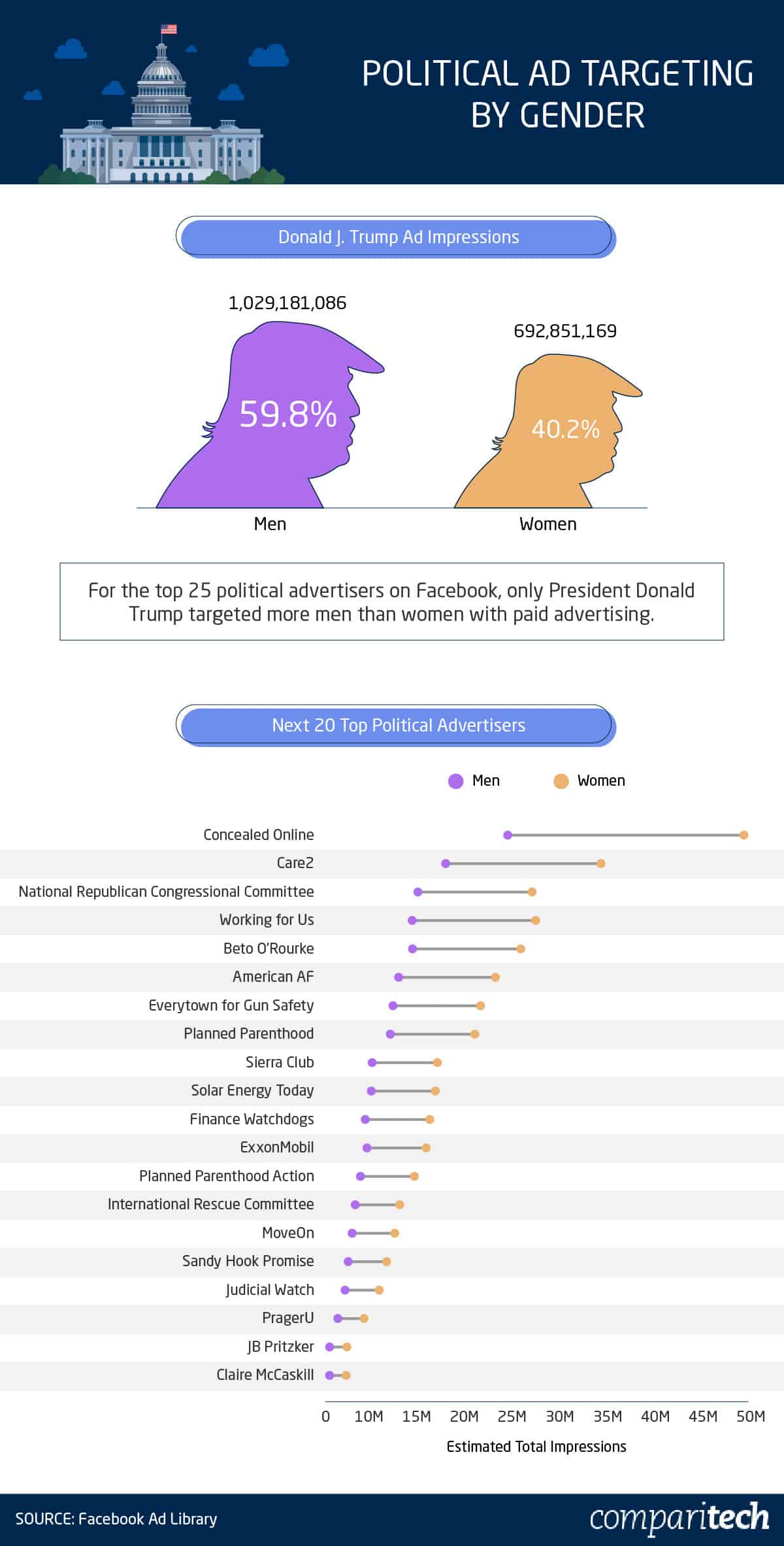 Since more ad spending doesn’t always lead to a larger audience, knowing your audience – and targeting ads accordingly – can help to boost engagement. Looking at ad targeting by gender, President Donald Trump was the only political entity who targeted more men than women. The president’s paid advertising racked in over a billion impressions, with 40.2% from women and nearly 60% from men. Considering 54% of Facebook’s American users are women and 46% are men, it makes sense that the majority of the top advertisers leaned toward a female audience.

Concealed Online, a company offering online safety training courses for concealed carry permits, targeted nearly twice as many women as men, earning 50 million impressions from women compared to just 20 million from men. While gun owners are primarily men, there has been an increase in the number of women applying for concealed carry permits. Care2, an online petition network, also targeted significantly more women than men – the organization had nearly 35 million impressions from women and just over 15 million from men. 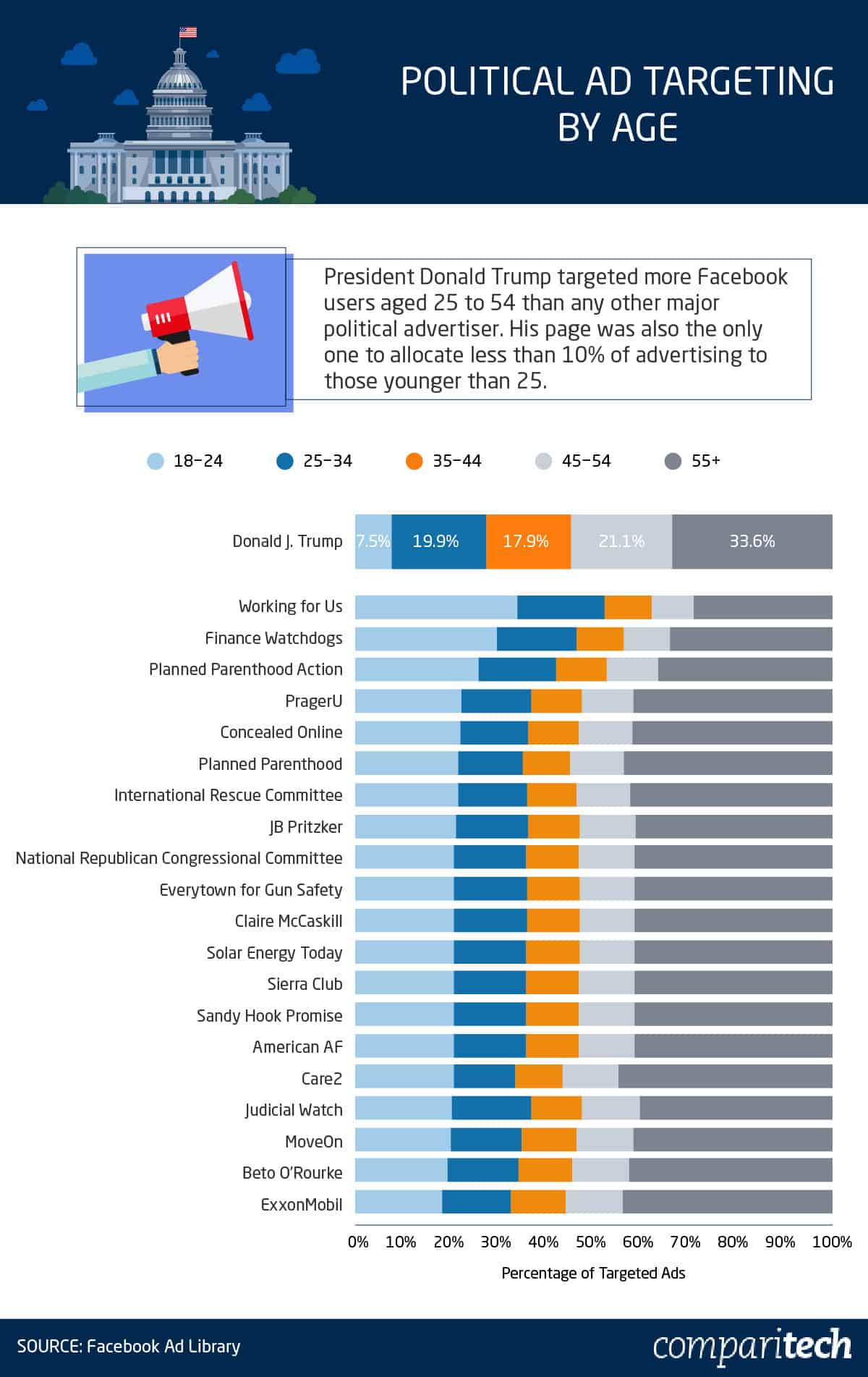 Organizations and candidates go even further with ad targeting, also controlling the age groups that see their ads. With just 7.5% of paid advertisements allocated to those younger than 25, President Donald Trump targeted more Facebook users aged 25 to 54 than any other top political advertiser. During the 2016 presidential election, Trump received the majority of his votes from those over the age of 45, with just 37% of votes coming from 18- to 29-year-olds. Targeting Facebook ads toward his supporters is likely the best move for the sitting president, despite voting demographics changing.

In the 2018 midterm elections, voters aged 18 to 53 outnumbered baby boomers and older generations. This trend is expected to continue into the 2020 presidential election, with millennials and Gen Zers making up an estimated 37% of eligible voters. Despite the shift toward younger voters, the majority of political entities still targeted those aged 55 or older more than any other age group. 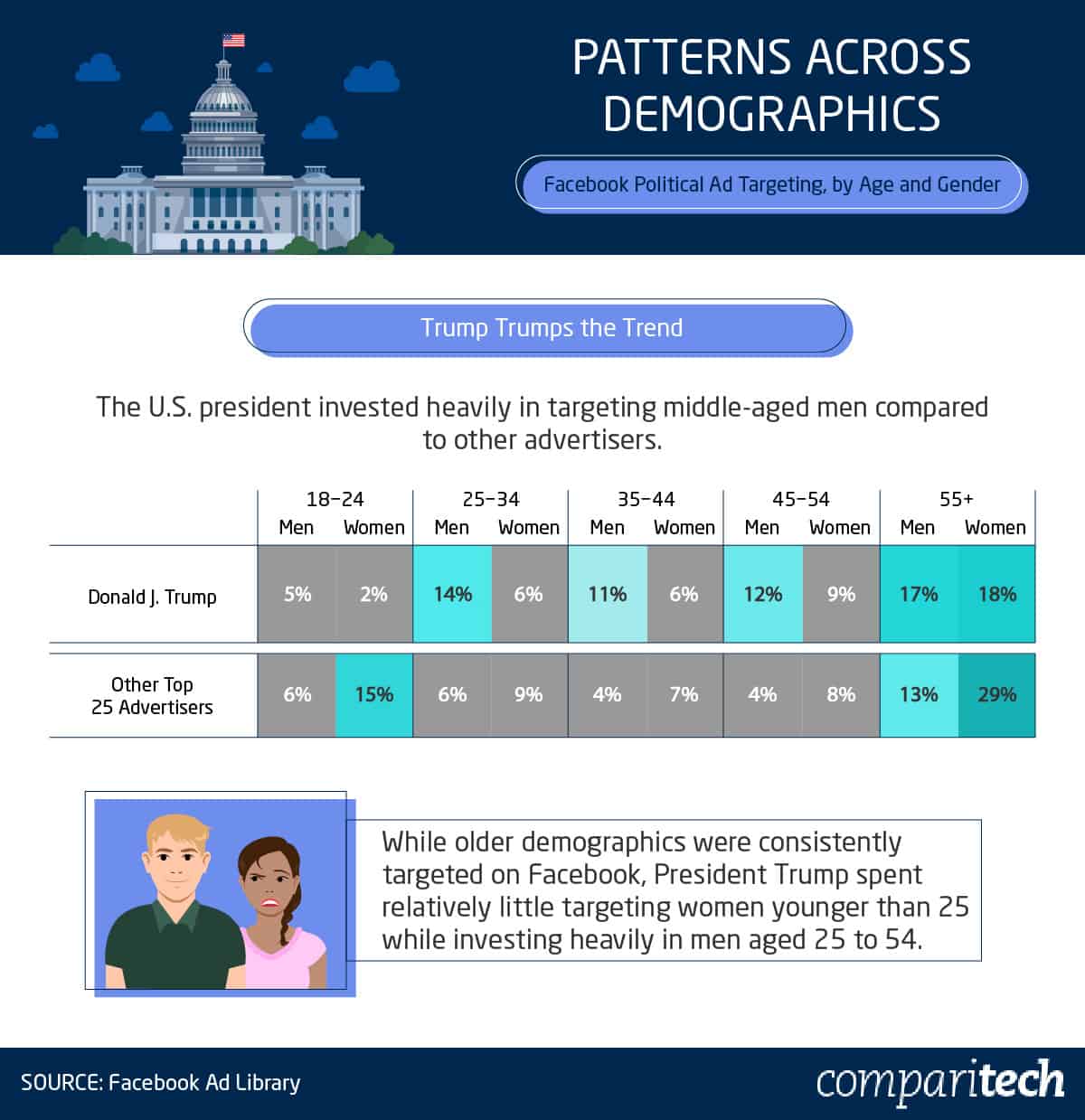 Overall, aside from an almost even split between men and women aged 55 or older, the president invested heavily in targeting more men than women with his Facebook ads. In fact, of the 7.5% of ads allocated to users aged 18 to 24, 5% were targeted toward men compared to just 2% toward women. For every other top political advertiser, the focus was turned toward women, with 15% allocated to women in the youngest age group.

Trump’s 2016 victory was made possible largely due to men, particularly white men, but women also played a significant role. Forty-seven percent of white women reported voting for Trump in the 2016 election, with 39% of all women making the same choice. While it’s clear men were responsible for the majority of his votes, his heavy targeting of men across all ages for the 2020 election may not completely represent the demographics of his supporters. 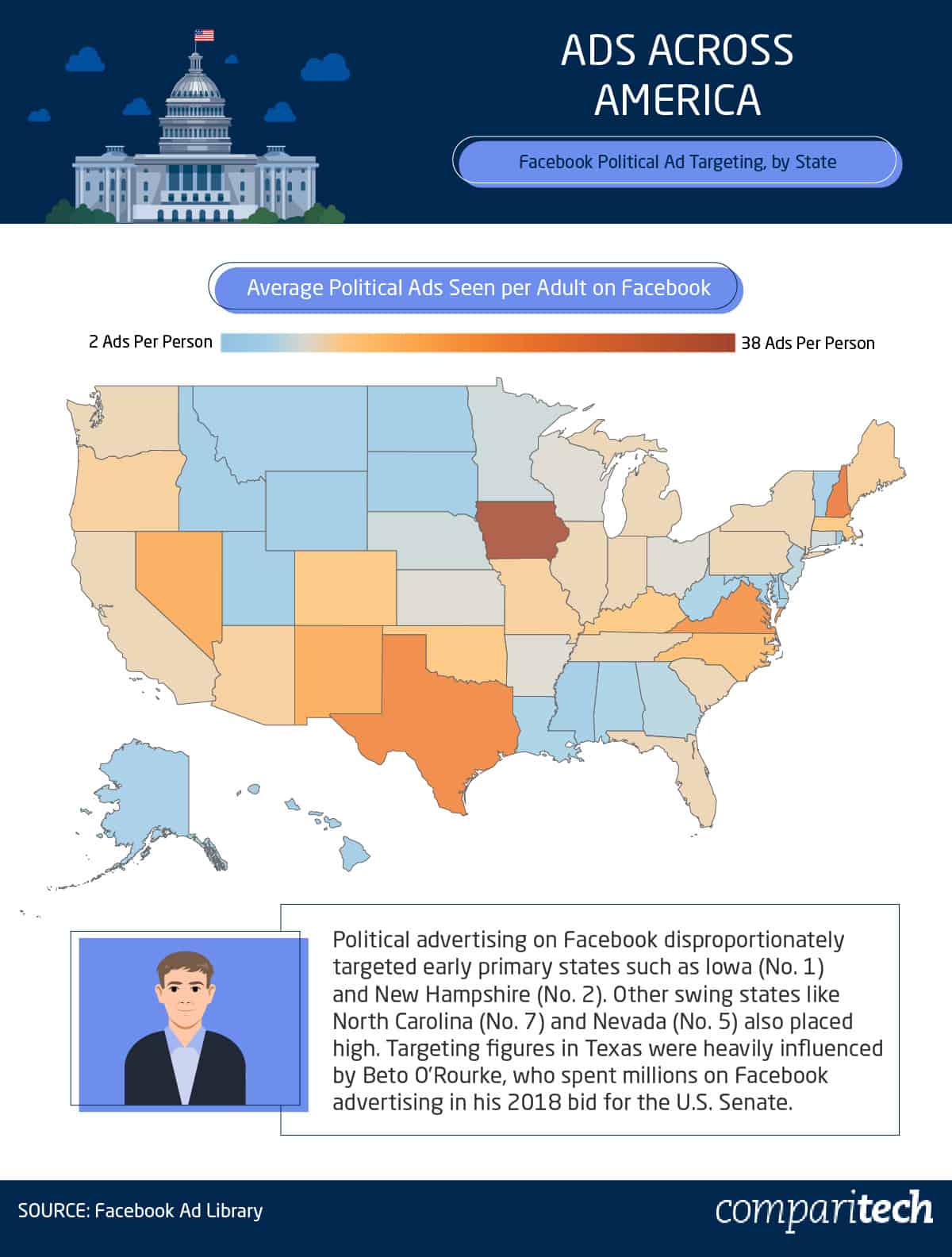 The early primary states of Iowa and New Hampshire took the top two spots for political ad targeting. Other swing states like North Carolina and Nevada were also largely targeted. On the other hand, Texas was heavily influenced by Beto O’Rourke and his 2018 bid for a U.S. Senate seat. But increased targeting in Texas may be a good thing. In fact, it’s projected that Texas will become a battleground state by the time the 2020 election rolls around.

In other cases, states that went solidly red or solidly blue in the 2016 Presidential Election received far less spend per capita from political advertisers. Ultimately, the map drawn from Facebook advertising data is dramatically reflective of the U.S. Electoral College system, whereby a presidential candidate can win office without winning a majority of votes nationally. Although the debate around the method has shifted dramatically in the last few decades, advertising trends make clear that the current system is what drives political advertising on the web and likely will for years to come.

Among the top conservative organizations, Trump was the only entity to target Alabama, Georgia, Ohio, and Louisiana heavily. The majority of his focus, however, was on Florida – the state ranked No. 1 for targeted states by Trump but didn’t make the top 10 for any other conservative cause. Instead, conservatives largely set their targets on Iowa, Texas, and New Mexico.

Conservatives may not be focusing on Florida, but Trump’s heavy targeting of the swing state makes perfect sense. As the most populous swing state, Florida will be the deciding factor in Trump’s reelection in 2020. The president has not only directed the majority of his ads toward Floridians, but he has also spent a significant amount of time there.

Florida’s role in the upcoming election is not only acknowledged by President Trump’s large spend in the state, though. Liberal causes and candidates spent their money on ads targeted toward Iowa, Texas, and New Mexico. Aside from Tom Steyer, Working For Us, and Planned Parenthood, New Hampshire ranked second for targeted ad spending for every other liberal cause. The three organizations neglected Virginia, though, which ranked third for nearly every other liberal cause.

The sitting president is clearly outspending candidates and causes on all sides of the political spectrum. But simply spending more doesn’t paint the whole picture. Trump’s increased spending and ad impressions are targeted toward specific demographics and states. Across all age groups and genders, he allocated the most to middle-aged men. He also shifted focus away from primary swing states and dedicated his time and money to win over voters in Florida.

With ongoing controversy over online advertising and election meddling leading up to the 2020 U.S. Presidential election,  many have called for platforms to increase their interventions to ensure the transparency, security, and fidelity of political ads. It remains to be seen how effective Facebook’s tool or other transparency initiatives will be in informing the public or combating disinformation, but this report should certainly demonstrate that there is now far more availability of granular data than even a few years ago.

This project sourced all statistics from the Facebook Ad Library Report, an online repository of important information related to the purchasing and targeting of political ads on Facebook. The project began in March of 2018 and currently contains information on nearly 150,000 unique advertisers and over 3.7 million unique ads. Pages used for more in-depth analysis were selected from among the top spending pages in the archive. For each page in this report, we scraped between 5% and 8% of the total unique ads and used aggregate figures from Facebook’s full report to estimate the remainder with a margin of error between 2% and 3%.

Interested in sharing our findings on Facebook political ads and how candidates and causes utilize them? The graphics and content of this project are available for noncommercial reuse. Just make sure to link back to this page to give the authors proper credit.