Ofcom’s new measures could save UK consumers from 115m scam calls and £9.6m in fraud losses 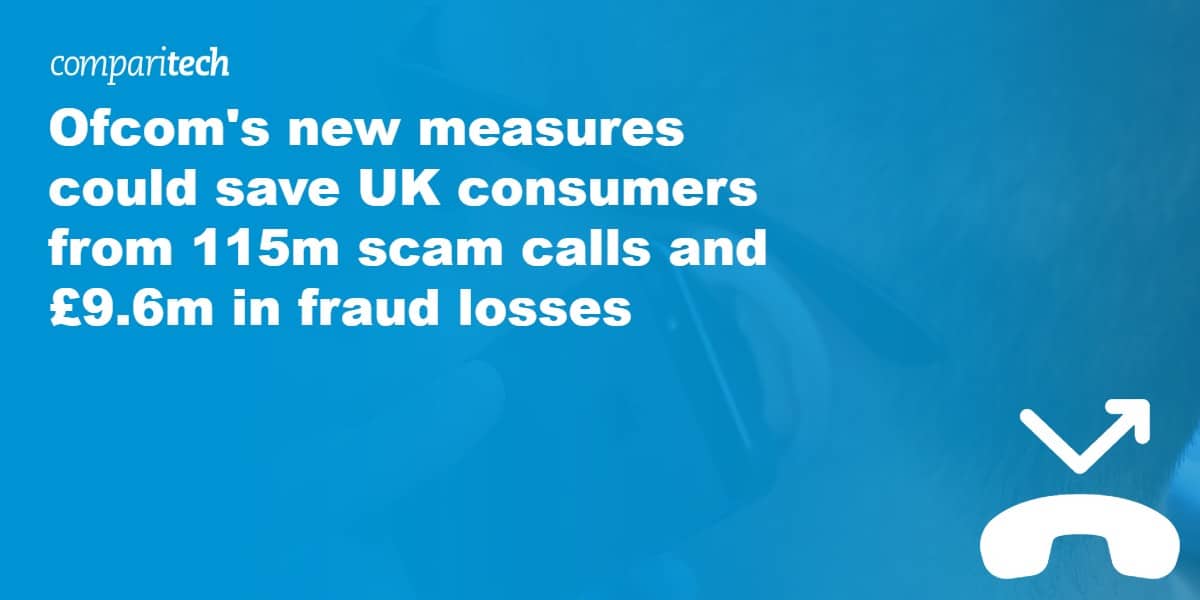 Ofcom confirmed yesterday that major phone networks have agreed to immediately block the vast majority of internet calls from abroad that pretend to be from UK numbers.

While only TalkTalk has implemented the measures so far (other providers are said to be introducing the measures as a “priority”), how many calls might this impact? And what does this mean for UK consumers?

According to our analysis, Ofcom’s new measure could prevent over 115 million scam calls per year and save consumers around £9.6 million.

Ofcom recently revealed that 45 million people were targeted by scam texts or phone calls over the last three months. That equates to around 180 million scam calls or texts per year.

How many of these originate from a foreign number?

Pindrop suggests 64 percent of fraudulent calls come from a country different to the one being targeted. Therefore, around 115.2 million of the UK’s scam calls/texts come from foreign callers. The vast majority of these use internet-based calling technology, Voice Over Internet Protocol (VoIP).

VoIP is the technology that allows us to make phone calls all over the world for free (or at a much cheaper cost than our landline) through the likes of WhatsApp, Skype, and Zoom. But many services allow VoIP calls to connect to traditional phone networks as well, a feature that fraudsters exploit.

Brits lost an estimated £9.6m to phone fraud (from foreign numbers) over the last year

64 percent of these calls came from a foreign country, which equates to 3,247 spam calls from abroad resulting in just over £960,000 in damages per year in the UK.

However, as Which?’s report finds, only 10 percent of the four million incidents of fraud estimated by the Office for National Statistic’s Crime Survey for England and Wales (CSEW) were reported to Action Fraud. This would indicate that over 32,000 spam calls from foreign numbers resulted in losses of £9.6m over the last year.

This may sound astronomical, but it could be a drop in the ocean if Ofcom’s latest survey is anything to go by. Of the estimated 45 million who received scam calls, around 2 percent revealed that they had followed the scammers’ instructions. That’s 900,000 people exposed to scams. At an average cost of £296 per scam, that would amount to losses of £266.4m.

As our recent report on robocalls found, there is no one-size-fits-all approach to tackling spam calls. Rather, a multi-layered approach offers the best defense. This includes these recent regulations from Ofcom, third-party apps that enable call blocking, and initiatives from service providers to combat spam calls. However, implementing effective network-level call screening would require upgrades to old copper-line infrastructure (something the UK is still heavily reliant on)–and that’s an investment that providers won’t make if they don’t have to.

What the above statistics also highlight is that raising consumer awareness is critical. With such a vast number of phone scams going unreported, the problem could be even greater than first imagined. Nearly 80 percent of mobile phone users are also unaware that they can forward scam texts straight away, according to Ofcom. By using the number 7726 (which consequently spells “spam”), users can immediately forward and report a scam text to authorities.

As criminals continue to adapt to the world’s ever-changing technology and grow increasingly sophisticated with their schemes, scam phone calls are here to stay. Always assume that your phone number is publicly available to anyone and if you are being bombarded with spam texts, try switching to a new number. But always ensure you request a new number, not a reused one.