3 Secure alternatives to The Great Suspender

One of Chrome’s most beloved browser extensions has been taken down for allegedly containing malware. Not to worry, though: we’re about to introduce you to three alternatives that work just as well as The Great Suspender.
Ian Garland Streaming, Kodi and VPN Expert 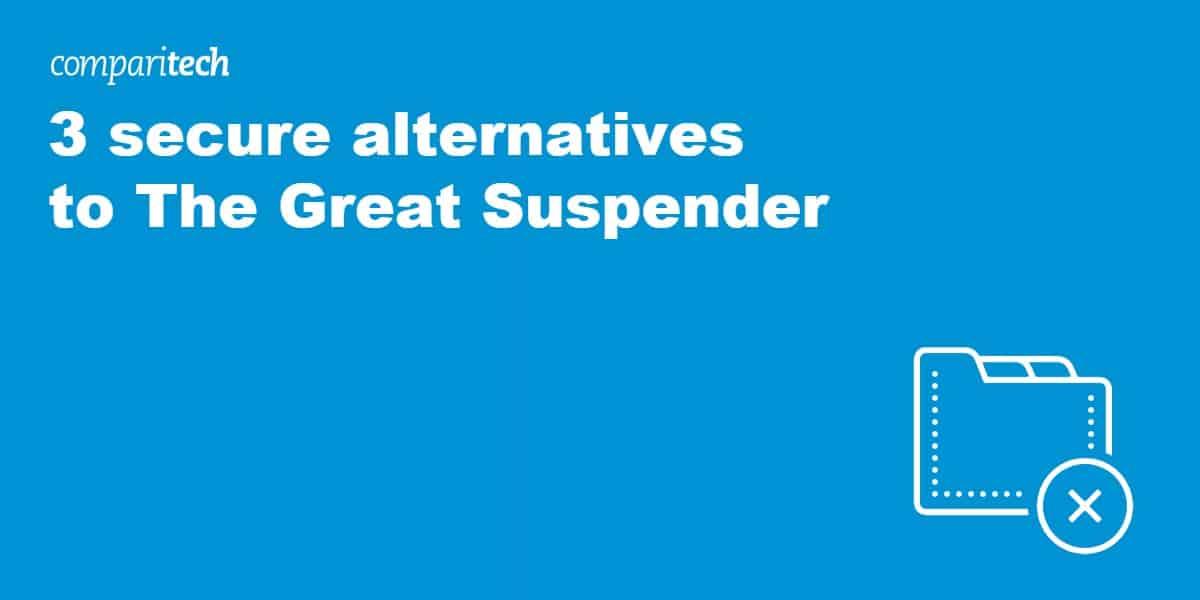 The Great Suspender had a very simple premise; it would suspend browser tabs that you weren’t using to help conserve your computer’s resources. However, shortly after the addon changed hands, the owner began releasing updates that allowed the addon to track user activities and run arbitrary code from a remote server.

Although the developer later backtracked on these changes, it’s concerning that they were implemented in the first place. Further, with The Great Suspender no longer available in the Chrome web store, there’s never been a better time to switch. That’s why we’ve put together a list of three alternatives, each designed to benefit a particular type of user. While The Great Suspender was only available on Google Chrome, all of our recommendations support other browsers too.

3 Safe and secure alternatives to The Great Suspender

Let’s take a look at some of the best tab management extensions you can use instead of The Great Suspender: 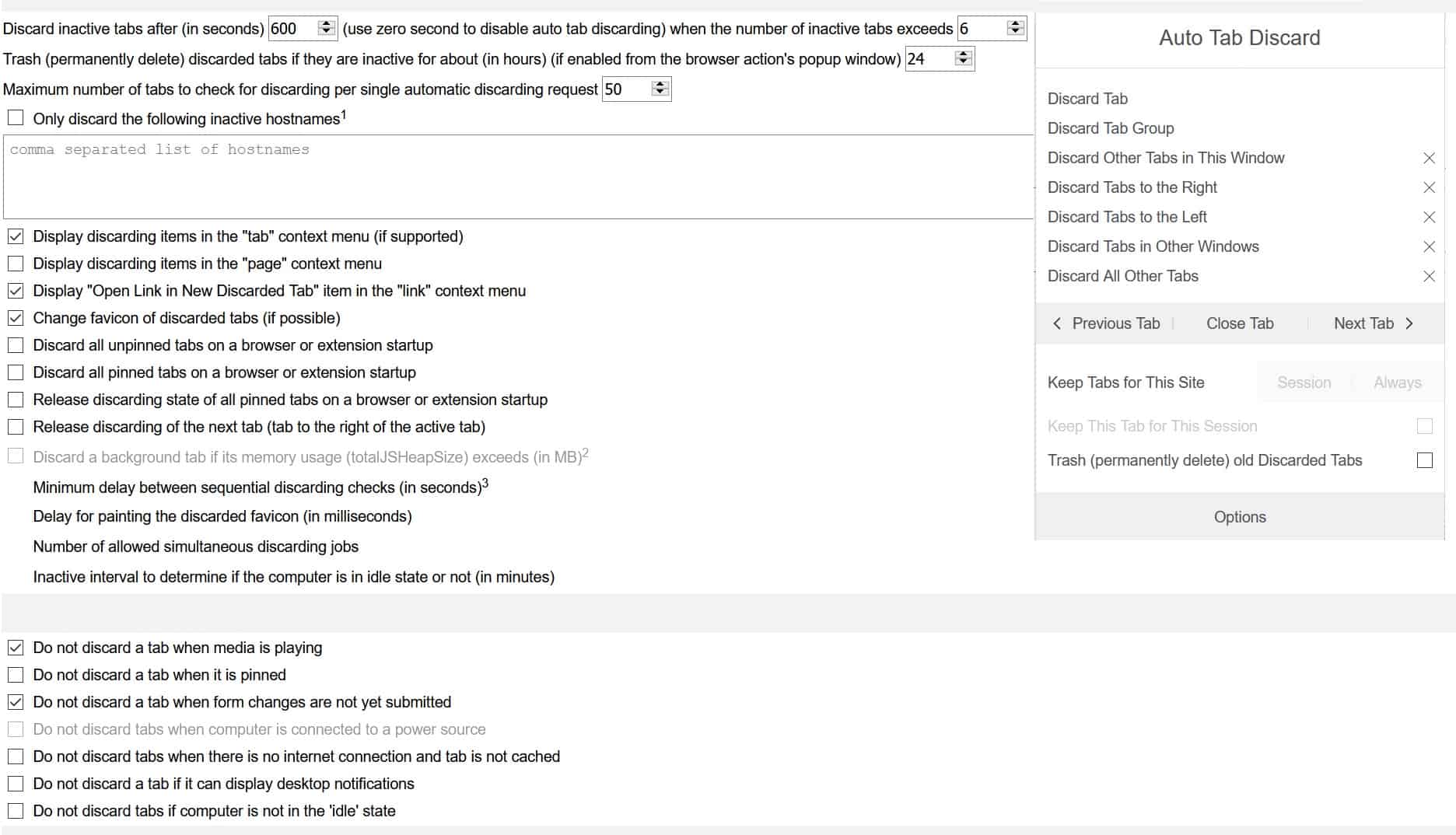 Auto Tab Discard is essentially an open-source, more customizable alternative to The Great Suspender. It allows you to easily move between open tabs and offers a ton of advanced features to really help you customize your setup. For instance, users can:

Needless to say, this is an extremely flexible application with all kinds of use cases. Further, it has a couple of features that arguably make it better than The Great Suspender ever was. First, it returns you to your previous position on the page when you open a discarded tab. Secondly, it uses your browser’s native functions to store tab locations. This means that even if the extension is taken down or your browser crashes, you won’t have to recover your tabs manually. 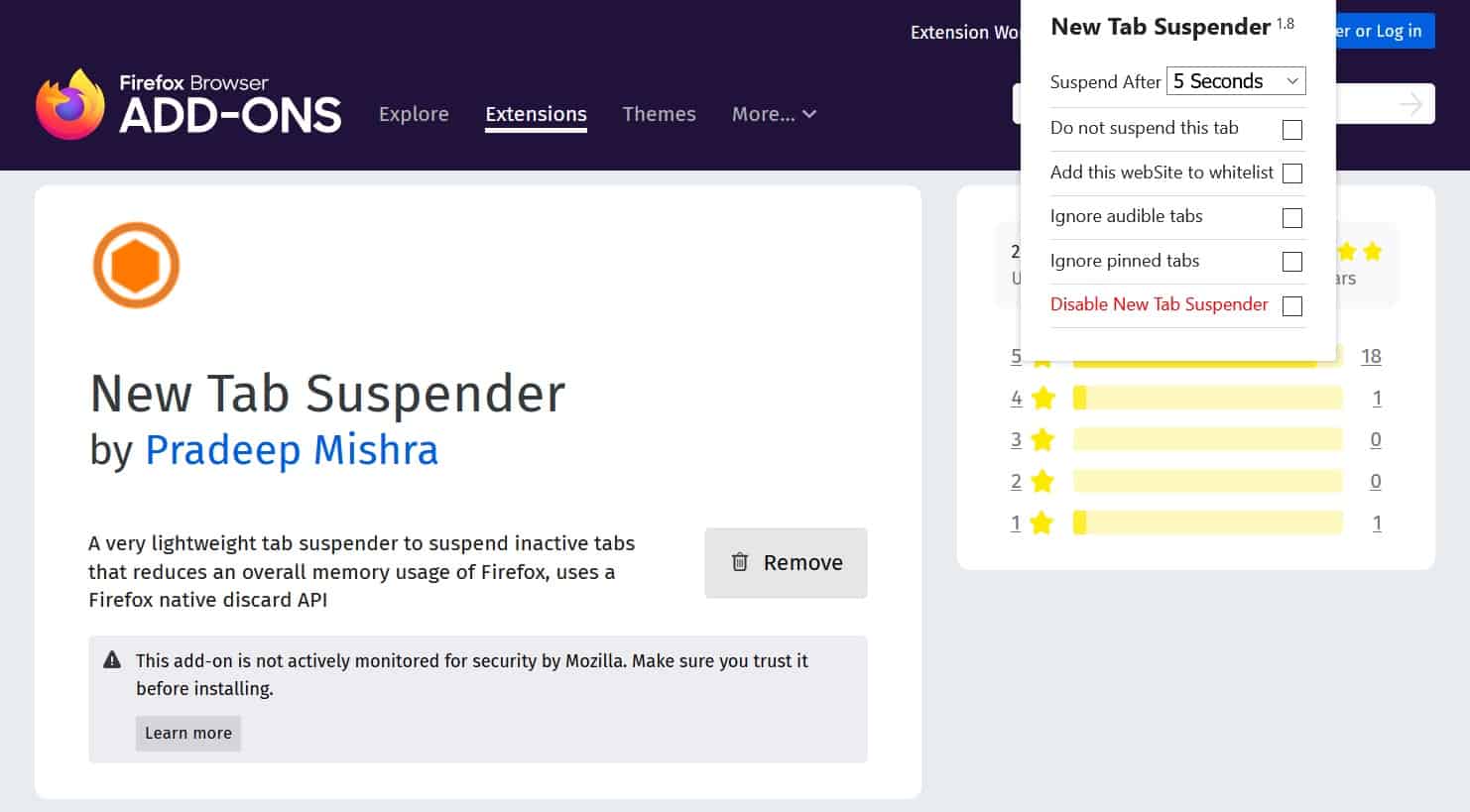 If you’re not bothered about advanced functionality and would rather just have a fire and forget solution, New Tab Suspender might be just what you need. This is a stripped-down extension that’s very easy to use, with just a handful of features including a whitelist and the option to automatically suspend tabs after a fixed period of time.

Like the option above, New Tab Suspender uses native storage features to make sure you never have to manually dig through your browser history looking for tabs that were lost or overwritten. Again, this extension is open-source, so there’s no need to worry about it compromising your security.

For the chronically disorganized: OneTab 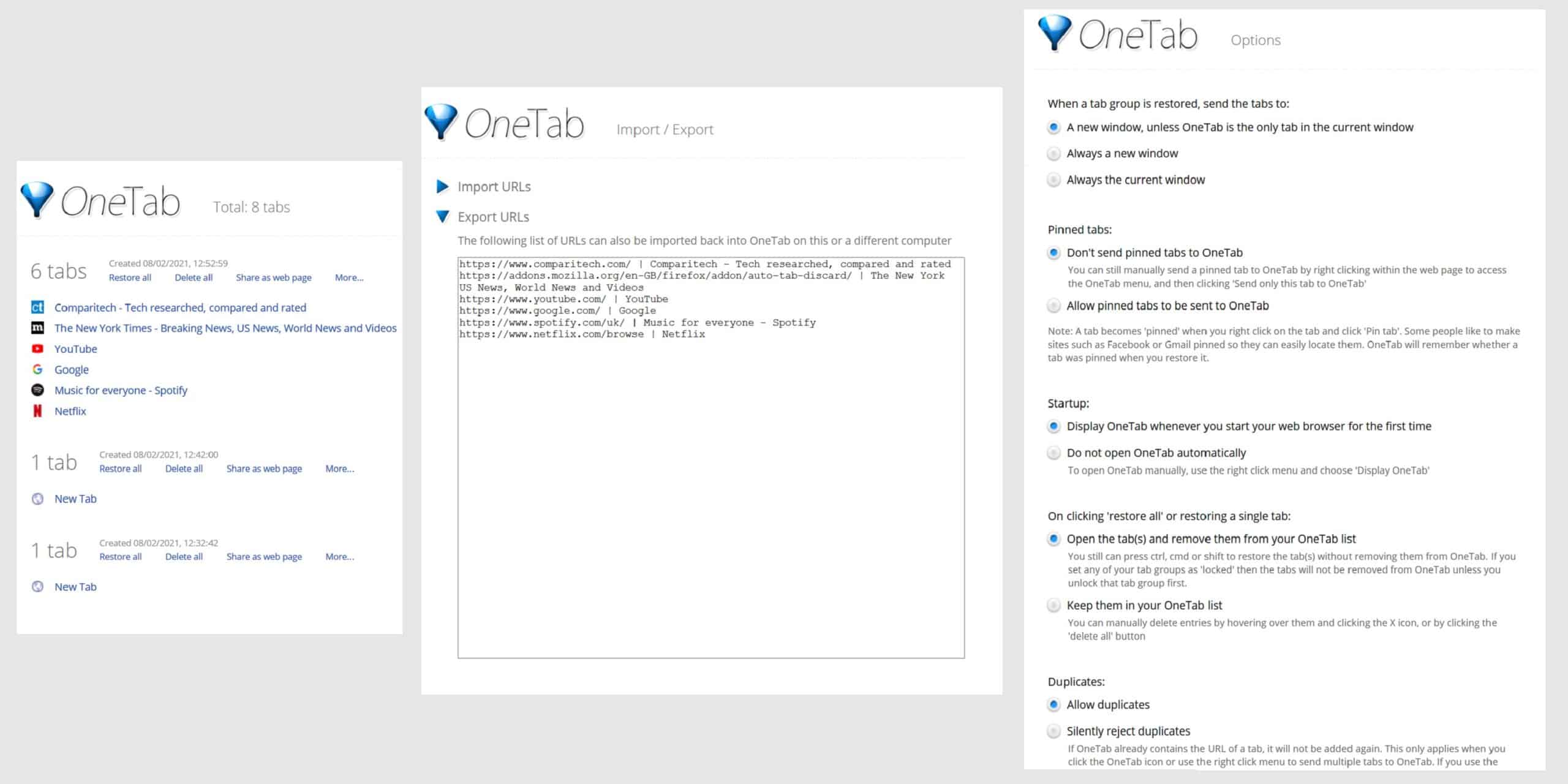 OneTab works a little differently from the other extensions we’ve recommended. It doesn’t technically suspend your tabs at all; rather, with the click of a button, it closes them all and opens a new tab with links to the relevant pages. Of course, since you’ll only have one tab open and there are no scripts running in the background, your CPU and RAM requirements should drop significantly. In fact, OneTab claims it can reduce your memory usage by up to 95 percent.

Users can choose to open links one at a time, or all together. Additionally, while your tab list is usually only visible to you, it’s possible to create a shareable, online copy in case you need to access your tabs across multiple devices.

There is a slight caveat though. Because OneTab stores your tab list in a folder that is frequently overwritten, there is a chance that if your browser crashes, your tabs will be lost. Luckily, OneTab has a feature that lets you save a backup, and it’s a good idea to use this regularly.

If you’re the kind of person who likes to keep lots of tabs open, you’ve probably already noticed that it takes a toll on your system. This is especially true if you’re prone to having dozens or even hundreds of tabs open at a time.

Suspending these tabs prevents them from running in the background. Normally, this simply stops them from performing resource-intensive tasks like playing videos, which helps keep your overall CPU and memory usage low. However, it can also prevent sketchy sites from using your hardware to mine cryptocurrencies without your knowledge (at least until you visit that particular tab again).

Why was The Great Suspender taken down?

Essentially, whoever owns The Great Suspender pushed out an update in November 2020 that allowed the extension to run code from a remote server. Obviously, this is a huge problem, security-wise. It essentially created a backdoor that could be used to monitor your activities, steal credentials, or even install additional malware.

Further examination by intrepid GitHub users revealed several shocking facts. First, not only did the new version of The Great Suspender contain malware that was pretending to be above-board analytics software, but it also had the ability to intercept and modify every website you see. To make matters worse, potentially shady features were being introduced that weren’t mentioned in the patch notes.

Clearly, Google realized something was amiss and pulled the extension from its Chrome web store. It was the second major browser to drop support for this addon; Microsoft Edge removed it shortly after its first malicious update in November.

This is just a brief overview of why The Great Suspender was taken off of the Google Chrome web store. However, GitHub user TheMageKind has written a fantastic, extremely detailed explanation of the situation. If you have the time, we highly recommend giving it a read; it manages to be both technically detailed and easy to follow.

How can I check if my version of The Great Suspender is safe?

Realistically, though, why take the risk? The current owner could take all older versions offline whenever they like. Worse still, they could create a compromised version with the same name. Plus there are better, easier-to-install options out there. There’s simply no need to stay loyal to a service that attempted to monitor you without your knowledge.

For peace of mind, run a malware scan

At this point, it’s hard to say what exactly The Great Suspender was doing. In fact, given what we know about the malicious update and the fact that its code was obfuscated (e.g. made intentionally difficult to read), it seems like this was a deliberate decision.

First things first: it’s a good idea to scan your system for malware. We recommend using Avira Free Antivirus; it’s lighweight and not only scans for malware, but adware, spyware, and other potentially unwanted programs too.

Once you’re done, it’s time to start changing the passwords of any services you’ve used since the malicious update in November. We don’t know for sure whether users’ login credentials were stolen, but the risk is too high to ignore the possibility. While you’re at it, why not use our password strength checker to make sure your accounts are as safe as possible?

How can I recover my lost tabs from The Great Suspender?

Unfortunately, it’s very difficult to recover tabs if you no longer have access to The Great Suspender. Your only option is to look through your browser’s history, reopening any tabs that you hadn’t gotten around to yet.

If a tab was suspended, then lost before you could revisit it, its URL might include the string “klbibkeccnjlkjkiokjodocebajanakg”. This appears to be a sloppy attempt to provide a specific string you can search for to help filter through your history. However, this seems to work inconsistently, making it effectively useless. Further, the user has to manually strip this string from the URL before they can reopen any tabs they find.