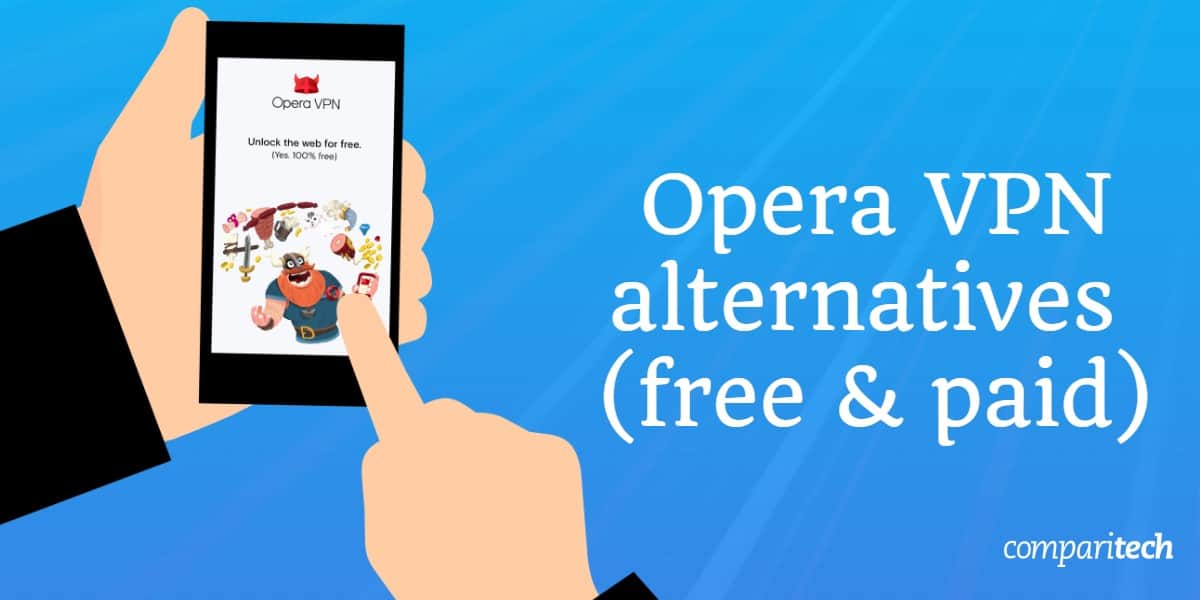 Opera is closing down its standalone VPN service, Opera VPN, the company announced last month. Shuttering Opera VPN will only affect users of the iOS and Android apps. It will not affect the built-in VPN included with the Opera Browser.

Opera VPN is being acquired by SurfEasy, a VPN company that Opera acquired in 2017 and later sold to cybersecurity firm Symantec. SurfEasy still operates Opera Browers’s built-in VPN as a white-labelled service.

Opera VPN permanently discontinued service on April 30, 2018. It recommends users switch to SurfEasy, which also operates its own standalone VPN service. SurfEasy offers both free and paid tiers, but if you’re in the market for a new VPN, better options are available.

Other VPN providers offer faster speeds, better security, and more access to censored and geo-locked content than SurfEasy. In this article, we’ll list the best Opera VPN alternatives based on the following criteria:

Windscribe offers a free, no-expiry tier of its VPN service limited to 10 GB of data transfers per month. That’s the most downloads you’ll get out of any reputable free VPN provider. You can choose from eight server locations, and P2P filesharing is allowed on some of them. You can choose from the more secure native VPN app or a less secure but more convenient browser extension, or combine both for maximum privacy.

Despite being free, Windscribe doesn’t keep any logs. Military grade encryption and perfect forward secrecy are enabled on all connections. The paid version gives access to more servers, more simultaneous connections, and the ability to unblock geo-locked content like US Netflix.

Tunnelbear is a privacy-conscious VPN provider with both paid and free tiers available. The free version never expires but only gives you 500MB per month to work with, which is really only enough for occasional web browsing. On the plus side, free users have access to 19 locations.

All connections are protected with strong encryption and perfect forward secrecy. Tunnelbear keeps no logs and doesn’t use any trackers or ad injection. Apps are available for Windows, MacOS, iOS, and Android.

Speedify doesn’t use a traditional VPN protocol and instead utilizes a homebrewed version of TLS encryption called ChaCha. Speedify says this is faster and better suited to mobile devices. Data is capped at 1 GB per month on the free version, and 35 server locations are available. That’s more than a lot of paid services offer.

Apps are available for Windows, MacOS, iOS, and Android, but the company focuses on mobile platforms.

Free users are limited to three server locations, and torrenting is allowed. Apps are available for Windows, MacOS, iOS, and Android.

ExpressVPN is a premium VPN service that costs a bit more than most but delivers on all fronts. Speeds are consistently above average. Cutting-edge security standards consist of military-grade encryption, perfect forward secrecy, and airtight leak protection. The company does not log your online activity or your IP address.

Netflix, Hulu, BBC iPlayer, and Amazon Prime Video are all accessible with ExpressVPN. Just contact the 24/7 live chat support to ask which servers work with which streaming channel.

BEST OPERA ALTERNATIVE VPN:ExpressVPN is our Top Choice. Leads the way with its easy to use no-fuss easy to use apps. It has a vast server network that is optimized for high-speed connections. Hard to beat on privacy and security. Works with all major streaming services including Netflix. There is a 30-day no-quibbles money-back guarantee so you can try it risk-free.

NordVPN allows up to six simultaneous connections on a single subscription. You get access to a huge network of servers around the world. The company keeps absolutely no logs of user activity or connection metadata. Your data is protected with high-end encryption, leak protection, and an app-specific kill switch.

NordVPN unblocks Netflix, Hulu, BBC iPlayer, Amazon Prime Video, and other geo-locked content. You can ask customer support or just search the company’s online knowledge base to find out which servers to connect to.

IPVanish offers remarkable speeds to its worldwide network of servers. The company adheres to a strict no-logs policy and uses only the latest and greatest security standards. That includes perfect forward secrecy and 256-bit AES encryption. A kill switch and traffic obfuscation can be activated in the apps.

IPVanish isn’t that great for unblocking streaming sites like Netflix, but it is a favorite among Kodi users. If you’re a Firestick user in particular, IPVanish makes its app available on the Fire TV app store. The apps are remote-control friendly and work with all Kodi addons.

LARGE NETWORK:IPVanish is great for families. Good at unblocking most geo-restricted content. Recommend for their high standard of privacy. Could do with a live support option. 7-day money back guarantee.

CyberGhost is a Romania-based provider that has rapidly expanded its service in the past year. You can choose from a global network of servers based on how you plan to use the VPN, rather than just selecting a location. Those use cases include unblocking sites like Netflix, BBC iPlayer, and Amazon Prime Video.

CyberGhost is armed with uncrackable encryption and top-notch security standards, including a kill switch and DNS leak protection. The service routinely scores near the top of our speed tests, so you’ll be sure to find a fast connection.

BEGINNERS' CHOICE:CyberGhost is easy to use. A budget choice. Good on privacy. Streams HD video reliably. Hit and miss connections with some popular streaming sites. 45-day money back guarantee.

PrivateVPN is a relative newcomer in the VPN space, but that hasn’t prevented it from competing with its veteran rivals. You get both security and speed on par with bigger and older VPN providers, including perfect forward secrecy, a kill switch, and DNS leak protection. Speeds are consistently among the fastest we’ve recorded. The company keeps no logs of your activity or connections.

PrivateVPN is great at unblocking geo-locked content. Netflix, Hulu, BBC iPlayer, and Amazon Prime Video are all accessible, among others. You can connect up to six devices at one time on a single account.

GOOD SPEEDS:PrivateVPN is a good family choice. Good for HD Streaming. Allows up to 6 devices on the same account. Could do with having more servers and lacks 24/7 support. 30-day money back guarantee.

Why not just use SurfEasy and Opera Browser?

If you’re an Opera Gold subscriber, SurfEasy is offering a free upgrade to SurfEasy Ultra, a similar premium offering. For everyone else, switching to SurfEasy probably isn’t worth your time.

The free version of SurfEasy caps data at 500MB per month, which won’t get you far. The premium option isn’t all bad but you’ll get more security, speed, and features with the recommended alternatives above, and often at a lower price. Save for IPVanish, all of the VPNs in our list are better at unblocking geo-locked content like Netflix than SurfEasy.

Desktop users who use the VPN built into Opera Browser aren’t really affected by the recent changes, but should consider other options nonetheless. Opera owns and operates an advertising network, and that advertising network depends on collecting usage data in order to make a profit. When you use Opera’s built-in browser VPN, the company still tracks what you do online and uses that data to sell ads, in particular by using the browser’s unique device ID.

Furthermore, Opera Browser’s VPN isn’t even a real VPN. It’s an encrypted proxy that only tunnels traffic to and from your web browser. That means other apps and process aren’t protected, and your DNS requests can also be sent outside of the encrypted tunnel, so your ISP and hackers can track what websites you visit.

If you don’t follow VPN providers and other software vendors as closely as we do, the implications of shutting down Opera VPN can be a bit confusing. To clear things up, we contacted Opera to ask about the relationship between these three companies.

SurfEasy is today owned by Symantec and is not affiliated with Opera.

A spokesperson for Opera told Comparitech in an email: