Find out about traffic obfuscation, stealth servers, and other related jargon that VPN providers use in this guide. Plus, we list some of the best VPNs to choose if you're looking for strong security online.
Aimee O'Driscoll VPN AND CYBERSECURITY EXPERT 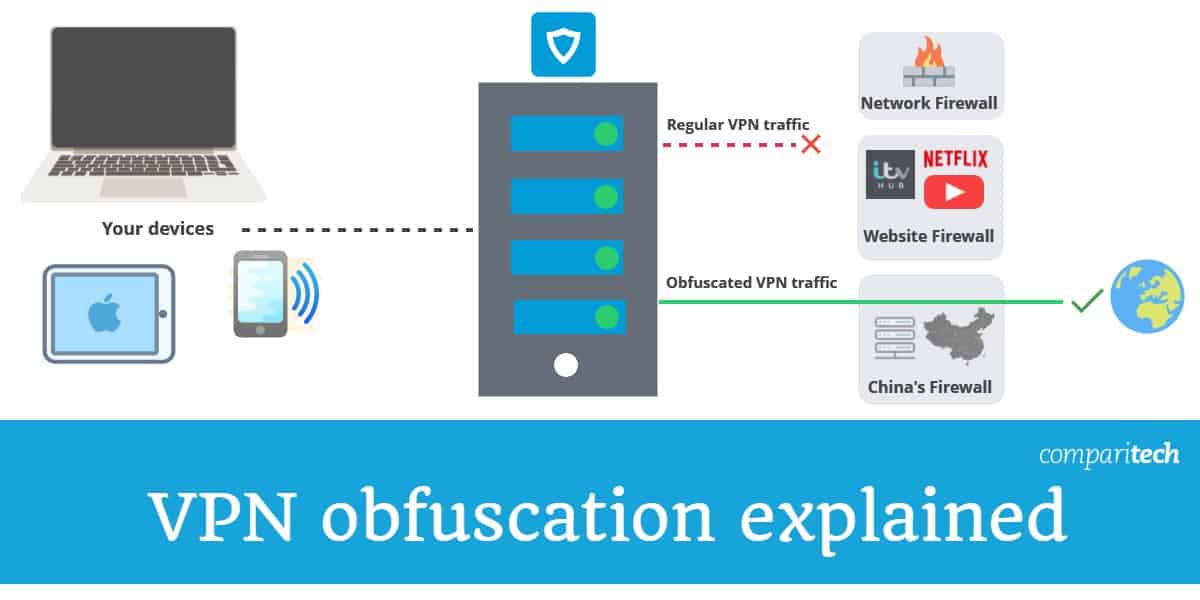 Some governments, Internet Service Providers (ISPs), and network administrators aim to detect (and often block) VPN traffic for various reasons. VPN obfuscation refers to masking VPN traffic such that isn’t easily identified as such. Related terms in VPN provider literature include “obfsproxy servers,” “traffic obfuscation,” “stealth VPN,” and “cloaking technology.” But what do these really mean?

In this post, we help you make sense of this confusing terminology. We discuss what obfuscation is and why you need it. We also explain the different methods used for traffic obfuscation and recommend a few VPNs that do it very well.

While many VPNs claim to offer superior obfuscation methods, many of them don’t work to bypass government blocks. And of those that do work, there’s a great deal of variation in the quality of the service in terms of speed, security, and support. Below is a look at the best VPNs on the market that offer obfuscation.

NordVPN is offering a fully-featured risk-free 30-day trial if you sign up on this page. You can use the VPN we rate #1, with no restrictions for a month—great if you want to test out the provider before making a commitment.

Best VPNs for obfuscation – at a glance

We’ve compared the most important features for the top VPNs here. Prefer to read the in-depth reviews? Start with NordVPN – our #1 choice for obfuscation.

What is VPN obfuscation?

The dictionary definition of “obfuscation” is:

the action of making something obscure, unclear, or unintelligible

VPN obfuscation disguises VPN traffic such that it no longer looks like VPN traffic. This way, it can be hidden from anyone trying to detect it. Obfuscation techniques don’t change the traffic itself, but rather create a mask that hides recognizable patterns.

OpenVPN is the default protocol used by most VPNs. It secures data by encrypting it, but it also adds a distinctive signature. Some detection techniques, in particular, advanced deep packet inspection (discussed below), can detect this signature.

The purpose of VPN obfuscation is to continue to transfer the data in a secure (encrypted) manner, but to hide the nature of the traffic so that it can circumvent blocks.

There are various methods used to obscure VPN traffic, but they generally involve adding a layer of encryption that disguises the traffic as regular traffic. We’ll discuss these below, but first, we’ll take a look at why we need to mask VPN traffic in the first place.

Why do you need VPN obfuscation?

There are several major reasons you might need to hide the fact that you’re using a VPN:

Let’s look at these in more detail:

In some countries, such as China, Egypt, Iran, North Korea, and Pakistan, the government heavily restricts access to the internet. They often block select destination websites by stopping traffic that’s traveling to those sites. For example, in China, the “Great Firewall” comprises various methods to prevent users accessing blocked sites and apps such as Facebook, WhatsApp, and Twitter.

To bypass these blocks, many users employ the use of a VPN. When connected to a VPN, the user’s traffic is encrypted so the contents are unreadable. A VPN also sends traffic through a secondary server, so inspection of the traffic would reveal that it’s going to the VPN server, not the banned destination website.

Of course, the Chinese government has caught on to the fact that people use VPNs to bypass blocks. In response, they attempt to block VPN traffic. This can be done in several ways. For example, if the VPN server is known to the government, they can simply block traffic going to that server. This happens frequently, even to top VPNs, which is why providers have to stay on their toes and be ready to send traffic through different servers that aren’t known to the government.

More advanced blocking methods involve the detection of the nature of the traffic itself. Deep Packet Inspection (DPI) can detect the unique signature that OpenVPN bears. If VPN traffic is detected, it’s blocked. This is where obfuscation comes in. By disguising the VPN traffic as something else, some VPNs manage to bypass advanced DPI methods.

If you’re using a VPN in your office or school to bypass blocks, it may not always work. Some network administrators put methods in place to detect VPN traffic. Obfuscation will help circumvent these detection measures and bypass blocks as normal.

Most obfuscation methods serve as an additional layer of security, privacy, and anonymity for your data. With an extra layer of encryption, it’s difficult for any snoopers to detect that you’re using a VPN. This includes your ISP, government agencies, and cyber criminals.

Whether you’re simply security-conscious and want to keep hackers at bay, or you’re a journalist or activist looking for extra online privacy, obfuscation can help.

Many ISPs throttle your internet speed if they see you’re streaming, downloading, or visiting certain websites. A VPN should prevent this from happening as your ISP can no longer see the contents or destination of your traffic.

However, your ISP may be able to detect that you’re using a VPN, and some users report that their ISPs throttle VPN traffic. While it’s more likely that slowdowns are due to the VPN itself (encryption slows down connections), it is plausible that some ISPs might indiscriminately throttle VPN traffic. If this is the case, then obfuscation should help to prevent this practice.

See also: How to stop ISP throttling with a VPN

How does VPN obfuscation work?

When reading about the features of various VPNs, you may come across terms related to VPN obfuscation. There are lots of “buzzwords” related to this topic, but many of them mean roughly the same thing. Some examples are “stealth VPN” or “stealth mode,” “cloaking technology,” “scramble,” and “obfuscated servers.” These all mean that the VPN is using some method of obfuscation to disguise your traffic when you use the appropriate settings. Some providers come up with novel names for their obfuscation methods, for example, Surfshark’s “NoBorders mode” and VyprVPN’s “Chameleon protocol.”

So what are they actually doing to your VPN traffic? Below are some of the methods VPN providers may use for obfuscation. Note that for any sort of obfuscation to work, both the client and the server need to be set up to use it. For example, Obfsproxy needs to be configured on both the VPN app and the server to work.

Obfsproxy is a subproject of the Tor project (responsible for the anonymous Tor browser). It was created in response to the blocking of Tor traffic in some countries, such as China. It obfuscates Tor traffic such that it is no longer recognized. Although Obfsproxy was developed for use with Tor, it can also be used with OpenVPN.

Stunnel is open-source software that masks OpenVPN traffic as TLS/SSL traffic. TLS/SSL is a type of encryption that’s used by HTTPS. The VPN traffic is routed through a TLS/SSL tunnel, adding another layer of encryption, and making it appear to any snoopers that it’s regular HTTPS traffic.

Shadowsocks is a type of proxy that’s often used to bypass censorship in countries like China. Although Shadowsocks is usually used alone, it can also be paired with a VPN to mask the encryption used in the VPN protocol. Notably, Shadowsocks works with Wireguard, a newer and more lightweight VPN protocol that’s being adopted by many VPN providers.

OpenVPN XOR scramble uses the XOR cipher to disguise OpenVPN traffic. This is a simple cipher that involves the replacement of the value of each bit of data with another value. This is enough to ensure that some DPI methods can no longer detect the OpenVPN signature. However, the simplicity of XOR means it isn’t always effective against government blocks.

It’s worth noting that XOR has gained notoriety as a popular tool used by malware developers to hide their code from detection.