How to stop and bypass bandwidth throttling with a VPN 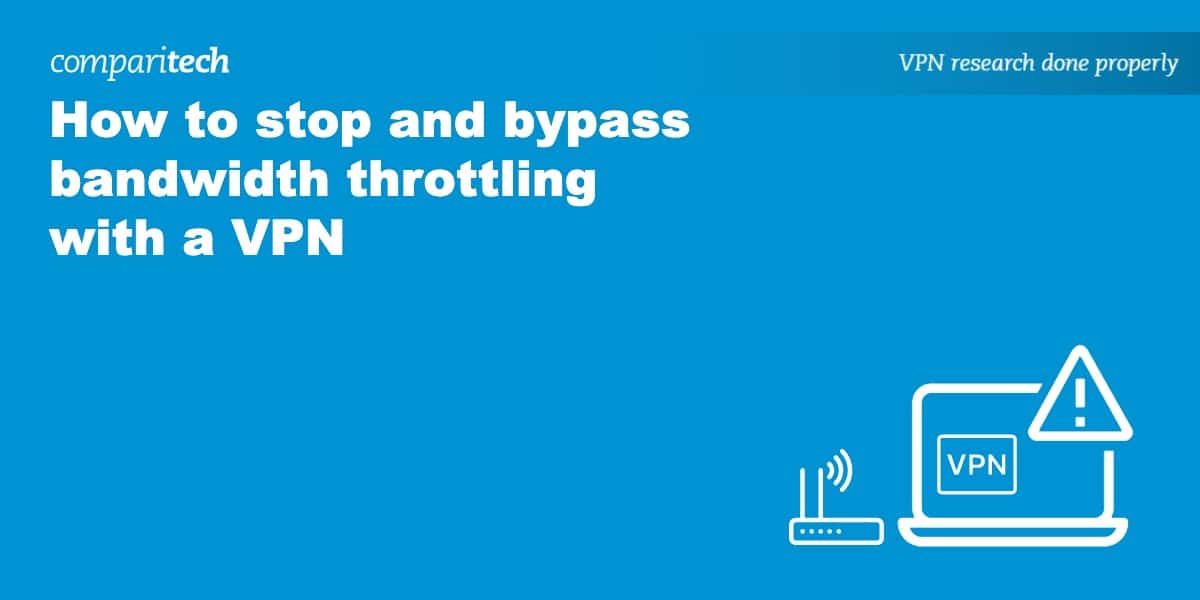 Bandwidth throttling occurs when someone intentionally slows down your internet speed. Anyone with administrative privileges over the network who reduces the amount of available bandwidth is engaging in bandwidth throttling. When it comes to issues of censorship and net neutrality, the perpetrator is typically the internet service provider and/or mobile carrier. But throttling is also common on public networks at hotels, cafes, airports, and restaurants. In this article, we’ll talk you through the reasons why your internet might be being throttled and teach you how to bypass the issue by using a VPN.

Short for a virtual private network, a VPN encrypts all of a device’s internet traffic and routes it through a server in a location of the user’s choosing. VPNs also add a strong layer of privacy to everything you do online, preventing your ISP and governments from snooping on your activity. They secure wifi networks against hackers, you can use them to unblock geographically-restricted content, and they can uncensor the web in environments where certain content is blocked, such as corporate office buildings and schools.

Reasons for throttling your bandwidth can vary from one ISP to another, but here are a few common examples:

Whatever the reason behind ISP throttling, it can significantly impact your internet experience. It can affect streaming speeds, download times, and the overall performance of specific applications. You may also experience higher ping times when playing online games or using voice-over-IP services.

The first two cases can be remedied with a VPN. The VPN’s encryption prevents your ISP and anyone else on the network from seeing the contents of your web traffic while the server disguises that traffic’s destination. VPNs also mask the type of internet traffic, so there’s no way for your ISP to differentiate between VPN traffic from a web browser or a BitTorrent manager, for example.

If yours is the third or fourth case, there’s not much that can be done. Save for switching providers, your ISP will always know how much total data and bandwidth you consume. However, many VPNs can compress data before sending it in order to save bandwidth, which could lower your total data consumption. Some can block ads and other forms of unwanted traffic, saving your precious kilobytes.

How to prevent bandwidth throttling with a VPN

Getting set up with a VPN is much simpler than you might think. Just follow our simple step-by-step guide below.

Here’s how to bypass internet throttling with a VPN:

And that’s it! All your internet traffic will now be encrypted and routed through the VPN server. This should allow you to bypass most types of bandwidth throttling, as laid out above. If your ISP was throttling bandwidth for torrents, they should download faster. If it was throttling video, it should now stream smoother.

NordVPN is offering a fully-featured risk-free 30-day trial if you sign up at this page. You can use the VPN rated #1 for bypassing bandwidth throttling with no restrictions for a month—great if you want to binge some shows or need to download some large files.

How do I know if I’m being throttled?

A simple speed test should be enough to ascertain whether your bandwidth is being throttled. Head over to speedtest.net and run the test. If you are getting speeds significantly below what your subscription promises, even at off-peak hours–then there’s a good chance you’re being throttled.

If you think that a specific website or service is being throttled, this is more difficult to prove. You’ll need to monitor your network while using said website or service to see what sort of speeds you’re getting. This can be done on your device or wifi router if they have such a capability. Windows 10, for example, allows you to monitor network bandwidth under the Performance tab of the Task Manager.

When testing, make sure no other devices in your home are eating up bandwidth. Check to see if you’re running any automatic backups, downloading software updates, or have contracted malware that’s using your internet.

This depends on where you live. Countries with strict net neutrality laws ban the prioritization of traffic. ISPs in these countries are required to treat all traffic equally and cannot intentionally slow down or speed up specific websites, apps, or services.

Bandwidth throttling is generally legal so long as the throttle applies to all traffic and not specific websites and services.

The FCC’s Open Internet Order requires ISPs in the United States to treat all internet traffic roughly the same way. They cannot discriminate by application or service, device, or content. ISPs are categorized under the same rules as utilities when it comes to providing service.

US net neutrality laws are currently under threat, however. The FCC, under the Trump administration, aimed to dismantle the Open Internet Order and instead give the FTC regulatory power over these issues. Critics argue that the FTC will not be able to adequately protect consumers, however, and say the current law should be kept in place.

ISPs want to remove net neutrality laws so they can provide faster access to products and services that benefit them, such as affiliated video-on-demand sites while slowing down competing sites. Verizon was caught testing this sort of throttling as recently as July 2017. They could also charge other companies for fast-lane access on their networks.

Related: The best VPNs for the USA to avoid snooping by the NSA

As part of the EU’s Digital Single Market, ISPs cannot block, throttle, or discriminate against online content, applications, and services. Due to Brexit, however, the future of net neutrality in the UK is uncertain.

Prior to the EU law taking effect in 2015, the UK used a voluntary system to keep net neutrality in place. But once the UK leaves the Union, the current law could be scrapped. And since the majority party doesn’t have the greatest record of protecting citizens’ digital rights (see: the snooper’s charter), there’s a possibility that bandwidth throttling could be on the UK’s horizon.

Related: The best VPNs to protect you from the Snooper’s Charter.

Canadian ISPs are known to throttle the bandwidth of certain protocols. These protocols are detected using deep packet inspection, which identifies the type of traffic traveling through its network. This can be used to reduce the speed of things like peer-to-peer filesharing, which use up large amounts of data and bandwidth. This is sometimes implemented during peak usage hours.

Canadian ISP Rogers has been known to degrade the speeds of all encrypted traffic, which would include VPN traffic.

Related: The 5 best VPNs for Canada

Australian ISPs are known to engage in zero-rating practices but not so much bandwidth throttling. Due to a more competitive market, it’s not in their best interest to prioritize traffic.

The country has not enshrined any actual laws or regulations that prevent bandwidth throttling, however.

Related: What is the best VPN for Australia?

Zero-rating is similar to bandwidth throttling but, unfortunately, cannot be fixed with a VPN. Zero-rating occurs when the ISP doesn’t count traffic to certain websites or services against the user’s data cap.

For example, if AT&T allowed customers to stream videos from HBO Go without expending their monthly data allotment, this would be zero-rating.

Laws and regulations are less clear about zero-rating schemes, but net neutrality proponents are against it. They say it creates an unfair advantage for established players and prevents startups and small businesses from gaining a foothold, thus stifling innovation.

Can You Use a Free VPN to Bypass ISP Throttling?

You could, in theory, use a free VPN to bypass bandwidth throttling, but we wouldn’t recommend it. Free VPNs often lack the level of encryption and security features a premium provider offers, such as DNS leak protection and a kill switch. For this reason, there’s no certainty that your online activities are consistently sent via a secure VPN tunnel. If not, your ISP will have your traffic visibility, allowing it to throttle your bandwidth.