How to use a VPN with Secure Socket Tunneling Protocol (SSTP)

SSTP is a proprietary VPN protocol, developed by Microsoft. In this post, we explain how SSTP works and show you how to create a connection in Windows and Linux.
Marc Dahan Specialist in online privacy 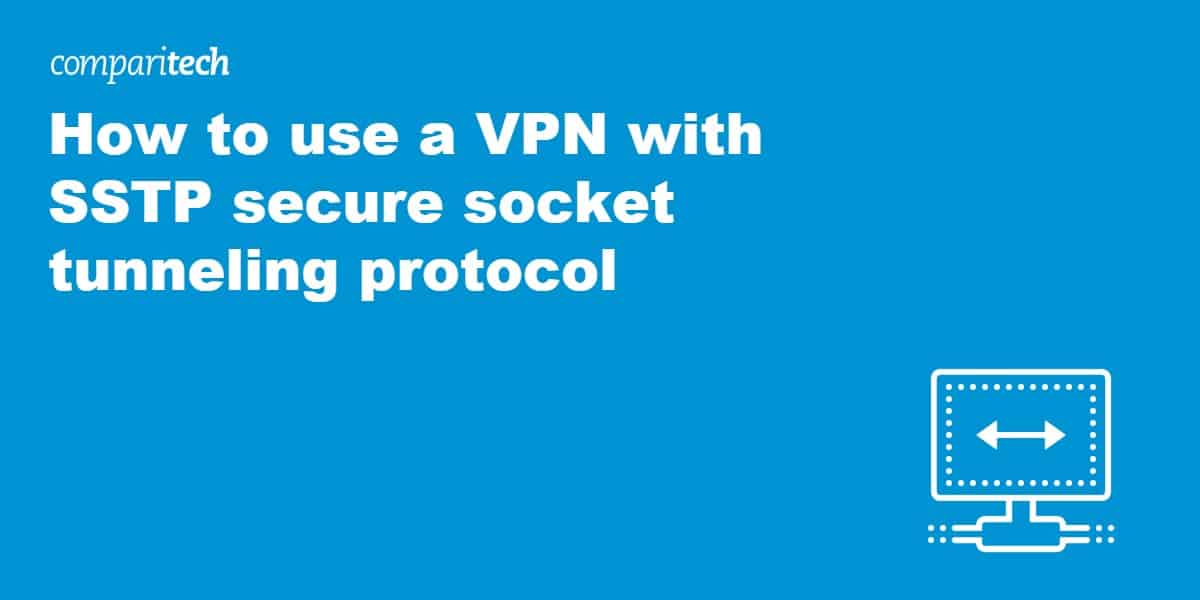 SSTP stands for Secure Socket Tunneling Protocol. It’s a VPN protocol developed by Microsoft, which was made available from Windows Vista SP1 onwards. SSTP is a fairly commonly used VPN protocol—at least among Windows users. SSTP is also supported in Linux, Android, and on many routers. In this post, we’re going to look at what SSTP is and how it works. We’ll also show you how to use it in Windows 10 and in Linux.

SSTP is a VPN protocol. What it does, in a nutshell, is establish an encrypted connection between your device (smartphone, tablet, laptop) and a VPN server. The VPN server then forwards your traffic, decrypted, to the website you requested, substituting your IP address for its own in the process.

PPTP is deemed insecure today and has been for many years now. Even Microsoft itself recommends switching to a different VPN protocol. Microsoft developed SSTP as an updated and more secure successor to PPTP.

How does SSTP work?

SSTP relies on the Secure Socket Layer protocol (SSL) for encryption. SSL is an open-source protocol and is considered very secure. It’s what you use when you log into your online banking site or make purchases over the internet. The SSL library typically uses the AES cipher, which is commonly used in other VPN protocols like OpenVPN and IKEv2.

In fact, SSTP is often compared to OpenVPN because both protocols use SSL, and both can run on port 443 (HTTPS). SSTP only runs over port 443. OpenVPN can run on arbitrary ports, including port 443.

While most VPN protocols default to using the UDP protocol, SSTP exclusively uses the TCP protocol.

UDP stands for User Datagram Protocol. UDP tends to be much faster than TCP because UDP does not include a corrective mechanism at all. It simply sends data through the pipes and hopes for the best. For that reason, it’s sometimes referred to as “Unreliable Datagram Protocol”. It’s because UDP has much less overhead than TCP that it’s usually the default with most other VPN protocols.

TCP, for its part, stands for Transmission Control Protocol. TCP includes a corrective mechanism that ensures the appropriate data was transmitted and in the correct order. TCP will retransmit any missing packets and ensure that they are all in order. This corrective mechanism adds significant overhead to TCP connections, which is slower and can lead to what is referred to as a TCP Meltdown.

When TCP is used in a VPN connection over a spotty network, it becomes quite likely that packets will be either dropped or arrive out of order. When that happens, TCP’s corrective mechanism will request packets to be retransmitted. And if that happens often enough, your VPN connection will slow to a crawl as your packets are retransmitted and reverified. That, specifically, is the TCP Meltdown problem. And SSTP is vulnerable to it.

Even if you don’t get to the “meltdown” point, SSTP will always be slower than VPN protocols that run over UDP. Still, in my experience, SSTP still provides decent speeds—just not something that will blow you out of the water.

On the plus side, because it runs over port 443, SSTP is quite good at bypassing restrictive firewalls. In fact, when OpenVPN users are dealing with restrictive firewalls, one of the most common practices is to use the TCP protocol over port 443, which helps because your traffic appears to be just regular HTTPS, making it harder to distinguish VPN traffic from normal website traffic.

So a network administrator could easily block SSTP connections that go through a non-authenticated proxy server.

One thing that makes some people uneasy about using SSTP is the fact that it’s a closed-source VPN protocol developed and owned by Microsoft. In general, for a VPN protocol to be considered secure, it needs to be open-source. If it’s not, that means that it will not have been publicly reviewed, and nobody can audit the code. You’re left crossing your fingers that the developers got it right. Also, as many have pointed out, Microsoft has been known to collaborate with intelligence agencies, like the NSA, in harvesting and sharing user data—not exactly what you’re looking for when using a VPN.

How to create an SSTP VPN connection in Windows 10

Creating an SSTP VPN connection in Windows 10 is pretty straightforward. Nonetheless, we’ll take you through all the steps.

How to create an SSTP VPN connection in Linux Mint

Depending on your version of Linux Mint, you may or may not already have the ability to add SSTP VPN connections. Either way, you’ll still be able to configure an SSTP connection; you may need to install some additional packages.

To check whether or not you need to install additional packages to configure an SSTP connection, follow the instructions below.

Checking if additional packages are required to create an SSTP connection:

Once the above packages are installed, you have everything you need to configure an SSTP VPN connection in Linux Mint. While the following instructions are for Linux Mint specifically, they are similar enough in most Debian-based Linux distributions that you should be able to follow them in another Linux distribution, as long as it’s Debian based.

We looked at what SSTP is and how it works. We also showed how to create an SSTP connection in Windows 10 and in Linux. And while SSTP does have some things going for it, like robust ciphers and the ability to bypass restrictive firewalls, I would still recommend using OpenVPN, IPsec, or WireGuard. The main reason is that SSTP is closed-source and owned by Microsoft, which isn’t particularly privacy-friendly.

However, if you need to bypass restrictive firewalls, I would specifically recommend using OpenVPN in TCP mode and over port 443. This will get you to the same place as if you were using SSTP, but you’ll be using a tried and tested, open-source VPN protocol, and you won’t have to wonder what Microsoft or other third parties may be doing with your data.