What can a VPN do?

Looking to make the most of your Virtual Private Network (VPN)? Below, we explain how these services work and highlight eight different ways your VPN can help you out.
Ian Garland Streaming, Kodi and VPN Expert 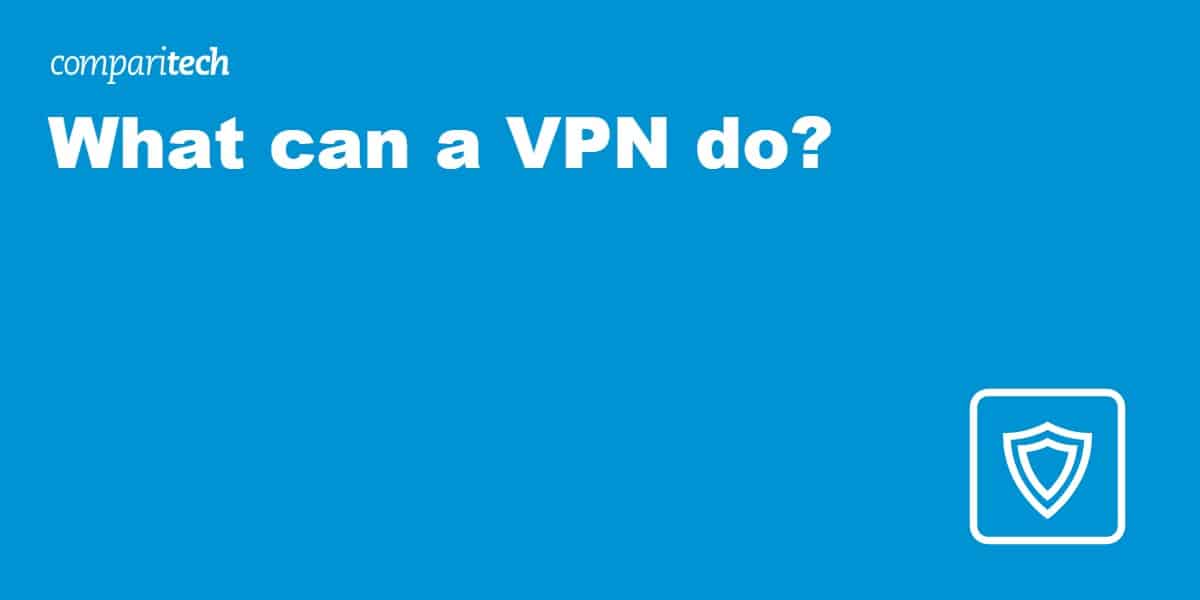 Whether you already have a VPN or are considering getting one, you might not realize how these services work, or just how much you can do with them. We’ll provide a little background on VPNs below, then explain a few of the different uses for the technology.

While VPNs have been around for years, they’ve only recently hit the mainstream. This level of attention, coupled with an influx of new users, has forced providers to push their services further than ever before just to stay relevant. As a result, we’ve seen major VPNs welcome in the next generation of protocols and continuously strive to provide a better service than their rivals. In other words, it’s a buyer’s market; there’s never been a better time to be a VPN user.

How do VPNs work?

Usually, when you use the internet, your computer sends a request to your Internet Service Provider (ISP), which then serves up the website you’ve asked for. However, some ISPs refuse to allow access to specific websites and can reduce your internet speeds if you’re doing something they don’t approve of, like streaming or torrenting.

A VPN essentially works as a middleman between you and your ISP. It encrypts all of your data, preventing the ISP from seeing which websites you’re accessing, and reshaping your traffic so that it’s impossible to tell what kind of activity you’re doing online. Once connected, all your ISP can see is:

There is one other advantage to using a VPN: they allow you to route traffic through a server in a location of your choosing. This means that, if you’d like, you can access content that’s usually inaccessible where you are. If you’d like to find out more, you can check out our in-depth guide to VPN connections.

What can I do with a VPN?

Above all else, these services exist to protect your digital privacy. This could mean a number of things: you might be looking to use public wifi networks without worrying about their lackluster security or maybe you’d just like to use the internet without your employer, college, or network administrator keeping tabs on you.

In either case, your VPN’s encryption and leak protection make this quick and easy. Further, as most major providers refuse to log any data that could identify an individual user, any organization, lawyer, or government that requests user details from the VPN provider will receive no usable information.

Plenty of popular services are only available in certain countries. Some are a little trickier and change their content based on your location. However, they tend to have one thing in common: they primarily rely on your IP address to find out where you are in the world.

When you connect to a VPN, your real IP address is hidden. Instead, the sites you visit will see the address of your chosen server. This means that if you use a server in America, you’ll appear to be browsing from the US, and will be able to access US-only services like Sling TV.

This same principle works on a smaller scale too! For instance, due to MLB blackouts, you usually won’t be able to watch the local baseball teams’ fixtures online if traveling out of state. Connect to a VPN server in your home state, however, and your teams’ matches will be accessible.

Depending on where you are in the world, you might find that certain websites are blocked. The United Arab Emirates doesn’t normally let you use VoIP services like Skype, for example, while China’s Great Firewall blocks huge swathes of content. However, this is just another type of regional restriction, and as long as you use a server based in a different country, you should be able to access whatever you like.

The real problem is that countries with strict online censorship tend to be very good at identifying attempts to bypass their restrictions, so many VPNs won’t cut it. Luckily, several major providers have been hard at work developing cloaking mechanisms (or, in some cases, entirely new VPN protocols) that can hide the fact that you’re using their services at all.

Note: VPNs are not illegal in most countries, but if you have any doubt at all as to the law in your current location, we strongly advise you to research the local laws and regulations before attempting to use a VPN.

Because of the way that P2P systems work, when you torrent, you’re actually connected to every other computer in the swarm. The problem with this is that every other user now has access to your IP address, which opens you up to DDoS attacks, geo-location, and possibly even legal threats.

If you torrent with a VPN active, though, only your chosen server’s IP is visible. This is a dead-end for anyone looking to identify you, although some VPN providers even allow you to route your traffic through multiple servers for even greater anonymity. Further, as a VPN’s network is much larger than your home one, they can usually shrug off DDoS attacks with ease.

Unfortunately, net neutrality rules don’t apply everywhere, and some ISPs have been known to restrict the speeds of users who stream frequently. VPNs reshape your data, preventing anyone from analyzing it and being able to tell what exactly you’re doing. This makes it much more difficult to justify throttling your connection, and allows you to take advantage of the speeds you pay for, regardless of your chosen activity.

6. Get the best possible prices

Just like in the real world, prices for digital goods fluctuate based on your location. A streaming service might offer a low introductory price in Asia, for instance, while charging full price in the US. These platforms are almost always geo-restricted, but you can bypass this kind of blocking and pay as little as possible by using a server in the country with the lowest available price.

7. Play games with friends in other countries

Some games don’t allow you to switch server regions and play with users in other countries. With a VPN active, though, they’ll have no way of knowing where you’re really from, and will simply put you into whichever regional player pool your chosen location corresponds to. You can also use a VPN to play games that haven’t been released in your country yet, or those that are exclusive to one particular country.

If you’ve been wrongfully banned from a game, website, or online service, getting back on is usually as simple as changing your IP address. This can also be helpful for getting more use out of freemium services that ask you to pay after a limited number of free uses.

Which VPNs are best for beginners?

Struggling to decide which VPN to use? No problem! Take a look below for a quick overview of Comparitech’s top-rated VPNs, and what makes each of them so special:

NordVPN is offering a fully-featured risk-free 30-day trial if you sign up at this page. You can use our #1 VPN with no restrictions for a month. This is great for anyone looking to try a VPN for the first time, or those hoping to see how NordVPN compares to the service they’re using at the moment.

Why we don’t recommend using a free VPN

Free VPNs can seem like an obvious choice for those looking for security on a budget, but usually, they only provide a pale imitation of a paid service. You’ll normally only have access to a handful of locations, for instance, and because there are so many other users, speeds tend to be extremely slow. You might find that your chosen VPN only lets you do a limited amount of browsing each month; privacy isn’t something you can just go without some of the time, so it goes without saying that these services aren’t particularly helpful.

It should also be noted that free VPNs are usually not subject to the same testing and vetting processes that paid VPNs are. In other words, they may fail to provide any meaningful security while being more vulnerable to attackers (assuming your chosen service isn’t actively spreading malware). This is a large part of why we advise against choosing a VPN based on price alone; you’ll have a much better experience while remaining safer, if you take a service’s privacy policy, security credentials, and reputation into account as well.