Why there’s no such thing as “the fastest VPN”

Many VPNs out there declare themselves the fastest. It’s a bold statement to make, but also a vague and ambiguous one. Obviously, there can only be one fastest VPN in the realm of superlatives, but that hasn’t stopped several VPN providers from claiming the title for themselves…

These are just a few of the VPN providers that profess their supremacy above all others. In reality, their claims to be the fastest are hollow.

This is not an article to determine which VPN is truly the fastest. This article will explain why the truth is almost impossible to ascertain.

But “fastest” is actually quite a loose, ambiguous term when it comes to VPNs. It could just as well refer to upload speed, latency, how quickly the user can install it, how fast the app runs, the time it takes to initiate a connection, or any number of other variables. When a VPN provider states it’s the fastest, the inherent ambiguity of the word is rather misleading.

In the UK, the national advertising standards authority got involved with broadband providers over misleading claims about speed. But because more measures need to be taken into account, some of which are difficult and time-consuming to verify, penalizing VPNs won’t be so easy. This is compounded by the fact that VPNs are incorporated all over the world and not regulated by a single authority.

Even if we only take into account the assumed factor, download speed, it would still be nearly impossible to award the coveted title of “fastest” to a single VPN. The vast majority of VPN providers run more than one server, each of which run at different speeds at different times. On the provider’s end, factors that can influence download speeds include geographic location, the amount of network traffic, server load, server capacity, level of encryption, and VPN protocol among others.

Even if two users connect to the same server at the same time, chances are they will experience different download speeds. Geographic location, time zone, network traffic, ISP throttling, level of encryption, VPN protocol, UDP or TCP protocol, whether the device is connected over Wi-Fi or LAN, background processes, compression, and much more should all be taken into account on an individual user’s end.

In short, the internet is inherently volatile. Any claim that a single VPN provider is the fastest should be taken with a big grain of salt. So, too, should VPN speed tests performed by third parties.

Despite all of our arguments above to the contrary, Comparitech does perform speed tests on VPNs and posts the results in our reviews. Our aim is not to crown certain VPNs as the fastest and others as false idols, but simply to give readers a general indication of their performance.

Comparitech uses a primitive but effective methodology for testing VPNs. To test speeds as empirically as possible, we download the same compressed file three times from three different servers at three different times per day for a total of nine tests. We do the same without a VPN as a control group. When available, we connect to the nearest US East Coast server, US West Coast server, and a server in the UK. These are chosen because they are among the most popular server locations. In our reviews, we always disclose the location of the tester and the maximum download speed allowed by the local ISP. Those with faster connections may well notice a larger discrepancy in speeds. We only use the OpenVPN protocol over UDP. 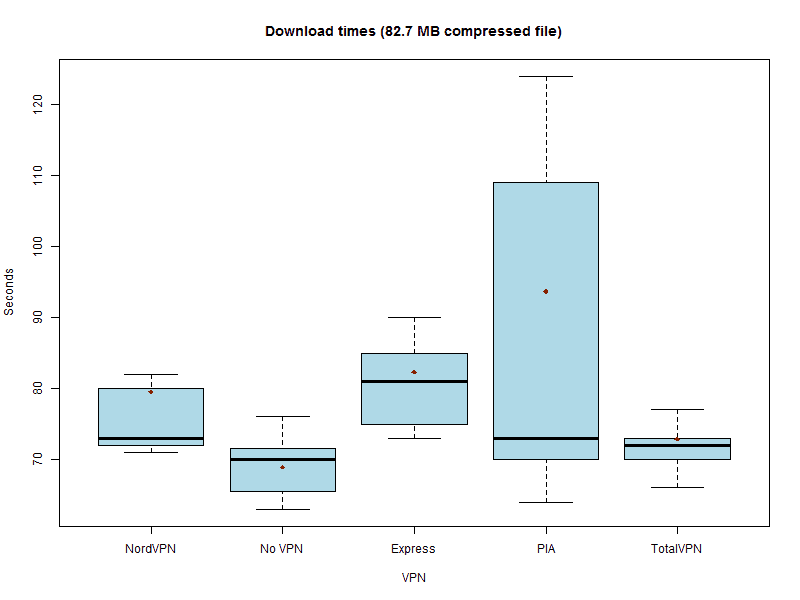 While we believe this method is the most transparent and practical, it’s still not perfect. We did not test all the VPNs listed on the same day. We assessed them from a single location–South America, in this case–but results might differ for those in Europe or Asia. We use a common mathematical standard to remove outliers that appear more than three standard deviations away from the median, but anyone knowledgeable about statistics would tell you even this is imperfect.

You’ll notice the quickest VPN we tested was TotalVPN, a newcomer that doesn’t claim to be the fastest. In truth, this could be because TotalVPN wasn’t very popular yet when we wrote the review. It’s servers could operate with a very light load. Time will tell if TotalVPN can keep up the pace.

Our methodology, while primitive, is superior to most. Many users (and even some “professional” reviewers) will opt for a site like Speedtest.net, TestMy.net, or Speedof.me to rank performance. The problem with many browser-based speed testing sites is that they measure the download rate between the test server and the VPN server, not the VPN server and the user. This can result in some strange findings, such as the download speed result being well above what the user’s ISP allows. It’s not uncommon for a user on a 10 Mbps of available bandwidth to see 25 Mbps download speed when testing over a VPN on Speedtest.net.

Many of these tools also fail to account for compression, especially LZO compression built into the OpenVPN protocol.

Which VPN is the fastest for me?

Instead of asking which VPN is the fastest overall, a better question is to ask which VPN is fastest for you. This mainly depends on your location and the location of the content you’re trying to access. If you want to watch TV shows from the US, for example, look for VPNs with a lot of servers there. If the VPN provider shows live server statuses on its website, check to see if they are at or near capacity during the hours when you stream or download the most.

If the location of the VPN server is not a concern, then a good rule of thumb is to connect to the VPN server located geographically nearest you. This results in the shortest ping times, which reduces latency and lag.

Take advantage of money-back guarantees and free trials to see for yourself which VPN is fastest.

As for VPN providers, Comparitech calls on you to reign in misleading claims about being the “fastest.” Now is a good time for a bit of self-regulation so consumers know they can take the information they see in advertisements and tag lines at face value. Until someone comes up with a verifiable way to measure the speed of every VPN to and from multiple locations simultaneously, VPNs should refrain from claiming they are the fastest.