How to stop WebRTC leaks on Chrome, Firefox, Safari, and Edge [SOLVED] 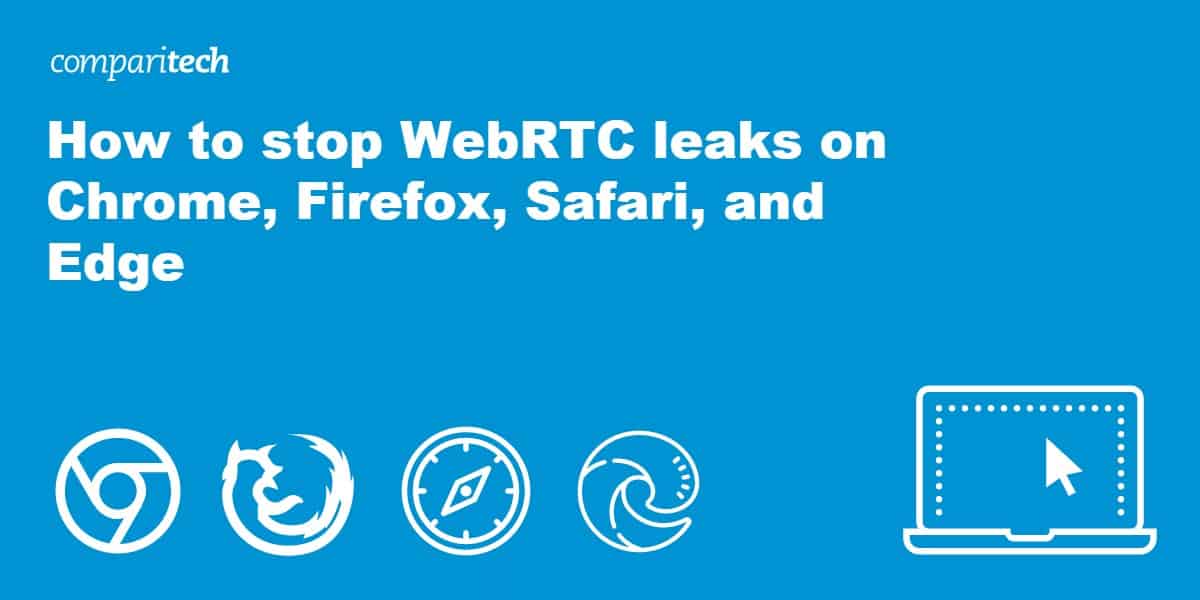 WebRTC is used by web browsers for voice and video chat applications like Skype for Web, Discord, and Google Hangouts. The free and open-source project lets apps set up peer-to-peer connections without the need for any extra plugins or applications, allowing for efficient real-time communication (the ‘RTC’ in WebRTC). Most modern web browsers now support and enable WebRTC by default, including desktop browsers like Chrome, Firefox, Safari, and Edge, as well as mobile browsers on Android and iOS.

The problem is that WebRTC compromises the security provided by VPNs, or virtual private networks. When a user connects to a VPN server, all of the internet traffic from their device should go through an encrypted tunnel to the VPN server. Among other benefits, this prevents websites and apps from determining the user’s real IP address, which is masked by that of the VPN server. An IP address is a string of numbers and decimals unique to every internet-connected device that can be used to determine location.

Whenever a VPN user visits a site that has WebRTC enabled, WebRTC can transmit data outside the encrypted tunnel. This exposes the user’s real IP address and location to the website, which means the user can be tracked by advertisers and other third parties.

In this article, we’ll explain how to prevent WebRTC leaks when using a VPN on all major browsers.

Preferred solution: Use a better VPN

Not all VPNs suffer from WebRTC leaks. Some have added security features to their apps that prevent WebRTC traffic from traveling outside the encrypted VPN tunnel. Of the many VPNs we’ve tested, two stand out:

While many VPNs claim to prevent leaks, many fail to live up to their promises. We’ve put both of these VPNs through rigorous leak tests to ensure they never allow WebRTC leaks to occur under any circumstances. ExpressVPN and NordVPN will both prevent WebRTC leaks on any web browser or app.

By signing up for and installing either of these VPNs, you don’t need to worry about WebRTC leaks. No further tweaks are required.

How do I know if WebRTC is leaking?

When you connect to a VPN, your WebRTC IP address should either change to that of the VPN or be disabled entirely.

As an example, here’s my connection info while connected to a VPN that suffers from WebRTC leaks: 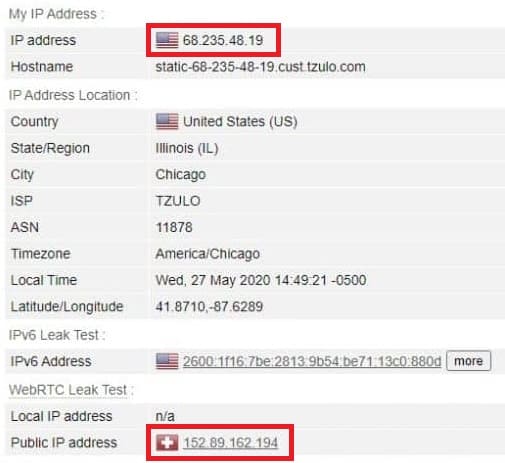 Notice that my standard IP address and WebRTC address are different. That’s because my real IP address is being leaked through WebRTC and WebRTC traffic is not going through the VPN. While connected to the VPN, both addresses should both be identical.

You can run this test on your own using our VPN leak tester.

If a VPN leaks your IP address before you’ve even granted that website permission to use your camera or microphone, that’s a big red flag. That means any website could use some simple javascript to monitor your IP address and expose your real location. We label this a “persistent vanilla leak,” which is the most severe type. Most VPNs that claim to prevent WebRTC leaks can at least stop this from happening.

Except for the two mentioned above, almost all VPNs suffer from the less severe version of WebRTC leaks, in which your IP address is exposed to the website only after you grant it permission to use your microphone or camera. Even though this leak is less severe, it’s still cause for concern. A VPN user should be able to safely visit WebRTC-enabled sites without exposing their IP address.

How to stop WebRTC leaks in Chrome 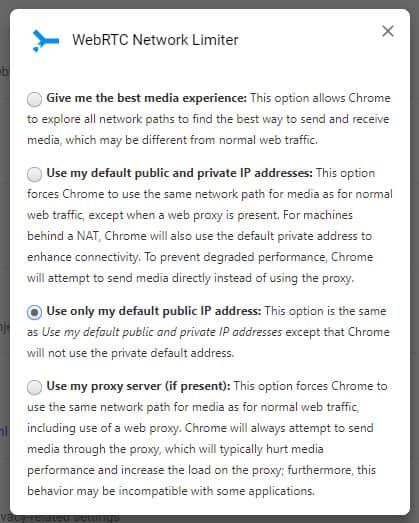 Google Chrome requires a simple browser extension to disable WebRTC. WebRTC Network Limiter lets you choose how WebRTC network traffic is routed. You can easily configure it to use only your VPN’s public IP address.

How to stop WebRTC leaks in Firefox

In Firefox, you can disable WebRTC in the browser settings:

Note that changes you make to the settings may not carry across updates, so you might need to re-adjust this setting again if your browser updates.

How to stop WebRTC leaks in Microsoft Edge

Microsoft Edge now supports both WebRTC plus its own proprietary version, dubbed ORTC. Unfortunately, Edge does not allow you to disable either. You merely get the option to hide your local IP address over WebRTC connections, but not your public IP address.

A “WebRTC Leak Shield” extension is available on the Microsoft app store, but given it has no user feedback at time of writing and sparse details about the developers, we would avoid it for now.

If you’re an Edge user and you want to prevent WebRTC leaks, ExpressVPN and NordVPN will both get the job done. Websites will only see your VPN server’s public IP address and not your own when connected through either of their respective apps.

How to stop WebRTC leaks in Safari 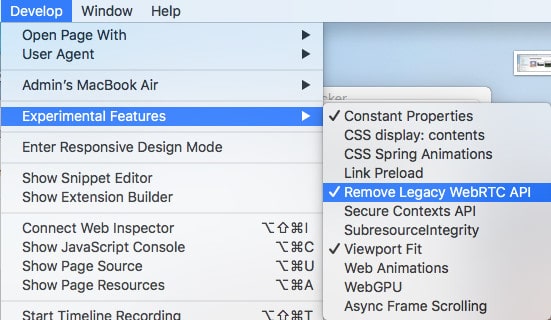 Safari blocks sites from accessing your camera and microphone by default, so we’re really only concerned about the less severe type of WebRTC leak here. You can turn WebRTC off in the developer settings:

How to stop WebRTC leaks on Android

In the latest version of Chrome for Android (tested with 8.1.0 Oreo), it is not currently possible to completely disable WebRTC. Many other tutorials on this subject instruct users to disable WebRTC Stun origin header in the flags menu, but in our experience this does not work. Even if we disable every WebRTC-related setting, our real IP address leaks.

Notably, ExpressVPN and NordVPN do prevent this leak when we connect through their Android apps. Websites can still see an IP address, but it’s the VPN server’s IP address and not our real IP address.

We will update this section of the tutorial if we find a way to disable WebRTC in Android 8 Oreo or, when it is released, Android 9 Pie.

How to stop WebRTC leaks on iOS

You can only disable WebRTC in mobile Safari on iOS 11 or earlier. The setting to disable it was removed in iOS 12. For later versions of iOS (12+), you can use ExpressVPN’s or NordVPN’s iOS app to mask your real IP address and prevent WebRTC leaks.

Disabling WebRTC on the Safari browser in iOS 11 or earlier is fairly similar to the desktop version:

We will update this article if we come across a way to plug WebRTC leaks in iOS 12 and later.

How to stop WebRTC leaks with uBlock Origin 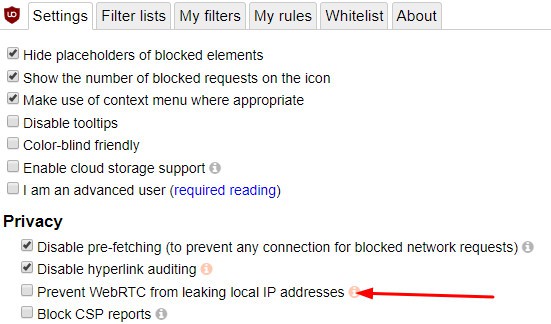 uBlock Origin is a popular browser add-on/extension for Firefox and Chrome. It can prevent your browser from leaking your device’s local IP address, but not your public IP address. For this reason, we recommend uBlock Origin more as a supplement to the other solutions in this list, and not a standalone solution.

After installing it, just go into the Settings and check the box that says, Prevent WebRTC from leaking local IP address.

What about VPN browser extensions?

There’s no shortage of browser plug-ins that claim to work like VPNs by redirecting internet traffic through a secure proxy. The vast majority of VPN browser extensions won’t protect you from WebRTC leaks. The only standalone VPN add-on we know of that does stop WebRTC leaks is NordVPN. In addition to its native desktop and mobile apps, its browser extension for Chrome and Firefox protects against WebRTC leaks.

If you want to stop WebRTC leaks but like to use voice and video chat apps like Google Hangouts, Discord, and Skype, worry not. Disabling WebRTC doesn’t usually break those apps; they just have to fall back on a different method of communicating. While the call quality might suffer a bit, you can still use voice and video chat normally with WebRTC disabled.

Once you’ve applied a fix, you can check to make sure it’s working using Comparitech’s DNS leak test. This page runs a test in two parts: with the VPN connected and with the VPN disconnected. The results will show you in plain terms whether your VPN is leaking DNS, IPv6, or WebRTC traffic. You can even choose whether to allow or disallow microphone and camera permissions to determine leak severity.