HideMyAss makes VPN software for a variety of devices and operating systems, but Amazon Fire TV Stick is not one of them. We'll discuss workarounds and alternative VPNs for Fire Sticks.
Paul Bischoff TECH WRITER, PRIVACY ADVOCATE AND VPN EXPERT 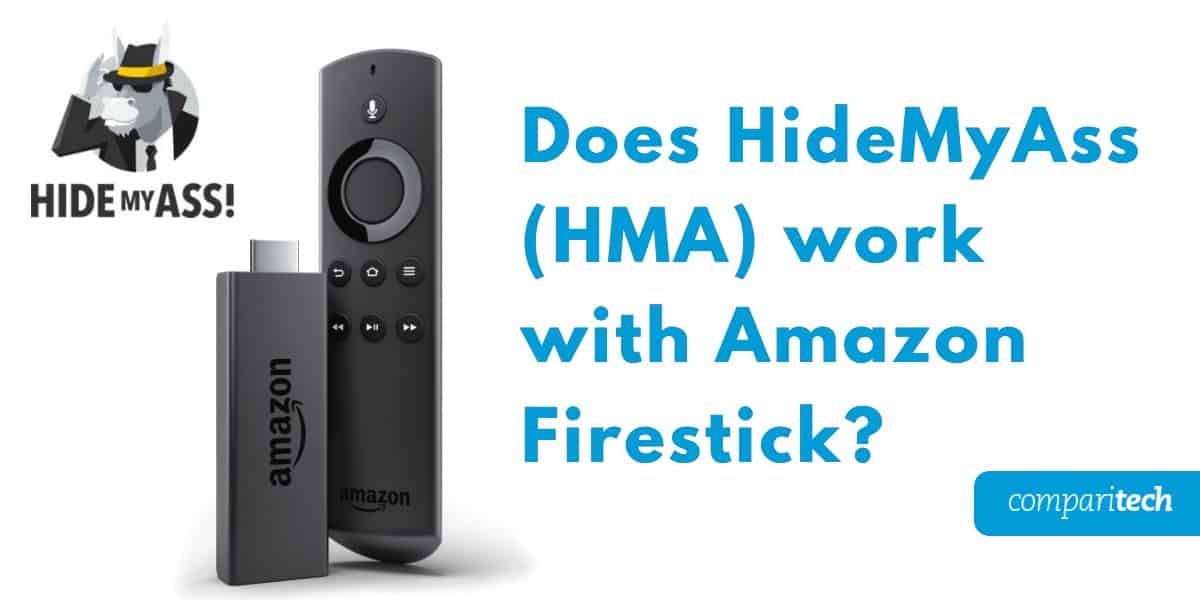 Currently, HideMyAss is not available on the Fire TV app store. Several other VPNs are, however, including ExpressVPN and CyberGhost, two of the highest-rated VPNs available.

Long story short: You can still set up HideMyAss on a wifi router and connect your Firestick to it, but it’s easier just to use a different VPN. We’ll go into more detail below, but first, take a look at our quick summary.

Already using HMA? Jump straight to our workaround for setting up HMA on a Firestick.

Fire OS, the operating system that Fire TV Sticks and Fire Cubes run on, is basically just a spin-off of Android. In some cases, we can use a workaround to install the Android phone versions of apps on Firestick.

But with HMA, that won’t work. We tried. After installing the HMA Android phone app on Firestick, we were greeted with an error page instructing us to update Google Play services. Firesticks don’t have access to Google Play, so this is a dead end.

Because there’s no official HMA app for Amazon Fire Stick and the latest official Android version is incompatible with it, the easiest thing to do would be to choose a different VPN. We’ve listed our top HMA alternatives for Firestick below.

ExpressVPN’s Firestick app can be installed just by searching for it from the Fire TV home screen. After a brief setup, it’s very simple to use. All the default settings work fine for me; all I had to do was choose a location. ExpressVPN runs servers in 94 countries, so you can favorite the ones you use the most.

ExpressVPN unblocks pretty much everything we’ve thrown at it, including Netflix, Amazon Prime Video, Hulu, and BBC iPlayer. It’s also suitable for Kodi users and works with any Kodi addon. It even works in China. If you run into any trouble, the live chat support on the website responds 24/7.

You can connect up to five devices at once. Aside from Fire TV, apps are also available for Windows, MacOS, iOS, Android, and Linux.

BEST VPN FOR FIRESTICK:ExpressVPN costs about the same as HMA and offers a far superior experience. Plus, it comes with a 30-day risk-free money-back guarantee.

No VPN makes it easier to unblock streaming services from out-of-country than CyberGhost. You can literally pick Netflix out of a list, and it will connect to the right server. Speeds are fast enough for high quality, uninterrupted video streams.

You can connect up to seven devices at once. In addition to the Firestick app, CyberGhost is available on Windows, MacOS, iOS, Android, and Linux.

BUDGET FRIENDLY:CyberGhost comes in at a much lower cost while offering competitive security, speed, and features. It comes with a 45-day money-back guarantee.

NordVPN is another VPN catering to Fire Stick and Android TV users. The app’s simple interface works well with the Amazon remote. Setup is quick, so you can go from signup to a connection in a few minutes. NordVPN is highly recommended for users who value privacy and security, but still want to stream their favorite shows from abroad.

Live chat support is available 24/7, but the service has always proved reliable for us. It unblocks Netflix, Amazon Fire TV, Hulu, BBC iPlayer, and several others if you’re traveling abroad.

NordVPN lets you connect six devices at a time. In addition to Fire TV, apps are available for Windows, MacOS, iOS, Android, and Linux.

SECURE STREAMS:NordVPN keeps your online activity private and unblocks a range of streaming services. It comes with a 30-day money-back guarantee.

Hotspot Shield recently launched a Fire TV app that you can download right from the built-in app store. It offers competitive unblocking capabilities, and it should be fast enough to stream anything in HD without buffering.

Hotspot Shield emphasizes strong security to keep your online activity safe and private. It doesn’t store any logs of what you do online.

UNBLOCK AND WATCH:Hotspot Shield has everything you need in a Fire TV VPN, and it comes with a 45-day money-back guarantee.

IPVanish was the first-ever VPN we tried on Fire Stick, and it’s only gotten better since. It started out catering to Kodi users, and they’ll be happy to know IPVanish still works with any Kodi addon. It now unblocks quite a few streaming services as well, including Netflix. Speeds are sufficient for HD video without buffering.

IPVanish uses top-notch security and keeps no logs of your online activity. Its servers are in more than 75 countries.

Up to 10 simultaneous connections are allowed. Apps are also available for Windows, MacOS, iOS, and Android.

Surfshark makes an easy-to-use app for Fire TV that’s available from the built-in app store. It unblocks Netflix, Amazon Fire TV, Hulu, BBC iPlayer, and more. Speeds are decent and will stream in HD without buffering.

Security is tight thanks to strong encryption and a no-logs policy. Live chat support is available on the website.

Best of all, Surfshark lets you connect an unlimited number of devices per account. That makes it a good option for a family or group of housemates. Apps are available for Windows, MacOS, iOS, and Android in addition to the Fire TV app.

WORKS WITH FIRE TV:Surfshark’s Fire TV app makes it easy to unblock streaming services from abroad. It comes with a 30-day money-back guarantee.

HMA Firestick workaround: Get HideMyAss VPN on your wifi router

If you’re committed to HideMyAss and really need it to work with your Firestick, the only option would be to set it up on a wifi router. You can then connect the Firestick to the VPN-enabled router. This should allow you to access region-locked content, use Kodi privately, and secure your connection if you use your Firestick at hotels.

FlashRouters sells home wifi routers with HMA pre-configured starting at around $250. Once it arrives, you just set it up like a normal router and enter your HMA login credentials, choose a location, and connect.

If you don’t want to fork over hundreds of dollars for a new router, you can try configuring one yourself. You have two options here: configure your existing router or set up a VPN-protected virtual router on a laptop.

Configuring HMA on a wifi router

To do this, you’ll need a router with firmware that supports VPNs. HMA lists the following compatible firmware on its support website:

If your router doesn’t have any of the above firmware installed, it’s possible to replace the existing firmware. The process of replacing firmware is called “flashing” and it should be done with caution. Failing to properly flash firmware can permanently damage your router.

Find a firmware that’s both compatible with your router model and supports VPNs. Keep in mind that all of the above firmware have various versions, not all of which will support VPNs.

Once you’ve got a router with VPN-compatible firmware, you’ll need to configure each HMA VPN server to which you want to connect. The process varies for each firmware, and HideMyAss support offers setup tutorials for most of them.

Setup takes place in the router’s administration dashboard. You can usually access the admin dashboard by connecting to the router via LAN or wifi, then opening a web browser and entering one of the following IP addresses:

Once you’ve logged into the dashboard, follow the instructions provided by HMA. You’ll typically need the following info for setup:

There will also be several other options to address per HMA’s instructions.

In many cases, you will also have to download certificates and keys for each server and add them to VPN connection profiles.

If you don’t have a router that’s compatible with VPNs or you don’t want to risk flashing new firmware onto your existing router, this is a handy alternative. It does, however, require keeping a spare laptop handy.

Most laptops made in the past few years have the ability to broadcast their own wifi hotspots to nearby devices. Here’s a general idea of how it works:

We’ve got detailed tutorials on how to set up VPN-secured wifi hotspots on both Windows PC and MacOS.

Will HMA release a Firestick app?

HideMyAss will probably release a Firestick app at some point, but until then, router setup is the only safe option. These workarounds are a bit involved, requiring both time and tech savvy. The easiest option at this point would be to switch to a VPN that already has a Firestick app, like ExpressVPN or CyberGhost.