All PCs and servers on your network emit heat but there is a limit to the amount of heat a computer can withstand before damage is done to hardware. Monitoring the temperature of your network’s hardware devices can help to make sure that they don’t overheat and increases the longevity of the infrastructure you rely on every day.

CPU temp monitors enable you to monitor CPU temperature from one location. Monitoring the temperature allows you to identify when hardware devices are overheating and gives you a chance to fix the problem before any damage is done to the device – which is vitally important for network troubleshooting.

Too much heat can cause damage to a computer and cause it to crash. Many organizations use CPU temperature hardware monitors to monitor for maximum CPU temperatures.

Here is our list of the 10 Best CPU Load & Temperature Monitor tools: 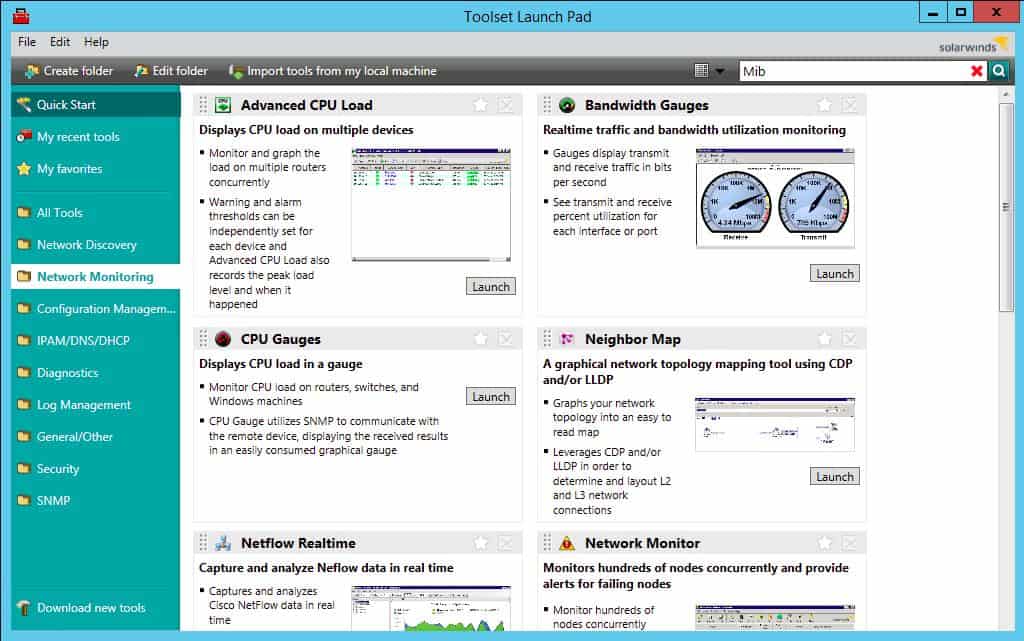 The SolarWinds CPU Load Monitor is part of the Engineer’s Toolset, which is a bundle of more than 60 monitoring and entire system management utilities. The CPU Load Monitor can track the performance of network devices and watch to make sure their hardware doesn’t get overloaded.

Network devices rarely include mechanisms to measure temperature. So, there just isn’t a temperature metric to pick up from switches or routers. However, neat is usually only generated by these devices when they get overworked and the electronic elements that will create heat when overloaded are the CPU and the interfaces. The CPU Load Monitor measures these components and tracks their activity live in the Engineer’s Toolset’s dashboard. 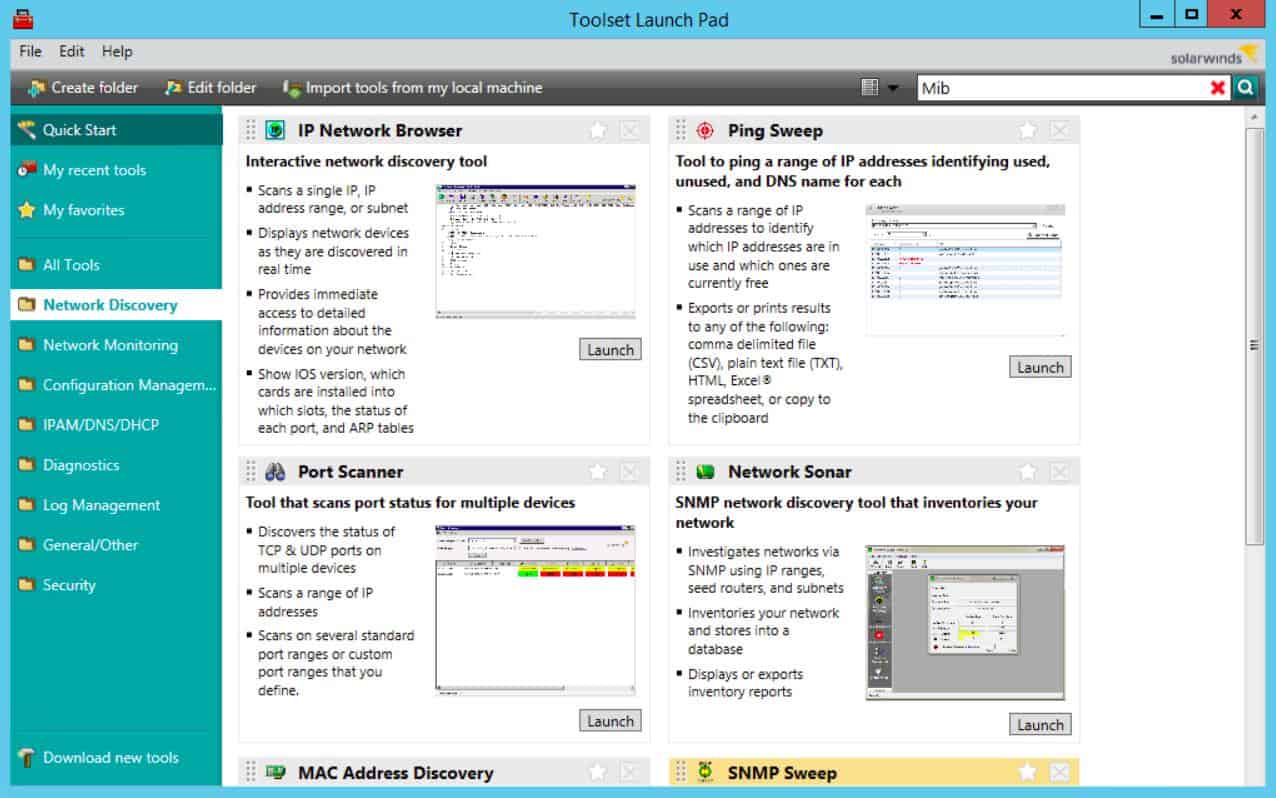 The CPU Load Monitor starts its service by searching the network for all connected devices and lists them in an inventory. Once that autodiscovery phase has been completed, each listed device will automatically be monitored and one of the tracked factors in the CPU load. The CPU load monitor also records interface statistics and memory utilization, so all of the elements inside a network device that could overheat are watched by the CPU Load Monitor.

The monitor automatically sets threshold levels on all of the performance statuses that it tracks. These can be adjusted manually. When a threshold is crossed, the CPU Load Monitor generates an alert. This alert is shown on the dashboard and is also sent out to key personnel as an email or SMS message. This facility means that technicians don’t have to sit watching the panel always for signs of overheating. The threshold levels should be set so that the warning gives staff enough time to take preventative measures before any physical damage or performance impairment occurs.

The Engineer’s Toolset, including the CPU Load Monitor, is available from SolarWinds on a 14-day free trial.

The CPU Load Monitor is part of the Engineer’s Toolset, a one-stop-shop for all network troubleshooting needs. You can monitor multiple routers concurrently and set warnings and alarm thresholds with ease. One of the best options available today..

Atera is a cloud-based platform that includes all of the software that a managed service provider (MSP) needs to run its business. The remote monitoring and management (RMM) module of the system includes monitoring screens for networks, servers, endpoints, and applications.

The home screen of the monitoring dashboard gives a system overview. Atera employs an alert-based system that notifies an administrator if there is anything wrong on the monitored system. So, it is easy to spot problems at a glance. From the summary screen, the operator can click through to see details of individual pieces of equipment.

The device, endpoint, or server monitoring screens include a range of statuses, including CPU performance data. These categories of feedback are all live and they include CPU temperature, utilization, and capacity. Other factors shown in the screen include fan performance, memory usage, disk activity, and I/O throughput rates.

Atera is a subscription service with a rate per technician per month. The cloud-based dashboard is accessed through any standard browser, so you don’t need to host the Atera software on premises. You can get 30-day free trial to experience the platform for yourself. 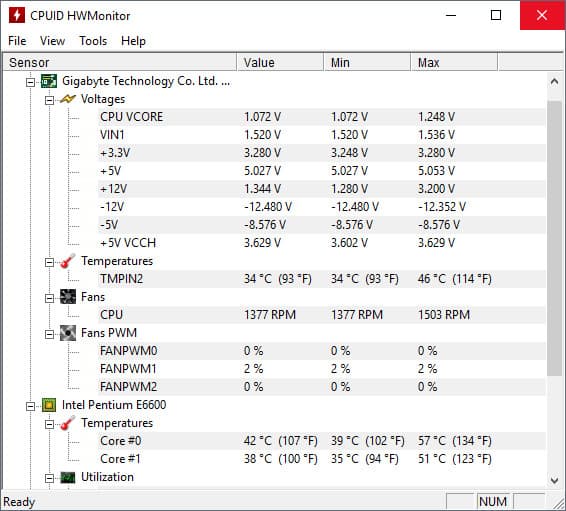 HWMonitor is a hardware monitoring tool for Windows that monitors computer temperatures, voltages, and fans. The software monitors the hard drive and video card GPU temperature. These metrics give you a strong indication of the overall health of a device.

When using the PRO version you can monitor multiple PCs in a list view. Next to each device you can view the Value, Min, and Max temperatures of hardware components. The list perspective makes it easier to monitor multiple devices at once. You can download the program for free.

Open Hardware Monitor is an open-source hardware monitoring solution that monitors the temperature, fan speed, load, voltage, and clock speed of computers. The tool supports common hardware chips meaning it can be deployed in a range of environments. The user interface displays the data pulled from temperature sensors in a list format – making it easy to find mission-critical devices and maintain them. 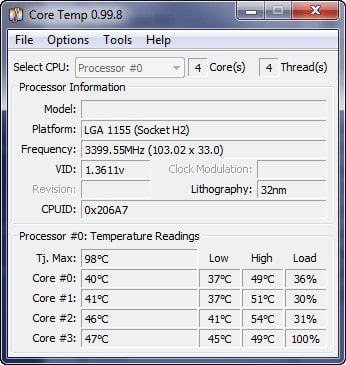 Core Temp is a temperature monitoring tool that can monitor Intel processors, AMD, and VIAprocessors in real-time. The program uses data taken from the Digital Thermal Sensor(DTS) of each processing core. The software collects the data and then displays it on the screen so the user can take an accurate temperature reading.

There are multiple add-ons available for Core Temp so the user can add additional capabilities. For example, the Core Temp Monitor app allows users to monitor devices on Windows and Android phones. The Core Temp Grapher plug-in creates a visual display that creates a graph for each processor core showing load percentage and core temperature.

Core Temp is available for Windows XP, Vista, 7, 8,10, 2003 Server, 2008 Server, 2012 Server, and 2016 Server. For commercial use, you have to purchase a commercial license. You can request a quote from the company directly. Download Core Temp for free. 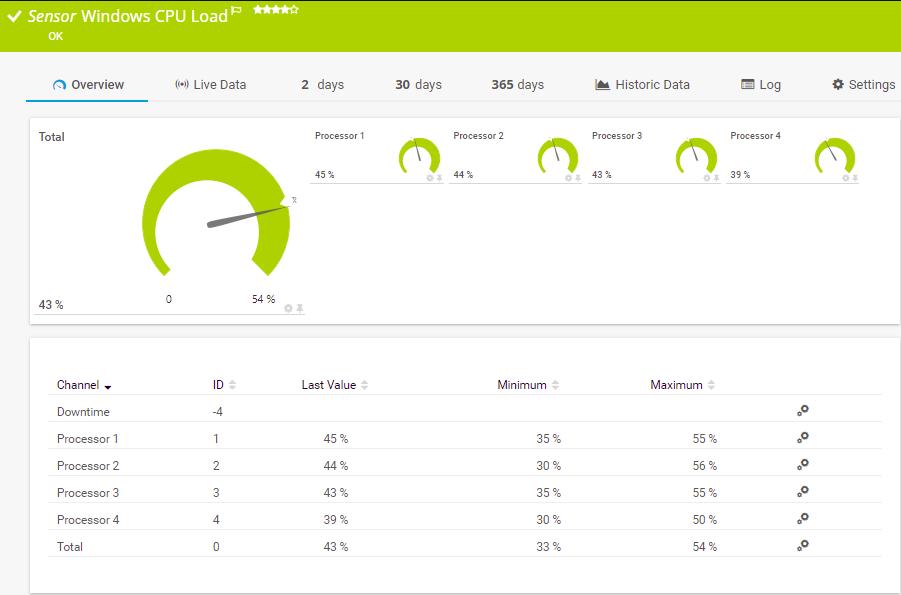 Paessler PRTG is an all-in-one infrastructure monitor that covers networks, servers, and applications. When looking for a temperature monitor, there are several different systems that you could choose. The PRTG service is a bundle of sensors and every customer gets shipped the full set. When starting up the software, the systems device manager has to decide which sensors to turn on and so is able to tailor the system to adjust the necessary monitors.

The PRTG package of sensors includes several monitors that can pick up temperature information either from servers or network devices. Temperature performance is one of the factors that can be reported through SNMP and PRTG has a sensor for that. However, not every hardware provider implements procedures to report on temperature by that method. 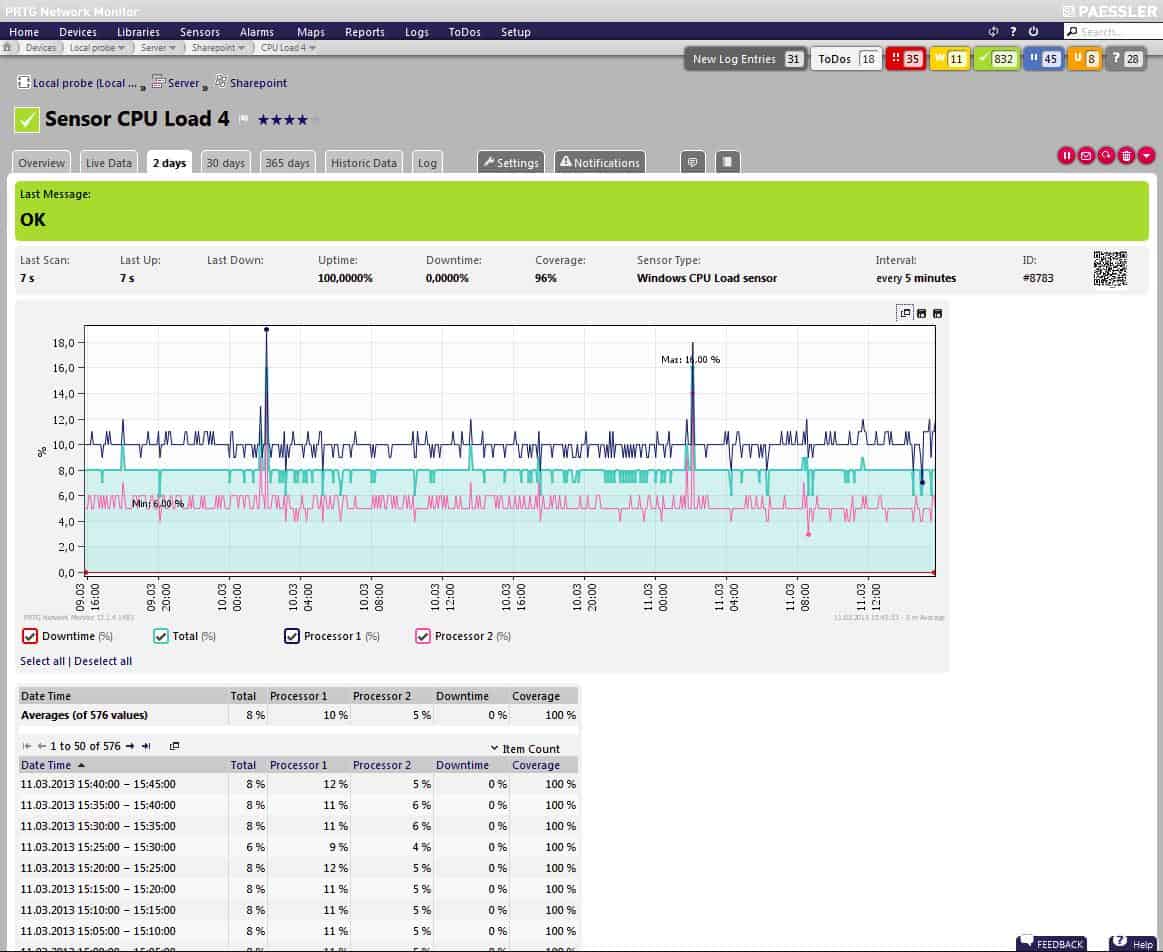 PRTG includes monitors that pick up CPU performance data on Windows servers through WMI. A sensor for Linux servers also monitors CPU performance managed by that operating system. PRTG has a total of nine different sensors that are capable of looking for temperature information gathered on servers and network devices. If none of your equipment has an actual thermometer inside, there is no way for any system monitor to collect temperature information. However, in those cases, monitoring CPU load on all devices acts as a proxy statistic for temperature statuses.

Paessler makes PRTG available on a 30-day free trial. This is the full version of the monitoring system and you can activate all of the sensors you want during the trial period 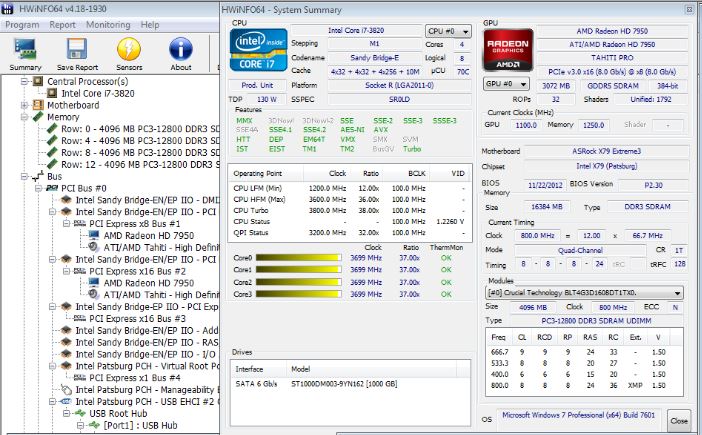 HWiNFO is a real-time system and temperature monitoring solution for Windows. With HWiNFO you can monitor hardware elements like CPUs, GPUs, drives, mainboards, and more to discover performance issues. The user interface is easy to navigate and you can view in-depth performance data by clicking through the infrastructure hierarchy.

Customizable alerts help to keep track of overheating and performance degradation. There are also add-ons you can use to augment the monitoring experience. For instance, the HWiNFOMonitor plugin adds a customizable sidebar which displays CPU performance with bars and graphs.

HWiNFO is ideal for enterprises that require a free CPU monitoring solution. The tool is available HWiNFO32 for Windows 32-bit and HWiNFO64 for Windows 64-bit. You can download the program for free. 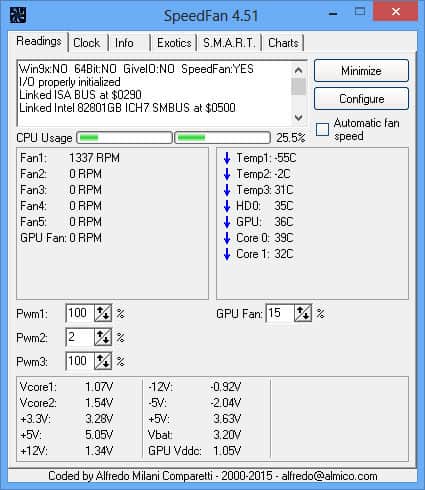 SpeedFan is a hardware monitor that monitors temperature, fan speed, voltage, and hard disk temperatures. The software can also display S.M.A.R.T data from hard disks. With SpeedFan you can configure the program to change fan speeds remotely according to the system temperatures. For example, you can choose a minimum and maximum fan speed.

The user interface is simple to use, and the platform automatically detects temperature sensors so you don’t need to waste time creating extensive configurations. However, if you want to engage with more complex configurations you can do so on the Advanced page. Here you can offset inaccurate temperature readings and control fan speed. 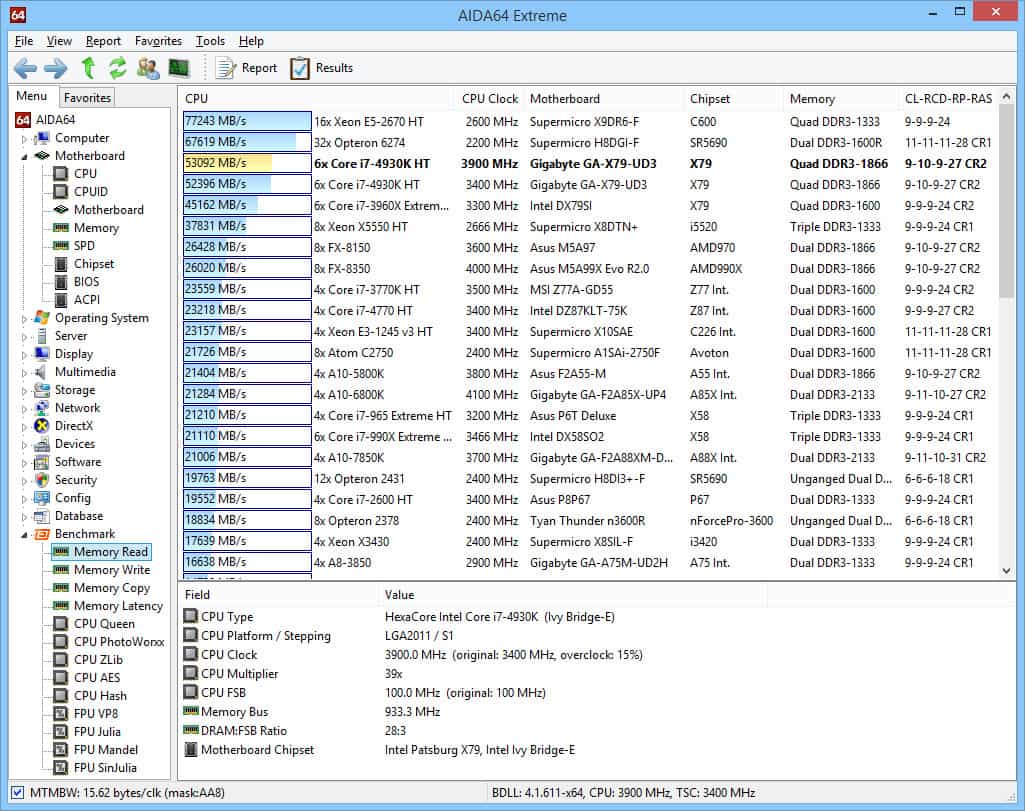 AIDA64 Extreme is a device monitor that monitors temperature, voltage, fan speeds, and power. AIDA64 supports over 250 different types of sensors meaning it works with most IT assets. The user interface is simple with a SensorPanel where you can build a custom panel to monitor temperature data and other information.

One feature that is particularly useful for enterprise users is external display support. You can view hardware data on over 50 external LCD/VFD screens, including smartphones and tablets. Display support makes sure that you can see all of the information that you need.

AIDA64 Extreme is available for all 32-bit and 64-bit versions of Windows. The tool is useful for users who want a low maintenance temperature monitor. You can purchase AIDA64 Extreme for home users from $39.95 (£30.87) for three PCs. You can download the 30-day free trial. 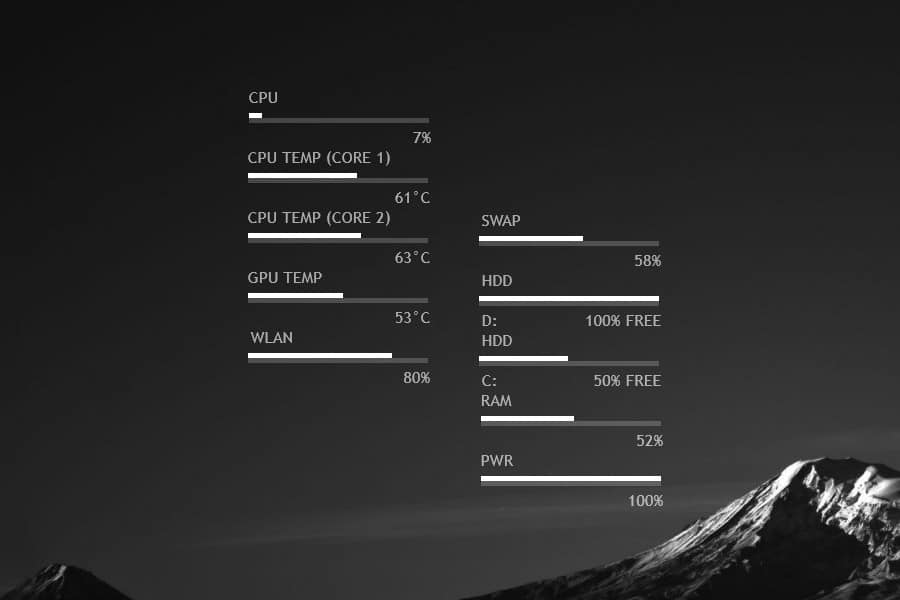 Rainmeter is a free, open-source CPU temp monitor for Windows. Rainmeter can monitor data on temperature, CPU, RAM, disk usage, and more. There is a range of skins that make this possible. Skins are essentially small tools that you can customize the layout of. The user can create monitoring skins, use one of the starter packs or install a plugin.

For example, the CoreTemp plugin allows the user to pull information from the CoreTemp application. The advantage of doing this is that you can use skins to control how you see information on the screen.

Skins are drag-and-drop so you can create a custom monitoring panel for better visibility. You can also use one of the starter skins so you don’t have to create any if you don’t want to.

If you’re looking for a customizable tool that’s accessible for non-technical users then Rainmeter is an excellent choice. Rainmeter is available from Windows 7 to Windows 10. It’s available as a free download.

How do I see CPU temp on my desktop?

There isn’t a CPU temperature monitor in your operating system. In order to get information about CPU temperature, you would have to go down to the BIOS. It is much easier to install a monitoring tool. We recommend the SolarWinds CPU Load Monitor to check on heat-generating activities or the HWMonitor, which interprets BIOS data in a GUI interface.

Why is my CPU temperature 70 degrees on an idle laptop?

A CPU temperature of 70 degrees Celsius is normal when the computer is very active. However, when idle, the CPU’s temperature should be around 45 degrees. A high temperature implies that the CPU is not really idle, but has a heavy workload put on it by background tasks and services. If the CPU monitor shows that this is not the case, then the high temperature could be a sign of a broken fan.

How do I check my CPU usage?

In Windows, CPU usage is displayed as a live metric in the Task Manager.

How do I monitor my GPU temperature?

If you have a graphics processing unit in your computer, you can see its temperature in the Task Manager of Windows 10.

What CPU temperature is too high?

What is a normal CPU temperature at full load?