Network traffic analysis can help you improve network performance through capacity planning and traffic shaping measures. It is also used for security measures. We show you the best NTA tools for 2020.
Stephen Cooper

What to look for in a network traffic analysis tool

At the simpler end of the market, you will find packet sniffers that copy passing traffic into files. That information then needs to be processed to gain meaningful insights into traffic patterns. At the other end of the scale, you will find complex systems that sample traffic from several points of the network simultaneously. They can also consolidate that source material to discover unusual user behavior.

Although the network offers live source data, network traffic analysis tools rarely operate in real-time. Packet headers are the main source of information for analysis, but traffic analyzers wait until a series of packets have been captured and stored. So, NTAs can be said to operate at the Application Layer and not the Network Layer.

Analyzing at the Application Layer gives the NTA tool a better overview of network activity. The information available at the Network Layer is insufficient to spot overall traffic patterns and it misses malicious traffic that is intentionally spread across numerous packets or combines actions from different sources.

Network traffic analysis can give rapid feedback, but at its fastest, it is only “nearly live.” Security applications can’t detect threats until they have streams of data to work on. With capacity analysis, there is less urgency – the accuracy of projections is more important than immediacy.

The NTA utility that will interest you the most depends on the reason you need to analyze your network. The descriptions of each tool in the following sections should help you to decide. 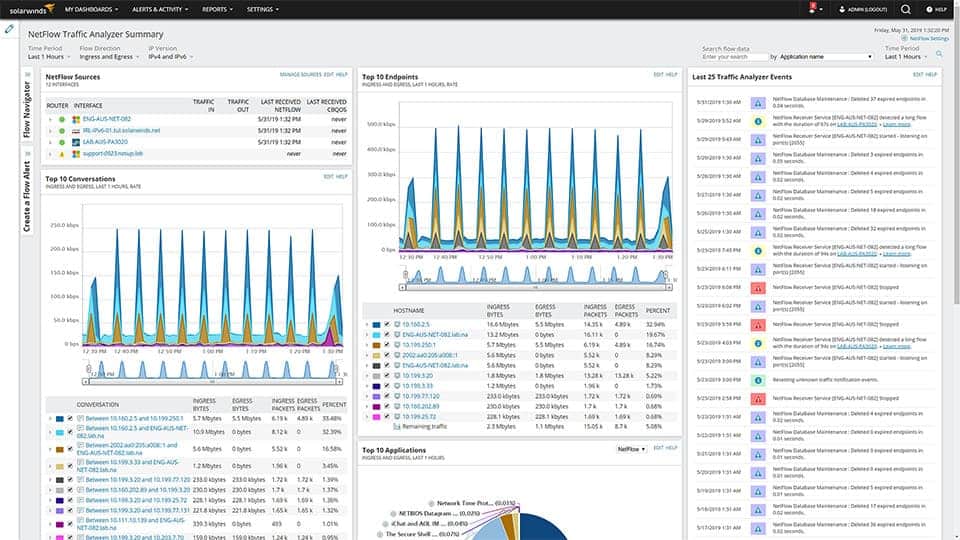 The SolarWinds NetFlow Traffic Analyzer is available as a standalone monitor or as part of the Network Bandwidth Analyzer Pack, which also includes the Network Performance Monitor. The NetFlow Traffic Analyzer uses the packet analysis utilities built into network equipment to get packet samples and throughput metrics. These systems include Cisco NetFlow, J-Flow from Juniper Networks and Huawei’s NetStream, plus the sFlow and IPFIX systems. The tool also interprets NBAR2 data from Cisco devices.

It is possible to watch this collected data live on the screen. However, the real analysis only takes place on stored data. The utility is able to identify VLANs, such as simultaneous voice traffic on the network. Live data features include throughput thresholds that will alert you if traffic starts to push to the limit of the network’s capacity.

The data analysis screens will show the top traffic generating applications and it can also segment data by source and protocol/port. Time-based charts display the peaks and troughs in traffic volumes over hours, days, or months. This will enable you to assess the times of peak demand so that you can shift batch jobs and downloads to less critical hours.

Both the Network Performance Monitor and the NetFlow Traffic Analyzer will cover LANs, wireless networks, WANs and connections to Cloud services. Both of these tools install on Windows Server and they are written on a common platform, so they can interact. This data exchange enables a number of common modules, including PerfStack, which shows the underlying resources supporting each application and their live statuses. You can get a 30-day free trial of the NetFlow Traffic Analyzer.

Great for capturing continuous streams of network traffic data and presenting raw numbers into easy-to-read charts and tables. Gives a quality bird’s-eye-view of how much traffic is on the network and the applications that are being used on it. 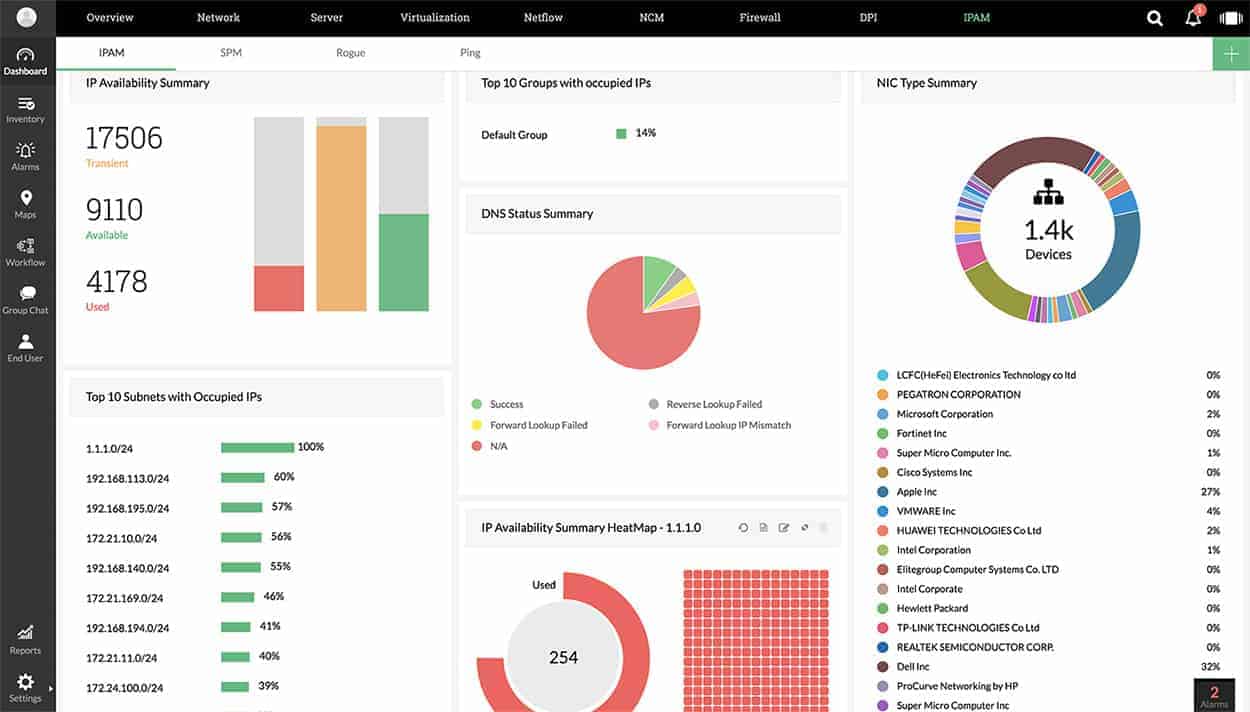 ManageEngine OpManager Plus includes just about all of the monitoring capabilities that you need to run your IT infrastructure. This includes network device health monitoring and traffic flow analysis utilities.

OpManager Plus starts its service life by scanning the network and creating a topology map and device inventory. That gives you an overview of your network and then you can work on testing the traffic on each link or end to end between two nodes on the network. Whenever you change the layout of the network by moving, adding, or removing equipment, the topology map and inventory will update automatically. The map shows the status of each device and the load on each link.

The traffic flow capture system in the monitor can communicate with network devices through NetFlow, IPFIX, J-Flow, NetStream, sFlow, and AppFlow. Metrics on network traffic are displayed live on the screen. However, the packets captured by the system are stored in files for analysis.

The day-to-day traffic monitoring system allows you to set threshold alerts that warn of possible resource exhaustion. These alerts can be sent to you by email or SMS so you don’t have to attend the monitoring screens constantly.

The analysis screens of the system help you to explore the sources of traffic by application, IP address, or interface – it implements NBAR. The tool includes forecasting assistance so that you can perform capacity planning. The system also includes traffic shaping tools, such as queuing and prioritization with Class-Based QoS to help you squeeze extra value out of your network infrastructure.

OpManager Plus can monitor wireless networks as well as standard LANs. It can cover internet links between sites if you run a WAN and it is also able to integrate links to Cloud servers. 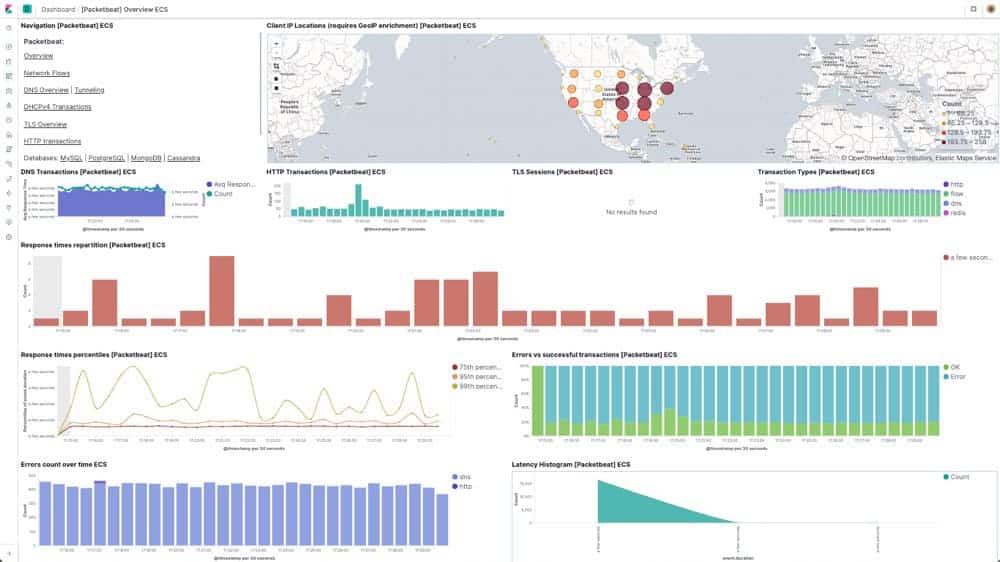 Netherlands-based Elasticsearch B.V. has hit on a very successful niche market with Elastic Stack. Many software buyers feel restricted by the all-inclusive packages of monitoring and analysis systems and would prefer to select the best-of-breed for each network analysis function. Elastic Stack works together in order to capture packets, analyze them, and display the results but each element can be deployed separately and used in concert with tools from other providers.

The business started up with its Elasticsearch product and still carries that name for the company. This tool searches through logs and stored packet streams. It then derives statistics from those searches. You use this search engine as an analytical tool.

Kibana is the frontend of Elastic Stack. This is the star of the stable and is widely recommended by many other network analysis tools. There are many open-source network traffic analysis tools out on the market that have been developed by geniuses that just can’t be bothered with a presentation. These very good systems skip the trouble of creating a dashboard and just tell their users to install Kibana instead.

Kibana was built to interact with many backend data gathering and interpolation systems, such as OSSEC. However, it was specifically written to work with Elasticsearch. The tool has very attractive data visualizations and the screens can be customized. The interoperability with Elasticsearch means that the queries you perform in Kibana get implemented by Elasticsearch, with the results returned to the Kibana data interpretation system.

Logstash is the lowest layer of Elastic Stack. This is a log server and can create storage files for a wide range of data. For traffic analysis, you could use a free pcap tool to feed into the stack via Logstash.

The Elastic Stack programs are free to use and they are available for Windows, Linux, and macOS. Elastic Stack is also available in a supported version for a fee. There is a Cloud-based service for Elastic Stack, called Elastic Cloud. 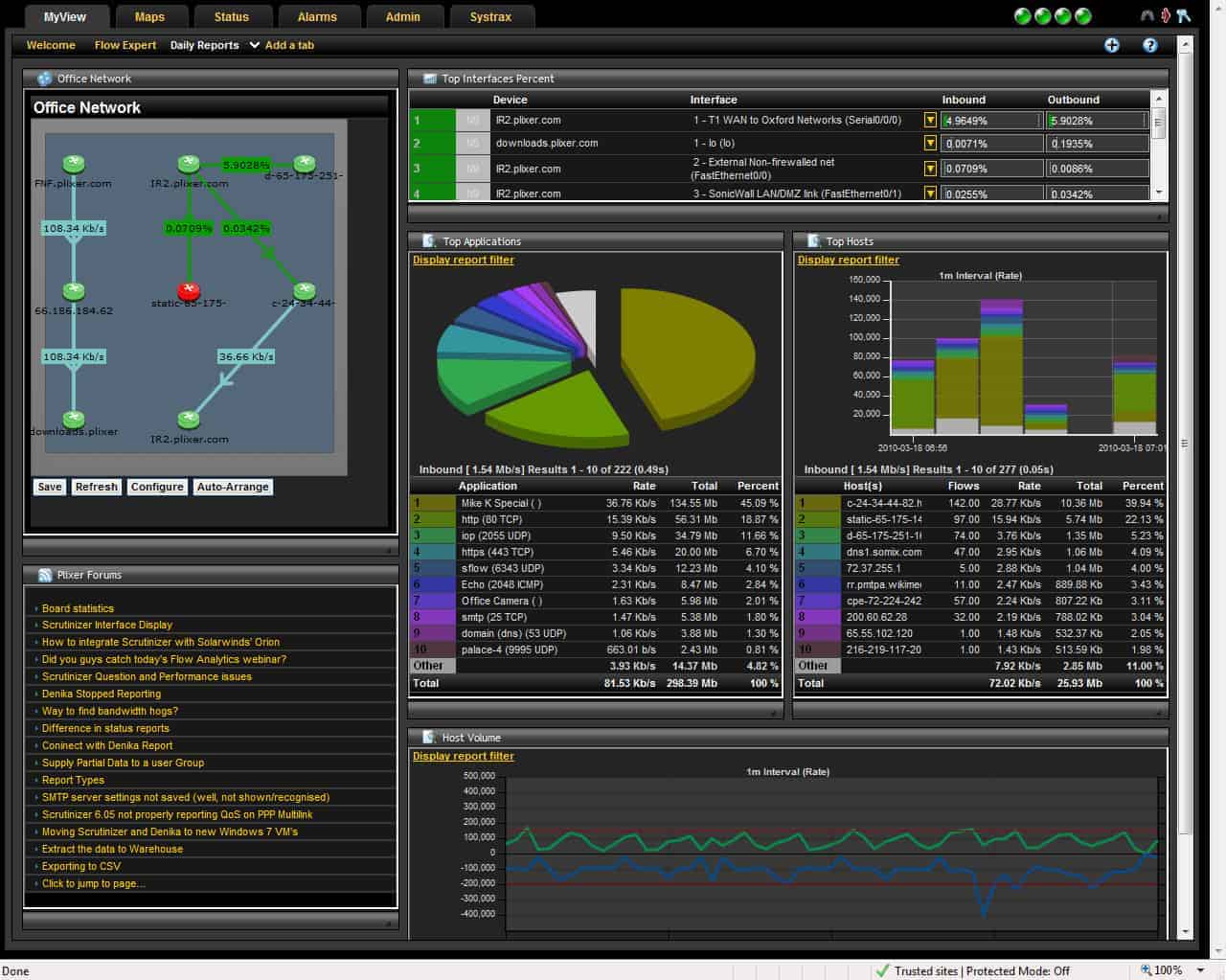 Plixer Scrutinizer is a stand-alone traffic analyzer that is available as an appliance, as a virtual appliance, or as a Cloud service. The focus of this tool is to identify security threats and its full name is the Scrutinizer Incident Response System.

Scrutinizer gathers packets and metrics with NetFlow, IPFIX, NetStream, J-Flow, and sFlow. The system communicates with switches, routers, firewalls, servers, and wireless access points. Data collection occurs simultaneously at many points on the network. All of the passing data is shown in live graphs as it occurs, but it is also stored for security analysis. The multiple viewpoints can be useful for traffic analysis as well as for security processes because they show up bottlenecks in the system.

All of that data gathering produces very large volumes of information – up to 10 million flows per second. However, the Scrutinizer interpolation engine is built to handle that much volume. Although the system is intended to work with stored data, it operates on a sliding window and gets started including new data as soon as it comes in. This gives it a “near live” capability that is able to spot security breaches almost immediately. You don’t have to wait to find out a couple of days later that there has been a serious problem. Incidences appear as override alerts in the system performance monitoring screens.

Scrutinizer is marketed on a subscription model with three service levels: Free, SSVR, and SCR. As you would expect, the free version has data throughput caps volume limits and fewer utilities than the paid editions.

Paid plans allow you to schedule data collection and reporting. The paid plans can be accessed for free on a 30-day trial.

Open WIPS-NG is an intrusion prevention system for wireless networks. This is a free tool that includes intrusion detection and automated responses. The tool is a sister product to Aircrack-NG, which is well known as a hacker utility.

The traffic analyzer includes three elements: a sensor, a data processor, and an interface. The sensor is a two-way communication channel, so it acts as an implementor of mitigation strategies when any malicious activity is spotted.

The sensor is a wireless packet sniffer. It collects packets constantly and sends them to a file. The file is a source for the server program, which implements detection rules, looking for signs of intrusion. The results of security checks are displayed in the interface.

Remediation can be implemented automatically. If an intruder is spotted, the server program sends a command to the wireless AP via the sensor to kick that user off the network.

Open WIPS-NG is an open-source project. The software can only be run on Linux.

As this report makes clear, there are two main reasons to conduct network traffic analysis: network performance enhancement and security checks. This guide aimed to rate the best in both of these worlds. If you have a favorite network traffic analysis tool that isn’t on this list, leave a message in the Comments section below and share your experience with the community.