Testing for Packet Loss on Windows 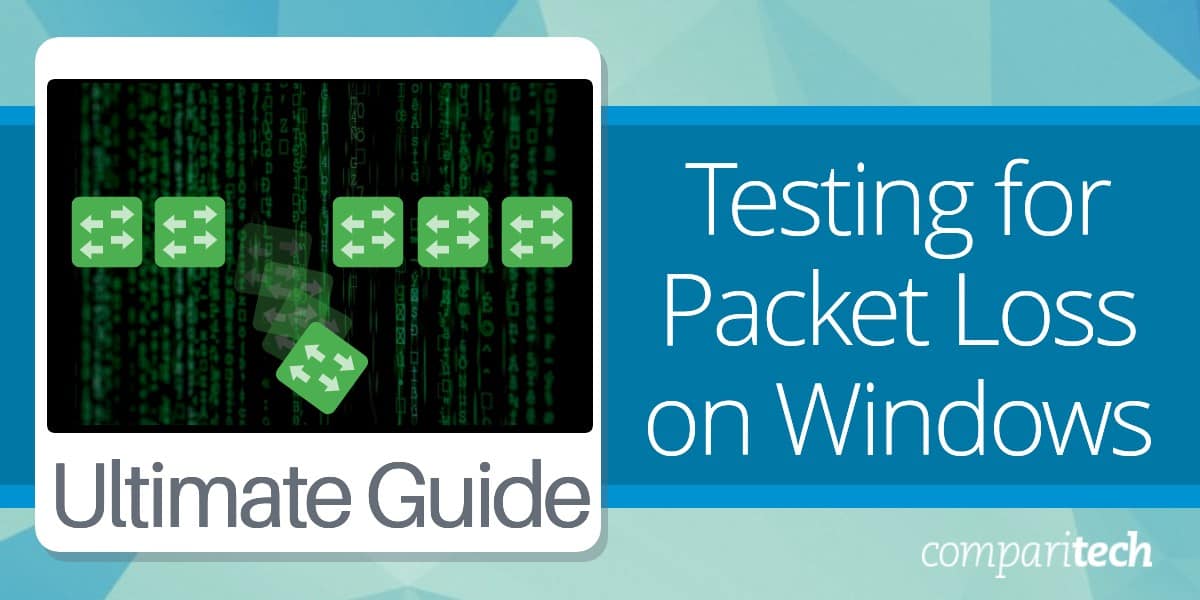 Packet loss can occur in transmissions over a network and also across the internet. Depending on whether session controls are used on the connection, packet loss causes retransmission, which results in a higher transmission completion time or it results in missing data. Re-transmission of lost packets causes extra network traffic. It is inefficient, costly, and loses time.

For any standard application, slow response times can be annoying and the loss of the occasional packet increases traffic volumes slightly. However, for interactive applications, such as VoIP, video streaming, and video conferencing, packet loss can be ruinous. These applications generate large volumes of traffic even if packets are delivered successfully. Retransmission makes matters worse.

In the case of VoIP and video conferencing, packet loss does not trigger re-transmission because there isn’t time to hold up the delivery of data to the user interface, waiting for that missing piece. Fortunately, each packet represents such a small slice of a voice or video stream that one packet’s payload would not be noticeable if missed out on the delivered presentation. However, a series of lost packets or frequent, intermittent packet loss, will impair the quality of sound or video. The sound or video will have irregularities in it or it will hang or jump.

Video streaming services deal with packet loss differently. They don’t have such pressure to be as real-time as interactive applications that carry live communications between two or more people. Video streaming relies on buffering.

The video playback application will store up several minutes of footage before it starts playing the video. The amount of video time that it stores in its buffer is calculated on the detected bit rate of the connection with a percentage added on for expected packet loss. In some cases, video applications can negotiate a lower quality of the video to compensate for a slower connection. However, if the packet loss rate on the connection is higher than expected, the buffered video will run down. If there is no video left in the buffer, the video player will have to pause until sufficient video time has been received.

So, packet loss causes interactive applications to have poor quality and it causes video streaming to buffer and pause.

There are two strategies for managing the transmission of data across a network and these are both Transport Layer protocols. The first of these is the Transmission Control Protocol (TCP), which is a “connection-oriented” system. TCP includes procedures for checking that packets arrive and then request a replacement for a lost packet. The other system is the User Datagram Protocol (UDP). This does not establish a session and so it is called “connectionless.” UDP has no way to enable receivers to request retransmission.

TCP is great, but it creates a lot of overhead. Interactive applications can’t afford the time a session adds on, so those systems tend to be based on UDP. They either implement transmission control up in the application or they just don’t bother with it.

These two approaches to transmissions and the choice of the application developer over whether to use TCP or UDP explain why packet loss creates extra traffic in some cases but not in others. So, in some cases, it causes a poor quality of service and in others, it creates a slow service. In all cases, packet loss is a bad thing.

If you are running a business network that is expected to carry a lot of voice and video traffic, you need to be sure that your cable and network devices have enough capacity to carry all of the traffic that user demand will generate.

Packet loss can’t be completely eliminated, so it is normal to calculate extra capacity requirements to take account of that occurrence. Remember, you won’t get any re-transmission of VoIP and video conferencing traffic, but there will be extra traffic volumes for video streaming applications due to packet loss.

It is better to detect a packet loss rate on your network and on transmission from particular sources before you put a new multi-media application live for the users to access. Thus, trial an application before releasing it.

There are a number of network management systems that include utilities to identify packet loss. Some of these system monitors will even give you an alert when they detect a larger than expected packet loss rate. In these cases, you can leave the tool to get on with constantly watching network performance, freeing up your time for other tasks.

All of these monitoring systems base their detection of packet loss on methods that are built into the operating system on which they run. Those detection systems can be accessed directly by the user. So, whether or not you have a network monitoring tool, you can get to see the packet loss data that those monitors use for their system investigations.

The utilities that you need in order to investigate packet loss are all part of the operating system that lies beneath the Windows interface. You need to open a Command Prompt window to access them. 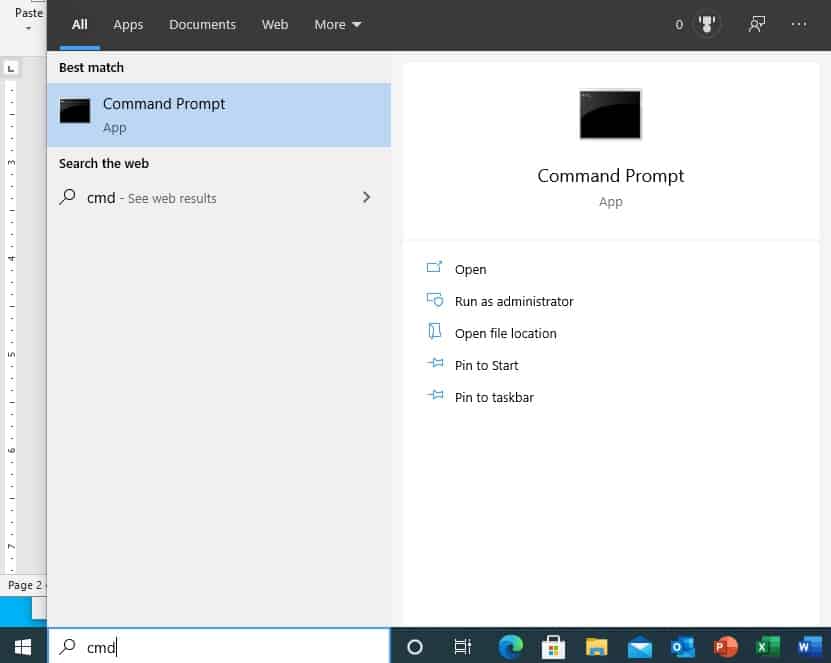 This opens a Command Prompt window that gives you direct access to the operating system.

Identifying packet loss on the network

You need to know the address of the Default Gateway on your network. This applies both to wired and wireless networks.

The test that we will use checks out both directions of traffic – from your computer to the gateway and back again.  As it covers both there and back, you can be sure that you have tested the conditions experienced by outgoing and inbound packets.

Enter ipconfig in the Command Prompt window to get information on your local network. 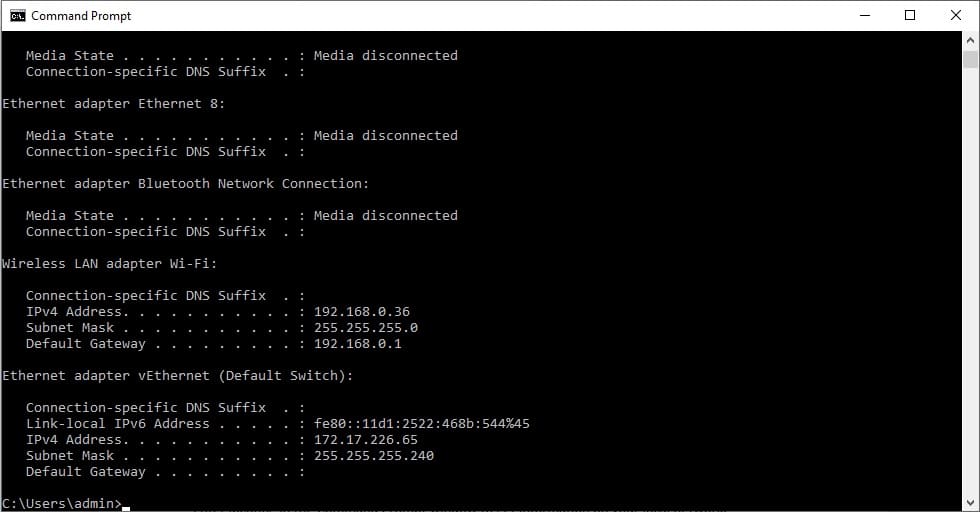 You need to look for a value for Default Gateway. In the example shown above, that address is 192.168.0.1. This is a typical IP address for the default gateway on a private network.

Ping makes several tests and summarizes the results. In the example above, you can see that there was no packet loss. On Windows, Ping executes four test runs. That doesn’t give much opportunity to spot a problem because usually, packet loss is a lot less than 25 percent. Make Ping run 100 tests by adding -n 100 at the end of the command, such as Ping 192.168.0.1 -n 100. 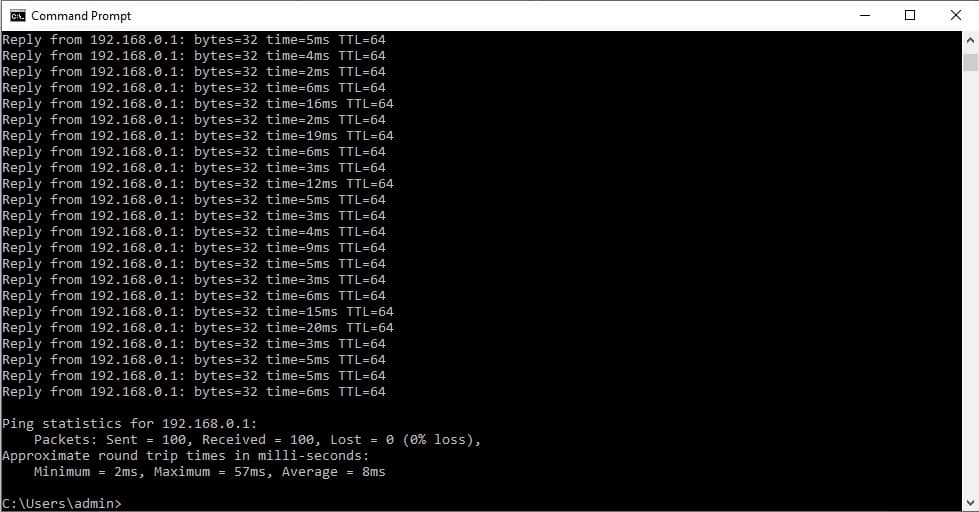 The example run of 100 tests above shows that there was still no packet loss encountered on the network. This is good because it shows that the network is able to cope with its current throughput demand. However, this situation could change once the new application goes live and lots of users generate a lot more pressure on the network’s capacity.

One of the main causes of packet loss in a network is the overloading of switches and routers. If packets arrive at a switch at a faster rate than that device can handle, the switch initially buffers the incoming packets. Once that queue is full, new packets arriving cannot go anywhere else and so packets will be lost until the switch empties out some room in the buffer.

Identifying packet loss on the internet

Even if your network is working just fine, your users still might experience problems with interactive applications and video streaming services. This could be because of problems with the internet connection.

The command to check on the connection packet loss rate is exactly the same: Ping. However, this time, you need to put in the address of an expected source of data. You don’t need to know the IP address because Ping will implement DNS resolution if it is given a URL. So, here is an example of 100 tests sent to the server for Google, launched with the command Ping google.com -n 100. 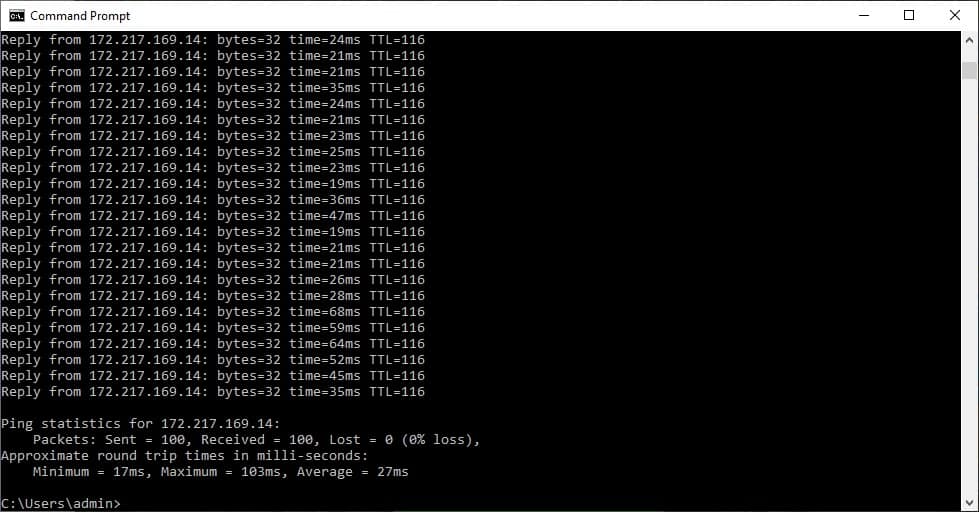 In this case, there was no packet loss.

If you experience packet loss on the network, the most likely cause is an overwhelmed switch or router. Try a Ping to different endpoints on your network that will pass through different network devices so that you can see exactly which device is in trouble.

Once you identify the device that is overloaded, you can help the situation without needing to replace either the device or the cables that connect to it. This is by a method called traffic shaping.

Traffic shaping algorithms involve identifying the packets that relate to different applications and then slowing some application traffic to give priority to other traffic at each switch. This is a queuing strategy that will always hold up the traffic of some applications, placing them in a queue, to enable the prioritized traffic direct access to the switch.

It might seem that there is nothing you can do about packet loss on the internet because you have no control over that domain. However, your traffic might be throttled by your Internet service provider (ISP). In this scenario, the ISP slows down or drops packets for certain applications and video streaming is a particularly big target for some ISPs.

Throttling is very difficult to detect or prove. As it targets video traffic, the tests you run with Ping won’t show up the type of treatment that your video traffic receives.

Another reason could be that your network gateway router doesn’t have the capacity for all of the traffic that it is expected to process. In this case, you could implement queuing on the router, or upgrade to a device with greater capacity.

Ping shows more than just packet loss data. In the examples shown above, you can see that the Ping summary shows the minimum, maximum, and average roundtrip time for all of the packets in the test run batch.

The variation in packet delivery time is called jitter and it is a bad condition for interactive applications. As VoIP and video conferencing don’t use any session control or buffering, they need packets to arrive in order and at a regular speed. They don’t have time to re-sequence arriving packets, so if the following packet travels faster and arrives before the packet that was sent in front of it, the VoIP application won’t check but will play those data segments in the order they arrived – resulting in quirky sounds.

As with packet loss, a small amount of jitter shouldn’t create detectable problems with the sound or video quality because each tiny slice of the stream is hardly noticeable. A brief period of jitter or just a small range of transmission times won’t have much impact on service quality.