How to watch Archer season 11 online from anywhere 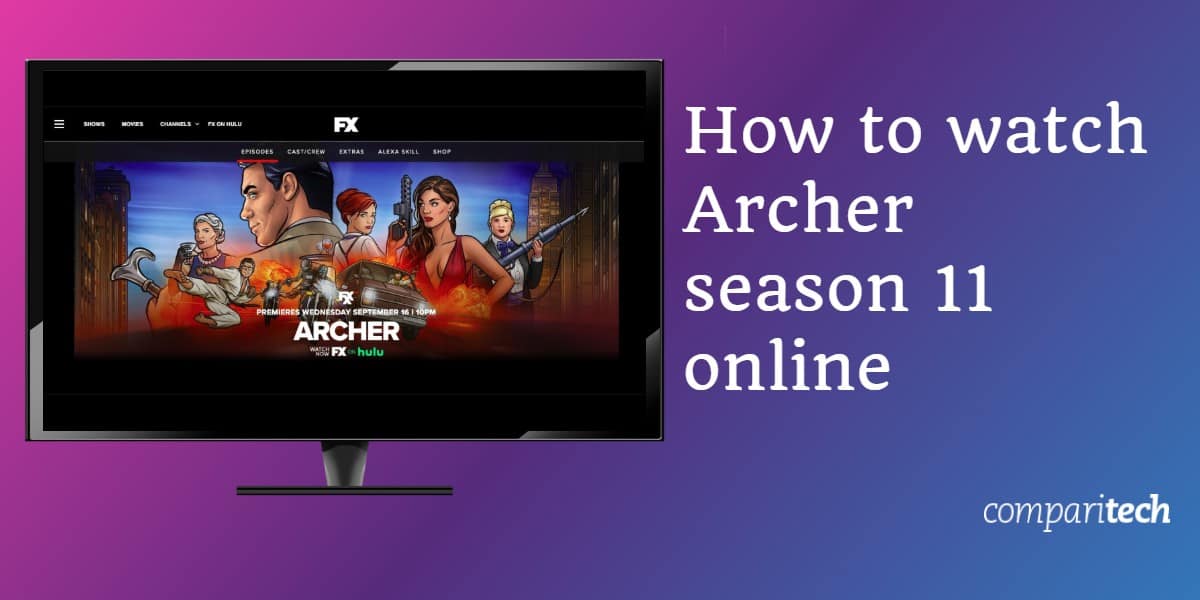 Archer season 11 will premiere on Sunday, September 16, at 10 PM EST (7 PM PST) and will be made up of eight episodes. Originally scheduled to premiere in May 2020, the animated comedy series was delayed due to the COVID-19 pandemic. It’s worth knowing that Archer season 11 will initially only be available in the US. However, by connecting to a Virtual Private Network (VPN), you can watch it abroad (outside the US).

Please note that we’ll only be recommending official sources for watching Archer season 11. We don’t recommend the use of unlicensed streams because they run the risk of being taken offline for copyright violation. What’s more, unofficial sources are usually low resolution and plagued with performance issues including buffering and lag. We’ll show you how to watch Archer season 11 online from abroad via the highest quality official sources.

Archer season 11 will only be shown on region-locked platforms. To continue watching abroad via your regular home streaming services, you’ll need a VPN.

How to watch Archer season 11 online with a VPN

To watch Archer season 11 online from abroad, you’ll need to connect to a VPN server in the US. In doing so, you’ll be provided with a US IP address. This tricks websites and services into thinking you’re located in the US. As such, you’ll be able to unblock geo-restricted TV shows such as Archer season 11 from anywhere.

Here’s how you can live stream Archer season 11 abroad using a VPN:

Archer season 11 will air live on FXX. It’s for this reason that we recommend you test your VPN with FXX in advance of the season 11 premiere. That way, you’ll have time to contact your VPN’s customer support for further guidance should you encounter any issues.

How to watch Archer season 11 on US TV

You can watch the Archer season 11 premiere on FXX on Sunday, September 16. To watch online, simply go to the FX Networks website or access the FXNow app. Note that in order to stream directly on FXX, you’ll need to sign in with a supported TV provider. This requires you to enter the same login details you use with your cable TV subscription (an email address or username and password).

Whether you’re trying to stream Archer season 11 on FX Networks, FXNow, or one of the above streaming services, you’ll need a VPN to watch from abroad. That’s because content on these platforms is geo-blocked. By connecting to a VPN server in the US for a US IP address, you can watch it online from anywhere. ExpressVPN includes a 30-day money-back guarantee which means you can try it out risk-free.

Where else can I watch Archer?

The only way to watch Archer season 11, at least for the time being, is on FXX (be it direct or via a streaming service). However, there are a number of options when it comes to previous seasons of Archer. For example, Archer seasons 1–10 are available on various versions of Netflix including Netflix UK. Plans start from £5.99 a month although it’s worth noting that it’s no longer possible to get a 30-day free trial with this particular version of Netflix.

Another option is purchasing individual episodes or seasons on Amazon Prime Video. Episodes are priced at $1.99 USD (SD) or $2.99 (HD) each while an entire season costs $11.99 (SD) or $17.99 (HD). Much like FXX, you’ll need to connect to a VPN to access Netflix or Amazon Prime Video from certain countries. In the case of Netflix UK, all you need to do is connect to a server in the UK and you’ll receive a UK IP address so you can watch abroad.

What can we expect from Archer season 11?

Archer season 11 will consist of eight episodes, each with a run time of around 22 minutes. The first episode is titled “The Orpheus Gambit”. At the end of season 7, Archer was shot in the back and fell into a coma. This allowed the show to explore new storylines which included the characters being sent back to the 1940s. However, as we can see from the season 11 trailer, Archer is finally awake and the espionage agency has reopened. Archer must adjust to the many changes that have taken place in his absence.

Which cast members are returning for Archer season 11?

We can expect all of the main cast to be back for season 11. This includes H. Jon Benjamin as Sterling Archer, Judy Greer as Cheyl Tunt, Amber Nash as Pam Poovey, Chris Parnell as Cyril Figgis, Aisha Tyler as Lana Kane, and Jessica Walter as Malory Archer. However, series creator Adam Reed (Ray Gillette) is expected to be playing a reduced role in season 11, as evidenced by his absence from the season 11 trailer.