How much does your ISP spend on lobbying? 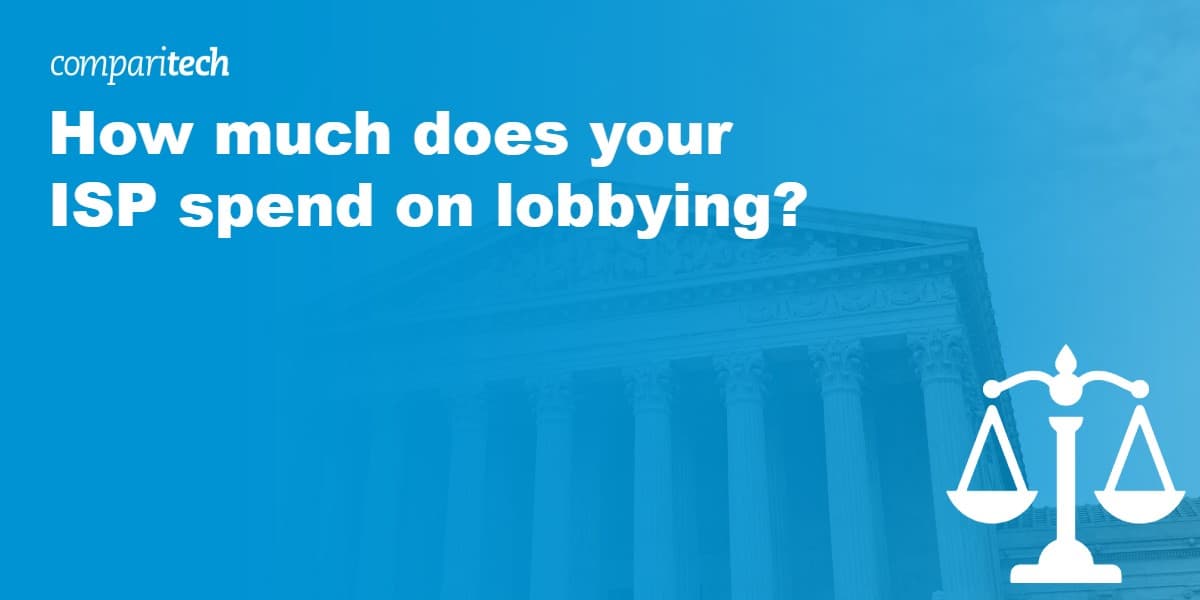 Internet service providers (ISPs) in the United States have spent almost $1.4 billion on lobbying since 1998, and 2018 was the biggest year so far with a total spend of more than $80 million.

ISPs are some of the biggest holders of personal data. As the FTC’s recent report found, many ISPs are amassing large quantities of sensitive consumer data (with some combining this with third-party data to create incredibly granular insights about users and their households), are using and gathering data in ways that consumers may not expect and may cause harm, are often illusory in their offering of consumer choices when it comes to their data, and have the ability to be as privacy-intrusive as some of the biggest advertising platforms.

With that in mind, how much is your ISP spending on lobbying?

Comparitech researchers compiled and analyzed 61 ISPs’ lobbying expenses from the US Senate’s Lobbying Disclosure Act database, which dates back to 1998.

Here are the highlights of our analysis:

What is ISP lobbying?

Lobbying expenses include any money used to influence local, state, or federal legislators and regulators. According to the IRS, that includes expenses incurred to participate or intervene in any political campaign for or against a candidate for public office. Attempts to influence the public about elections, legislative matters, and referendums also count as lobbying.

Much ado has been made about big telecom’s influence on politics, particularly when it comes to prominent issues like broadband privacy and net neutrality. Many politicians and their organizations receive campaign donations from telecoms. A separate study of contributions made in the last election cycle shows that despite big telecom giving to both sides of the aisle in the past, those contributions now almost always go to Republican candidates.

In exchange, telecoms have the ear of lawmakers and regulators at the local, state, and national levels. They lobby against smaller competitors. They lobby against online privacy laws in towns and states. They lobby the FCC for less industry regulation. They lobby financial regulators to push through mega-mergers. And lobby groups even go to court for ISPs, in some cases suing states that try to enforce their own net neutrality rules.

According to OpenSecrets.org, Telecom Services spent $1.84 billion on lobbying since 1998. That includes companies other than the 61 in our list, hence the larger number. It’s the 12th biggest industry in America when it comes to lobbying expenses.

The ISPs that spent the most on lobbying since 1998 are all household names:

These ISPs spent the most on lobbying last year:

Smaller organizations that submitted lobbying expenses, but were below the threshold, haven’t been included as the specific figures are not available.

Any reports submitted that are below the threshold and don’t have specific figures have been omitted. These are denoted in our data by “$0.00” to indicate the fact that there were lobbying expenses in this year by the company but we don’t have the exact figures.

ISPs and their subsidiaries

These are the ISPs and their subsidiaries included in our analysis:

NOT other subsidiaries that don’t relate to internet services.

Some subsidiaries (i.e. NBCUniversal Media) not included as not relevant to ISPs.

Cricket Wireless is a subsidiary of AT&T but not included in AT&T figures.

Known as Citizens Utilities until 2000 and Citizens Communications from 2000 to 2008.

Some other subsidiaries are not included as not relevant to ISPs.

The subsidiary, Aireon LLC, is related to air transport so omitted.

Now part of Lumen Technologies (which is covered in CenturyLink figures)

Bought by TPG Capital which may explain why no figures from 2010 onwards.

Bought by Altice USA in 2016, hence no data from this date.

Part of the above company but has separate lobbying expenses.

Up to and including 2010, the industry the company was lobbying was Defense Electronics so not included.