How to Set Up a VLAN 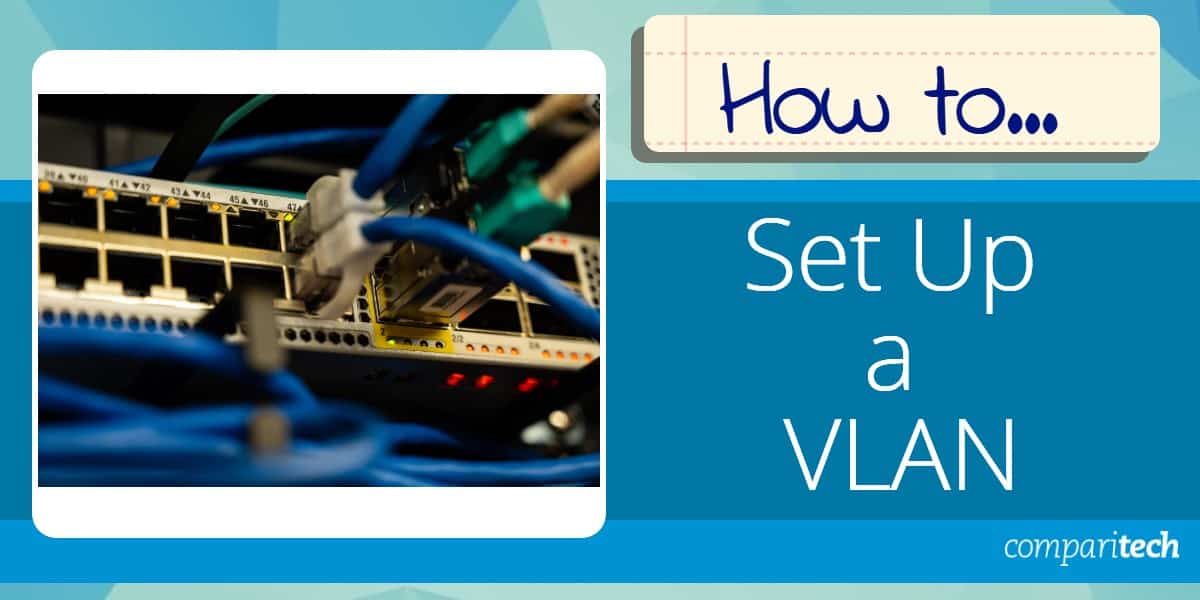 A Virtual Local Area Network or VLAN is a way of partitioning computers on a network into cluster groups that serve a common business purpose. The LAN part indicates that we are partitioning physical hardware while the virtual part indicates we are using logic to accomplish it. In this article, we will see how you can create a VLAN and then configure it to allow data packets from another VLAN to cross over into it.

Note: while we have tried to make the whole exercise of setting up a VLAN as simple as possible, it is assumed that you, the reader, have a basic grasp of network configuration. We also assume that you have a working knowledge of the concepts, and purposes, of IP addresses, gateways, switches, and routers. In addition, you also need to know about navigating the interface and sub-interface configuration procedures on computers and networking devices.

Step-by-step – How to set up a VLAN

The best way to learn how to set up a VLAN – apart from going to networking school – is to actually do it in a practical exercise. And since we don’t all have routers and switches lying about, it would make sense to create our VLAN in a simulated environment.

In this example, we will be using Cisco Packet Tracer to demonstrate how to set up our VLAN. It is one of the easiest, and most realistic, tools to use and allows for both GUI and CLI interfaces. This way you can see the commands that are being executed in real-time even though you are simply clicking and drag-and-dropping as you go about your configuration.

The tool can be downloaded, set up, and verified (by opening a learning account at Cisco Networking Academy). Don’t worry; you can simply sign up for the FREE Cisco Packet Tracer Course in order to gain full access to the design tool.

Also, and apart from the ease-of-use, with Cisco being the market leader, we think this is the appropriate choice to demonstrate how to set up a VLAN.

Of course, you can use any other similar tool – because the concept remains the same. A quick online search will show you there are applications – desktop as well browser-based – for every brand of network interface devices out there. Find and work with the one you are most comfortable with.

While there are many ways of setting up a VLAN or inter-VLAN, the architecture we will be creating will be making use of what is known as a Cisco Router on a Stick configuration.

In this network configuration, our router will have a single physical or logical connection to our network. This router will help bridge the two VLANs – that cannot communicate with one another – by connecting to our switch via a single cable.

Here’s how it works: data packets that are sent out from a computer in the Accounting VLAN – and intended for a computer in the Logistics VLAN – will travel to the switch. The switch, upon recognizing the packets need to cross over to another VLAN, will forward the traffic to the router.

The router, meanwhile, will have one physical interface (a network cable, in our example) that has been split into two logical sub-interfaces. The sub-interfaces will each be authorized to access one VLAN.

When the data packets arrive at the router, they will be forwarded to the correct VLAN via the authorized sub-interface and then arrive at their intended destination.

Our Router on a Stick VLAN setup, with inter-VLAN capabilities, will look like this: 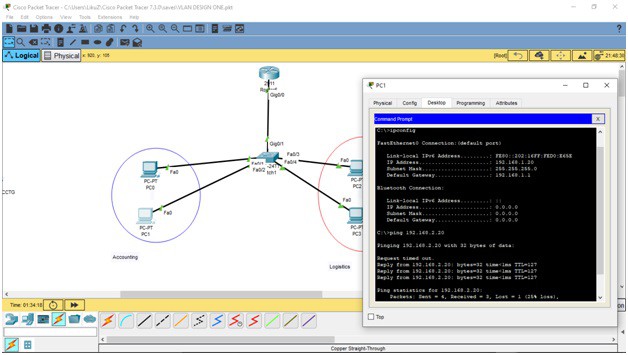 The whole task of creating our network architecture will be divided into four main categories where you will:

So, without further ado, let’s start creating our VLAN. Remember, it will initially have a switch and four computers connected to it. You can bring the router into the design later if you choose to do so.

Drag and drop a switch, a router, and four computers into the main design board. For our demo, we will be using a 2960 switch and a 2911 router. The switch will connect to four computers (PC0, PC1, PC2, and PC3) using copper straight-through wire connections (you will see the description of the hardware and connection types at the very bottom of the Tracer window).

Next, connect the switch to each computer using the FastEthernet ports. 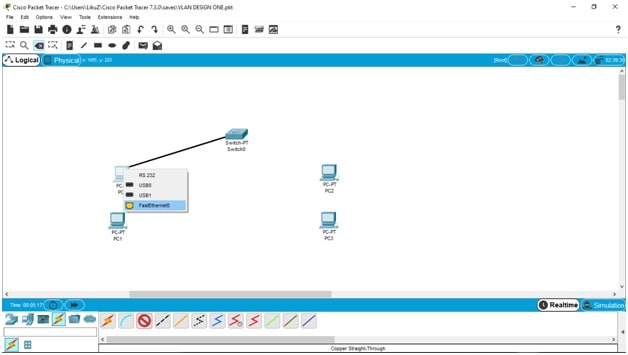 Once all devices are connected you should have all-green traffic flowing between the devices. As the tool tries to emulate devices booting and connecting in the real world, it might take a minute or two. So don’t worry if the data flow indicators remain orange for a few seconds. If your connections and configurations are correct, it will all soon change to green. 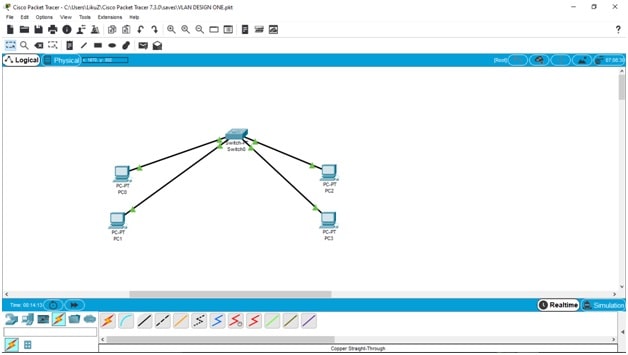 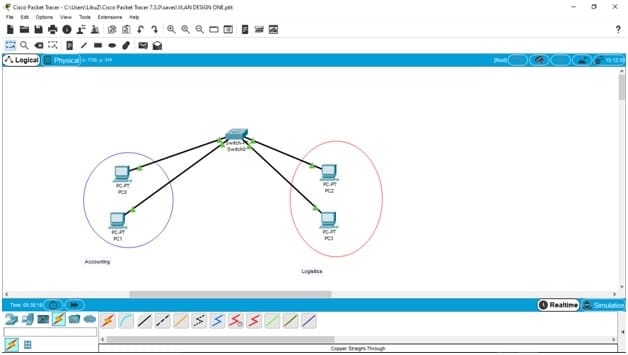 Now, let’s start assigning IP addresses so our computers can start communicating with one another. The IP assignments will look like this:

The default gateway for the computers is 192.168.1.1 for the first two in Accounting, and 192.168.2.1 for the last two computers in Logistics. You can access the configuration by going to the Desktop menu and then clicking on the IP Configuration window. 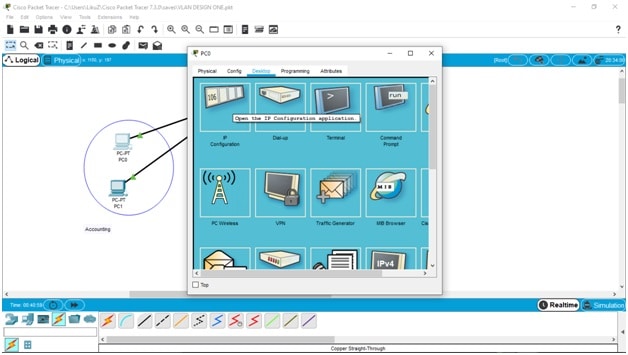 Once you’re there, start filling in the configurations for all the computers: 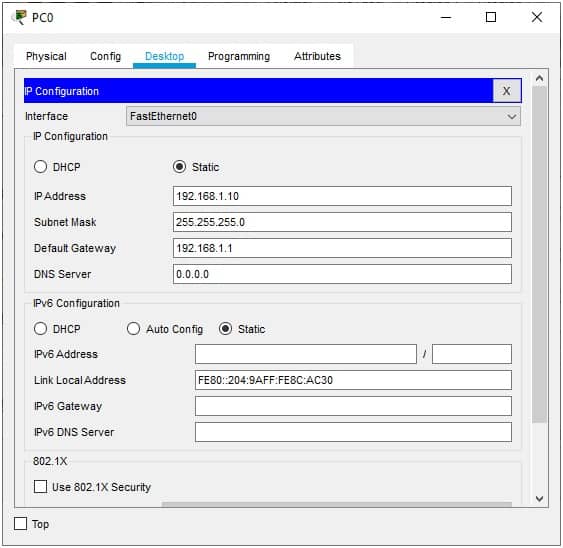 When you are done, we can now move on to the switch. First, though, we need to remember that there will be two types of ports on our switch:

With that in mind, let’s move on to the fun part – configuring the switch to run our VLANs.

Go to the switch’s CLI to type in the commands:

The commands in your CLI should look like this: 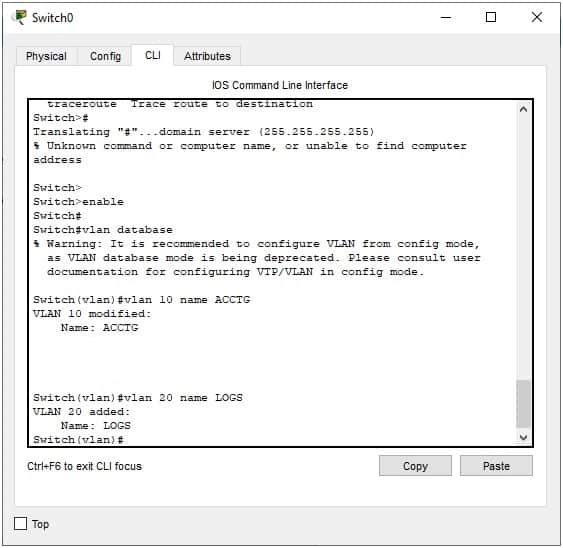 Or, if you’re not up to it, you can simply use the GUI to create the VLANs (and still see the commands run as they are being executed below). Go to the Config-VLAN Database menu and ADD the VLANs by entering their numbers (10,20) and names (ACCT, LOGS). 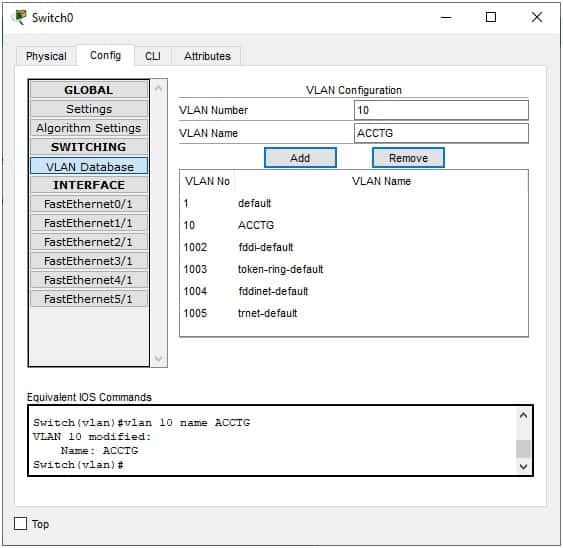 Next, we need to assign each port, which the switch uses to connect the computers, to their respective VLANs.

You can simply choose the interface and then check the box of the corresponding VLAN from the configuration menu on the right: 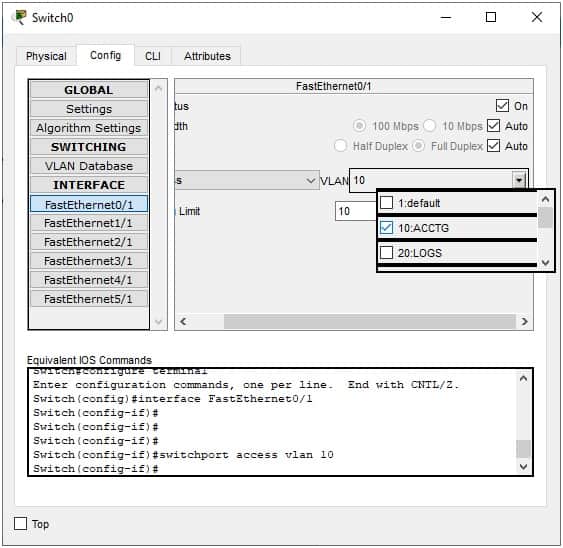 As you can see from the image above, you can alternatively go into the CLI interface of each port and use the command: switchport access vlan 10 to perform the same task.

Don’t worry; there is a shorter way of doing this in case there are a large number of ports to assign. For example, if you had 14 ports, the command would be:

The second command makes sure that the switch understands the ports are to be ACCESS ports and not TRUNK ports.

And that’s it; we have created two VLANs on the same switch. To test it, and confirm our configuration is correct, we can try pinging P1 and P3 from P0. The first ping should be fine while the second one should time out and lose all the packets: 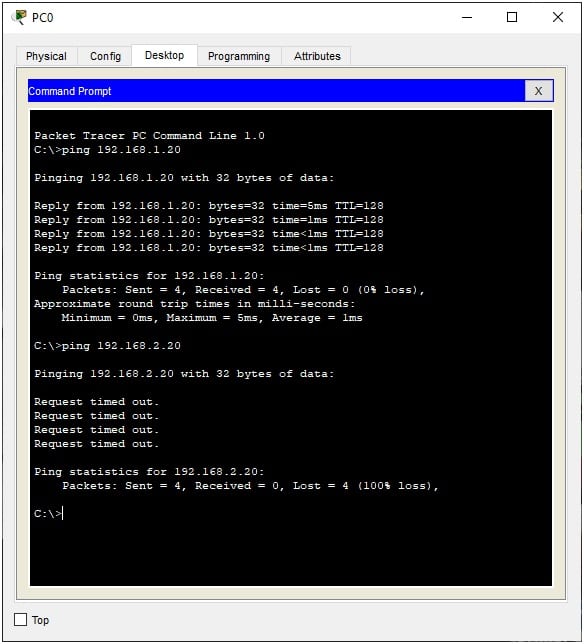 How to set up an inter-VLAN

Now, although we have divided the computers into two VLANs – as was required – it makes more sense that the two departments (Accounting and Logistics) would need to communicate with one another. This would be the norm in any real-life business environment. After all, logistics couldn’t be purchased or supplied without financial backing, right?

So, we need to make sure that ACCT and LOGS are able to communicate – even if they are on separate VLANs. This means we need to create an inter-VLAN communication.

Here’s how to go about it

We will need the help of our router; it will act as a bridge between the two VLANS – so, go ahead and add a router to your design if you haven’t already done so.

Jumping into the configuration, we must understand that we will use one port on the router for both VLANs’ communication by “splitting” it into two ports. Meanwhile, the switch will only use one TRUNK port to send and receive all communications to, and from, the router.

Once done, these “sub-interfaces” – as they called – are then assigned to each VLAN that we want to connect or bridge.

The CLI commands to create the sub-interfaces under the GigabitEthernet0/0 interface would be:

Once you close the CLI, you can confirm your configuration is correct by simply moving the mouse over the router to see your work, which should look something like this: 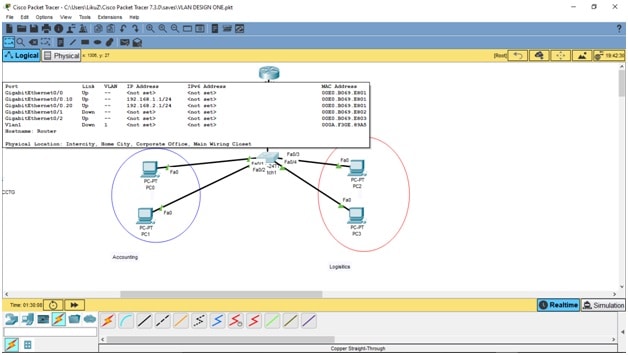 Now, we know that we can only connect our sub-interfaces (on the router) to our switch via its trunk port – and so, we will need to create it now.

All you need to do is go in the switch’s GigabitEthernet0/0 configuration and run: switchport mode trunk. 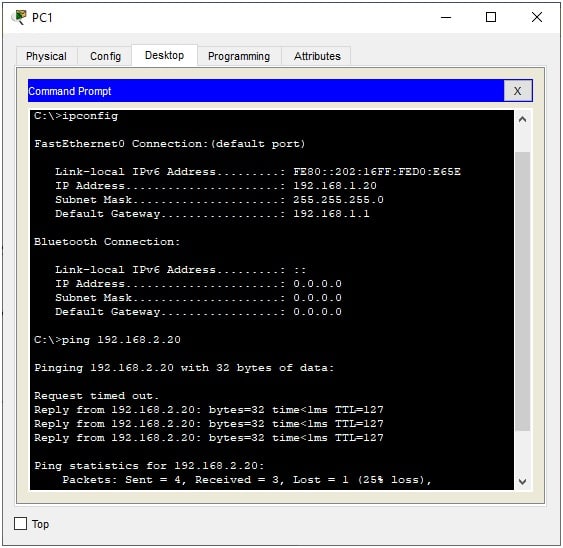 Why set up a VLAN or inter-VLAN

At this point, some of you may be wondering why we would need to go through this exercise and bother with VLANs or inter-VLANs at all. Well, there are many reasons, some of which are:

As we can see, VLANs help protect a network while also improving the performance of the data packets that travel around it.

We thought it would be worth mentioning that there are two types of VLANs that available for implementation:

The problem with this is that anyone can move from one VLAN to another one by simply switching the ports they are connected to. This means administrators would require physical security methods or devices put in place to prevent such unauthorized accesses.

This is the VLAN we have just created in the exercise we did earlier. In this VLAN architecture, we have software VLANs where the administrators simply use logic to assign specific IP or MAC addresses to their respective VLANs.

This means devices can be moved to any part of the business, and as soon as they connect to the network, they return to their pre-assigned VLANs. There is no need for additional configurations.

If there is one drawback with this scenario, it can only be that the business would need to invest in an intelligent switch – a VLAN Management Policy Switch (VMPS) – which can be on the expensive side when compared to the traditional switch used in static VLANs.

It can also be safely assumed here that businesses with a few computers and a smaller IT budget can choose to implement a static VLAN while those with a large number of devices and a need for more efficiency and security would be wise to invest in a dynamic VLAN.

We hope you have found all the information you needed to learn about how to set up a VLAN. We also hope that the exercise was easy to follow and that you can now go on to build upon the knowledge you have gained. Because, even as you continue to scale upwards, these basic steps remain the same – you simply continue to add hardware and configurations to the basics.