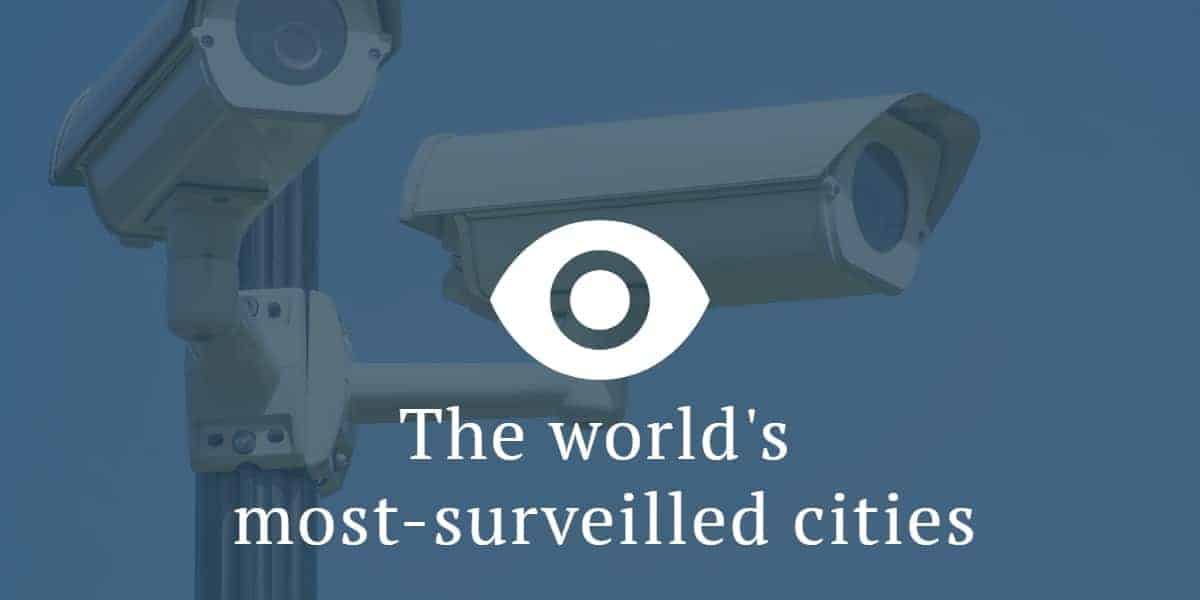 Cities in China are under the heaviest CCTV surveillance in the world, according to a new analysis by Comparitech. However, some residents living in cities across the US, UK, UAE, Australia, and India will also find themselves surrounded by a large number of watchful eyes, as our look at the number of public CCTV cameras in 120 cities worldwide found.

Comparitech researchers collated a number of data resources and reports, including government reports, police websites, and news articles, to get some idea of the number of CCTV cameras in use in 120 major cities across the globe. We focused primarily on public CCTV—cameras used by government entities such as law enforcement.

The 20 most-surveilled cities in the world

Based on the number of cameras per 1,000 people, these cities are the top 20 most surveilled in the world:

This spreadsheet contains the figures for all 121 countries and the source for each number.

A primary argument in favor of CCTV surveillance is improved law enforcement and crime prevention. We compared the number of public CCTV cameras with the crime and safety indices reported by Numbeo, which are based on surveys of that site’s visitors.

Estimates vary on the number of CCTV cameras in China, but reports range from 200 million up to 626 million in use by 2020.

Based on the country’s current population of 1.4 billion people, that would mean nearly one camera for every two people. Although this projection might seem vast, it may be a fraction of the actual number.

The city of Shenzhen plans to have 16,680,000 cameras installed in the coming years, a 1,145 percent increase over today’s figure of approximately 1,929,600 cameras. If the whole of China increased the number of CCTV cameras by 1,145 percent, that would mean a total of 2.29 billion cameras—just less than two cameras per person.

China is also a fervent adopter of face recognition surveillance. It is often used to restrict individuals’ freedom of movement in combination with the country’s social credit system. If someone’s social credit is too low, for example, they can be barred from using certain types of public transportation. Cameras equipped with face recognition technology are put in place at transportation hubs to enforce these rules.

Comparitech researchers collated a number of resources to get an estimate of the number of public CCTV cameras in use. We focused on the world’s most heavily-populated cities but omitted any city where we couldn’t find enough data. Where possible, we have also tried to find the number of private CCTV cameras in use. However, as this isn’t possible for every city, we did not include private CCTV in the overall totals.

For China, we used these sources but also created estimates based on the growth rates indicated in this area. By 2020, China is anticipated to have 626 million CCTV cameras. This 213 percent increase has been applied to our future projections. Equally, if the source for the current CCTV camera numbers was older than 2019, we have applied a 20 percent increase year-on-year. This is the growth rate indicated by the Chinese Ministry of Public Security.

Due to a wide range of sources reporting estimates and a general lack of public information regarding CCTV cameras, actual figures may be higher or lower than what is indicated.

Editor’s note: An earlier version of this article misquoted a source stating China would have 626 million CCTV cameras by 2022. We have amended it to the correct year, 2020.