How to Install PowerShell Modules: A Step by Step Guide 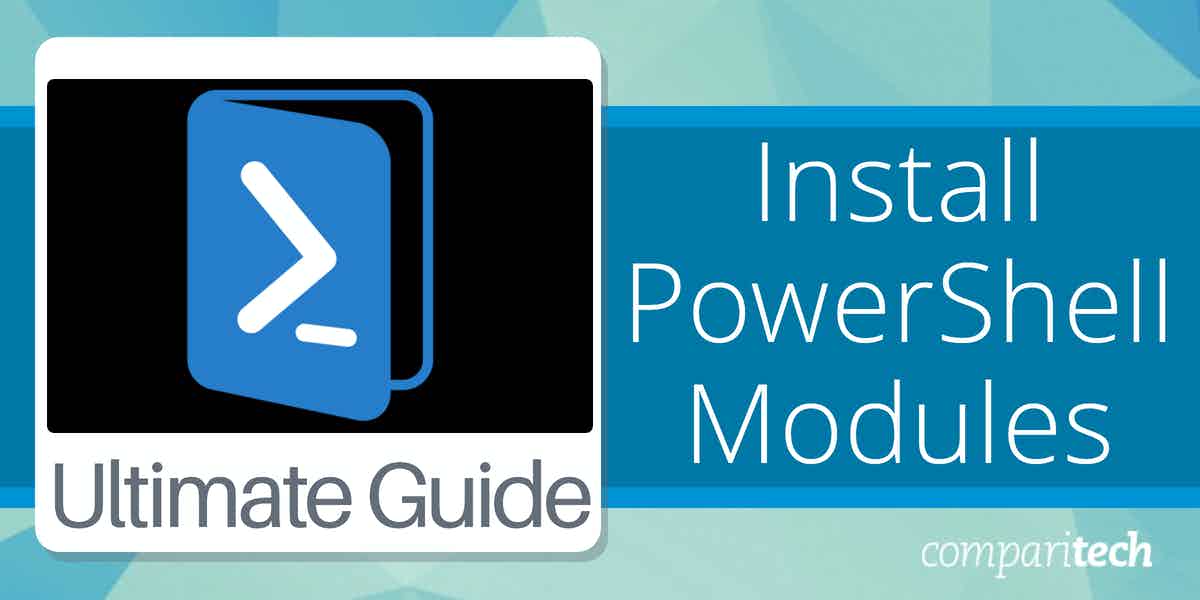 PowerShell is a cross-platform task automation solution from Microsoft, consisting of a command-line shell, a scripting language, and a configuration management framework

A PowerShell module contains a set of related Windows PowerShell members such as cmdlets, providers, functions, workflows, variables, and aliases. The members of a package (which are usually grouped in a single directory) can be implemented in a PowerShell script, a compiled DLL, or both. The primary objective of a module is to allow the modularization of Windows PowerShell code.

By defining a set of related script files, assemblies, and related resources as a module, you can reference, load, persist, and share your code much easier than you would otherwise. For example, people who write commands can use modules to organize their commands and share them with others, while those who receive modules can add the commands in the modules to their PowerShell sessions and use them just like the built-in commands.

The PowerShell that is shipped with Windows comes with a few hundred cmdlets that can help you do basic tasks like reading files, creating registry keys, pinging computers, connecting to remote systems, and so on. However, this out-of-the-box PowerShell cmdlet cannot support all that you want to do with the language. To perform tasks outside of the built-in PowerShell commands, you must install modules that contain commands that give you that functionality. In this article, we will provide a step-by-step guide on how to install PowerShell modules.

A module comprises four essential components, which include a PowerShell script or a managed cmdlet assembly, additional assemblies or scripts, a manifest file, and a directory that contains all of those content. The following sections describe the types of modules you can get by mixing and matching the different possible parts of a module together:

How to Install a PowerShell Module

Once you have created a script, binary, or manifest module, you can save your work in a location such as a system folder where Windows PowerShell is installed, or a user folder, so that others may have access to it. Before you can use a module, you need first to install the module. Secondly, you need to find the PowerShell commands that the module added using the cmdlet Get-Command, and lastly, you need to use the commands that the module added.

Once you’ve identified a package that you’re interested in, you can learn more about it by examining the metadata uploaded with the package at the package’s specific page on the Gallery. You may also want to download the package from the Gallery for further inspection. To do that, run either the Save-Module or Save-Script cmdlet, depending on the package type. This allows you to save the package locally for inspection of the contents without installing it.

Installing PowerShell modules from the PowerShell Gallery is the easiest way to install modules. To install a package or module from the Gallery, we use the command: Install-Module or Install-Script cmdlet, depending on the package type.

Furthermore, before installing a module, you need to know the module’s name and the command to install it. The Gallery page will tell you what the command is to install the module. In this example, we will install a module we found on the Gallery named NetworkingDsc. To do that, run the following command:

Depending on the NuGet provider you are running, you may receive the notification that the NuGet provider is required to continue. PowerShellGet relies on the provider named Nuget, and you may be required to install the newest version before proceeding. Type Y and press the Enter key if you see, “Do you want PowerShellGet to install and import the NuGet provider now?”. Again, depending on your settings, you may receive another notification, “Are you sure you want to install the modules from ‘PSGallery’?”. Type Y and press the Enter key to continue. This will commence installing the NetworkingDsc module, which you can see visually by the loading text at the top of the PowerShell window. After the installation is completed, you can verify it by running the command: Get-Module -ListAvailable.

1. Determine the install Path: You need to determine the install path for your PowerShell modules, so you know where to put new ones. This helps ensure that the new module is installed in a path listed in the PSModulePath environment variable. You can determine where to install your module using one of the paths stored in the $ENV: PSModulePath variable. To do this, open a PowerShell window and run the command:  $Env: PSModulePath.

The output displays the following path as shown in Figure 3.0 below:

Use the first path if you want the module to be available for a specific user account on the computer. Use the second path if you’re going to make the module available for all users on the computer. The third path is the path Windows uses for built-in modules already installed with the Windows OS. Microsoft recommends you avoid using this location. So you are left with the first or second path.

Using one of these paths means that PowerShell can automatically find and load your module when a user calls it in their code. However, you may also wish to add your paths but stick with the first two paths unless necessary. If you store your module somewhere else, you can explicitly let PowerShell know by passing in the location of your module as a parameter when you call Install-Module. If you see other paths listed in your environment variable, it may be from your installed applications. Some applications install PowerShell commands and automatically add those to the variable. Now that we know where to put new modules let’s proceed to the next step.

2. Copy the new module to the path: Now download the PowerShell module from your preferred site and copy it into one of the two paths identified in step 1 above. In this example, we will make it available to all users on the computer to copy it to the directory C:\Program Files\WindowsPowerShell\Modules. Once completed, you can check if the new module is listed as available to PowerShell by running the command: Get-Module -ListAvailable.

3. Import new module: With the new module in place, we just need to tell Windows to load it to use it in our current PowerShell session. To this, use the following command syntax: Import-module -name ModuleName

For example, let’s say you want to import the command NTFSSecurity (PowerShell Module for managing file and folder security on NTFS volumes), you’ll run the command: Import-module NTFSSecurity. If you receive a notification to confirm if you trust the script or module and want to run it, type R to run once (assuming you’re sure you want to run it). And that does it, and the new module is now ready for use.

Although Microsoft allows you to install PowerShell modules from third-party sites, there are also security implications. Malicious actors may take advantage of this loophole to develop and provide scripts containing malicious codes. Therefore, ensure that you load only trustworthy modules or those from a reliable source.