Learn about traceroute and tracert, how to use it, the syntax, examples, how it is useful to network admins and discover the three best traceroute utilities and tracert software.
Liku Zelleke Network configuration, optimization, and security expert 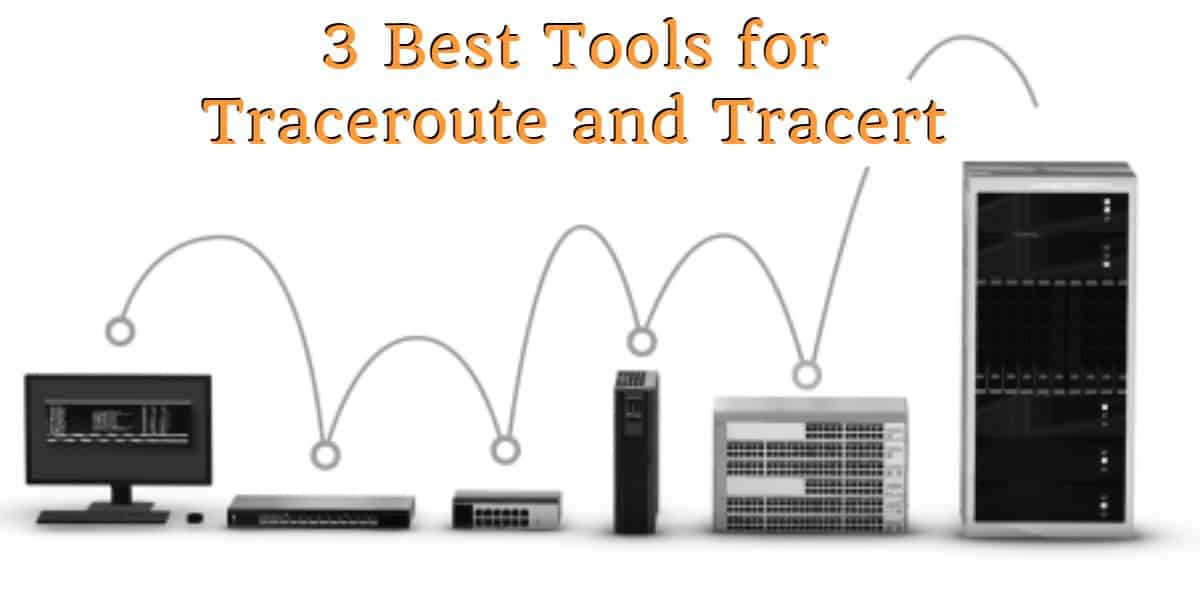 The need for traceroute and tracert tools

Digital networks are a constantly changing phenomena, which means, they require constant monitoring and reconfiguration if they are to be kept as efficient as possible. This means the administrators that are responsible for the upkeep of such networks require tools that help them make sense of what today, has become a complicated mash-up of digital highways connecting a cornucopia of gadgets that communicate using insanely-fast data transfer traffic. Their users, on the other hand, have come to expect reliable and fast connections whenever they log on to a network (local or otherwise).

These two common scenarios have created a demand for tools that help make all stakeholders happy. And among many such tools, there is one that can help with identifying connectivity and latency issues: the traceroute or tracert command.

Here is our list of the 3 best traceroute utilities and tracert software tools:

What is traceroute or tracert?

Traceroute and tracert are two commands that run tools used for network diagnostics and help with resolving connectivity issues by tracing the paths data packets take while traveling from their origins to their destinations.

On a Windows machine an admin would use the tracert command; while on a Linux or Mac OS one they would use the “traceroute” command instead. The syntaxes for the commands are:

Although the original tools were initially conceived to run from the CLIs (Command Line Interfaces), there are now more “flashier” versions with remarkable GUIs (Graphical User Interfaces). In this article, we will explore three of the best tools for traceroute and tracert.

Screenshots of traceroute and tracert

In the image below, the tracert command is running on a Windows machine and traces the path data packets would need to traverse if it had to reach the www.yahoo.com domain. 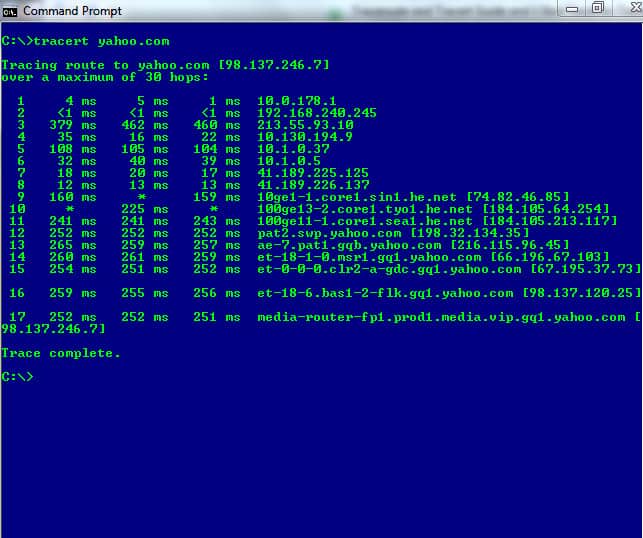 On a Linux machine the same CLI command using the traceroute keyword syntax to trace the path to google.com would look like: 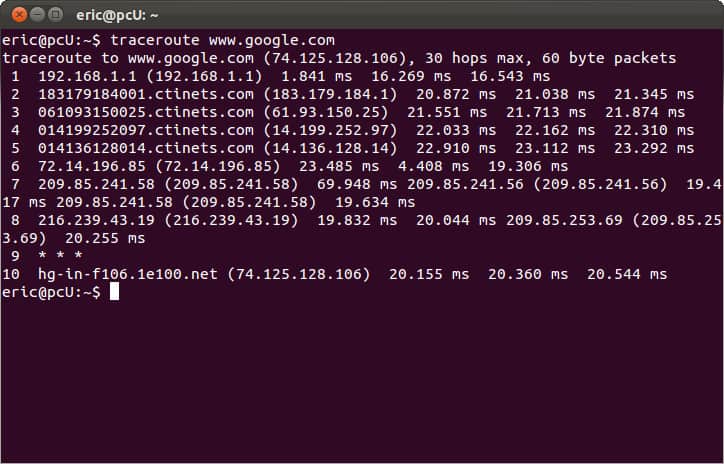 As we can see from the two images, once the command is executed, the program sends out a query across the network. This is to see which routes can be used to transport data packets between the origin machine’s network and the destination’s network.

How do tracert or traceroute work?

To see how traceroute/tracert works, let us take a look at a breakdown of what occurs once a tracert or traceroute command has been sent: 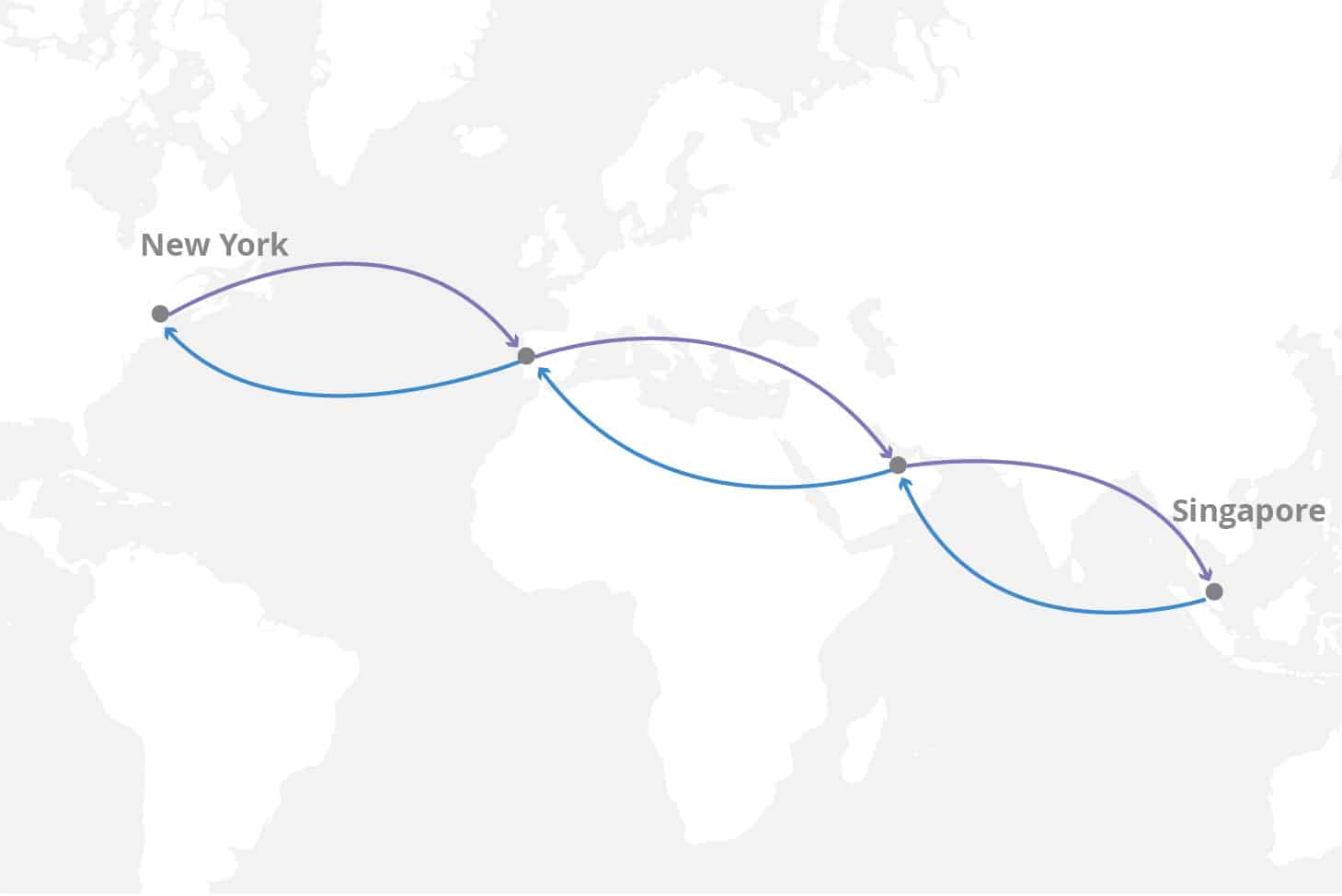 Step 1: When the first packet is sent out it is assigned a TTL of 1. When it reaches the first network device the TTL is reduced by 1 (making it 0 and hence dropping the packet) and a response is sent back to the source. This returning message will close a transport cycle allowing for the RTT to be calculated. If the replying device was the intended target, then the process ends with a “Resolved” message. If not…

Step 2: A second packet will then be sent with a TTL of 2. It passes through the device identified in Step 1 (where it loses a TTL value) and moves on to the next connected device beyond it. When it reaches a second device, it drops a TTL (making it 0) and a reply is sent back to the original host.

Step … n: The packets keep going out with increasing TTL values (until the maximum is reached) and the replies keep returning with a little more detail about the network that connects the origin and destination hosts.

Step “maximum no. of hops”: Finally, when the packet with the maximum number of hops is sent out, one of two things can be expected:

A little bit more about the TTL

The TTL value determines the number of intermediate routers or other connecting devices that are going to be traversed as the packet travels towards the destination host. The traceroute/tracert command launches packets with TTL values starting at 1 and gradually increasing with each subsequent outgoing packet.

The TTL values decrease every time the packet hops to a device. Any packet whose TTL value reaches zero, is discarded and a “Time Exceeded” ICMP error message is generated and sent back to the original host.

Proceeding in this way, the networking tool uses the packets and reply messages to build a list of routers that data has to traverse through, until the destination is reached and returns an “ICMP Echo Reply” message.

How does traceroute or tracert help network admins?

Once the network path has been mapped out, a network admin can simply look at it, follow the paths that were taken by consecutive packets. They can see for themselves where the problem is (in case of non-delivery of the packets) or that everything works just as well as it should.

Then, all that remains is to fix disconnected routers and tweak the ones that have a high latency or packet loss rate.

Now that we have an idea of how they work, let’s have a look at the three most efficient tracert or traceroute tools that every administrator can use to ensure they have a well-performing network.

Our methodology for selecting a Traceroute tool

We reviewed the market for tracert software and analyzed the options based on the following criteria:

SolarWinds is one of the biggest players in the network performance monitoring market. They are the makers of some impressive tools including the Traceroute NG – an easy-to-use, yet efficient network connection monitoring tool.

Traceroute NG – the tool that makes it all clear

With Traceroute NG, an administrator would have access to accurate single-path analysis visibility via CLI from the source to the destination hosts. It would effectively identify the number of hops, respective IP addresses, hostnames, packet loss, and latency. 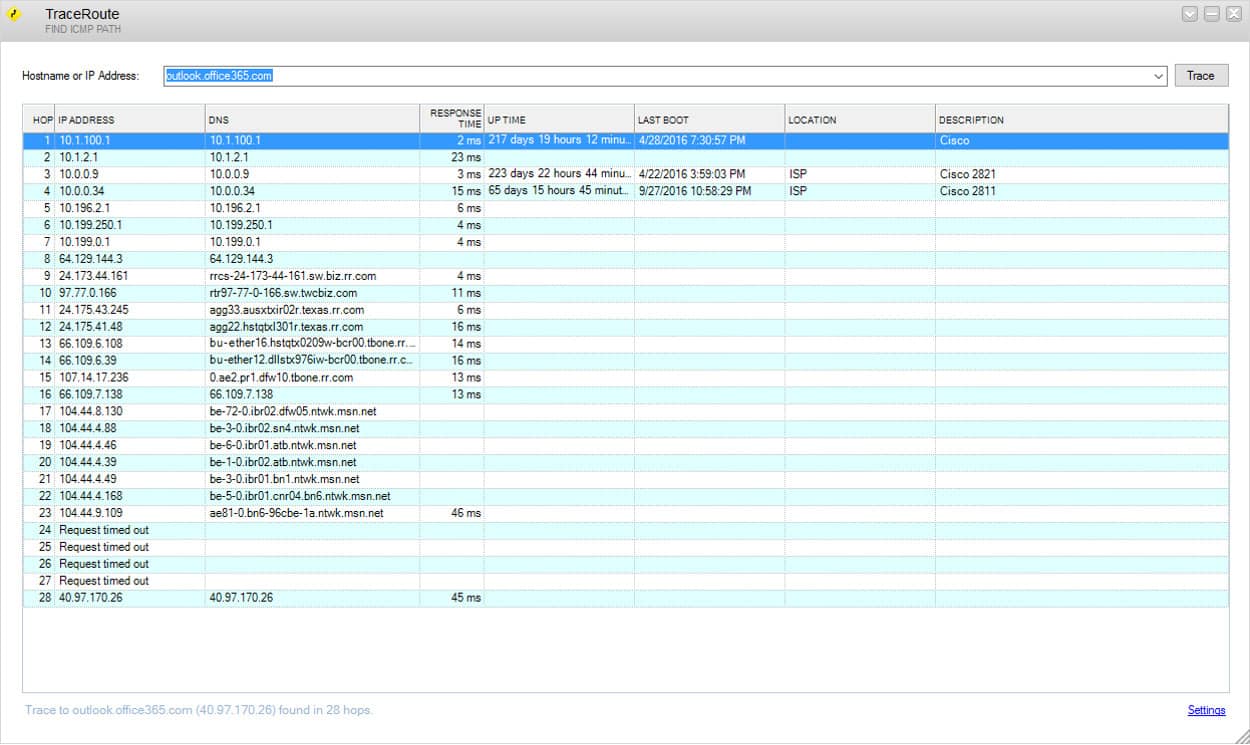 Other great features admins can expect from Traceroute NG include:

SolarWinds Traceroute NG is a FREE TOOL and can be downloaded at Solarwinds.com

SolarWinds Traceroute NG should be in every administrator’s toolbox. It’s great for detecting paths, offers continuous probing of IP addresses, has TCP and ICMP network path analysis, IPv4 & IPv6 compatible and is totally free to use. 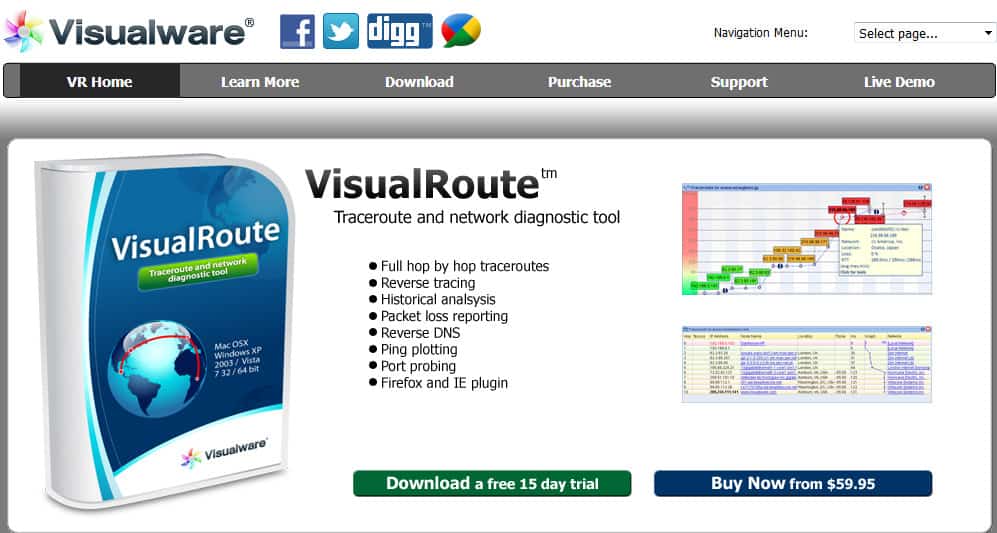 For network administrators looking for an exciting little tool that can perform as well as any of the more complex traceroute tools out there, they will certainly find it all in VisualRoute. This visual traceroute network tool is a joy to use as its GUI makes work a lot of fun.

VisualRoute – reporting and diagnostics at its best

Administrators can get analytics results and reports that give advice like, “In general this route offers a good throughput, with hops responding on average within 68ms. However, all hops after hop 12 in network ‘[Network for 130.117.50.246]’ respond slightly slower than average.” Taking a look at more features, though, it becomes quite obvious that VisualRoute is indeed a serious tool:

Path Analyzer Pro is a visual traceroute tool that administrators with Mac machines can use alongside their Windows brethren as it works on both platforms. It is an amalgamation of tools that, apart from the main traceroute purpose, offers features that help with performance testing, DNS, Whois, and address resolution features. Some of the features that admins can expect from their Path Analyzer Pro include:

traceroute and tracert will draw the network for you

If you are a network administrator, then you will truly appreciate the capabilities of the three best traceroute and tracert tools we have just seen. Using one or all of them will allow you to draw an accurate picture of your network and the connectivity that lies beyond it. Make use of the tools and you will always have a clear image of what your network looks like.

What does a route issue mean?

A route issue means that there is a problem somewhere on the path to the destination device. Usually, if there is an issue with one of the routers on a path to a faraway place, the neighboring routers will know about the problem and route traffic around the faulty node. Route issues are more likely to happen on your own network and be caused by an error in a routing table.

What is the difference between Traceroute and Tracepath?

Traceroute is an older utility and tracepath was created as a slight improvement. The main difference between the two is that tracepath gives the MTU without it being specifically requested. The MTU is available in the output for traceroute, but you have to add on an extra option in order to get it. One other old difference between the two was that traceroute was only available to superusers on Unix/Linux. However, it is now available to any user just like tracepath.

Why is Traceroute so slow?

Monitor, Manage & Fix Over 200 Apps from One Single Web Console 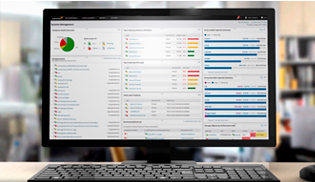