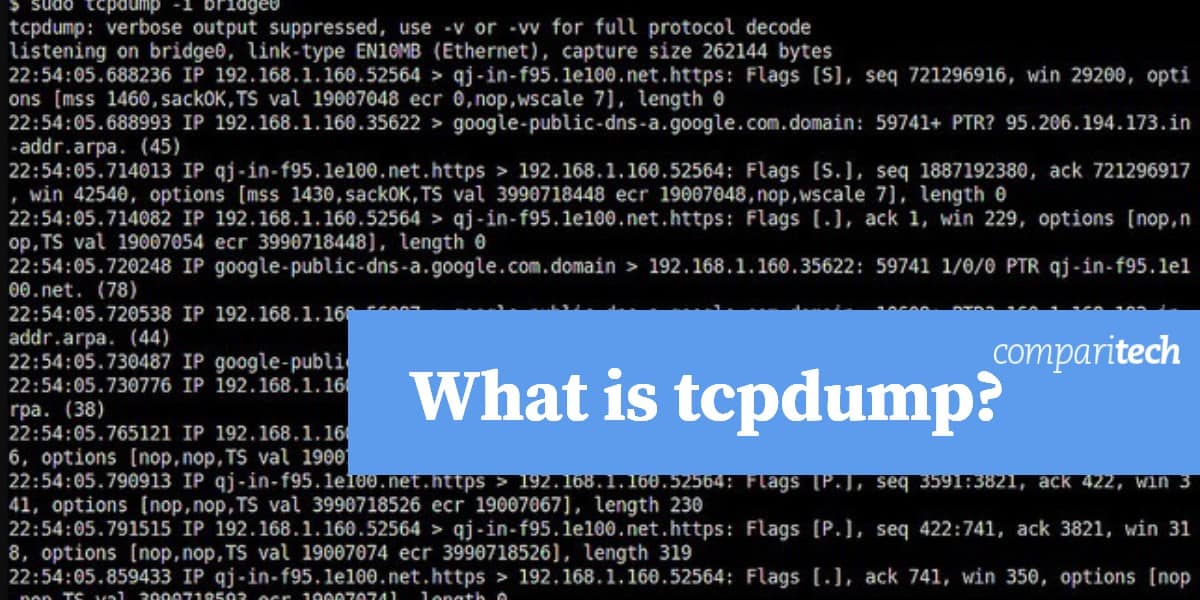 If you have a Unix or Unix-like (Linux, Mac OS) operating system, you can use the tcpdump tool to examine network traffic.

The tcpdump program is a command line utility that can be installed for free.

It is not commonly integrated into operating systems, so you need to install it from the tcpdump GitHub registry or from the official tcpdump website.

The packet capture utility used by tcpdump is provided by libpcab, which is a C/C++ library of procedures. The main tcpdump program is the interface for the packet capture process. When run, it will start the libcap process to capture network packets and then display their contents on the screen. Unless a limit to the number of packets to be captured is specified when the program starts, it will continue to run forever. The processing is then terminated by an interrupt signal (Control-C).

The program is run at the command line and includes several options, which are indicated by flags. These flags alter the behavior of the program to get it to select packets that match a specified pattern, limit its running time, or get it to read stored packets from a file rather than from the network interface.

The tcpdump command can be issued by itself or with options, parameters, and/or regular expressions. None of these elements are mandatory and the order is not important.

The command tcpdump is followed by options, which are also known as flags. Each of these is denoted by a hyphen followed by a letter. Below is a list of each of these flags.

-A        print packets in ASCII without the link-level headers

spi is the Security Parameter Index

ipaddr is the destination address on the packet

algo is the algorithm, defaulted to des-cbc and the field is optional.

secret is the ASCII text for ESP secret key. If preceded by 0x, then it is a hex value

-#         Print an optional packet number at the beginning of the line

-xx       Print the data of each packet, including its link level header, in hex

The parameters for tcpdump are also known as primitives. These specify whether the packet capture should only get data sourced from specified hosts. These parameters can also be expressed as conditions using the Boolean operators and, or, and not.  You don’t need to put an equals sign (=) between the parameter name and its value and you don’t need to space parameters with punctuation. In each case, you just need a space.

The most commonly used of these parameters is host, which allows you to limit the capture to transmissions from just one source. In each case a device name as a parameter value can be replaced by its address. Where a parameter has a dst version, that variation limits output to just packets that have that attribute for its destination. Parameters that include src look for packets that have the given value in data related to their origin.

Here are the parameter options:

Can also be prepended with ip, arp, or rarp

gateway       host – get packets that passed through gateway host

The expressions segment of a tcpdump command allows you to add a little programming to your packet selection. Unlike a regular program, however, this set of instructions has to be written in one line. If you are a frequent user of Unix or Linux, you will be used to the regular expressions of shell scripting and should have no problems understanding the format of these filters.

Packets that meet the test laid down by the expression will be captured. So the result of each expression has to be “true”.

There are a few expression conditions that are not generally encountered in shell scripting and these are listed below:

This returns the length of a packet. Usage example: len != 5.

proto is the name of a protocol layer. It can be:

expr is the byte offset. This needs to be included, but it can be given as 0 in order to take the value from the beginning of the object.

size is optional and it represents the number of bytes in the option. The default value is 1, but it can also be 2, 3, or 4.

In all of these cases, the results of the command will show on the screen, unless a file-related option is included or unless the command is launched with a stand output redirect, or pipe to a file.

Display packets traveling from or to the computer identified as lab1:

Display all IP packets travelling between lab1 and any node other than reception:

Display the SYN and FIN packets of each TCP conversation that involves a non-local host:

The record format used to write network packets to files has become a standard that has been adopted by many newer packet sniffers and traffic analyzers.

The standard is not straightforward and is adapted for each protocol. However, those applications that have adopted the format also account for these variations. The format is called pcap, which is the name of the packet capture process used by tcpdump. Files in this format usually have the .pcap extension.

There is an adaptation of tcpdump that runs on Windows. This is called WinDump and it relies on WinPcap for packet capture in the same way that tcpdump uses the pcap function of libpcap. WinPcap is actually owned by Riverbed Technology. This same company is the primary funder of Wireshark, which is probably the most famous and widely-used packet sniffer in the world. There is a wireless version of WinPcap, which is called AirPcap. You can download WinDump, WinPcap, and AirPcap for free from the WinPcap website.

The tcpdump command line utility is useful for those who are familiar with the Unix and Linux operating systems and enjoy writing shell scripts. Those who are not so experienced at putting together commands with regular expressions at the command line will find it difficult to use this program.

You have other options because there are many packet sniffers available, such as Wireshark, which was mentioned above. You can find out more about alternatives to tcpdump in this review of packet sniffers.

Do you have a favorite packet sniffer? Are you a fan of tcpdump, or do you prefer more user-friendly alternatives? Leave a message in the Comments section below and share your experiences.

What is the difference between Wireshark and tcpdump?

Both Wireshark and tcpdump capture packets. On that level, both of these tools are the same. However, Wireshark has a DUI interface that includes packet analysis functions. Tcpdump is a command line utility. It has fewer features and it is harder to use.

How do I kill a tcpdump process?

Where are tcpdump files stored?

Unless you specify a directory and file name where tcpdump records should be stored, the file will be written to the directory that you were in when you ran tcpdump. You can specify where tcpdump should store captured packets with sudo tcpdump -i 1 -w followed by the path and filename.