SugarSync might be the most polished and intuitive backup and sync service out there for personal use, but it comes with a high price tag.

SugarSync is a paid subscription service – an expensive one, at that – among a sea of free alternatives that offer many of the same features and functionality. Going toe-to-toe with the free tiers of behemoth rivals like Google Drive, Dropbox, and Microsoft’s OneDrive, it has no option but to try and beat them all. That sounds like a long shot, but ultimately, SugarSync delivers.

Additionally, sharing a folder will earn you an extra 125MB of free space, and inviting a friend earns 500MB.

SugarSync’s primary function, as the name implies, is file synchronization. That’s slightly different than simple cloud backup. Syncing ensures two or more devices contain the same updated files. If you add, modify, or remove a file from one location, the synchronization process will instantly do the same on the other device.

Backup, in contrast, simply means copying files from one location to the other. To update the files, the backup must be scheduled and performed again, then manually downloaded to other devices. In short, backups are for peace of mind and security, while syncing is more tailored for users that might be collaborating with others or working from multiple devices.

So if you’re looking to back up an entire hard drive in case of theft or malfunction, SugarSync probably isn’t for you. But if you want to share, collaborate, and access files from multiple devices, SugarSync does that very well.

Perhaps the biggest advantage to SugarSync over its free tier-touting rivals is the ability to sync any existing folder on your computer and access it from any other device. That’s a sharp contrast to services like DropBox, which require you manually move files into a specified sync folder.

SugarSync makes the selected files and folders available to all your connected devices by default, but you can specify which ones to include. That’s useful if you have sensitive files that you only want on your work PC and not your smartphone, for instance.

You can choose to share files either by assigning a file a public link or privately sharing via invite sent by email. Permissions can be assigned to each file and folder: view, add, edit, and delete. You can share a public link via email or to social networks like Facebook and Twitter, but bear in mind this will only give your friends and followers a link to a preview/download page and won’t natively post a photo or video. Recipients do not need a SugarSync account to download shared files and folders.

One neat perk is the ability to upload a file via email. Each SugarSync account comes with an auto-generated email address where you can send emails with attachments, and those attachments will appear in your main sync folder. A new email address can be generated at any time to prevent abuse. The only downside is that these email addresses tend to be long and difficult to memorize.

SugarSync promises security on two fronts: protection during file transfers and encryption of your stored files. The former is accomplished using TLS, or Transport Layer Security. That’s a hip way of saying it utilizes the most recent versions of Secure Sockets Layer, or SSL. TLS is actually the successor of SSL, and together they form the same security foundation used on HTTPS websites.

Any time you make a purchase online, for instance, your payment information is usually entered on an HTTPS website so that it can’t be tampered with when being sent to the retailer. Long story short, it’s pretty safe.

Once your files have arrived on the server, they are encrypted using 256-bit AES, which is an industry-standard encryption level. So far, so good.

Unfortunately, the key to unlocking that encryption is held by SugarSync, not you. SugarSync doesn’t offer customers the ability to create and use their own custom keys. That’s probably fine if you’re an average user without any highly-sensitive information, but it’s generally unsuitable for businesses.

Furthermore, it’s not clear where your files are actually stored. Ireland-based J2 Global acquired SugarSync in March 2015, and the company’s privacy policy says it conforms to the US-EU Safe Harbor framework. That should prevent your data from ending up in any country that isn’t up to standard, but it still doesn’t specify which countries’ servers all that data is hosted on. Different countries have different policies when it comes to accessing private data, and things get even more complicated when you consider that SugarSync doesn’t own its servers. Rather, it buys virtual servers hosted on providers like Amazon Web Services.

Ultimately, that makes SugarSync – a for-profit company that will most likely act in its own interests rather than yours if cornered by authorities – liable for your data. With a private encryption key, SugarSync wouldn’t be able to decrypt your data even if it wanted to. Alas, this isn’t possible even on SugarSync’s business tier.

Whether on desktop client, mobile app, or in a browser, SugarSync’s interface is top-notch. The browser version displays the most details about your files, including the five most-recent versions of files that have been modified. Dropbox users will feel more or less at home with the web version. 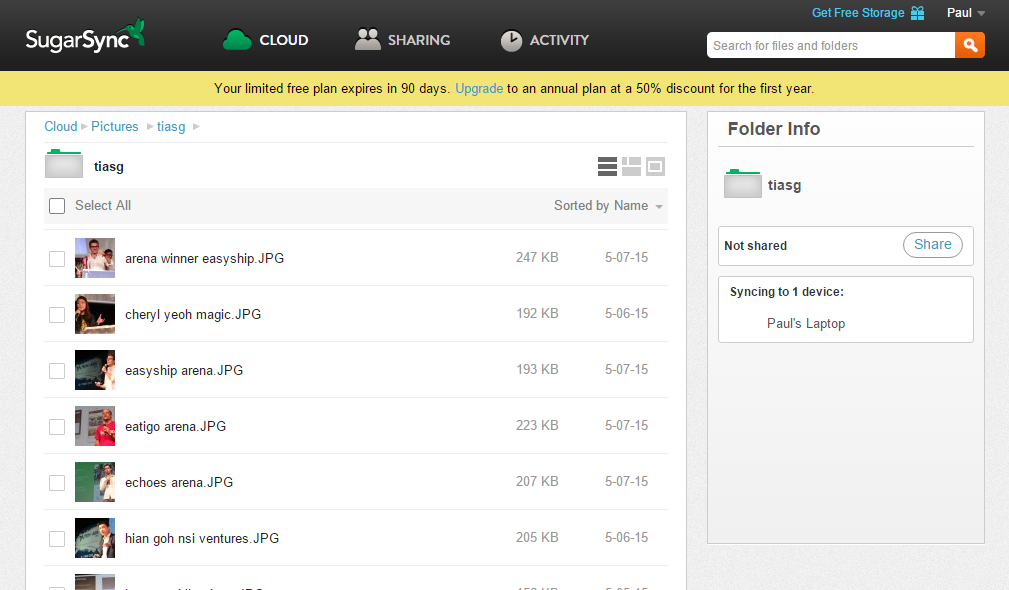 The desktop and mobile apps look and function very similarly, and both are far more aesthetically modern than most of SugarSync’s competitors. The native apps are organized into folders, devices, public links, shared files, active transfers, and trash. Native apps are available for Windows, Mac, iOS, Android, Blackberry, Windows Phone, and Symbian. 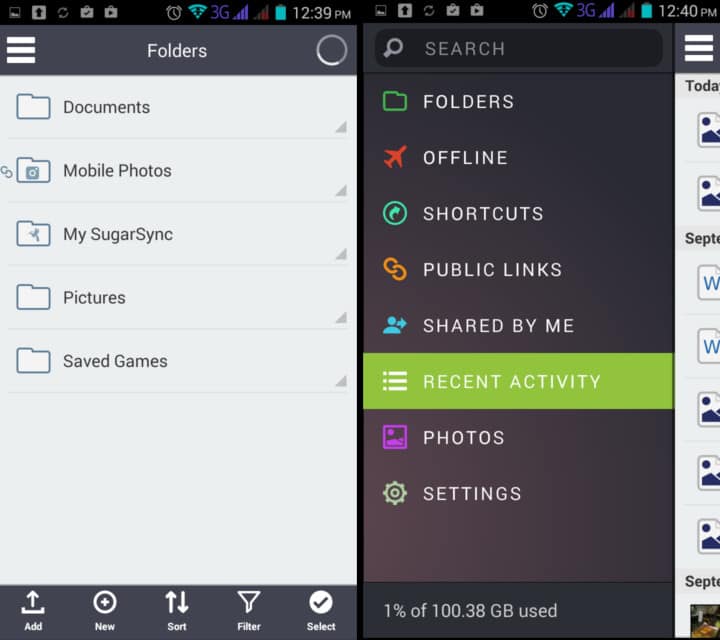 SugarSync is highly customizable and detailed, but never cluttered. Set up proxies, limit upload speeds, and integrate with other apps – everything is where you expect it to be. SugarSync hooks up with Outlook, as well as several other apps including Box, QuickOffice, and Documents To Go.

Some minor details are slightly unpolished; for instance, my name always appears as “Paul%20Bischoff _” instead of “Paul Bischoff” on the browser version, but those are only petty complaints.

SugarSync includes a search function for all your backed up files, but it can only search for file names and other metadata, not the contents of a file.

Wiping and removing lost or stolen devices is easy and only takes a few clicks.

Photos and videos can be viewed using their thumbnails and even in a cascading gallery on the mobile app. The app can automatically back up photos as you take them with your smartphone or tablet.

Offline storage brings another useful feature to the mobile app. If you don’t have a steady internet connection and want to be able to quickly access files from SugarSync, you can store them locally on your phone or tablet’s SD card or internal storage.

Text files can be created and edited within the app, but no other collaborative editing of files is on offer. The text files might make a handy notepad that syncs to all your devices, but that’s probably best left to a more robust app like Evernote or Google Keep.

Installing the desktop version of SugarSync will also add some context menu options to your computer’s stock file browser. Right clicking in Windows Explorer, for example, gives the option to copy a backed-up file’s public link or show its previous versions (but, notably, not the option to back up a file).

SugarSync doesn’t have instant customer support for personal users. Only business tier users get to use live support. If the FAQs don’t answer your question, you must submit a ticket through the website. When we submitted a ticket as a test, it took less than one hour for customer support to respond with a helpful answer.

Adding to SugarSync’s elegant design, the apps don’t pester you with advertisements or upgrade promotions, even during the free trial. Nor will you receive any pestering emails or popup ads. The app runs quietly in my notification area (a.k.a. system tray) on PC and shows up as a status icon when backing up files on my Android phone.

Cancelling a SugarSync account is easy and takes about two minutes.

Ultimately, SugarSync is a great option for individuals who can afford it, want advanced syncing capabilities, and can compromise a bit on security.

Visit SugarSync
Latest guides
How to connect to Box using FTP server June 6, 2021 / by Stephen Cooper How to connect to Dropbox using FTP server May 29, 2021 / by Stephen Cooper Dell DataSafe Online discontinued, try these 9 secure alternatives April 5, 2018 / by Aimee O'Driscoll Upgrading to Windows 10? Back up your PC first! Here’s how September 24, 2015 / by Paul Bischoff The difference between cloud backup, cloud storage, and synchronization September 23, 2015 / by Paul Bischoff Is Cloud storage and online backup secure? September 7, 2015 / by Lee Munson
Latest Blog posts
Best free backup apps for Android in 2022 October 21, 2021 / by Ray Walsh 11 Best Secure File Sharing Tools & Software for Business in 2022 October 21, 2019 / by Tim Keary Rapidshare is discontinued, try these alternatives February 4, 2019 / by Aimee O'Driscoll + More blog posts on Cloud and Online Backup
Latest reviews
ZoogVPN Review – The best of the small? May 9, 2022 / by Marc Dahan ClearVPN Review – If it’s the only way to do something, it’s not a shortcut May 9, 2022 / by Marc Dahan Reseña de VyprVPN 2022 May 4, 2022 / by Aimee O'Driscoll + More Online backup
SugarSync User Reviews 1 review
0 / 5
Have you used SugarSync? Add your review

Years ago I started using “free” SugarSync to sync Quicken data between my desktop and laptop for travel. 4 years ago I started paying. Then last month (April 17) I saw noticed it stopped backing up and syncing all my data. I called tech support who tried a couple of kludge fixes which failed. Finally on the third call I reached the tech with some knowledge of their product who told me that they do not do “active databases” including Quicken, my e-mail files etc. – sounds like the files I most want to back up since they change, and are “important” to protect. They do document this on their web site (“Data That Can’t Be Synced”) even though they have not given this info to tech support.
I cancelled and on uninstall saw the program date was also April 17, 2018. So if you have files that rarely change, OK. But if you have “active data” files, SugarSync has decided not to support them. FYI: Microsoft’s OneDrive is much cheaper and does back up all my data.