Want to live stream All Elite Wrestling: Dynamite online? We’ll let you know when this show is on, what to expect, and how to watch AEW: Dynamite from anywhere with a Virtual Private Network (VPN).
Ian Garland Streaming, Kodi and VPN Expert 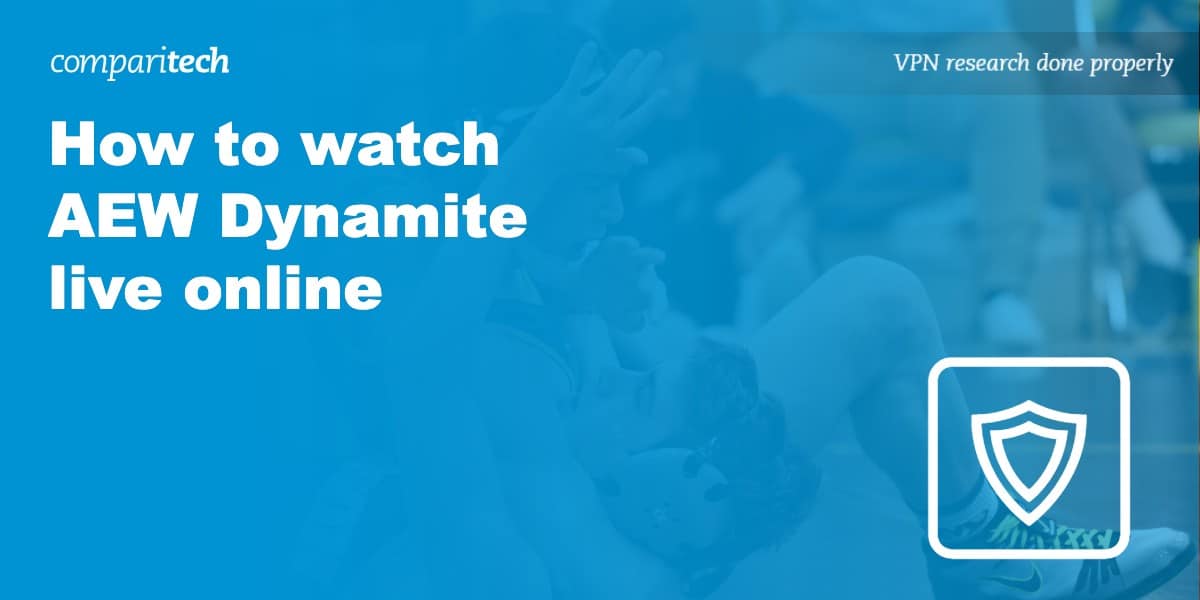 AEW: Dynamite will premiere at 8 PM EST (1 AM BST) on October 2, with a new, two-hour-long episode airing every Wednesday. This is good news for wrestling fans since it means Dynamite won’t clash with the WWE’s Smackdown or Raw shows, which air on Monday and Friday. Take a look below to find out how to live stream AEW: Dynamite from abroad (outside of the US).

You should note that we’ll only be recommending official sources. Given AEW’s popularity, it’s likely that unofficial streams will be available. However, these often only provide laggy, low-resolution video, and can be taken down at any moment for violating copyright. With plenty of legitimate ways to watch All Elite Wrestling: Dynamite online, there’s no reason to use unreliable, unauthorized streams.

This show will only be broadcast on geo-restricted platforms. This means that you’ll need a VPN to watch AEW: Dynamite abroad.

How to live stream All Elite Wrestling: Dynamite abroad with a VPN

Many platforms block users based on their location, determined by their IP address. A Virtual Private Network (VPN) sends your traffic through an intermediary server in a location of your choice. Your IP address is switched with one from that location, enabling you to bypass geo-restrictions. Follow the steps below to unblock and stream All Elite Wrestling: Dynamite from anywhere in the world using a VPN:

Here’s how to watch All Elite Wrestling: Dynamite from anywhere with a VPN:

As AEW: Dynamite will air live, it’s important you take a few minutes ahead of time to make sure your VPN is capable of unblocking TNT. This way, if you run into any issues, you’ll still have time to contact your VPN’s customer support team and might not have to miss the start of the broadcast.

How to watch All Elite Wrestling: Dynamite on US TV

All Elite Wrestling: Dynamite will air exclusively on TNT in the US. If your cable TV package already includes TNT, you can simply log in to the website and start watching right away at no added cost. But what if you don’t have cable or your provider isn’t supported? Don’t panic: there are plenty of ways to watch AEW: Dynamite without cable.

Currently, Sling TV, AT&T TV NOW (previously called DirecTV Now), Hulu with Live TV, PlayStation Vue, and YouTube TV all allow you to stream TNT live. We’d recommend using Sling TV, simply because at $15 USD per month, it’s the least expensive option. That said, all of the above services offer a free trial, so there’s nothing stopping you from trying them out and canceling before the trial ends to avoid being charged.

You should note that all of the services above are region-locked and only accessible in the US. However, you can log in and stream as normal while abroad by connecting to a US VPN server. Don’t have a VPN yet? ExpressVPN comes with a 30-day money-back guarantee, meaning you can watch AEW: Dynamite risk-free and claim a full refund if you’re unsatisfied.

Can I watch AEW: Dynamite from outside of the US?

There are rumors swirling that suggest AEW: Dynamite will air on ITV4 in the UK and TSN in Canada. However, despite the fact that the All Elite Wrestling: Dynamite premiere is fast approaching, AEW still hasn’t finalized deals with any international broadcasters as yet. In fact, according to the Young Bucks (who are Vice Presidents of the AEW) it’s still unclear whether a deal will be struck before the first episode airs.

If no agreement is reached, it’s possible that AEW: Dynamite will simply air on B/R Live and Fite TV, in the same way that AEW’s pay-per-views have. However, this is just speculation at the moment. We’ll update this post as more information becomes available.

What do we know about AEW: Dynamite?

Details are few and far between at the moment, but we do know that AEW: Dynamite will be rated TV-14 and won’t be shown live on the West Coast, instead airing at 8 PM PST. However, some streaming services (TNT, Hulu, and AT&T TV NOW) use an East Coast stream, allowing you to catch the action a few hours earlier than usual.

Can I use a free VPN to watch AEW Dynamite online?

You can use a free VPN to watch AEW Dynamite online, but you may not have the best experience. Free VPNs often use lackluster encryption compared to premium providers, allowing your ISP and internet snoopers to see what you're up to online. Additionally, free VPNs often impose a bandwidth cap which is likely to be used within minutes of streaming AEW Dynamite. Finally, a free VPN may restrict the number of server locations unless you upgrade to its premium version, so may not offer servers in the United States required to unblock services like TNT.

Is it illegal to watch AEW Dynamite with a VPN?

It's not illegal to use a VPN to watch AEW Dynamite, but it may go against the terms and conditions of the broadcaster. So long as you're not using a VPN in a country like China or Russia, where VPNs are prohibited.