How to watch AEW Revolution live online from anywhere

Want to watch AEW Revolution live online? We’ll explain everything you need to know, including who is fighting, when the event will take place, and how to live stream AEW Revolution from abroad (outside of the US).
Ian Garland Streaming, Kodi and VPN Expert 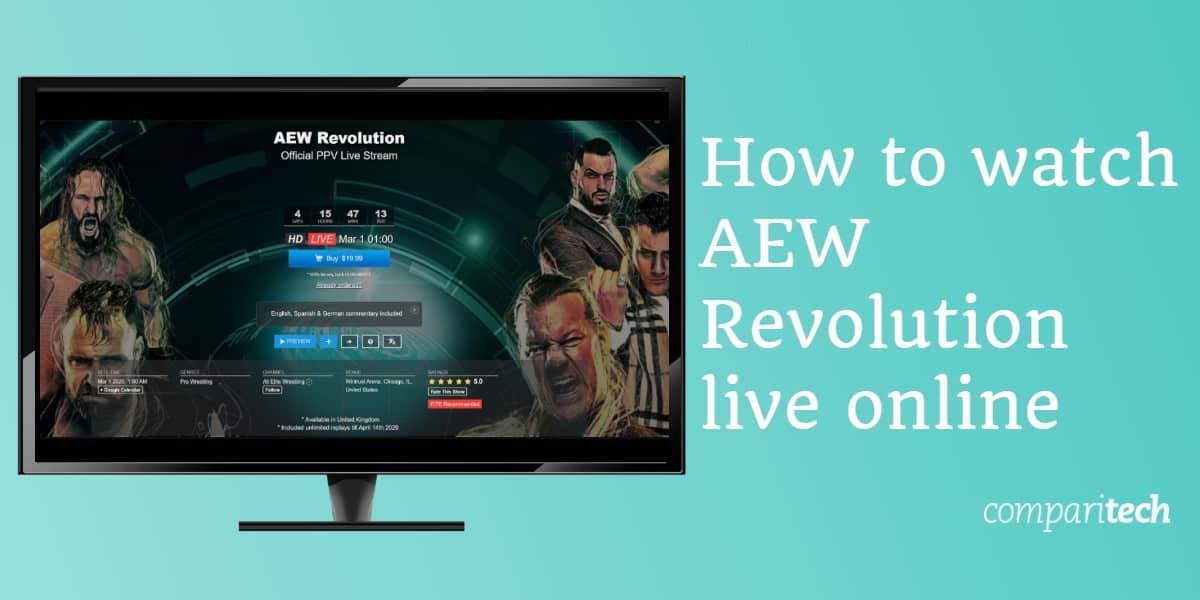 On February 29, All Elite Wrestling will descend upon the Wintrust Arena in Chicago for the organization’s first pay-per-view event of 2020: AEW Revolution. It’s sure to be an action-packed night, culminating in a World Championship match between Jon Moxley and WWE alum Chris Jericho. Read on to find out how to live stream AEW Revolution from anywhere, even if you’re abroad.

It’s important to note that we’ll only be recommending official AEW Revolution sources. Although unauthorized streams may be available, these tend to be unreliable, with low-quality video, plus they can be taken offline midway through for copyright violation. Luckily, this event will be shown in numerous countries, so there’s no need to use shady third-party streams.

AEW Revolution will only be shown on region-locked platforms. This means that if you’re traveling and looking to watch on the same services you use back home, you’ll need a Virtual Private Network (VPN).

How to watch AEW Revolution from abroad with a VPN

VPNs make it easy to access geo-restricted services from abroad. They replace your IP address with one from a location of your choice. Once connected, it’ll appear as though you’re browsing from the same country that your chosen server is in. Below, you’ll find a quick step-by-step guide to streaming AEW Revolution.

Here’s how to watch AEW Revolution live online from anywhere:

This is a pay-per-view event, so you really don’t want last-minute technical problems to stop you from watching. To prevent this, we recommend taking a few minutes and making sure your VPN works as expected ahead of time. If not, just get in touch with your VPN customer support team for assistance.

How to live stream AEW Revolution on US TV

Just like previous pay-per-view events, AEW Revolution will be available on B/R Live. Fans can choose to purchase an English or Spanish-language pass, but they’re both the same price at $49.99 USD. The broadcast is expected to begin at around 8 PM EST (5 PM PST).

While select titles are available to stream for free after airing, major events tend to remain behind a paywall for a considerable amount of time. For instance, AEW Fight for the Fallen only recently became free to watch, and that event originally aired in July 2019.

B/R Live is region-locked and only available in North America. If you’re currently traveling abroad, you can sign up and use the service as normal by connecting to an American VPN server. Don’t have a VPN yet? ExpressVPN offers a 30-day money-back guarantee, allowing you to stream this AEW Revolution risk-free. If you’re unsatisfied, just cancel during this period to get your money back.

Can I watch AEW Revolution from outside of the US?

Fite will be broadcasting AEW Revolution live across dozens of countries, including the UK, Germany, Japan, Australia, Ireland, Spain, and Brazil. To cater to as wide an audience as possible, this service will offer commentary in English, Spanish, and German. Interestingly, Canadian fans appear to be able to sign up on both B/R Live and Fite, with Fite being the more economical option. Its event pass costs far less than that of B/R Live at $19.99 USD (roughly £15 or €18).

This service is geo-restricted and its content availability differs from one region to another. For example, if you’re traveling in the US, you won’t usually be able to purchase an AEW Revolution fight pass. However, with a VPN, you may be able to connect to a server in your home country and save $30 using Fite instead of B/R Live.

Which wrestlers are expected to come out on top?

For many fans, the highlight of this event will be seeing two former WWE stars go head-to-head for the AEW World Championship. Chris Jericho has held the title for a significant period of time, though, so we wouldn’t be surprised if Moxley manages to take the belt this time around.

The winner of the Women’s World Championship match is less simple to predict, though, especially because Nyla Rose only recently became the champion. Statlander is a fan favorite, but if we had to guess, we’d say she’ll lose this match. However, this loss may well be used as a springboard for a new storyline (and a new title shot) sometime in the future.