We’ve put together a list of the top holiday movies by state based on the best Christmas movies according to Google (at the time of writing). As a twist on our usual review, this study focuses on the most popular movies from the last six years. 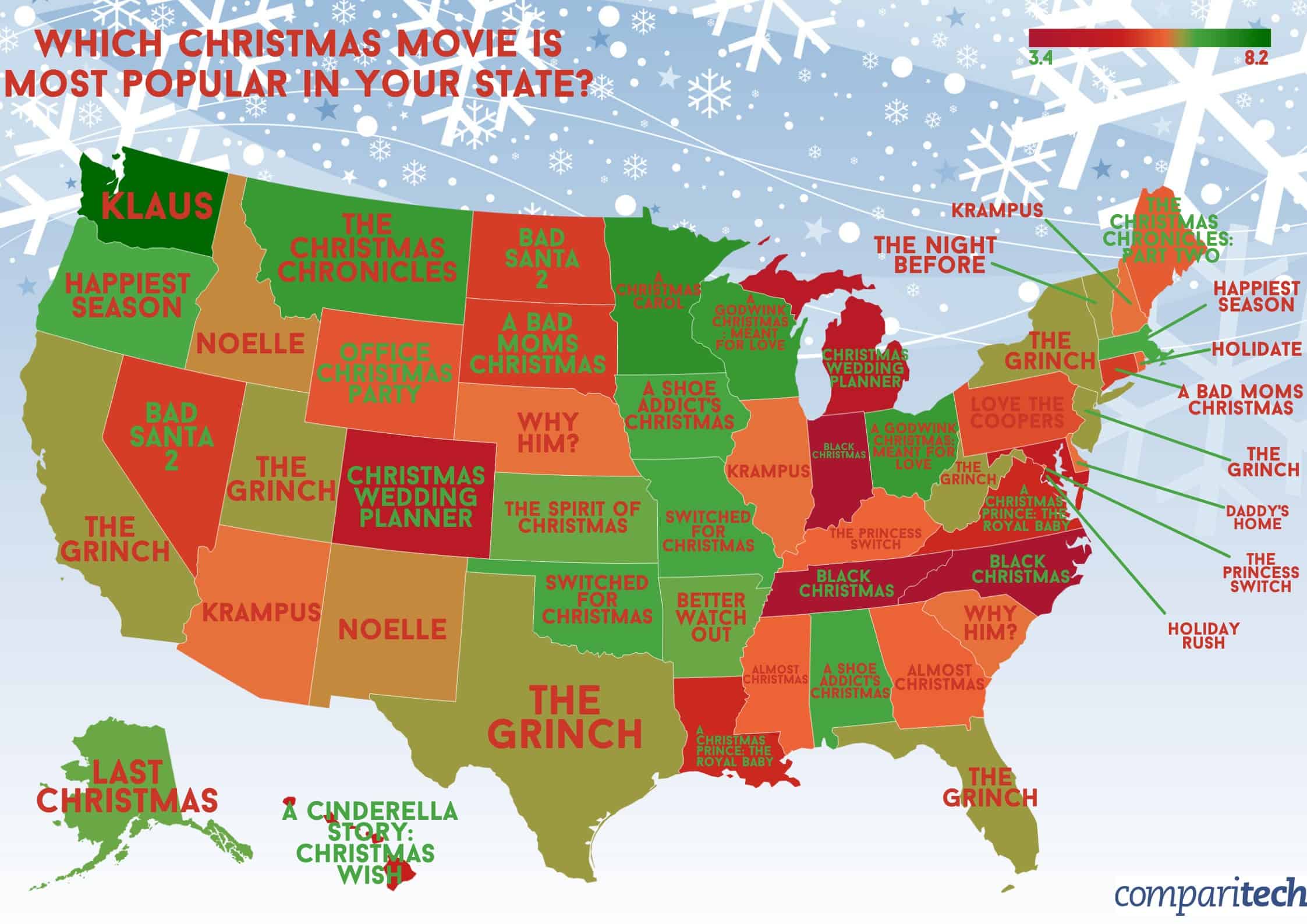 A number of states appear to be getting their festive fix from the latest animated family movies, such as Klaus and The Grinch, while others can’t get enough of must-see romantic comedies like Happiest Season and Christmas Wedding Planner. Others, however, are deviating from the “norm” with horrors like Black Christmas and Krampus.

Which states have the best and worst taste in Christmas movies?

According to IMDb ratings, residents in Washington have the best taste in Christmas movies thanks to their favorite — Klaus. Klaus is a 2019 animated Netflix movie about the unlikely friendship between a reclusive toymaker and a selfish postman who set about to deliver Christmas joy to a cold, dark town. With a score of 8.2 on IMDb, this is one of the best-rated Christmas movies of all time.

In stark contrast are residents of Indiana, North Carolina, and Tennessee. Their choice of Black Christmas scores a dismal 3.4 on IMDb. This 2019 slasher movie sees a masked stalker who targets a group of girls and goes on a mass killing spree. That is until the girls decide to fight back after finding out the killer is part of an underground college conspiracy.

Which states are the most and least festive?

Based on the popularity of searches for the movies within our list, Utahns are the most festive. Appearing 13 times within the top five, those in Utah don’t like to pass up on a good Christmas movie. But, there was one standout winner in the state — The Grinch. Other top favorites included Klaus and Christmas with a View.

The least festive states, however, were California, Florida, New Jersey, New Mexico, and Texas. None of these states appeared in the top five for any of the Christmas movies. However, all but New Mexico (which chose Noelle) agreed that their favorite movie is The Grinch (2018).

Using the best current Christmas movies according to Google at the time of writing, we searched each film individually on Google Trends to find which state scored the highest. This was then the designated film for that state. If any state came up twice, we used the film that ranked higher on Google Trends. If a state didn’t appear top for any of the movies, we searched through all of the 50 films to see which was most popular in the state according to Google Trends.

Movies where no data was available on Google Trends were omitted.