How to watch Dracula (BBC) online from anywhere

Looking for a way to watch Steven Moffat's Dracula online for free? Find out how you can live stream the new BBC Dracula from abroad (outside the UK).
Mark Gill TECH JOURNALIST, VPN AND PRIVACY SPECIALIST 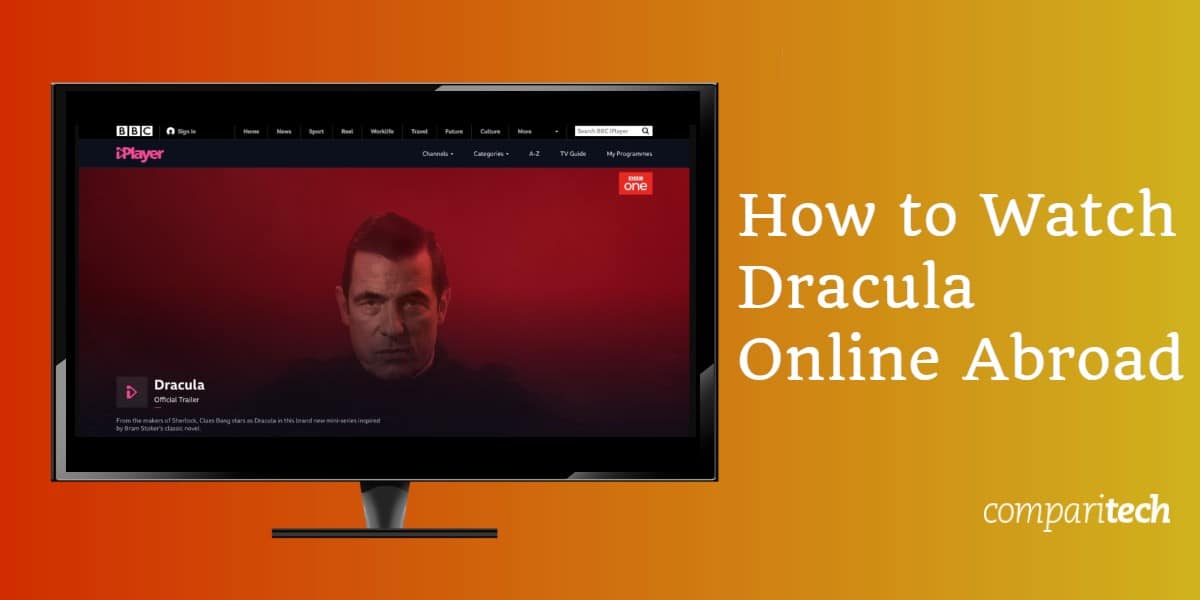 BBC’s Dracula will premiere on January 1, 2020, at 9 PM GMT (4 PM EST / 12 PM PST). The miniseries, written by Sherlock creators Mark Gatiss and Steven Moffat, will consist of three episodes to be broadcast on the first three days of 2020. While Dracula will air on BBC iPlayer and Netflix, both platforms are region-locked. This means you’ll need a VPN (Virtual Private Network) in order to watch online from abroad (outside the UK).

Please note that we’re only recommending official sources for watching Dracula (BBC). Although there’ll surely be unauthorized streams available, we don’t recommend them. That’s because they’re typically low resolution with lots of interruptions in the form of lag and buffering. What’s worse, unlicensed streams may be taken offline for copyright infringement. Besides, you can watch Steven Moffat’s Dracula online for free so there’s no need to risk unofficial sources.

Dracula will only be shown on geo-restricted streaming services. As such, you’ll need a VPN to live stream this miniseries if you are traveling outside the UK.

How to watch BBC’s Dracula online free with a VPN

The good news is that you can watch Steven Moffat’s version of Dracula online from almost anywhere in the world, so there’s no need to miss it if you are traveling. All you need is a VPN and to follow the simple steps laid out below.

Here’s how to watch Dracula (BBC) online free from anywhere:

How to live stream Dracula for free on UK TV

Dracula will premiere on BBC iPlayer on January 1, 2020. Fortunately, BBC iPlayer is free to watch which means you can watch Dracula online for free. While you’ll need a BBC iPlayer account, this is quick and easy to create and only requires you to provide some basic personal details such as a UK postal code (any UK postcode will be accepted).

It’s worth keeping in mind that BBC iPlayer is only available in the UK. However, it’s easy to unblock this streaming service from abroad with a VPN. Connecting to a server in the UK provides you with a UK IP address that will allow you to unblock BBC iPlayer from anywhere. Notably, ExpressVPN includes a 30-day money-back guarantee. As such, you can use it to live stream Dracula for free and receive a full refund if you’re unsatisfied.

Where else can I watch Dracula online?

While you can watch Dracula for free on BBC iPlayer, the mini-series will also be available on Netflix. However, the three episodes won’t be released on Netflix until January 4 — the day after the third and final episode will have broadcast on BBC iPlayer. Unlike BBC iPlayer, Netflix requires a paid subscription with plans starting from £5.99 ($7.99 USD) a month.

See also: BBC not working with your VPN – try this?

What do we know about Dracula?

Dracula is a three-part miniseries based on the gothic horror novel Dracula by Bram Stoker. From Sherlock creators Steven Moffat and Mark Gatiss, the series explores Dracula’s origins in Eastern Europe. It will air on three consecutive nights from January 1, 2020, described by the BBC as a “three-day reign of terror.”

The three 90-minute episodes are titled “The Rules of the Beast”, “Blood Vessel”, and “The Dark Compass”. The first episode is set in 1897 as English lawyer Jonathan Harker travels to Transylvania to meet his new client Count Dracula, who has travel plans of his own as he plots against Victorian London.

Who is the cast of Dracula?