How to watch One Day at a Time season 4 online

Traveling abroad and want to watch One Day at a Time season 4 online? Below, you can find out how to stream this geo-restricted show from anywhere in the world using a VPN.
Mark Gill TECH JOURNALIST, VPN AND PRIVACY SPECIALIST 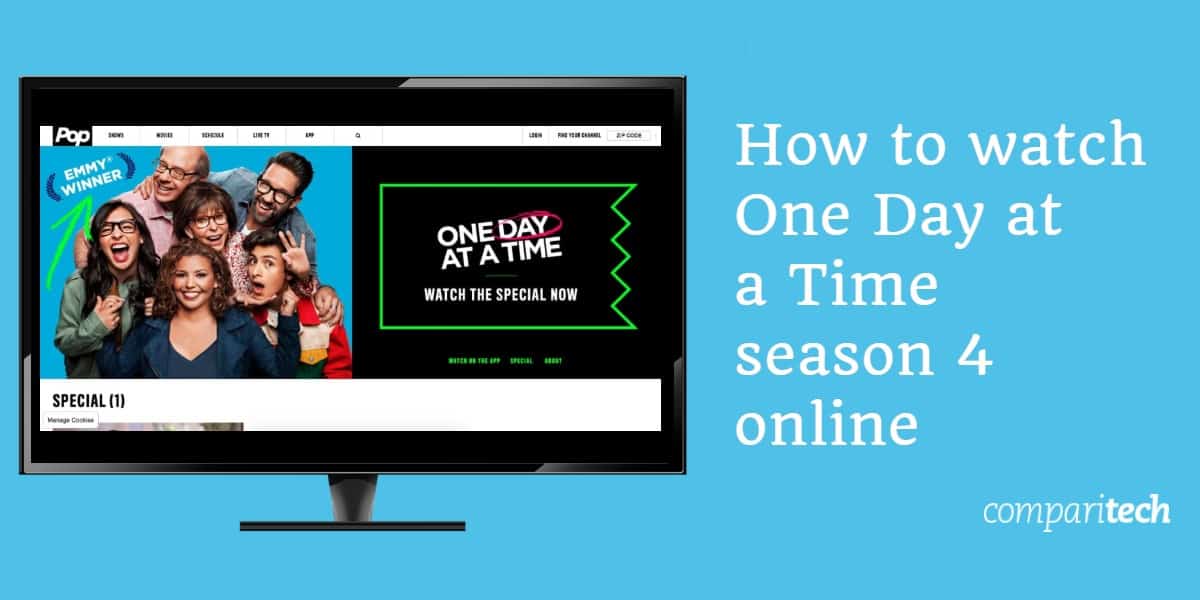 One Day at a Time season 4 is set to premiere on CBS on Monday, October 5 at 9 PM EST (6 PM PST). Canceled by Netflix after three seasons, the popular sitcom was picked up by Pop TV for a fourth season which initially aired on Pop TV in March. In order to watch the One Day at a Time season 4 rerun on CBS while traveling abroad, you’ll need a Virtual Private Network (VPN). That’s because CBS is region-locked and only available in the US.

Due to this show’s popularity, there’ll likely be unauthorized streams. However, we only recommend you use official sources for watching One Day at a Time season 4. The reason for this is that unlicensed streams often have low-resolution video, plus further issues like excessive lag and buffering. They can also be taken offline for copyright infringement. We’ll show you the best ways to watch so you don’t risk missing out on the One Day at a Time season 4 premiere.

You can use a VPN to change your virtual browsing location, allowing you to unblock geo-blocked content such as episodes of One Day at a Time. For example, by connecting to a server in the US, your real IP address will be hidden and replaced with a new, American IP address that makes it look like you’re in the US. An added benefit is that VPNs encrypt your internet traffic, providing you with greater online security and improved privacy.

Here’s how to watch One Day at a Time season 4 online from anywhere:

Season 4 episodes of One Day at a Time will air live on CBS. For this reason, you should test your VPN with CBS ahead of time. If you have any trouble, you’ll have time to contact your VPN’s support for technical assistance and potentially avoid missing out on the season 4 premiere.

You’ll be able to watch a rerun of One Day at a Time season 4 on CBS. If you have a US cable TV subscription, all you need to do is sign in with your TV provider. This requires you to enter your cable TV login details (an email address or username and password).

It’s important to keep in mind that CBS and the above streaming services are only available in the United States. To watch them abroad, you’ll need a US IP address. In order to get one, simply connect to a VPN’s US server. You can unblock CBS abroad with NordVPN which includes a 30-day money-back guarantee. If you’re unsatisfied, you can always request a full refund before the end of the 30-day period.

Where else can I watch One Day at a Time?

You can still find the latest One Day at a Time episodes on Pop TV which initially broadcast season 4 in March. If you have a US cable TV subscription, all you need to do is sign in with your TV provider. This requires you to enter your cable TV login details (an email address or username and password). Pop TV is also available cable-free via the following streaming services: FuboTV ($64.99/month) Hulu with Live TV ($54.99/month), and YouTube TV ($64.99/month).

It’s also likely that One Day at a Time season 4 will come to Netflix. At the time of writing, seasons 1-3 are available on Netflix as part of its American library. Netflix plans start from $8.99 while there’s also a 30-day free trial.

What can we expect from One Day at a Time season 4?

Like previous seasons, season 4 of One Day at a Time consists of 13 30-minute episodes. The first episode of the new season is titled “Checking Boxes” and is to premiere on CBS on Monday, October 5.

A sneak peek of the season 4 premiere on social media included a cheeky dig at Netflix which canceled the show after three seasons. Season 4 storylines include Penelope entering an unusual relationship and Lydia experiencing a religious crisis. Schneider’s relationship with Avery will grow deeper while Elena prepares for college and Alex starts dating.

Which cast members are returning for season 4?

Don’t worry, none of the cast members have been left behind in the switch from Netflix to Pop TV! This means that Justina Machado is back as Penelope Alvarez while Todd Grinnell returns as Pat Scheider. We’ll also see Isabella Gomez (Elena Inclán), Marcel Ruiz (Alejandro “Alex” Inclán), Stephen Tobolowsky (Dr. Leslie Berkowitz), and Rita Moreno (Lydia Riera). The season 4 premiere clip revealed that the show will guest star Ray Romano who plays the role of a census agent.