Would you like to stream True Detective online, for free? We’ll explain how to watch True Detective in the UK, or anywhere else in the world, with a Virtual Private Network (VPN).
Ian Garland Streaming, Kodi and VPN Expert 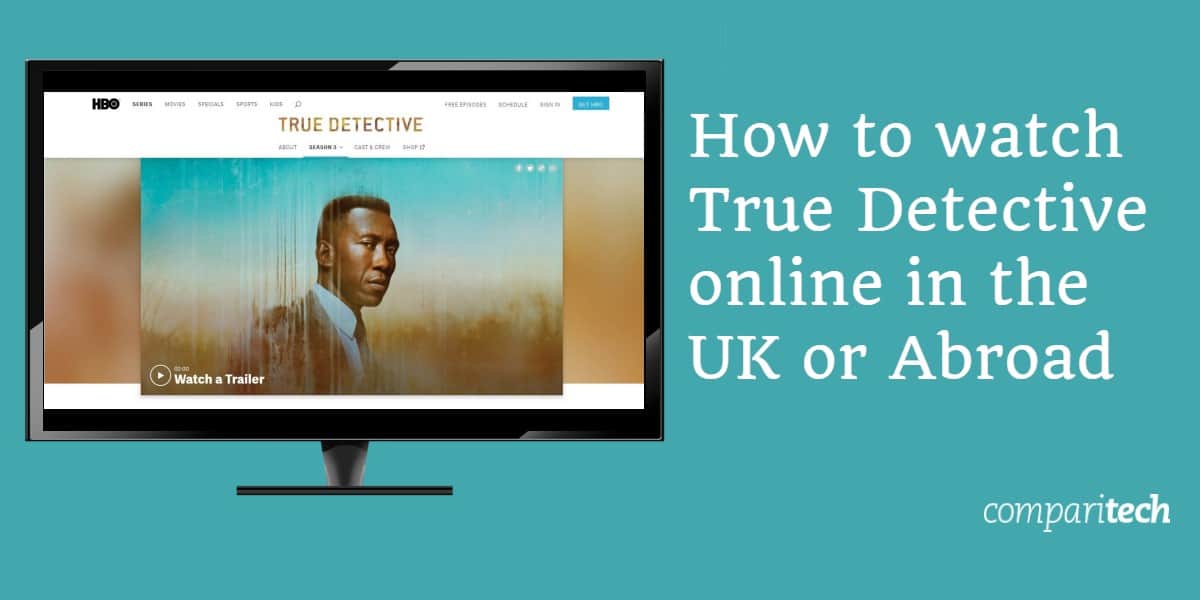 True Detective is one of the biggest shows of the last few years. However, while it was easy to watch during its initial release, it’s become harder to stream True Detective since the end of season three. Luckily, there are still a few streaming services showing True Detective and below, we’ll let you know how to watch every episode of True Detective online from the UK or wherever you are in the world.

You should note that we’ll only be recommending official sources. Although popular shows like True Detective are frequently available on shady streaming sites, we advise against using them. To begin with, the videos are often laggy and low-resolution. Further, they can be taken offline at any time for copyright violation, so you might not even get to see the end of the season. You can watch every season of True Detective for free anyway, so there’s no need to use unlicensed sources.

True Detective is only available on region-locked platforms, meaning you’ll need a VPN to watch it from abroad.

How to watch True Detective abroad using a VPN

VPNs can seem a little intimidating at first but once you know how to use them, it’s actually very simple to unblock geo-restricted services abroad. Follow the steps below to stream True Detective from the UK, the US, Canada, Mexico, or anywhere in the world:

How to stream True Detective on UK TV

Currently, no major streaming service in the UK lets you watch True Detective for free. However, you can purchase all three seasons on Amazon Prime Video and iTunes. Both platforms have the same price (£18.99 per season or £2.49 per episode), so there’s no benefit to choosing one over the other.

Usually, new episodes of True Detective are shown on Sky Atlantic, similar to most other HBO shows. This means that when season four is finally released, you’ll be able to watch it live on either Now TV (£7.99 per month) or the Sky Go app (free for existing Sky TV customers).

True Detective is only available in a handful of Amazon Prime Video and iTunes libraries. If you’d like to watch it from outside of the UK, you’ll have to connect to a British VPN server first. Don’t have a VPN? ExpressVPN comes with a 30-day money-back guarantee so you can stream True Detective risk-free. If you’re unsatisfied or only needed a VPN for this one task, you can just cancel and claim a full refund.

Where else can I watch True Detective online?

Luckily, several international streaming platforms carry all three seasons of True Detective. Take a look below to find out where to watch True Detective online in your country:

The easiest way to watch True Detective in the US is on HBO. If your cable TV package already includes HBO, you can sign in to HBO Go and start streaming all three seasons immediately. Don’t have cable? No problem: just sign up for HBO Now instead. This service usually costs $14.99 USD per month but it comes with a one-week free trial, so if you’re quick, you might be able to watch everything in time.

Alternatively, this show is included with DirecTV Now, Hulu (with the HBO addon), and Hotstar subscriptions. DirecTV, Hulu, and Hulu’s HBO addon all offer a trial period, meaning you can watch True Detective for free as long as you remember to cancel before the trial ends. If you’d prefer to own a digital copy of the show, you can purchase full seasons on Amazon Prime Video for $27.99 each.

All of the services listed above are geo-restricted. As such, you’ll have to either be in the US or connected to an American VPN server to use them.

In Canada, Crave is the only streaming service that currently allows you to watch True Detective seasons 1–3 online. The first two seasons are included with the base subscription, but to watch the third series, you’ll need the “Movies + HBO” plan. This costs $19.98 CAD per month, although your first month is free. There are only 24 episodes in total, so this should be more than enough time to finish the series. When you’re done, just cancel your account to avoid being charged.

Crave is region-locked and only available in Canada. To use this service abroad, you’ll have to connect to a Canadian VPN server.

Every season of True Detective is available on Foxtel Now. This usually costs $25 AUD per month plus an extra $10 for the Drama channel pack, but Foxtel Now offers a 10-day free trial, during which you’ll be able to watch whatever content you like. If you cancel before the trial ends, you can effectively stream every episode of True Detective free.

If 10 days isn’t enough time, we’d recommend keeping Foxtel Now for an extra month. Currently, the only other option is to purchase seasons individually for $21.99 on Fetch, so Foxtel actually offers decent value here.

Fetch and Foxtel are both region-locked. Further, Foxtel asks for an Australian phone number during registration, making it difficult for foreign users to sign up. Existing subscribers can still access these services abroad by using a VPN, though.

When is True Detective season 4 coming out?

Details are few and far between at the moment but we know that HBO isn’t currently working on season 4. That’s not to say we’ll never see it: Nic Pizzolatto, the show’s writer has said publicly that he has “wild” plans for a new season. At the moment, all we can do is wait to see whether or not HBO decides to renew the show.