YouTube is the largest streaming video website in the world. Here are over 25 unique YouTube statistics and facts that highlight its history, growth, and presence.
Sam Cook Data journalist, privacy advocate and cord-cutting expert 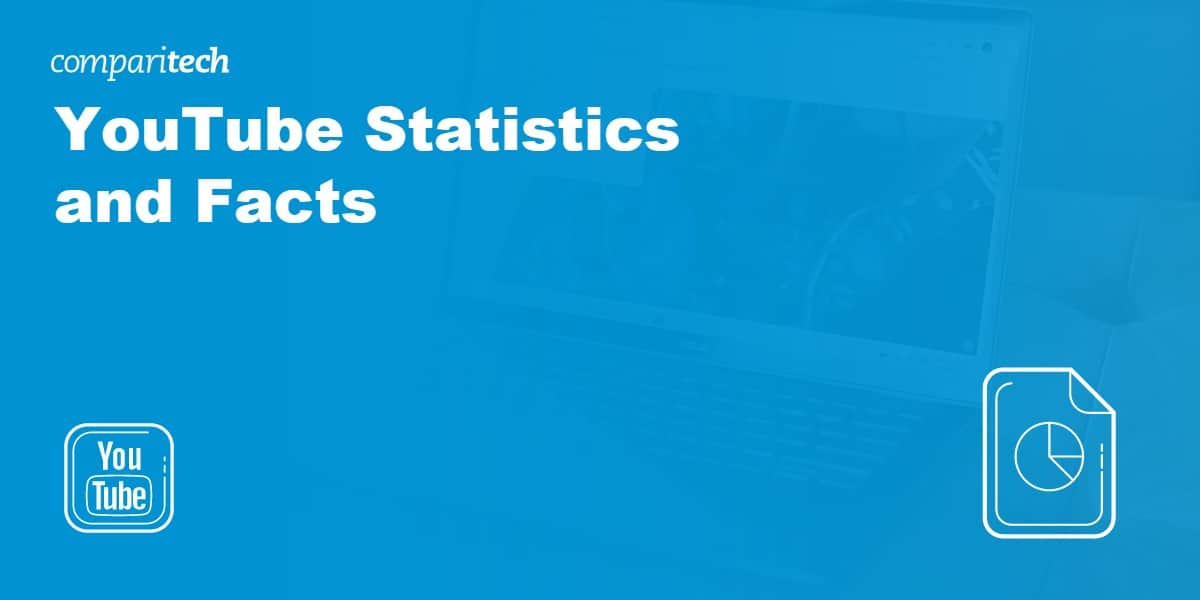 The largest streaming video website in the world, YouTube is now used by over 2 billion internet users every month—that’s around one-third of all people currently using the internet. YouTube has local versions in over 100 countries and 80 languages.

With such a large influence over the web, everything YouTube does is heavily scrutinized, and indeed most of what happens on the site is done on an exceptionally large scale. From the massive number of videos it hosts to the number of channels it removes each year, YouTube is hardly a website associated with small numbers.

With 2 billion users worldwide, it’s hardly a surprise that the YouTube website sees a ton of traffic. In fact, the only site that gets more visitors is that of parent company Google.

Things have changed since we first did YouTube statistics in early 2019. At that point, Facebook had more visitors than YouTube. In 2022, however, YouTube has firmly taken grip of the second place it has now been holding since late 2020.

2. Users watch over a billion hours of video per day

YouTube users view a whopping 1 billion hours of video each day. That accounts for around 5 billion YouTube videos being watched each day.

In January 2022, it is estimated that each visitor spends around 19:35 minutes on the site daily (up from 17 minutes in 2020 and 13 minutes in 2019). Those users visit approximately ten pages before leaving the site. Over 70 percent of YouTube content is viewed via mobile devices.

3. The most-viewed video has more than 10 billion views

Until recently, Luis Fonsi’s “Despacito” featuring Daddy Yankee was the most-viewed video on YouTube. However, in 2022 the infamous Baby Shark holds the top spot, with over 10 billion views. So, just how many views is Despacito trailing by? The video has had 7.7 billion views, which means it has fallen behind by over 2 billion views.

Last year, statistics from the Google Play Store showed that more than 5 billion users have downloaded the YouTube Android app. However, a little research actually revealed that it had  hit 5 billion mark in November 2018.

With this in mind, we speculated that YouTube may be well on its way to reaching the next milestone of 10 billion installs. So has it made it? Drum roll! The answer is yes! By 2022 YouTube has had more than 10 billion downloads, which means it has been installed on Android on more devices than the entire population of the world.

However, after a couple of years of being the most downloaded app on iOS, YouTube has finally been pushed off of the top spot. In fact, in 2022 is has slid to fourth place, after Zoom, TikTok, and Disney+.

5. T-Series remains the channel with the most subscribers

In 2022, T-Series, a film production company and record label based in India, remains the largest channel on YouTube in terms of subscribers (205 million). Technically, YouTube Movies and YouTube Music are in second and third place.

However, in terms of user-created content, Cocomelon – Nursery Rhymes and SET India are in second and third, with 127 and 125 million respectively. This marks a change for the popular YouTuber PewDiePie, who used to rank second, but in 2022 has slipped to fourth with 111 million subscribers.

6. In the US, WWE is the most popular channel

Based on the number of views in the US alone, WWE takes the cake. It has over 37 billion views and 52 million subscribers. Toy review channel, Ryan’s World, is a close second with more than 34 billion views even though it has far fewer subscribers (23 million).

A 2021 study by Pew Research Center found that more than three quarters of US adults use YouTube. A similar study from the year before revealed that 72% of those users consider it an important way of following the news. For contrast, that’s higher penetration than Facebook which is used by 66 percent of US adults.

When it comes to the age of users, the vast majority (95 percent) of 18-29 year-olds use YouTube. Usage drops a bit in older generations, to the point where only around 45 percent of those 65 and overuse the platform. That said, in 2020 that figure was just 36%. This reveals that older generations are slowly gravitating to the platform. 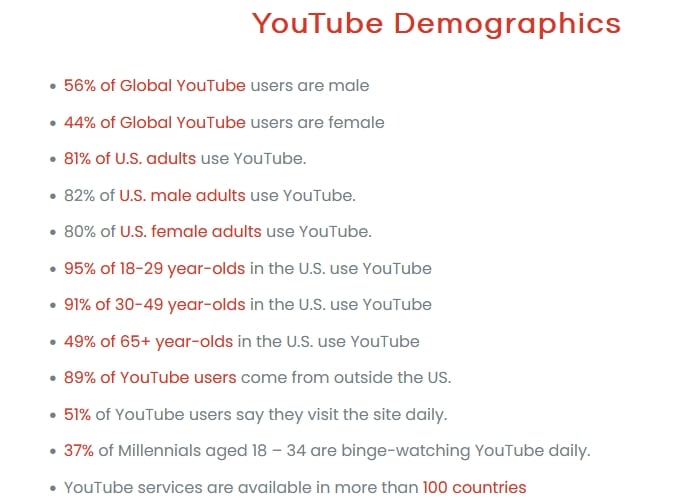 Consumers frequently use YouTube before making purchases. Around 80 percent of shoppers claimed to have accessed a video review on the site in the early part of their shopping process. YouTube users watched over 50,000 years’ worth of review videos in a two-year period.

Users are three times more likely to watch a YouTube tutorial video than deal with reading the instruction booklet that accompanies a product.

10. LEGO has the most popular brand channel

LEGO is one of YouTube’s biggest massive content producers. Although it doesn’t compare to some of the most popular influencer channels, it is the most popular brand channel. In 2022, LEGO has over 13.75 million subscribers and its videos have amassed nearly 17 billion views.

11. More than 80 percent of YouTube users live outside the US

While the US does account for the largest portion (15.6 percent) of YouTube’s visitors, that portion is still relatively small. Behind the US is India, accounting for 9.9 percent and then Japan, which accounts for 5 percent of users.

13. YouTube generated $7 billion in ad revenue in a single quarter of 2021

YouTube is now a giant ad revenue machine, thanks in no small part to Google Adsense incorporated into videos and YouTube’s use of autoplay. The 2020 Q4 total was up 46 percent over the previous year, to a total of $6.89 billion in profit.

In 2021, this record is set to be shattered because the company is thought to have earned over $7 billion in ad revenue in Q2 alone. According to analysts, it is expected that the company may have had total year-on-year increases of around 83%.

14. The Content ID system pays billions of dollars to creators

YouTube allows content creators to monetize any of their content that exists on the platform (whether they created the videos using their content or not) thanks to YouTube’s Content ID system. By November 2018, the service had paid out over $3 billion through the system. The real number is much higher, though. In fact, it was previously stated that YouTube actually pays creators around $8 billion per year.

In 2022, the latest figures reveal that YouTube has paid content creators over $30 billion in the past three years, which shows that creators have been earning around $10 billion per year.

In 2020 the young star of the channel Ryan’s World (previously Ryan’s ToysReview) earned millions by reviewing toys and delighting his subscribers. With the help of his parents, he earned $29.5 million and topped the list of highest earners. In 2021, Ryan Kaji dropped to 7th overall.

The above three stars along with seven other top earners netted a whopping $304 million. Aside from one of the children, all other top ten earners are men. Interestingly, only two earn their keep by posting gaming videos, down from five in 2019.

In 2007, Viacom filed a lawsuit against Google for allowing copyright infringement on the YouTube platform. The case was eventually thrown out, although defending the lawsuit cost Google upwards of $100 million. 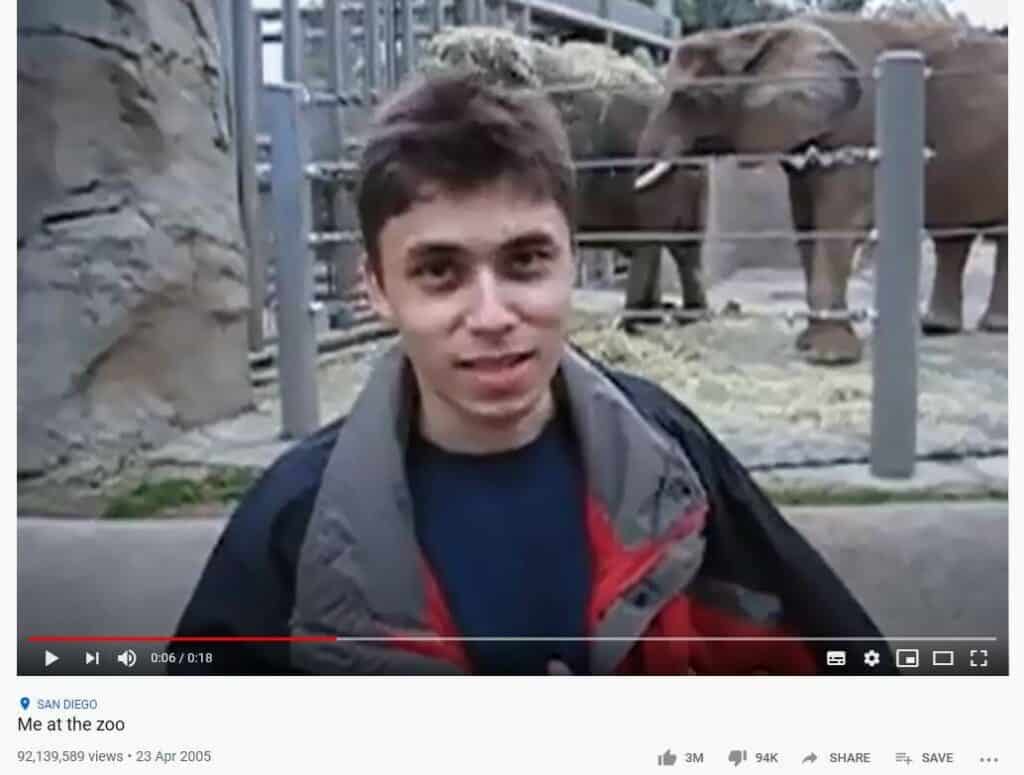 YouTube’s early version failed to inspire. Co-founder Steve Chen revealed at a 2016 press conference that on initial launch, YouTube had the tagline “Tune in, Hook up.” It was designed to provide people with a way to upload videos in a quest to find their dream partner. However, the idea never took off, even after the team offered to pay women $20 each to upload a video.

The site kept its original logo from launch until 2011. Even then, only very minor tweaks were made and the logo’s design didn’t change much until 2017.

21. YouTube initially launched with no limit on uploaded video length

However, the site instituted a 10-minute limit in 2006 to manage issues with copyright infringement. YouTube’s current upload limit is 15 minutes, with a longer limit allowed for accounts that show they can follow YouTube’s community guidelines. The maximum upload limit for those accounts is 128GB or 12 hours, whichever one is less for the video.

YouTube mainly relies on automated flagging to decide which videos to remove, but a large number of videos are flagged by users or members of the “Trusted Flagger” program. Automated flagging is particularly important as it means videos can be removed before they are viewed.

In Q4 2020, an even larger number of videos (over 9 million) were taken down.  The main reason for video removals was “child safety” which accounted for 41 percent of removed videos. 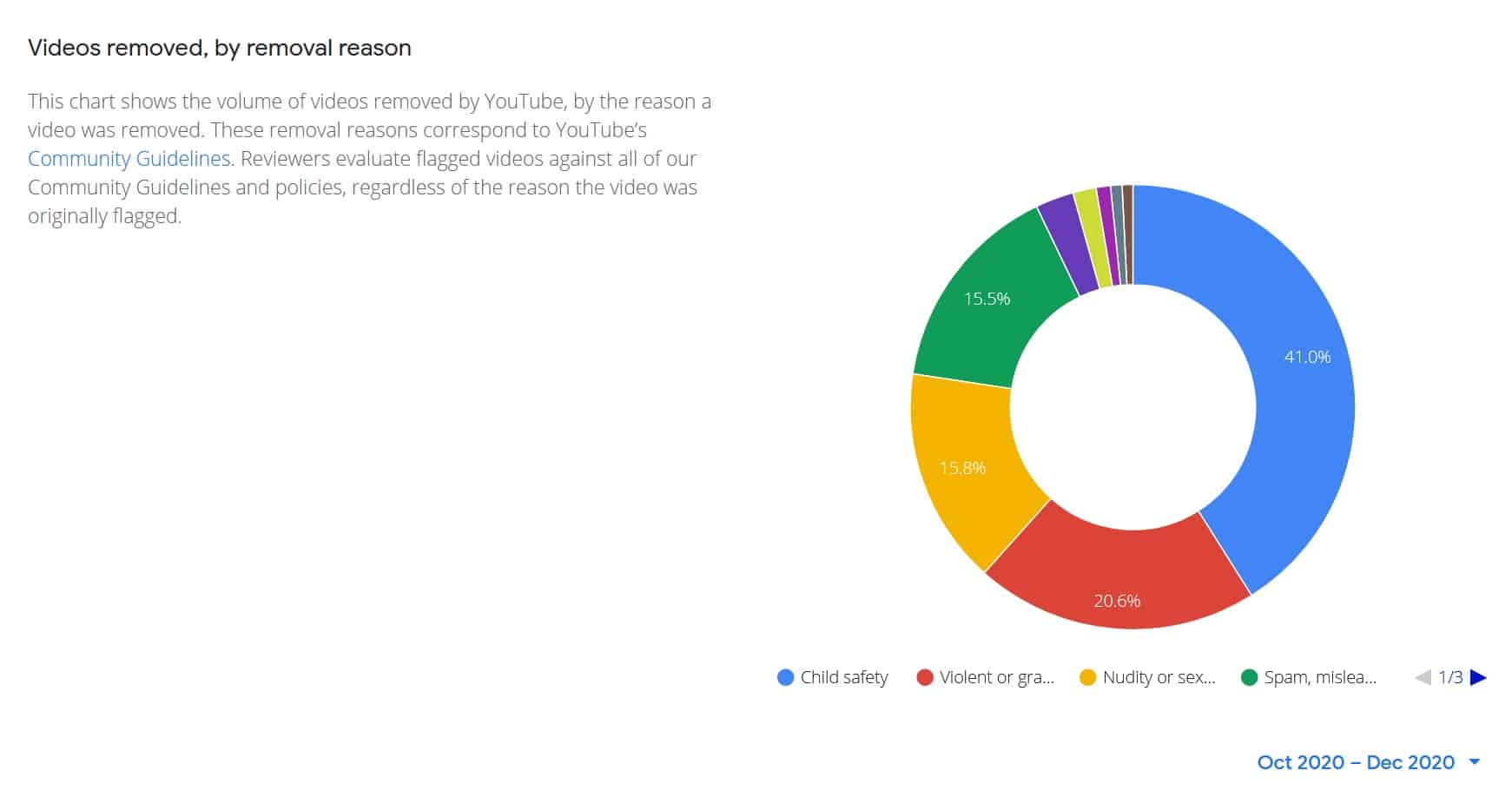 YouTube polices comments as well, and removed a staggering number in a three-month period. The vast majority of these (more than 99 percent) were removed by automated flagging.

As well as individual videos, YouTube takes down a surprising number of channels. 77.3 percent of the channels removed in Q4 2020 were deemed “spam, misleading and scams.”

28. India is the largest advertising audience

Hootsuite’s Global State of Digital 2022 report found that YouTube viewers in India account for the most significant advertising reach globally, with 467 million targeted users. In second place was the United States, with 247 million users.

Statista shows the astounding ad budgets available to the streaming giant in 2021. The figure is up 46% from the previous year and will likely increase with businesses investing ad spend into the platform.

Hootsuite reports that males over 18 years old spent the most viewing time on YouTube in 2021, totaling 53.9% of users. In contrast, people identifying as female accounted for 46.1% of viewers.

Yes, YouTube content can have geo-restrictions. Depending on the video creator, they may set a geofence only to allow certain countries or regions access to their content. YouTube also enforces its own regional restrictions based on copyright laws and local regulations. For example, some videos may be blocked in certain countries due to copyright claims from the copyright holders or due to local laws.

If a video is blocked in your region, you can still access it by using a VPN service to change your IP address and appear as if you are located in an allowed area. However, we advise caution when attempting this and suggest checking local laws.

Additionally, some videos may be blocked due to age restrictions - for example, videos with mature content will not be available to viewers under 18. Ultimately, it is the video creator's decision whether or not to impose geo-restrictions on their content. If you're unsure if a video is blocked in your region, we recommend contacting the video's creator directly for more information.